We left Paso Robles a month ago and stayed along the Pacific Coast to stay cool. There are still no air conditioners available for the MotherShip. We have checked every web site across the nation including those that friends have recommended. No problem, the coast is cool. 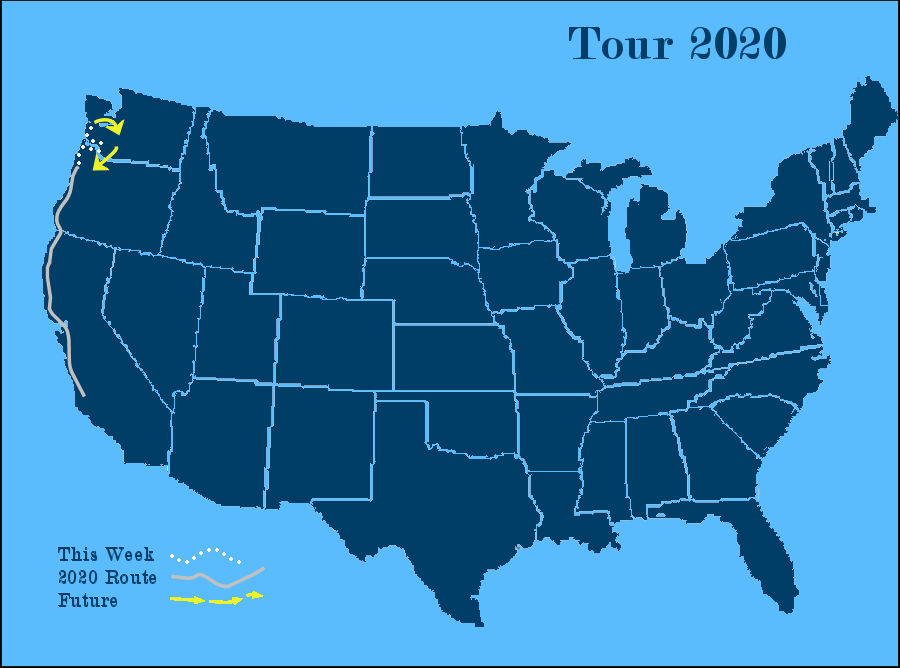 This week's route from Tillamook, Oregon to Raymond, Washington. 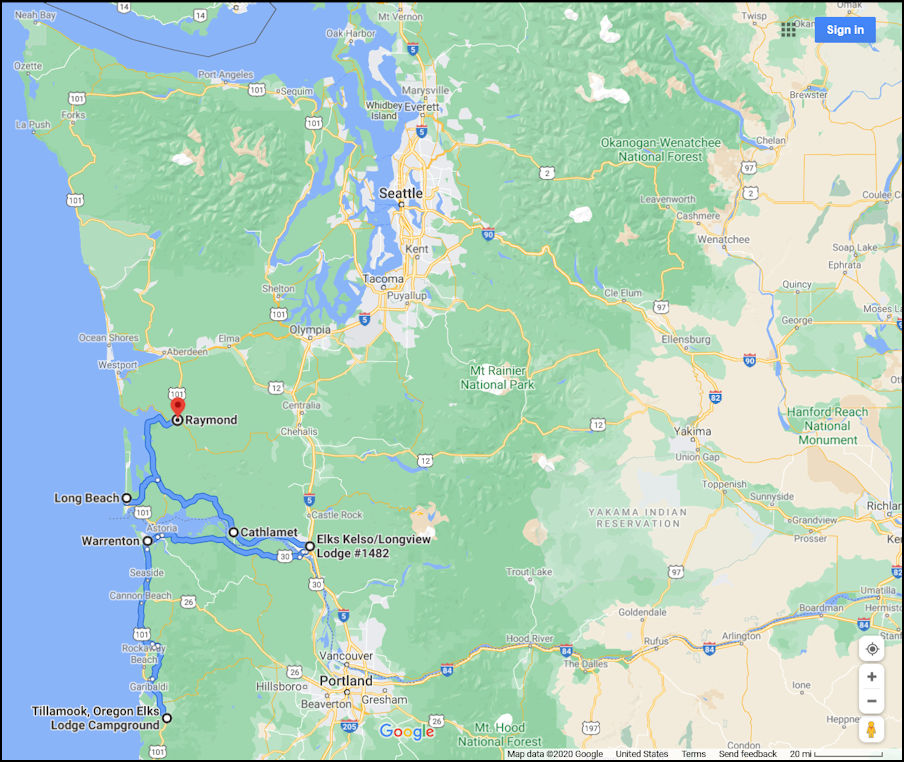 Three weeks ago Frank and Janice joined us in Eureka, California. They were trying to get out of the smoke. They did and then they went home. We had not seen any smoke up to that point on this trip. In Tillamook, high winds attacked us and later you could see a smoky haze to the south. Fine, we are moving north toward Astoria. 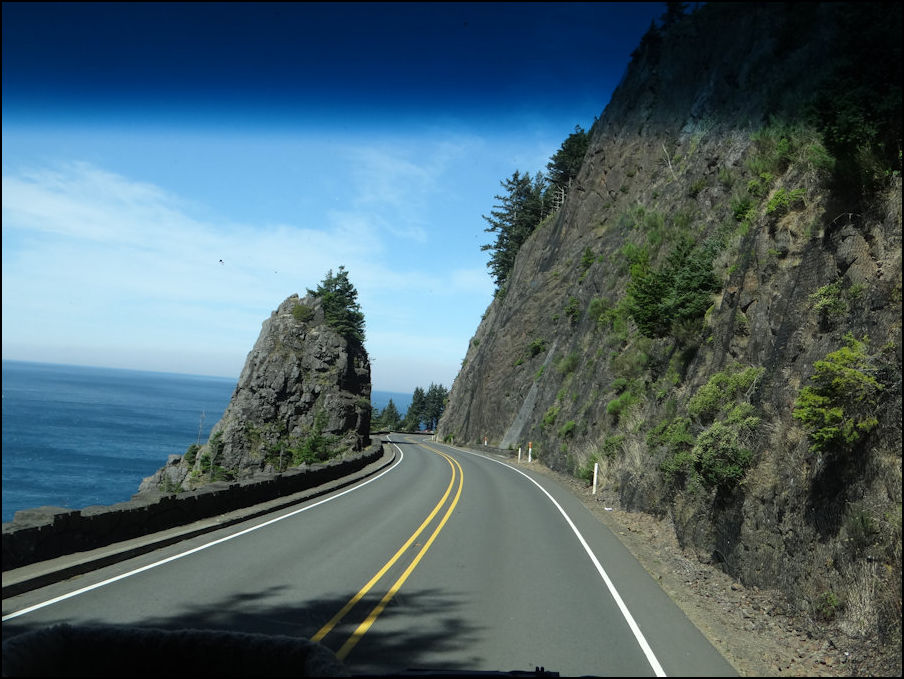 Passing Seaside, Oregon on the 101 we cruised by the High Life Adventure Park. 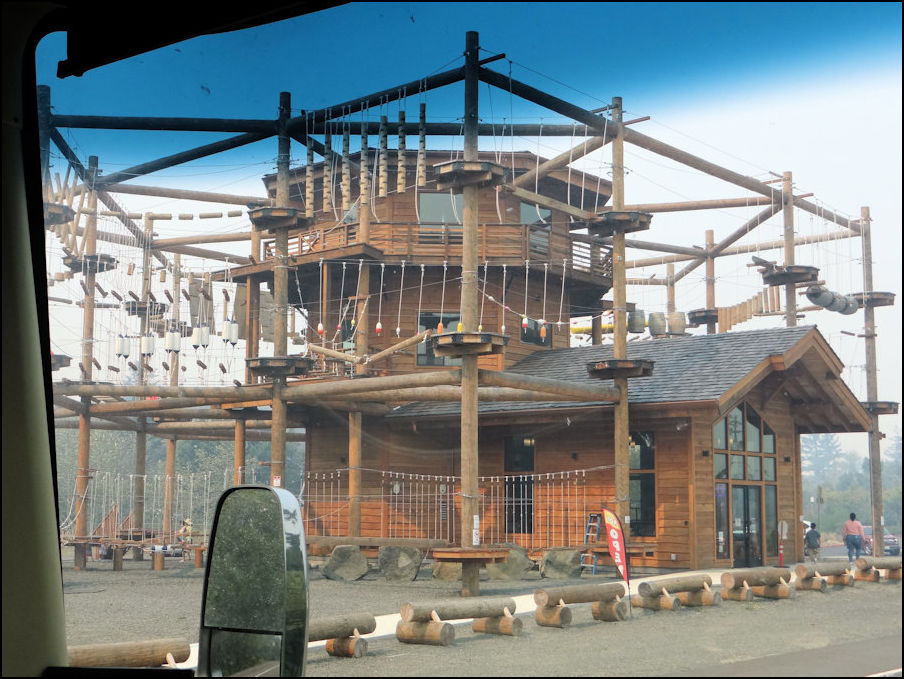 We stopped at the Fort Stevens State Park. "No walk-ins, reservations only." The park has 9 miles of bike trails that we would have loved. But, the RV sites are much closer than they appear on the web site. And it is covered in trees which would make for cool days and chilly nights. We moved on across the Columbia River into Washington. We were going to get a week at Brookhollow RV in Kelso, WA. However, we followed our general rule of always getting one night and see how you like it. It is good that we did because as we arrived in Kelso, the smoke had finally reached us. Settling in for the evening, we took no notice of the white Alpha SeeYa motorhome on the right.

But, they noticed us. It is Lauren and Jeanette, whom we met in August 2008 at the Westminster, Colorado Elks. We have met them since 8 times! Colorado, Arizona, Kentucky, Tennessee, Avila Beach and now in Washington. What a blessing! This time Lauren's 93 year young mother Beverly was along for the ride. 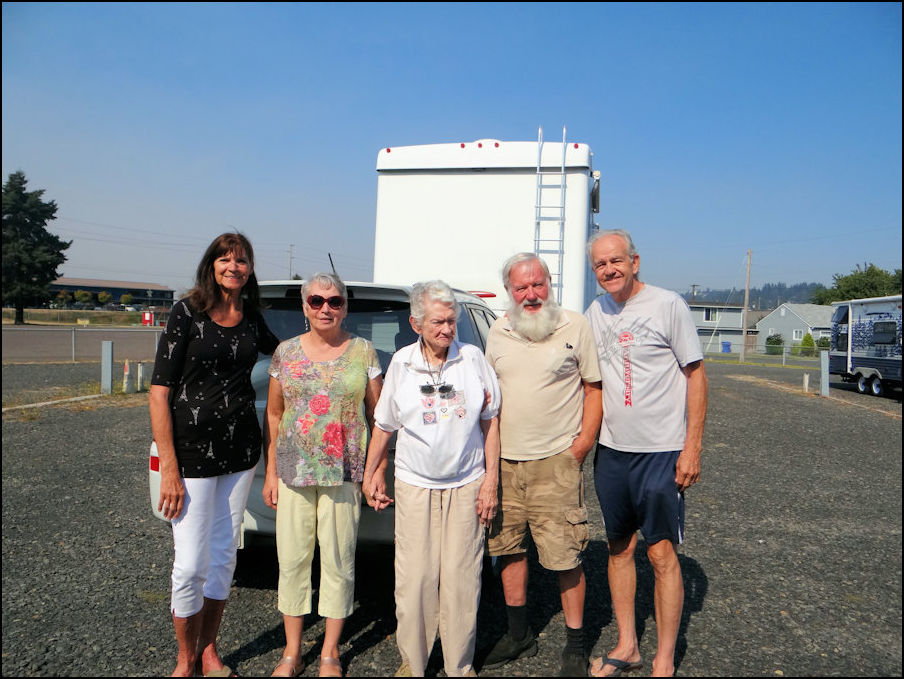 Now that the smoke has caught up with us, we needed to learn how to find air that is bearable. Researching weather maps, we determined that we needed to head back to the coast. We found County Line RV Park in Cathlamet, WA. We had the park to ourselves; just us, Mandy and the smoke.

The air quality was rated at 213 Very Unhealthy. But, it was the best we could find without heading hundreds of miles to the east. It looks hazy but Pete barely smelled the smoke and Ellen stayed inside with nice views of the Columbia River. Mandy had free run of the park and gave our site 5 Woofs. 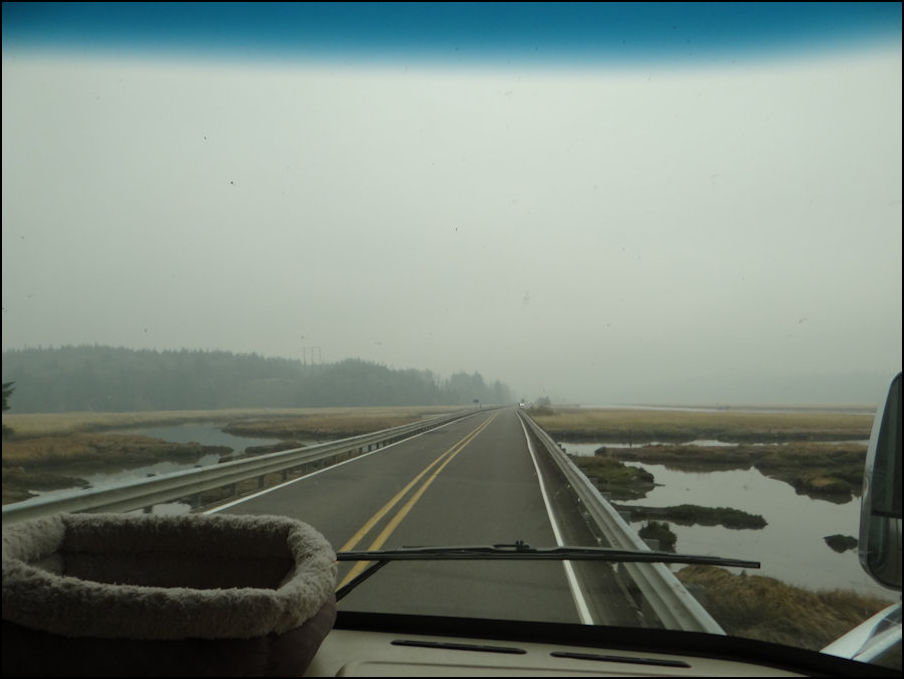 Arriving at the Elks dry camping area, we learned it was Long Beach's annual Rod Run to the End of the World. This year's event was canceled but that did not stop hundreds from showing up. Dry camping is not allowed during the Rod Run but we found this parking stop just one block off the main drag. We walked a few blocks to enjoy this canceled event. 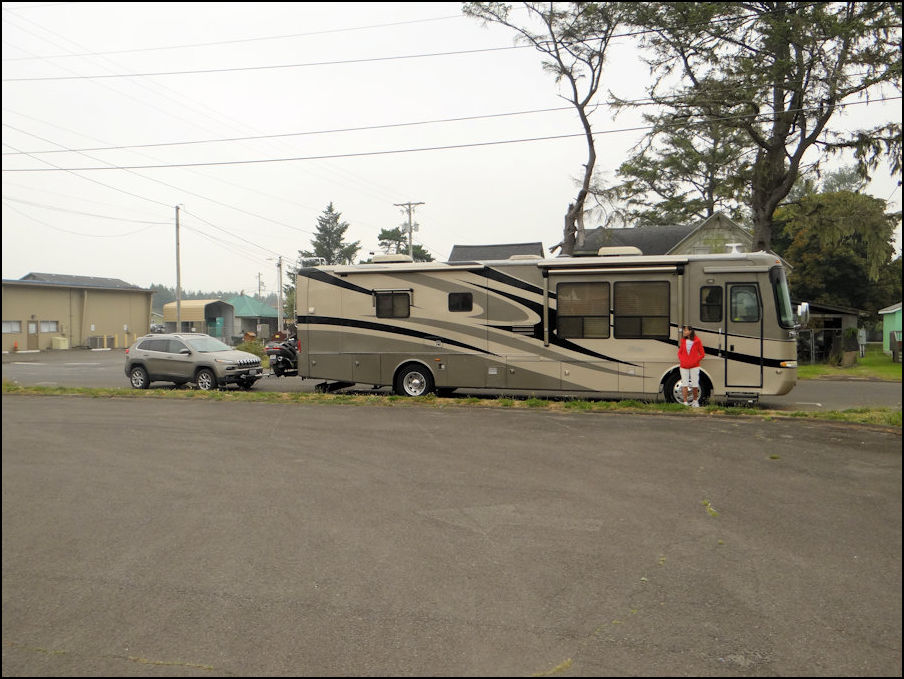 Taking a break, we had some of Castaways Award Winning clam chowder.

Note to Ben, it was excellent! 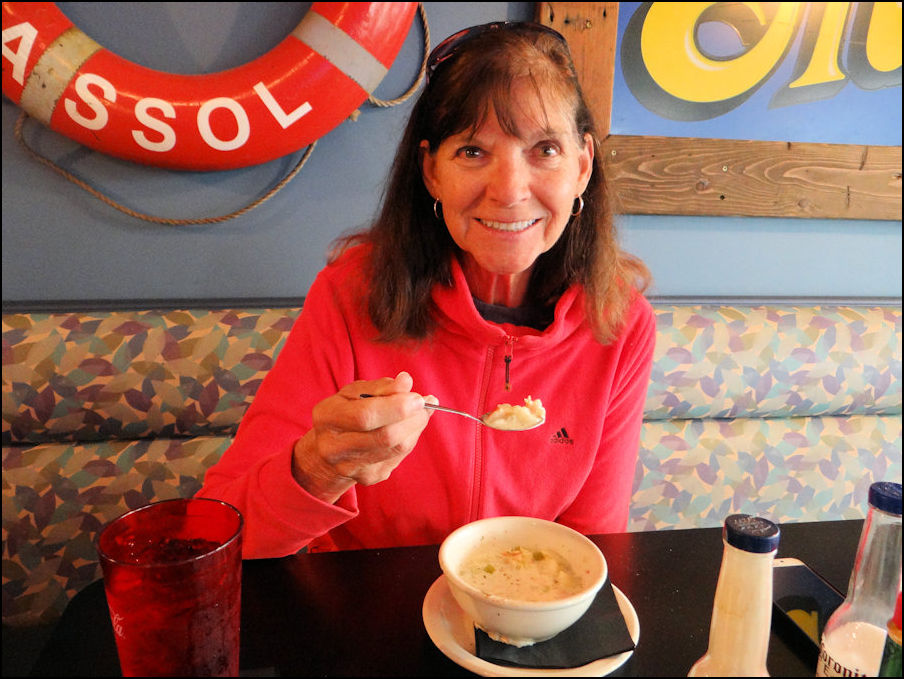 1) Another El Camino? No, a GMC Sprint. Who knew? Probably Don.
2) A second rat rod and
3) This lady joins in with her favorite rod.

1) On our way out of town in the afternoon more rods are on the way.
2) Goose Point Oysters, not a small operation. South Bend, Washington claims to be the oyster capital of the world.

Arriving at Raymond, Washington, staying at the Raymond RV and Marine. Nice view of the Willapa River, if you could see it. The RV park is a side business on the property of the Pedigree Catamarans, Inc. company. 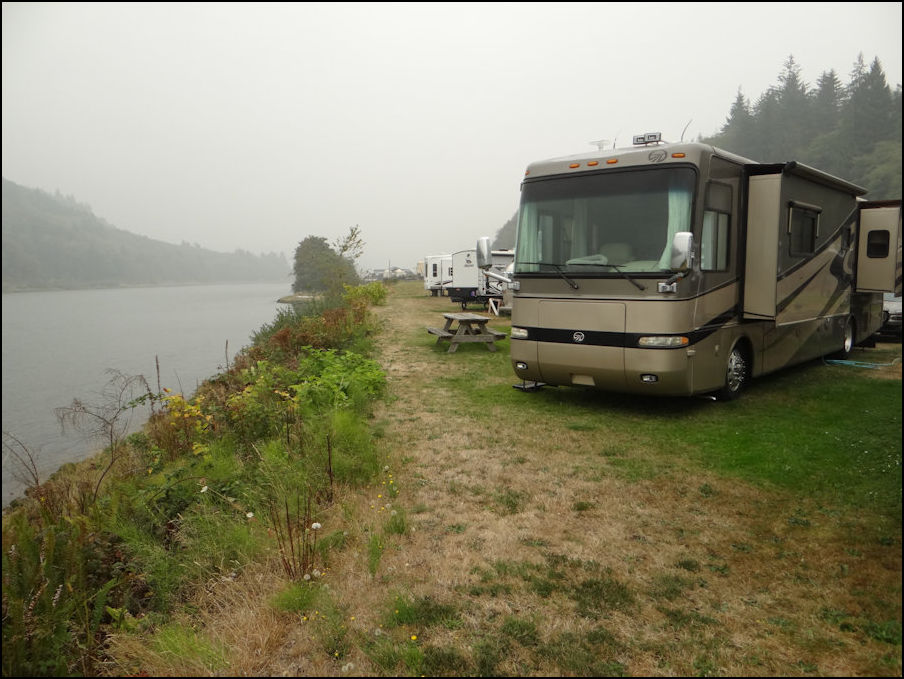 This work in process is 86 feet long and 42 feet wide. It has two crew quarters and four staterooms, all with private bathrooms. This can be yours to have it completed per your directions. The 2,000 gallon diesel tanks and twin Yanmar engines can propel you along at 21 mph. Come and get it! 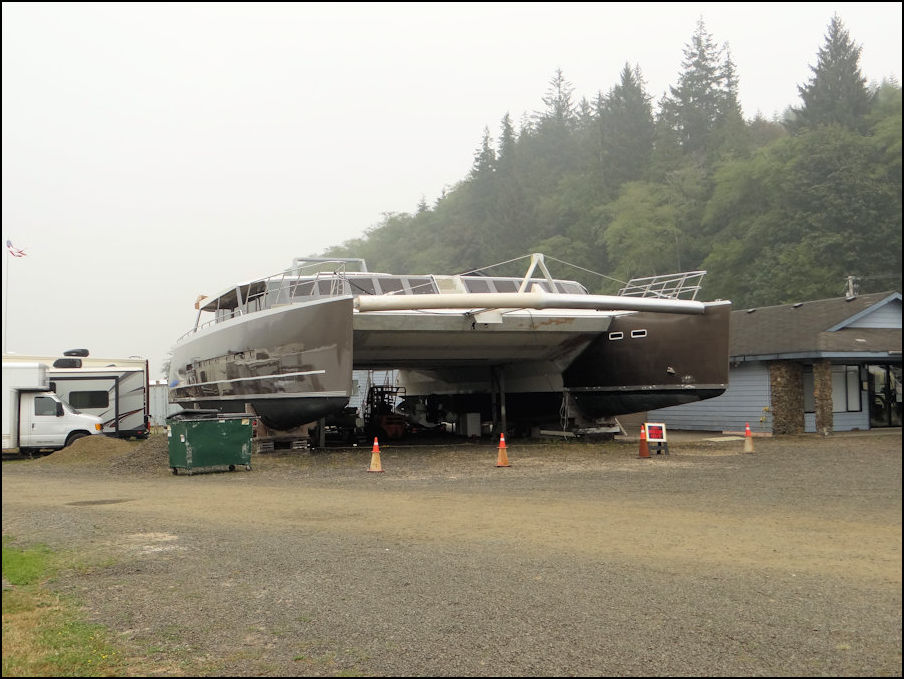 Inside the large gray building is another catamaran as seen through the door on the right. It appears to be about 35 feet wide and 60 feet long (a guess). And the building has no end door! When finished the temporary building will be moved; the end wall will be torn down; the boat will be towed out; wall replaced ready for the next boat. Kelly, the owner, has been involved in boat building for 37 years and she knows what she is doing. Impressive!

So what about the smoky air. Yes, we learned this week that air is smoky not smokey. "Do you know Smokey the Bear's middle name?" Smokey's official name is Smokey Bear; Smokey has no middle name. Just like the singer is not Smokey the Robinson.

We learned a lot this week. Hopefully next week we can learn what fresh air smells like.