Meet Lauren and Jeanette (we did!)


Lauren and Jeanette are Yachtees.  Just a couple of days after the Mattson wedding in Avila Beach, Lauren called us from there.  He said, "Hey, Pete and Ellen, we're at Avila Beach in our motor yacht.  Do you wanna come for a visit?".  So we did.  Here they are in front of the Custom House. 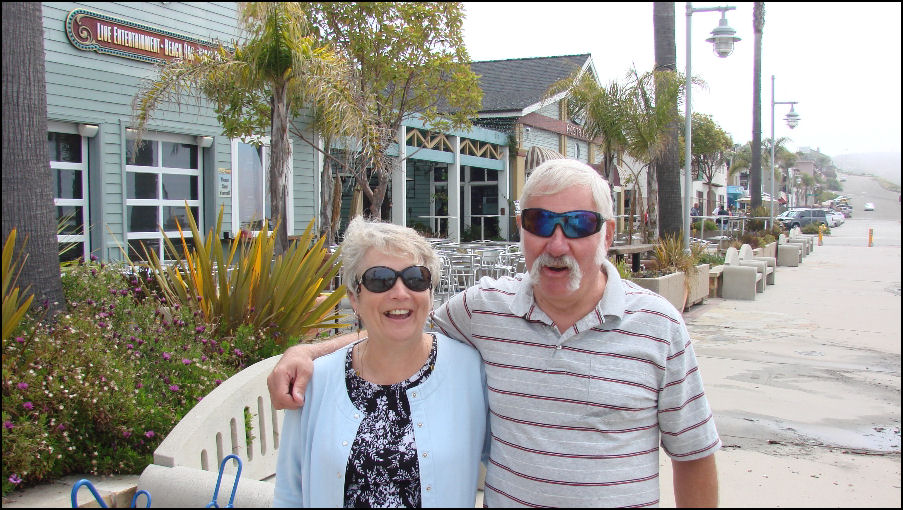 And this is their 57 foot Californian, three bedroom, three bath yacht. "Did we want to go for a ride?" You, bet! 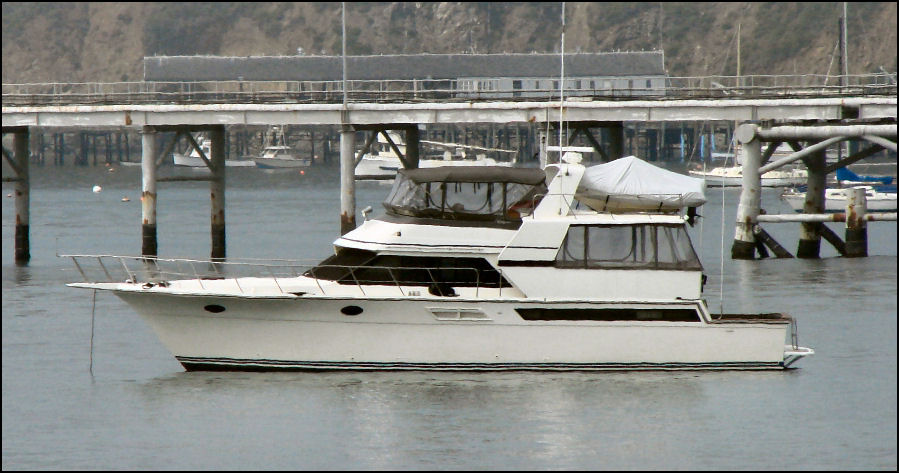 We walked out to the end of the Avila Beach pier and met the water taxi.  The ride to the yacht was only a hundred yards and these boys appreciated Lauren's $20.

Captain Lauren and his copilot Jeanette set out on a 3-hour tour.  Ellen seems to like it.

This beautiful ship has a full bath in each of the three bedrooms.  This living area is a couple steps over the kitchen/dinette. The stern of the vessel has a spacious "card room" that is enclosed but can be opened to the ocean air.  The Californian is powered by two 550 hp Detroit Diesel engines.  While the only yachting terminology we could speak was "Arrrrrrrr Matey", this craft really is just a floating motorhome with all the amenities and functions we are used to.

After a wonderful tour, a card game of Hand and Foot and great hospitality, we headed back to the pier.  Pete flexes what used to be muscle as he fights the wind. Lauren rowed most the way to the pier and all the way back to the true Mothership.

Jeanette powered her way to meet Lauren and get him back on board.  And they were once again afloat on the quiet sea.

As we left Avila, having a marvelous time with our friends, they left us behind with this message. 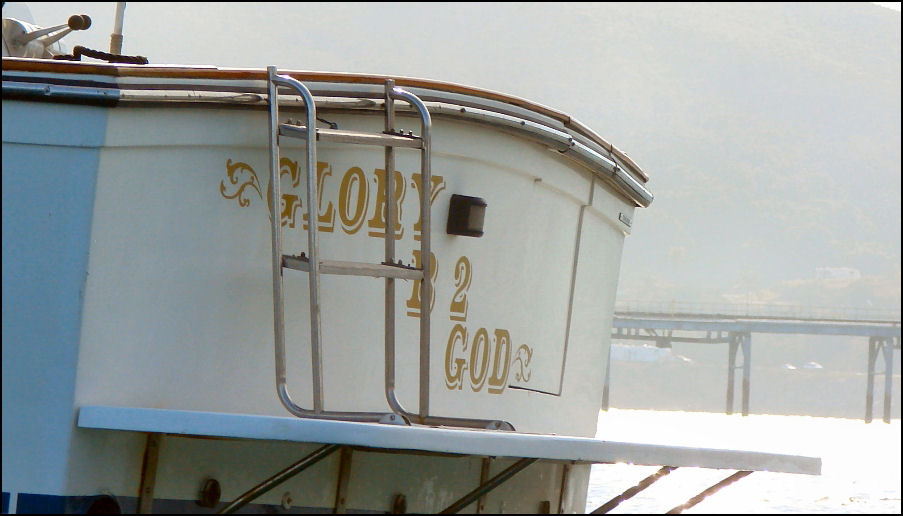 Lauren and Jeanette are on-fire Christians and minister everywhere they go. They shared with us many stories of how the Lord has been glorified in the places that He has put them.

So, how is it that they called us to meet them in Avila Beach?  It all began one dark night in August 2008 in Westminster, Colorado.  We don't like to drive at night, but we just pulled out of a service center in Westminster and headed to the Elks.  As we were backing into our site, a gentleman came running over to us to help.  That was Lauren. No, not the camp host, just a man of service, determined to assist us.

Places we have met back up with them: 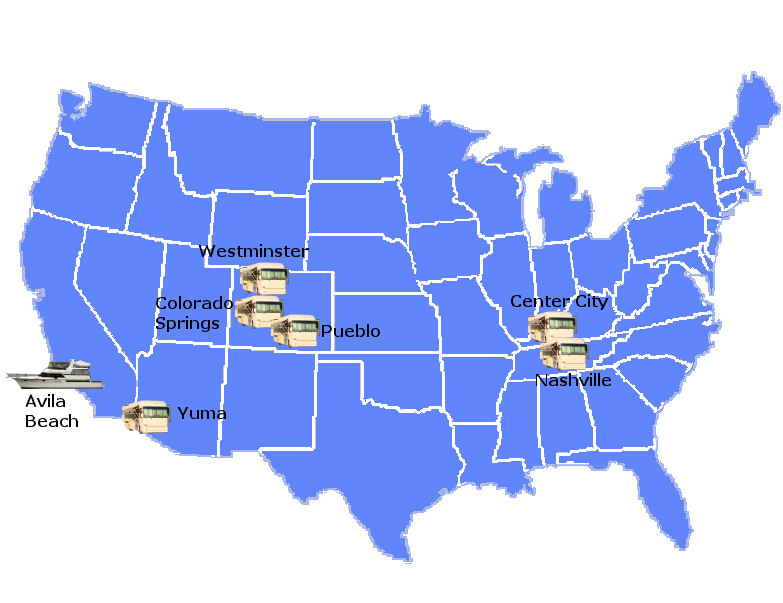 The next morning, Ellen went over to thank Lauren and Jeanette and that's were our friendship began.  It wasn't hard; we are both full-timing families, Christians and bikers.  We stayed a few minutes with them, thanked them and went about our way.

1) Then on to Breckenridge, CO, a very posh winter ski resort, but also a great place to be in the summer.   2) Next stop after Breckenridge is Pike's Peak.  You can reach the peak using the Manitou and Pike's Peak Railway (a cog railroad). But, the scooter did just fine on the 19 mile trip to the top.  Coming down, we camped at the Colorado Springs Elks.  The hookup sites were full, so we dry camped.  In the morning the camp host told us a site was opening up.  We went to check out the site and who was there? Lauren and Jeanette!  We chatted for a while and they headed off to Pueblo, Colorado.

We had visited Pueblo once before and parts of the town are very nice. So, we thought, hey, we'll just meet them there.  So, we did.  We spent a Saturday night with them and the next morning visited at church and breakfast.  As they we leaving town, they asked if we had ever been to the Royal Gorge. Nope, didn't know what it was.

One of the greatest benefits of living full time in your motorhome, is that you are always home.  And, on moments notice you can go 70 miles away to Royal Gorge, so we did.

From Colorado we traveled to Texas, Arkansas, Missouri, Oklahoma, Texas and New Mexico. By October 2008, we were in Yuma, Arizona. Here is (was, now sold), Lauren and Jeanette's winter home.  They met us on their scooter and chaperoned us to their "house".  They have two hookup sites in Yuma, so friends can come and visit.

Two days in Yuma and we were off. We put this sweet couple on our weekly travelogue list. Over the years, they have responded now and again, which (hint, hint) is always fun. As many of you know, we were in Kentucky in summer 2011 having our engine repaired. And, lo and behold, who else was in Kentucky? You got it, L&J. Here we are in Center City, KY at West Kentucky RV Park.  We spent only one night as we had a date in Missouri. 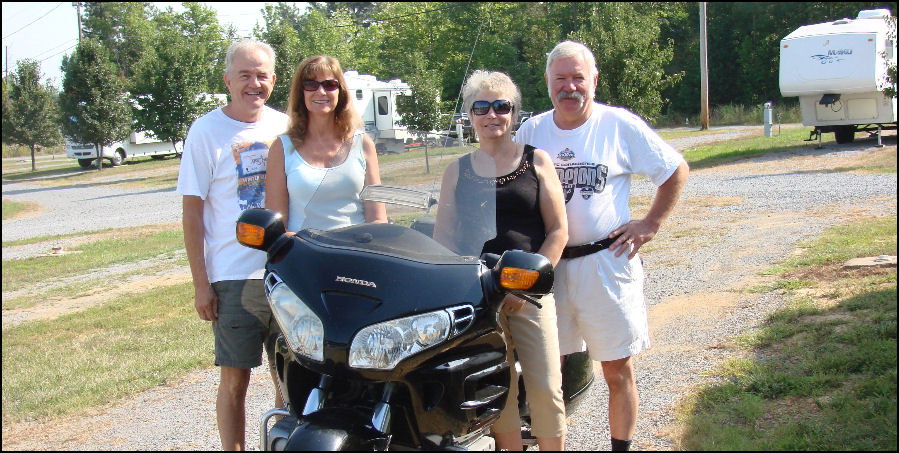 On the return swing from Missouri, we settled in Goodlettsville, Tennessee just north of Nashville.  Like a good penny, L&J were there again.

We took a cycle with them to Nashville.  They were headed to the Grand Ole Opry House and we headed downtown.  Now, we know everybody runs into people they know and did not know they would be in the same town.  But, the RV life just makes this happen more often, and it is such a blessing.

And that leads us back to Lauren and Jeanette in Avila Beach. L&J, you are such a blessing to us. In this picture, you can see them breathing a sigh of relief thinking, "Wow, Pete and Ellen wrote a whole travelogue about us and didn't roast us once. Glory B 2 God." 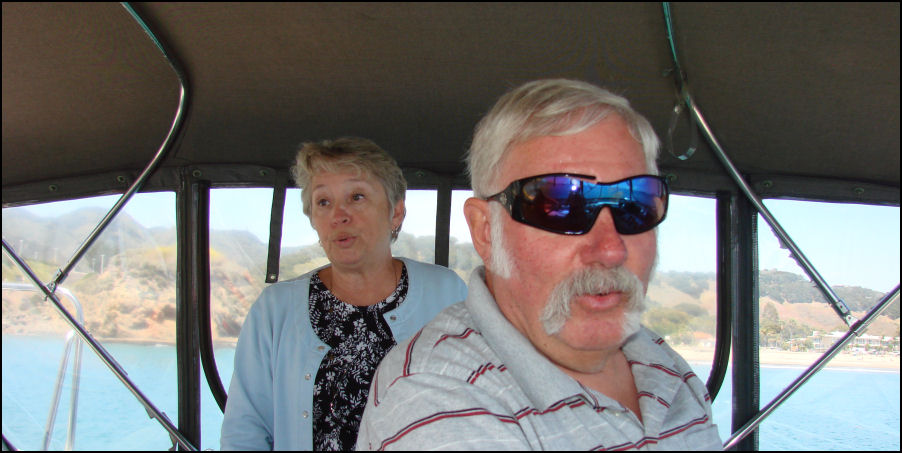 To all our friends and family, be blessed.