Our 2020 tour just started in August as we have sat at our old home since last July. 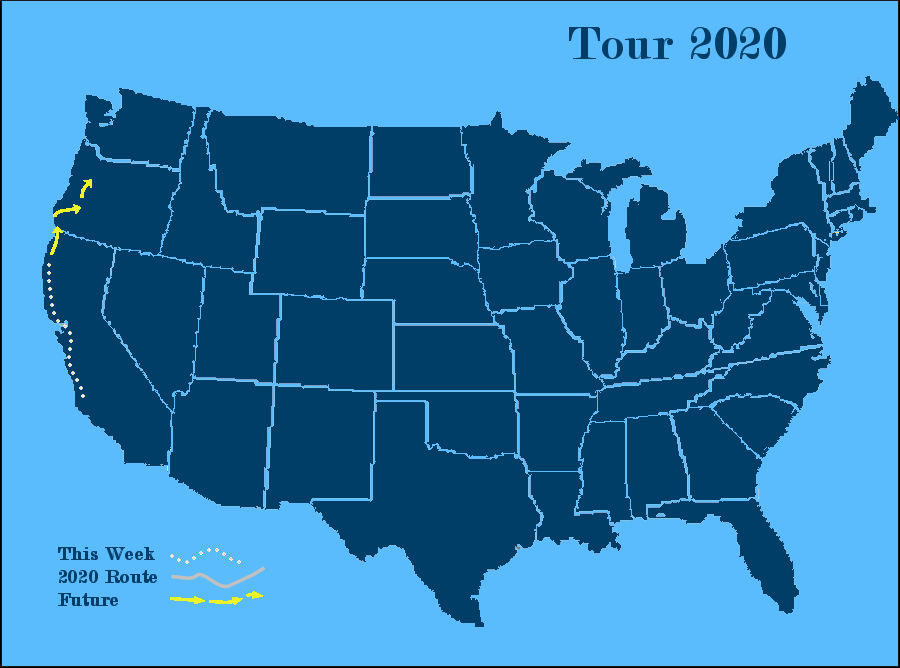 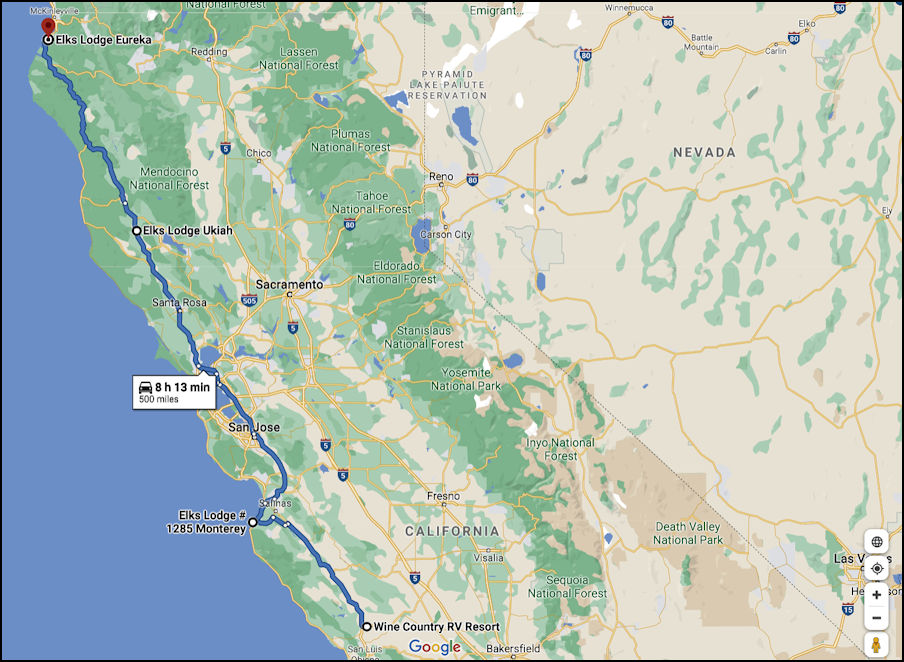 A lot has changed: no rental house to come back to repair and clean; no more monthly utility bills; no neighbors barking dogs and now freedom to travel full time once again.

We'll miss being close to family and friends, but like a bad penny, we always turn up when you least expect us! Another thing that has changed is not how long we will stay at destinations, but how long we are to get there. The MotherShip, ScooterShip and the JeepShip now max out at just inches under 65 feet. Out of the millions of big rig motorhome travelers only a handful do not tow a vehicle. Now for the first time in 15 years, we join the majority. Note that we are now illegally over length in Illinois, Maryland, New Jersey and D.C. Maybe, we'll stay in North Dakota where the limit is 75 feet or 110 feet on designated roads. 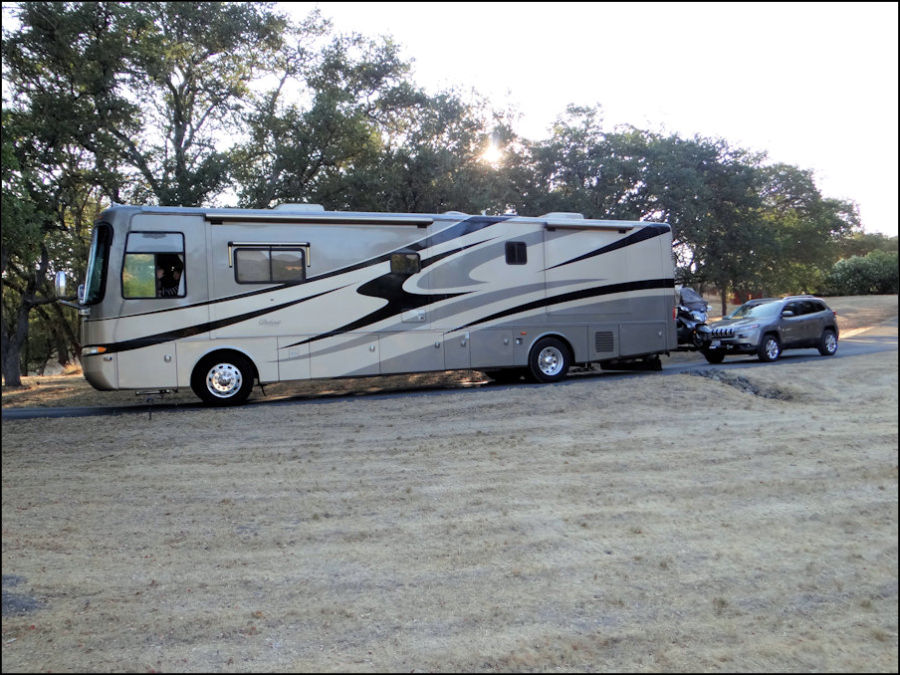 Our first stop was Wine Country RV Resort in Paso Robles. Yes, just 20 miles from our house. But, Dar, we want you to know we did the drive non-stop! 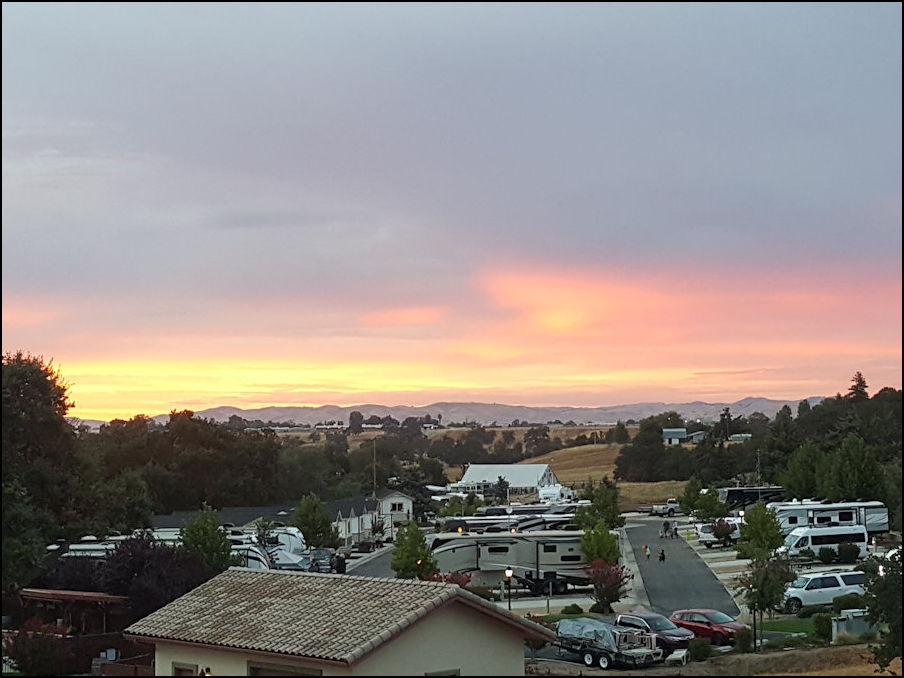 As Emily and Chad came for Uncle Ron's 90th party, this was a chance to be with the granddaughters. Of course, we'll see them in Northern California. 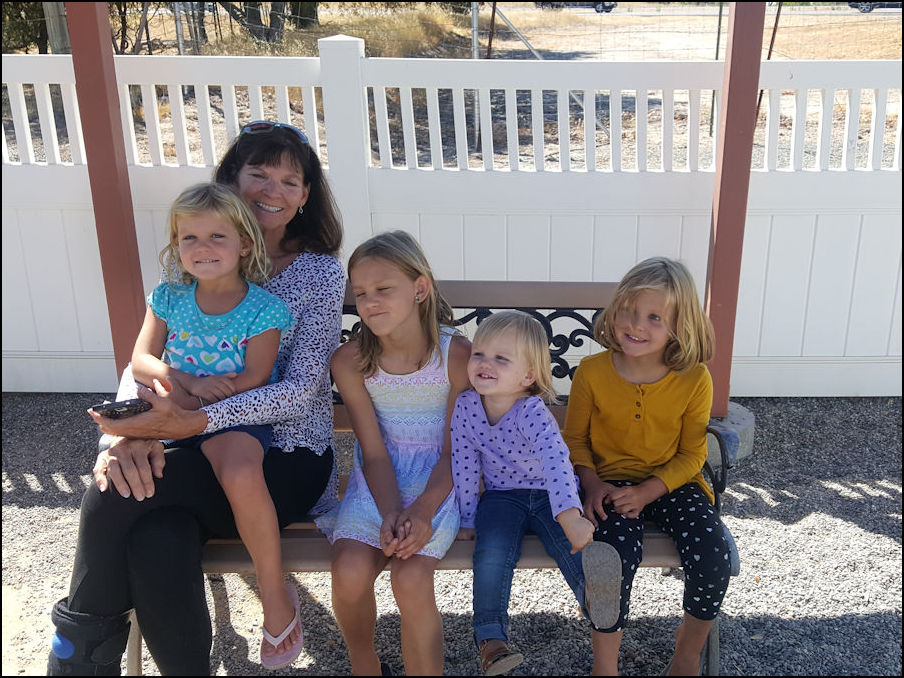 We pose for a shot with two of our best friends from home. We'll miss you too. 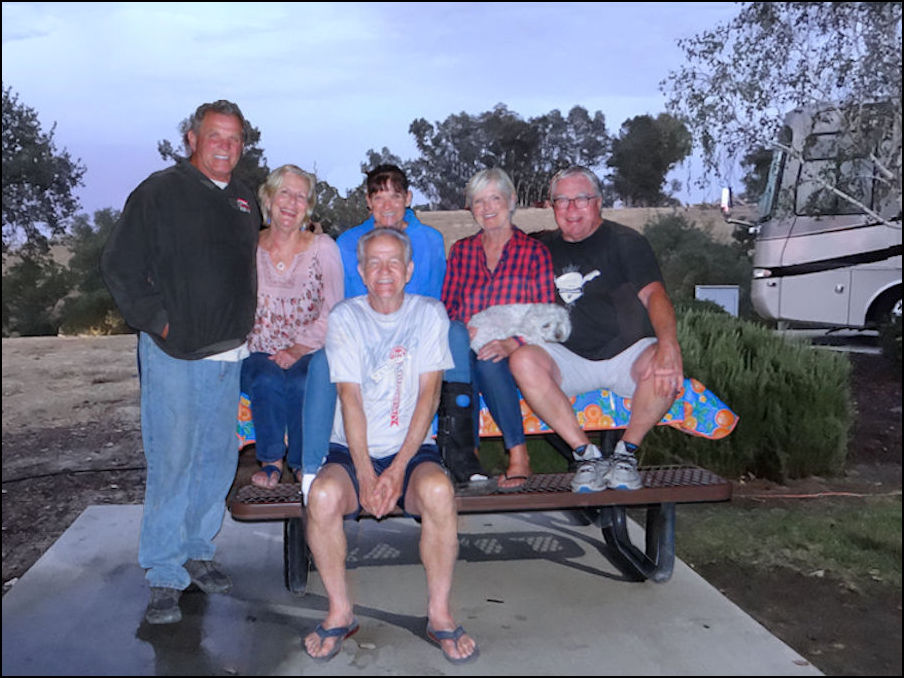 Where are we going? Back in January 2008 we left Atascadero and headed to El Centro, California. Who goes to El Centro? We did as it was the warmest spot in Southern California. Most of you know we always search for warm. But this time with temperatures over 100 and heading higher, we are out to Beat the Heat.

Our destination is Eureka, California where the highs are in the 60's. First stop was the Monterey Elks. Being on the coast temps were in the high 80's. Better, but with our front A/C unit out, it was tough to stay cool. Note that we have needed a new A/C for a year but it was okay under the trees at our house. Now, we are ready to get the new unit and the entire US stock of A/C is depleted. We need to stay in cool areas until A/C units are back in production. 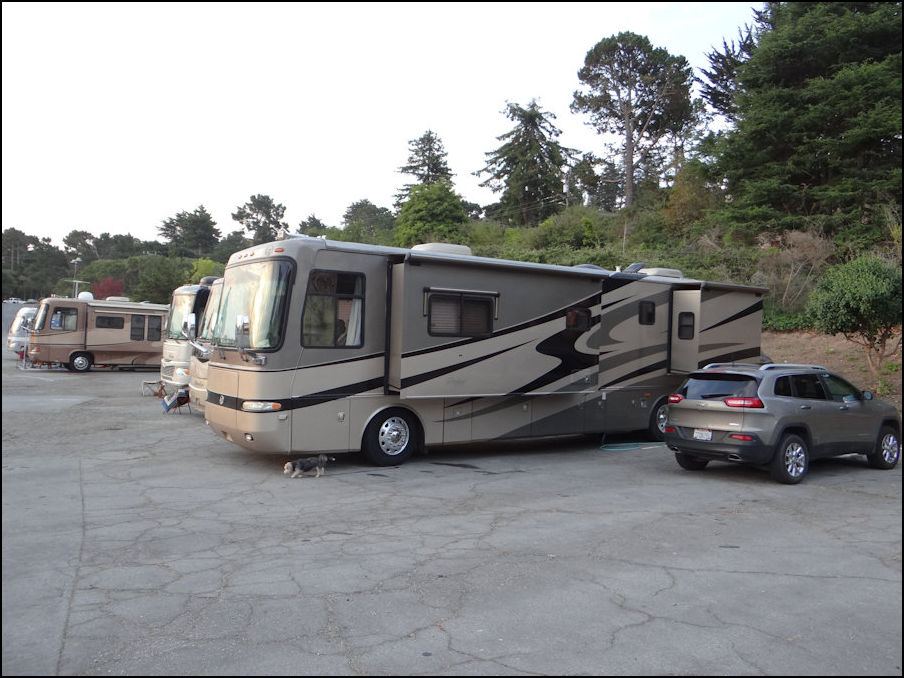 Monterey is nice. Ellen got these photos in the morning as Pete was dreaming about waking up. 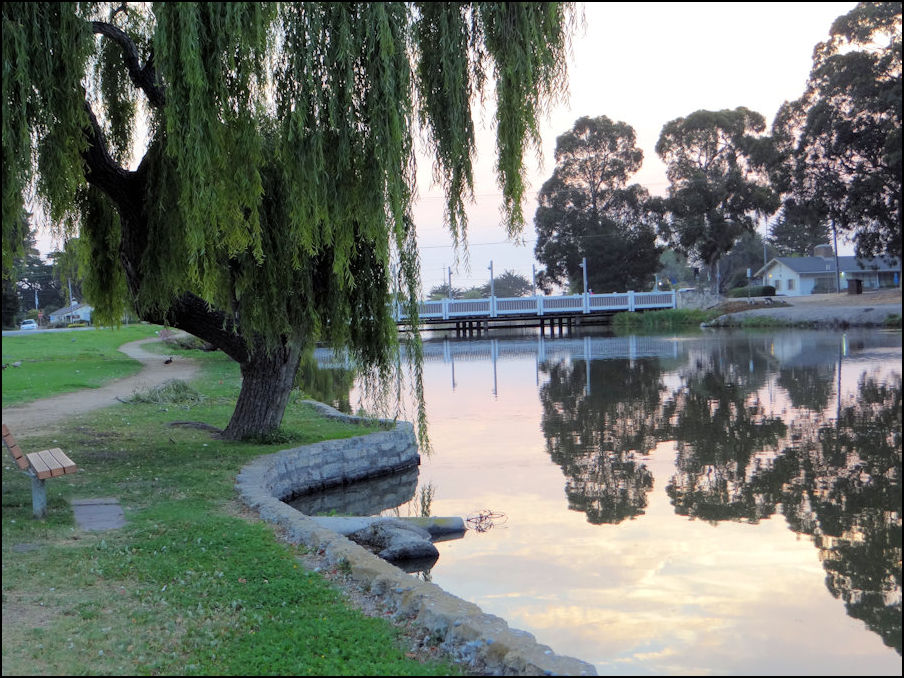 Although the motorcycle served us well for the past fourteen years, we are pleased to have a car again. It is great to have a car for comfortable morning trips. Yay for a 65 foot MattsonShip. 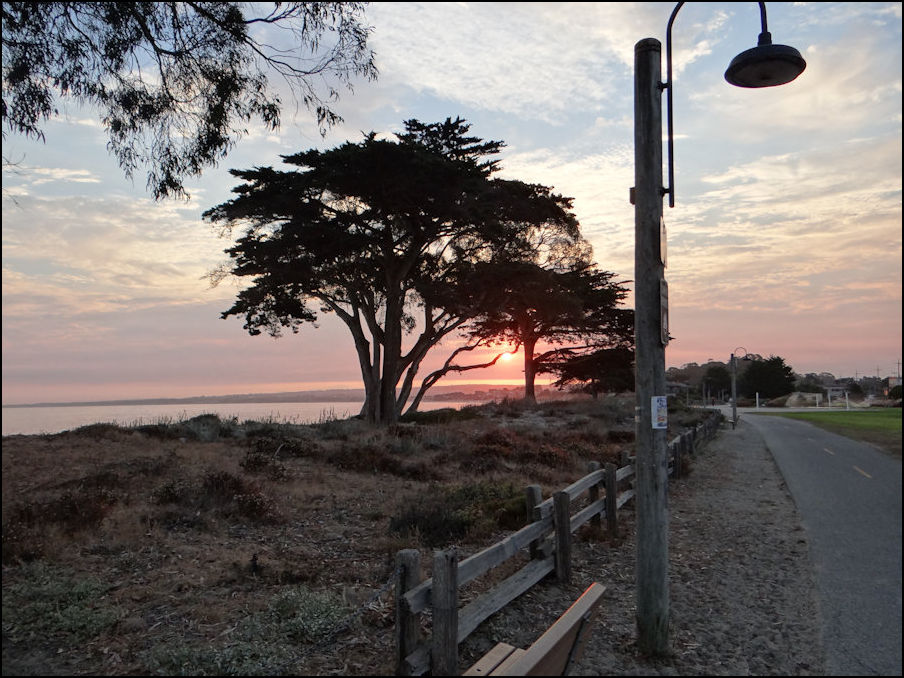 Pete's waking up, time for one more photo. 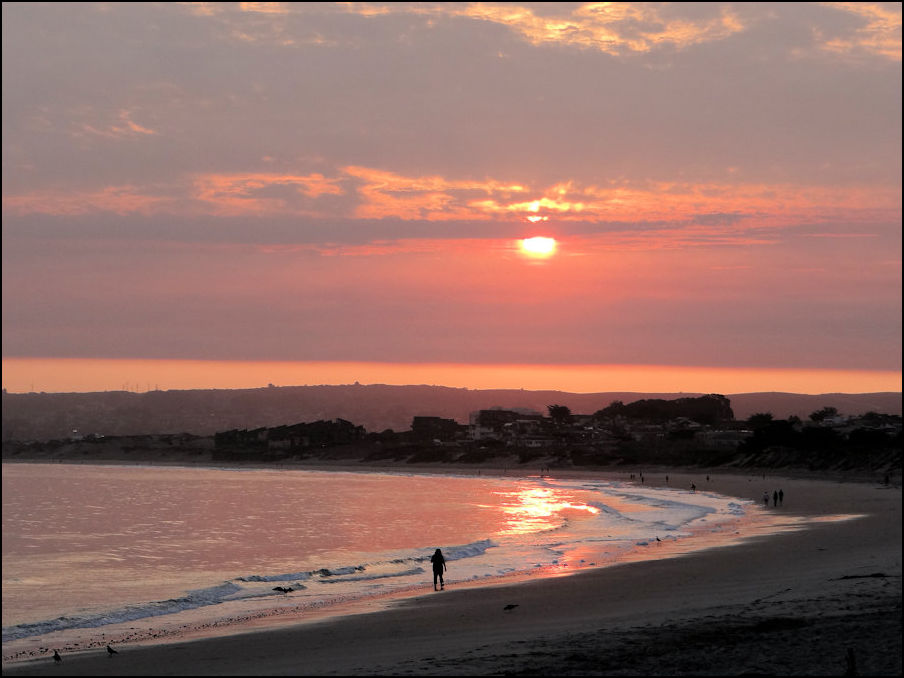 A trip to Cannery Row is a must. The first cannery opened in 1908, the Pacific Fish Company. The biggest canning boom was in the 1940's and by the mid 1950's most were closed down. The last cannery closed in 1973. Today Cannery Row is for tourists only. Amazingly there is big rig motorhome parking right on Cannery Row. In fact, while overnight parking is usually not allowed they are allowing it this year as "some people are afraid to stay in hotels". Really! Okay, good for us. Who is that masked woman? 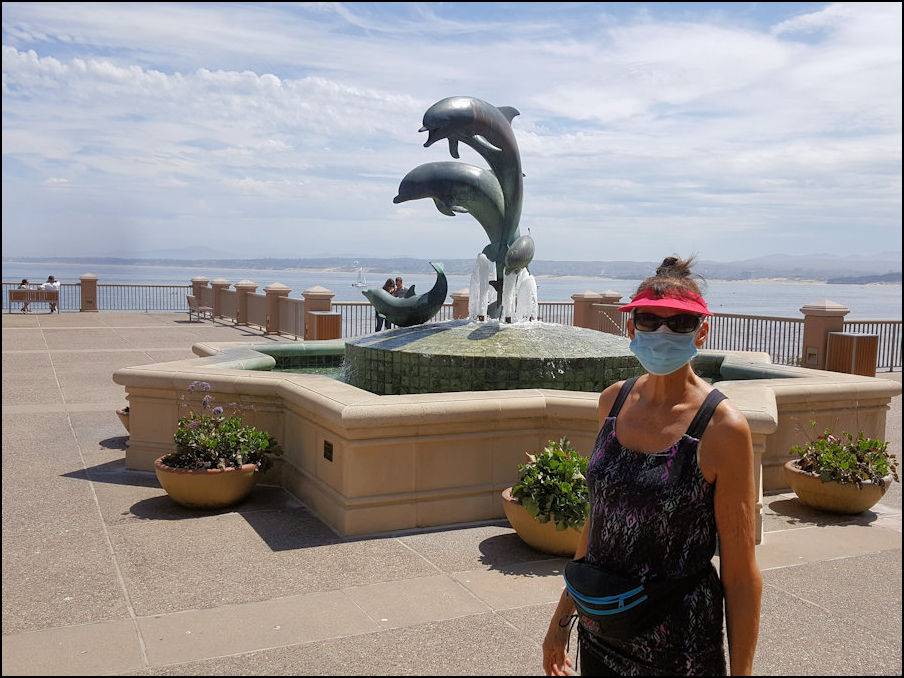 While most sports are shut down, the Final Four is alive on Cannery Row. John Steinbeck wrote his book "Cannery Row" in 1945. The street back then was called Ocean View Avenue, but changed in 1958 due to the influence of Steinbeck's book.

Leaving Monterey we headed up Hwy 101 towards Eureka. We don't travel 384 miles in one day. So we decided to tough it out at the Ukiah Elks at 104 degrees. It's only one night and we'll enjoy the warm evening sitting out in chairs. Surprise, surprise, it started to rain. 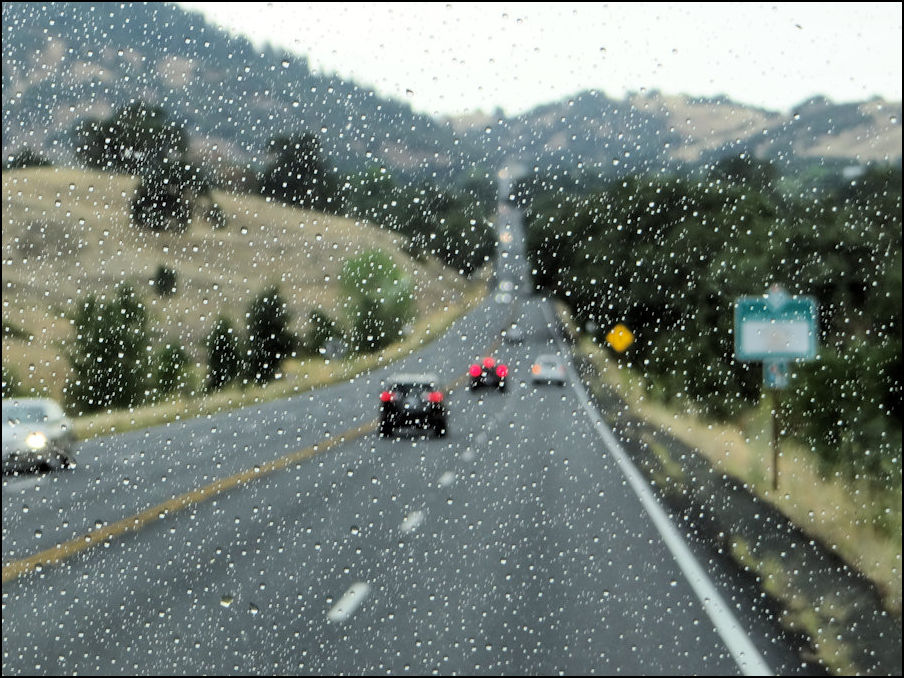 Arriving in Ukiah it never rose above 82 degrees. So much for sitting out in the rain. Staying only one night we dry camped so we would not have to disconnect the jeep.

And the storm gave us nice photos. 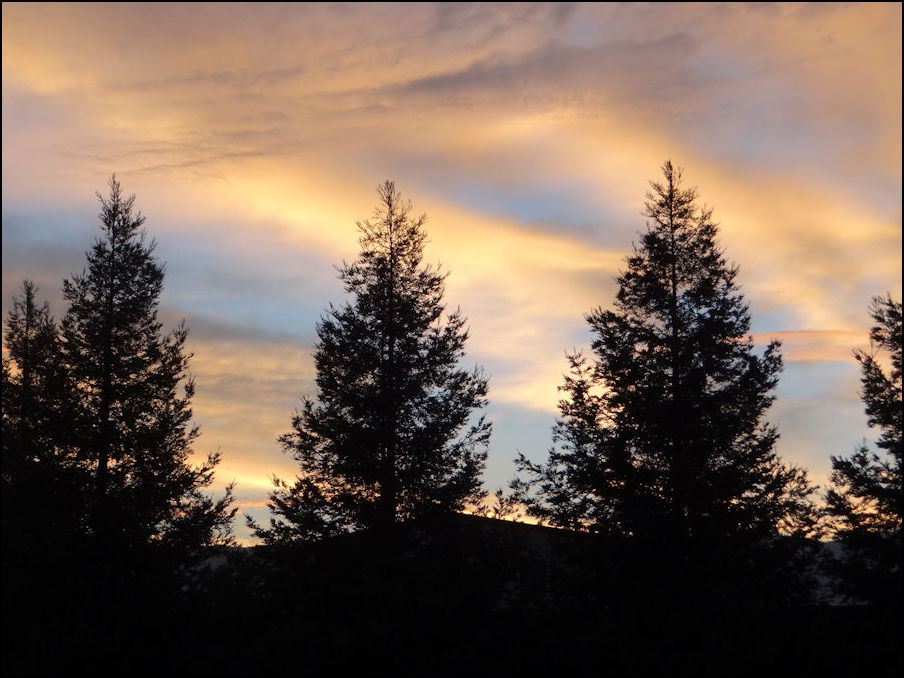 The next day we continued up the 101. At times it is four lanes, other times two and here on the Avenue of the Giants, Mandy says "this road is delicious". 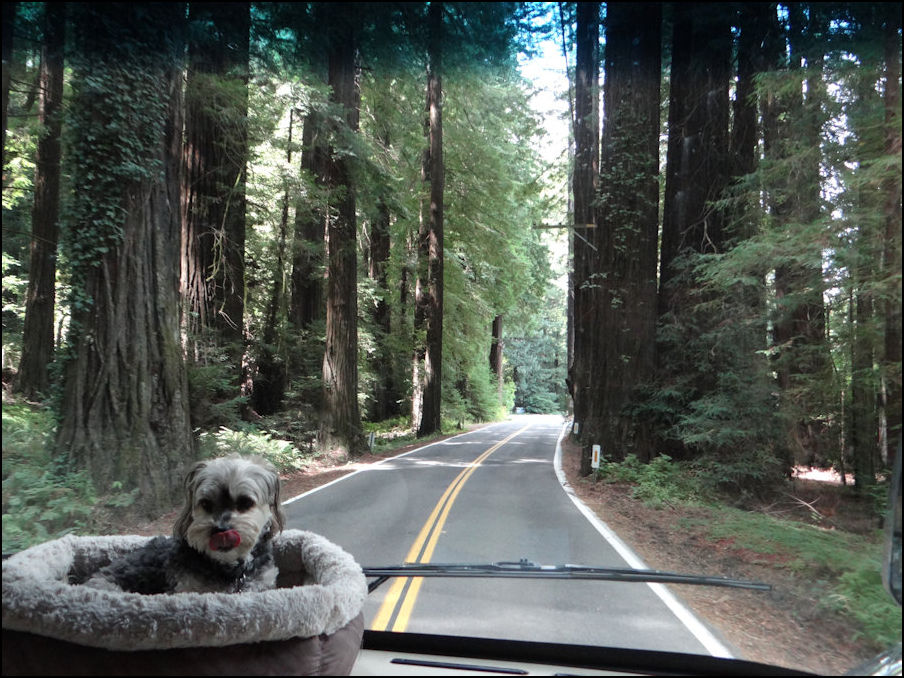 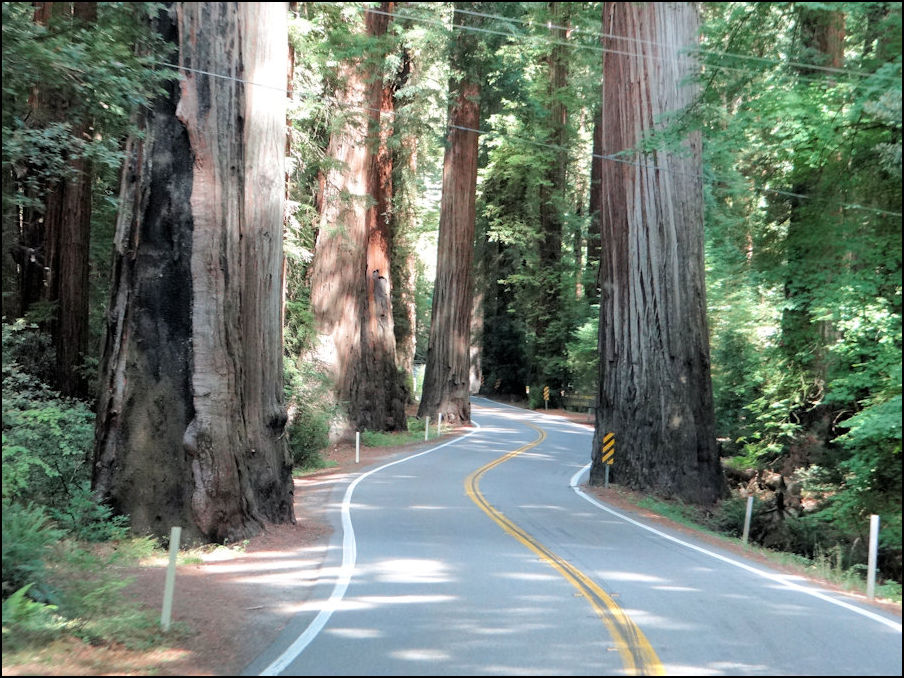 The Eureka Elks has 24 spots and we got the last one on the concrete pads. The others sites filled up quickly until all were filled. Our timing was perfect.

We always enjoy meeting up with friends along the way. It is even more fun when family shows up. Frank and Janice left Paso Robles to get out of the smoke from one of the 500+ California fires. They got to us in two days, just short of the 10 days it took us to get here. 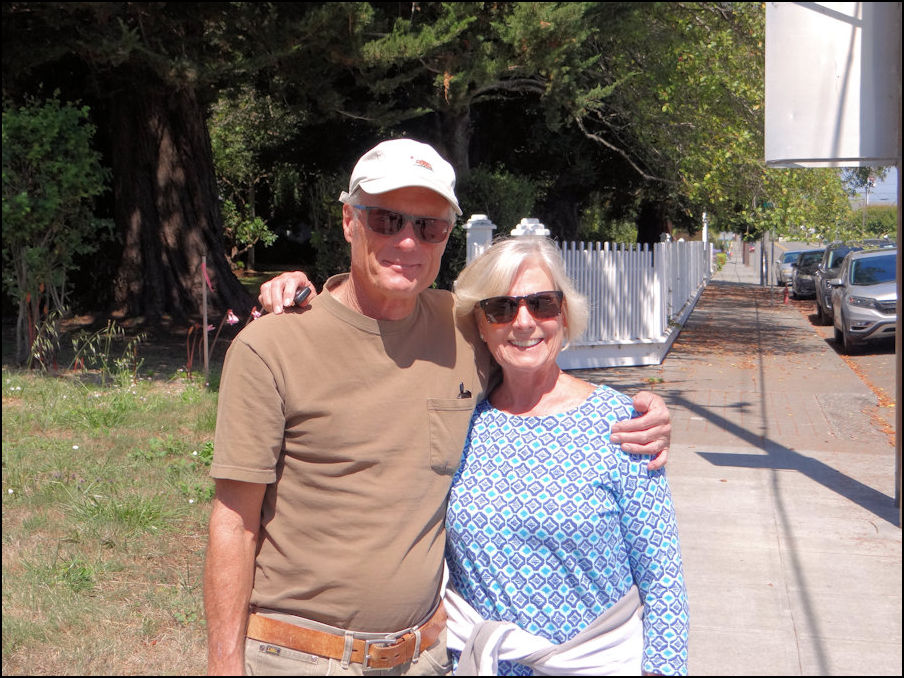 The four of us visited Fort Humboldt in Eureka. It is located on the bluff overlooking Humboldt Bay. The Fort was established in 1853 and abandoned by 1867. Today it is a Historic State Park and museum. It is littered with railroad tracks and lumber equipment illustrating the history of lumber companies in the area. 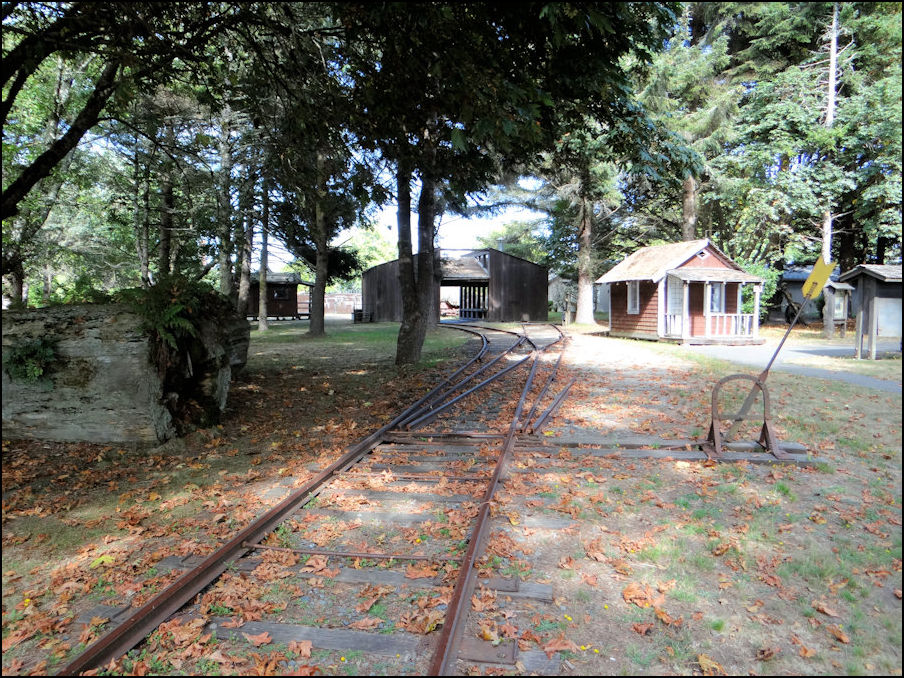 The US flag flies proudly over the park. 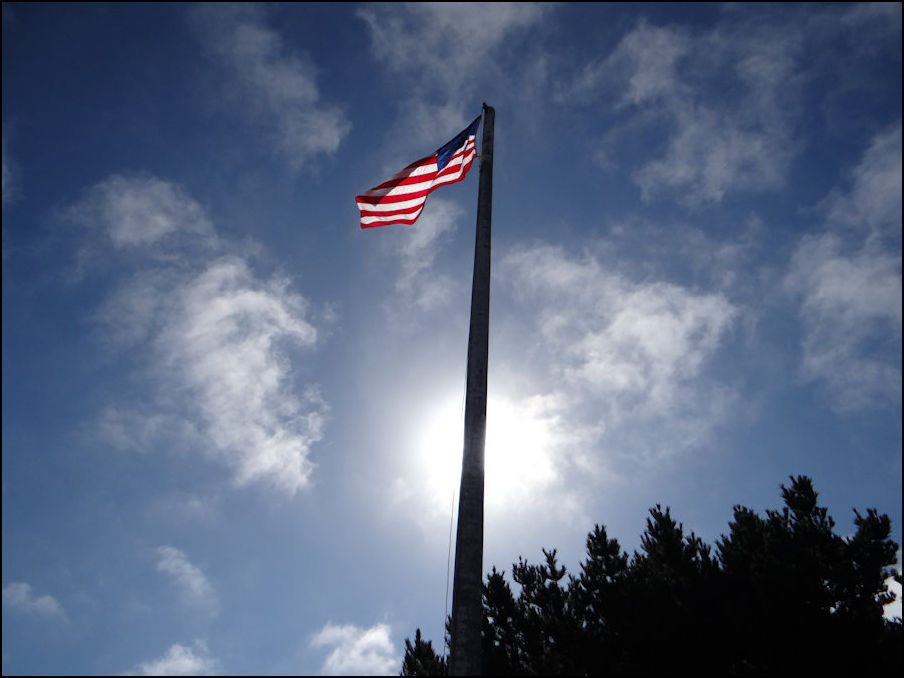 The surgeon's office has been restored. 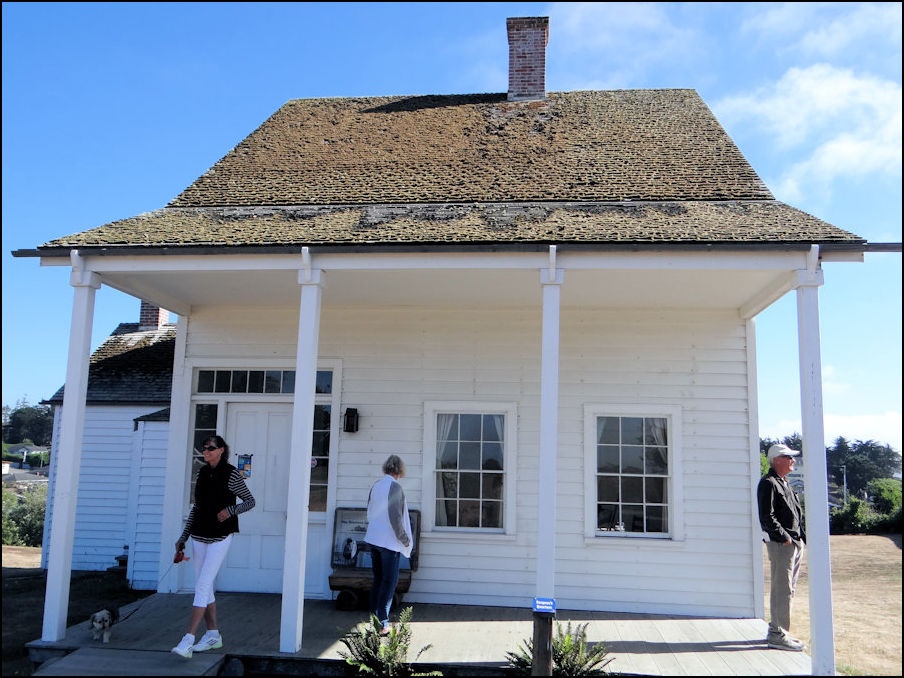 A replica of the hospital was rebuilt, located near its original site. 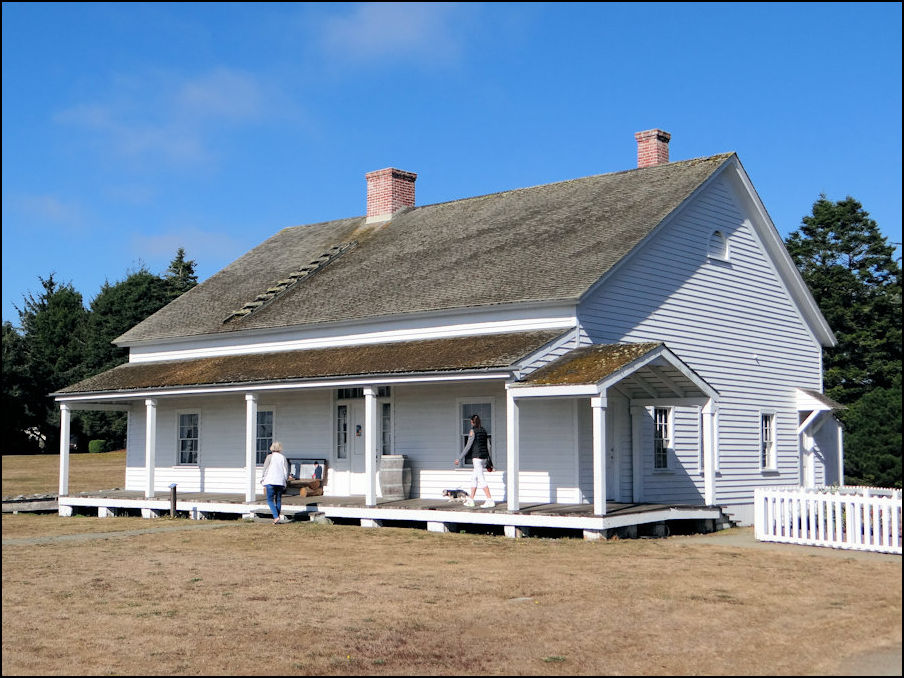 The Carson Mansion in Old Town Eureka is advertised as the "most photographed Victorian house in America." Architects Samuel and Joseph Cather Newsom of San Francisco created the home for William Carson in 1884-1885. Today it belongs to the Ingomar Club, a private club. Tours are not available but you can see inside the Carson Mansion. 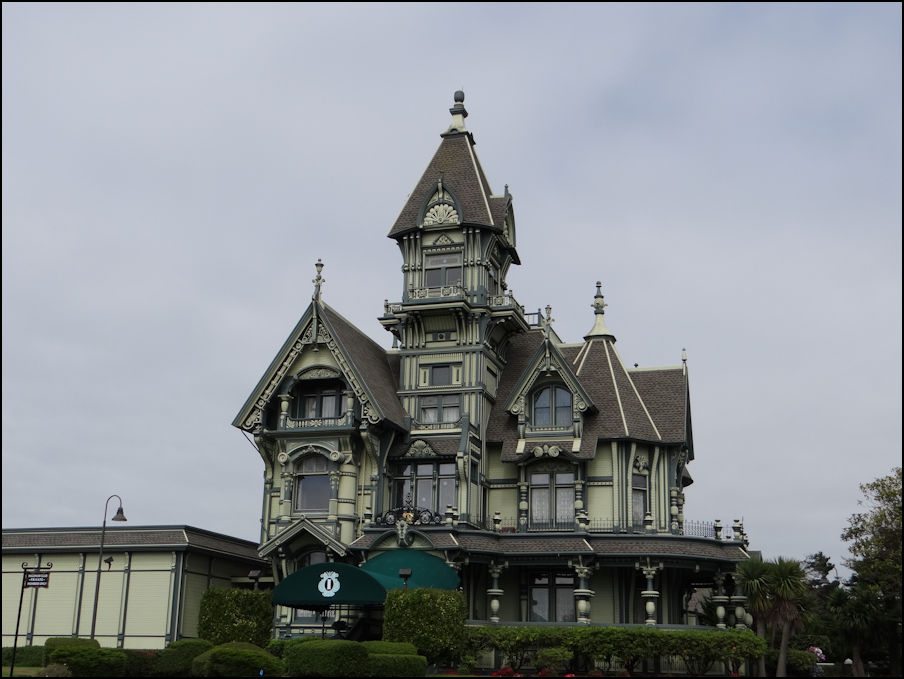 The Pink Lady (Vacation House) across the street was built in 1889 as a wedding present to William Carson's son. Per Wikipedia, "After being sold in 1920, it went through several owners before being inherited by sisters in Germany. It operated as a rooming house until it was seized as Nazi property in 1942. In 1964, it became the first historic building in Eureka to be restored.". 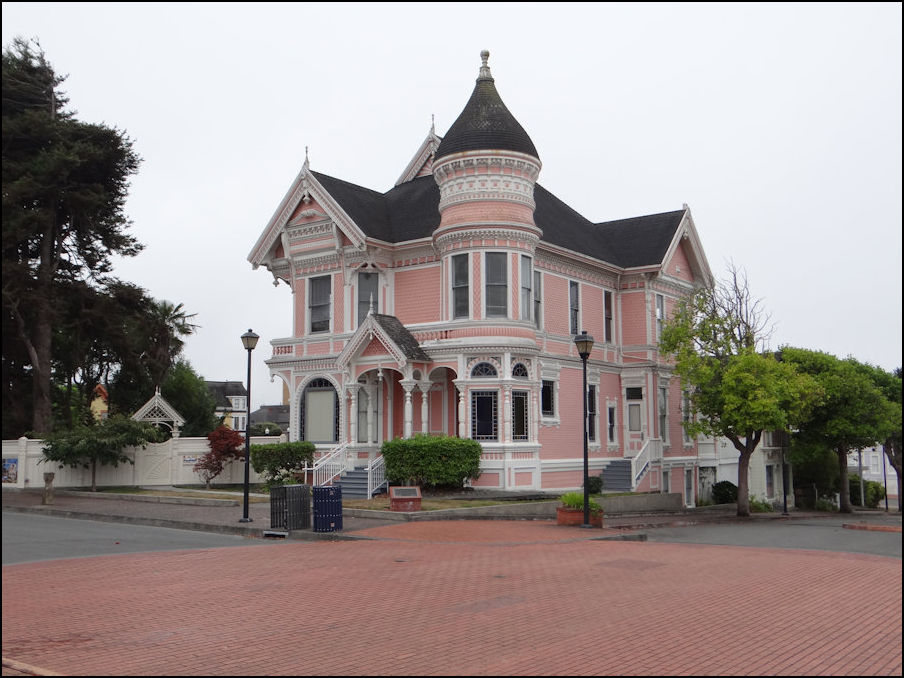 What historic item are Ellen, Frank and Janice looking at? 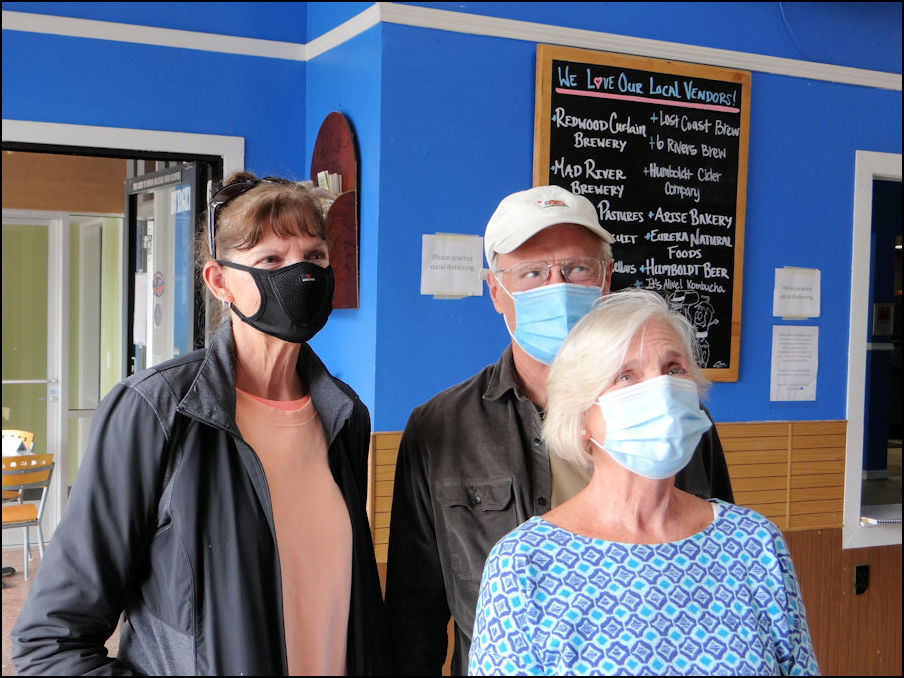 The Surfside Burger Shack menu. "It's real and it's spectacular!" 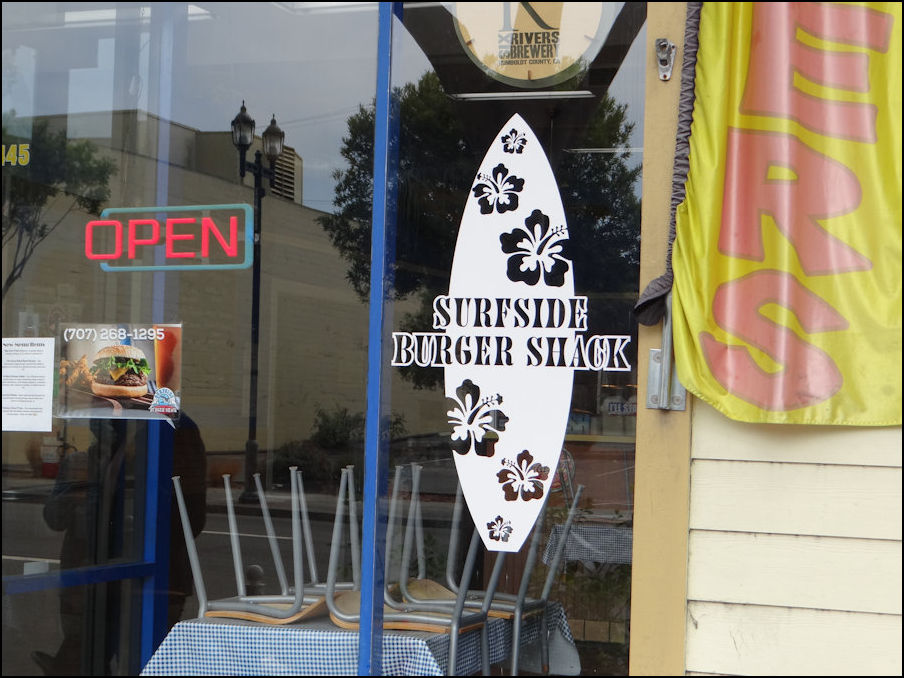 Great to be on the road again. Having been to 50 states, DC and 5 provinces, some say we have seen it all. But we know we have just scratched the surface. How much longer will we travel? Another 15 years? Perhaps, or as our son John said, "Will you just drive till you drop?"

"For man also does not know his time: Like fish taken in a cruel net, Like birds caught in a snare, So the sons of men are snared in an evil time, when it falls suddenly upon them." Ecclesiastes 9:12