(Photo from Google Images, all other photos are Mattson originals.)

The museum is on Valencia Rd in Southeast Tucson. 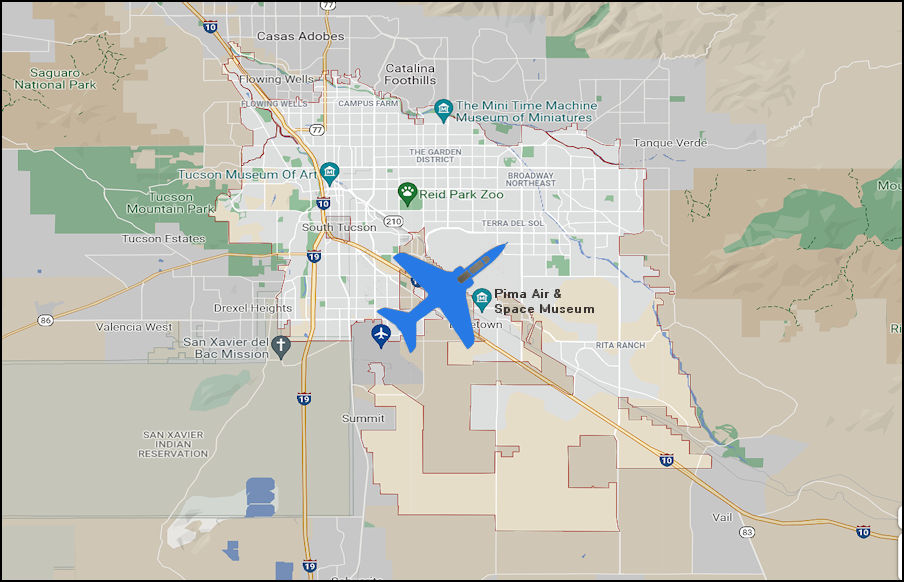 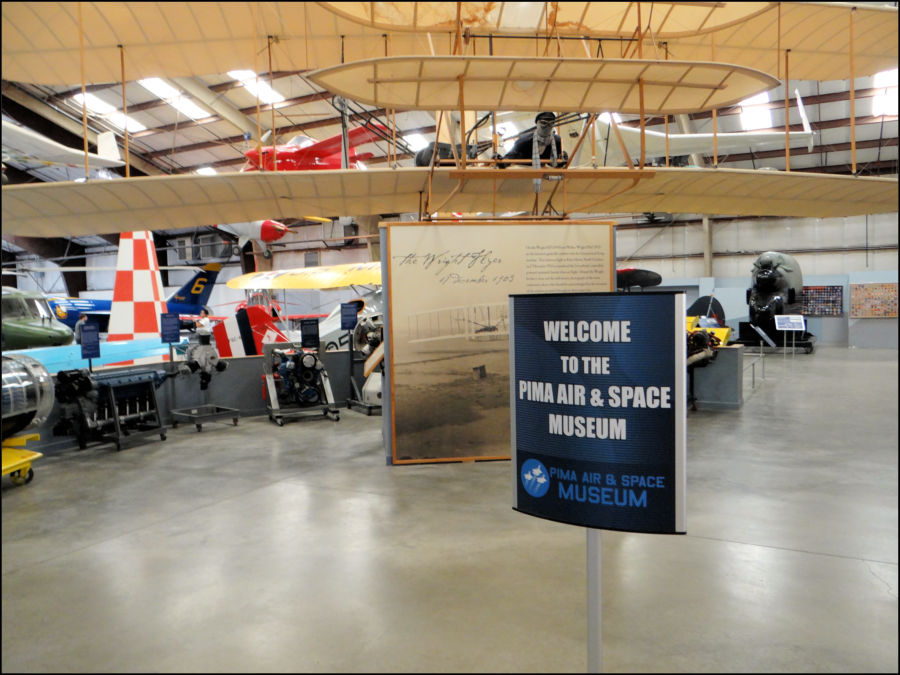 Pima Air Museum is one of the largest non-government funded aviation & space museums in the world. Located on 80 acres, it includes over 400 aircraft in 6 hangars and outdoors. 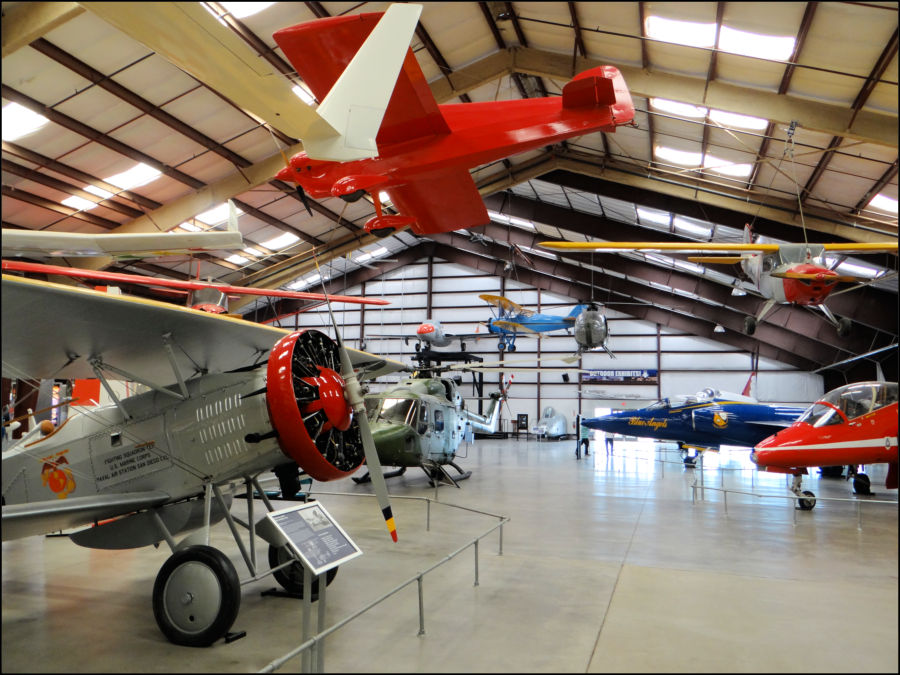 Most have heard of Boeing, Lockheed, Cessna and few others. In 2021 there are still over 100 aircraft manufacturers in the USA. The museum is filled with dozens of names you many not know. And contains foreign planes as well.

1) Taylorcraft BC-12D: Taylorcraft built observation planes for the Army Air Force during WWII. After the war they built private planes. This BC-12D competed with the Piper Cub but was faster. It could fly 105 mph and reach an altitude of 14,500 feet.
2) British Aerospace Hawk T1A: The Aerospace Hawk has been a trainer jet for the Royal Air Force for more than 40 years. It is the plane used by the Red Arrows, the British Aerobatic Team.

1) Bell UH-1C Huey (Iroquois) Helicopter: This first Huey was developed as a medical evacuation and utility helicopter. About 7,000 were in use during the Vietnam era.
2) Grumman F-14A Tomcat: The F-14A was the last of the Grumman "Cat" series. It was made famous by the movie "Top Gun".

1) The Lockheed S3-B Viking was designed in the late 1960's for use on aircraft carriers. It was equipped with the latest electronics to track the Soviet nuclear submarines.
2) Republic RF-84F Thunderflash: Built specifically for tactical reconnaissance for the U.S. Air Force. 700 were in service from 1952 to the early 1970s.

1) Lockheed SR-71A Blackbird: A reconnaissance jet that broke many world records. Top speed at 2,193 mph (Mach 3+) with a altitude ceiling over 85,000 feet.
2) Grumann J4F-2 Widgeon "Petulant Porpoise": The Widgeon was first produced in 1941 as a coastal search and rescue aircraft. Early in WWII a few were used for anti-submarine patrols. The Widgeon is credited with the first kill of a German submarine in August 1942.

Outside the main hangar we are greeted with over 200 planes and helicopters. If you wanted to see and read about every aircraft at the museum, it would take more than a single day.

Boeing B52-G Stratofortress Bomber: B52 bombers were built in the 1950s. Although massive, they could fly 400 mph, as high as 47,000 feet and as low as 500 feet to avoid radar. They were used during the Cold War with a range of 8,800 miles. To avoid being caught on land when needed, Air Force General Curtis LeMay has a policy of continuous flying. His policy was to fly 24/365 by using in-air refueling. This policy was followed from the 1950s to 1960s. 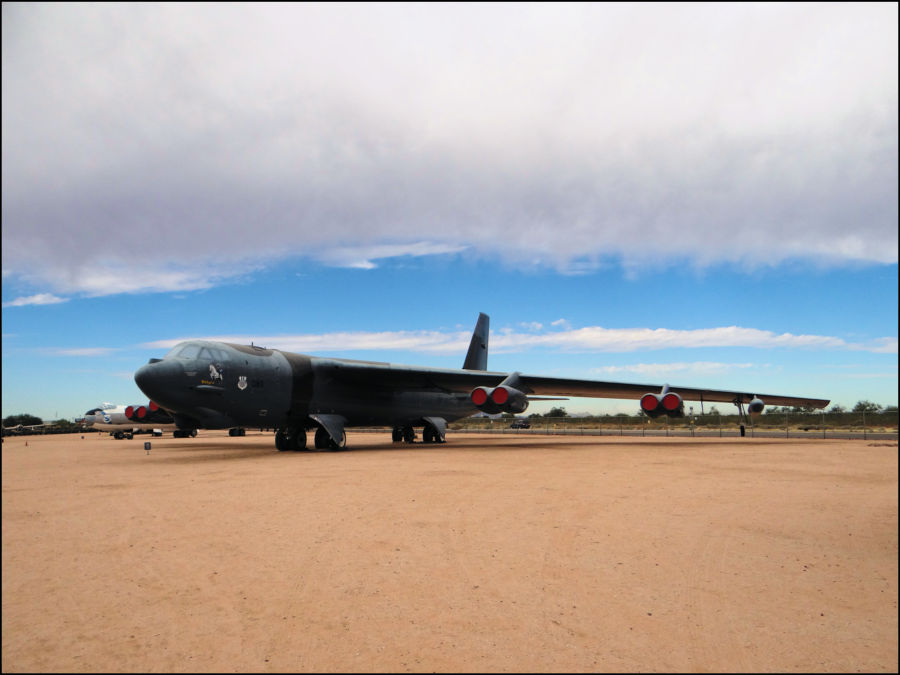 Convair B-36J Peacemaker Strategic Bomber: A bomber used from 1949 to 1959, capable of carrying all nuclear weapons. It was used until the B52 replaced it. 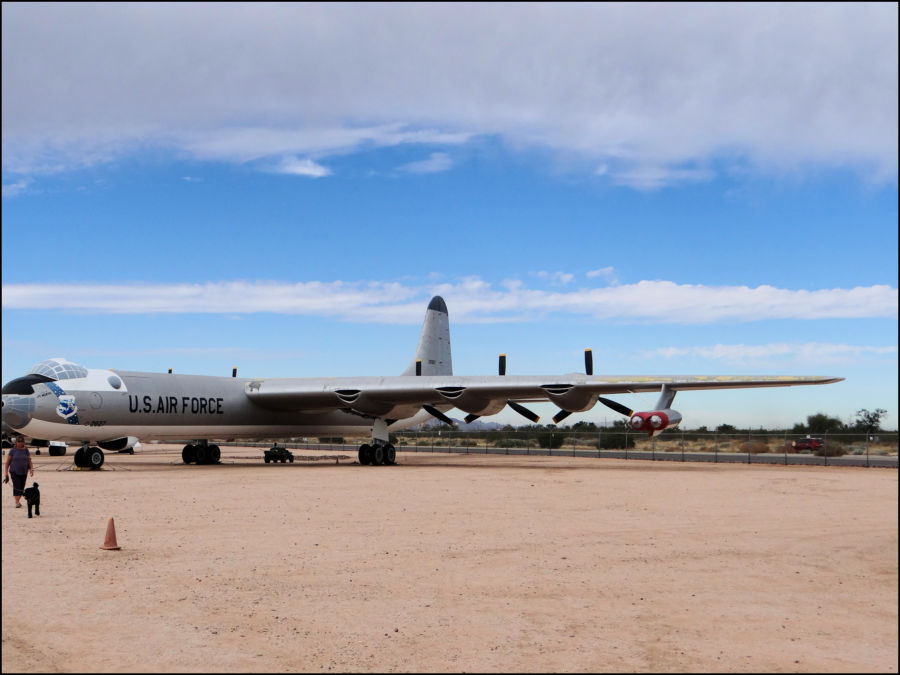 The Lockheed EC-121T Warning Star was an Airborne early warning and control radar surveillance aircraft. It was used by Navy and the Air Force in the 1950s. 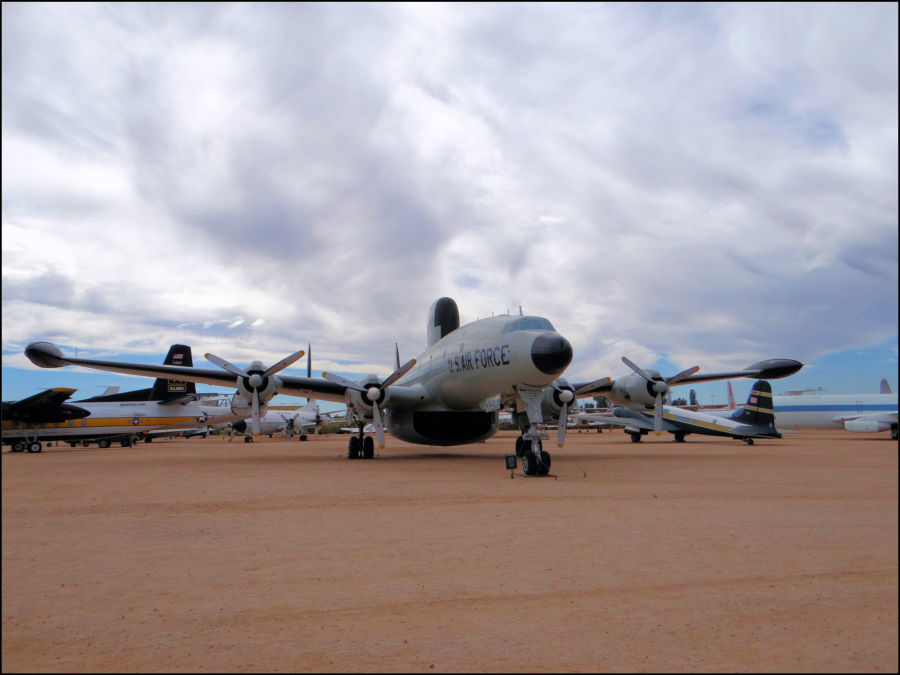 Boeing EC-135J Stratotanker Airborne Command Post: Designed and built in the 1960s, they were purposed as higher speed refueling tankers. Prior to the EC-135, refueling planes required the refueled aircraft to fly slower than their comfortable "flight envelopes". 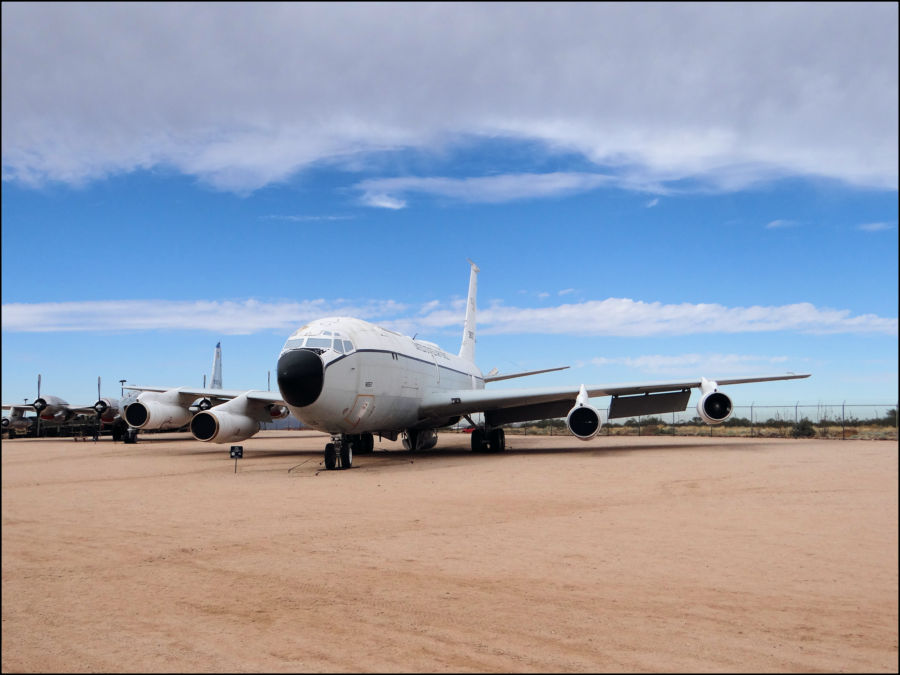 Douglas C-124 Globemaster Transport: Beginning service in 1950 during the Korean War. With fore and aft cargo doors, it was capable to transport tanks, guns, trucks and construction equipment without disassembly. 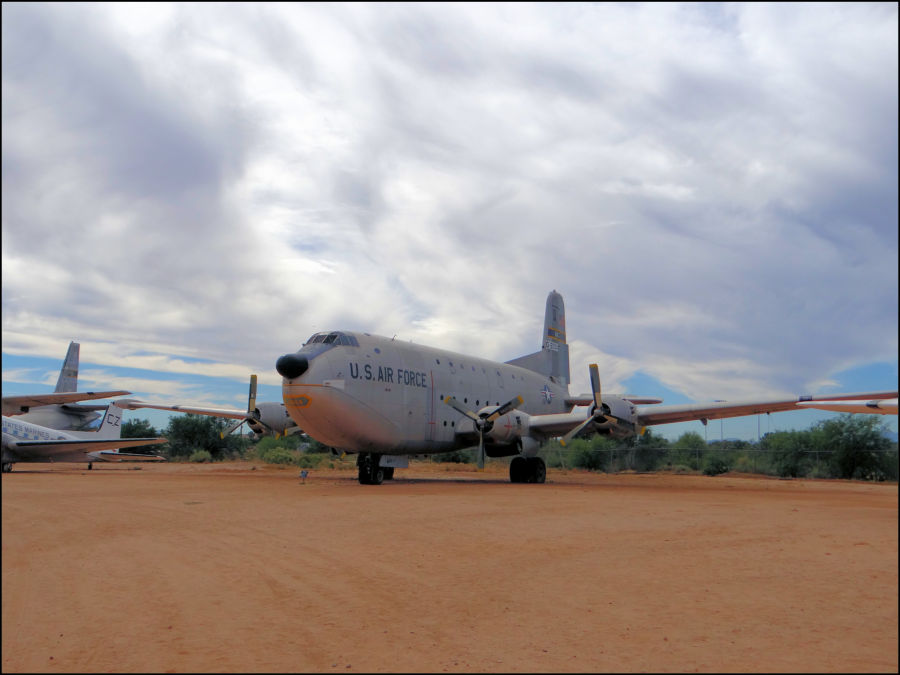 Aero Spacelines B-377SG Super Guppy Cargo Transport: Only five built, the Super Guppy's were used to carry oversized, but light weight cargo. The entire front including the cockpit opens. That vertical white line is actually the edge of the front door. 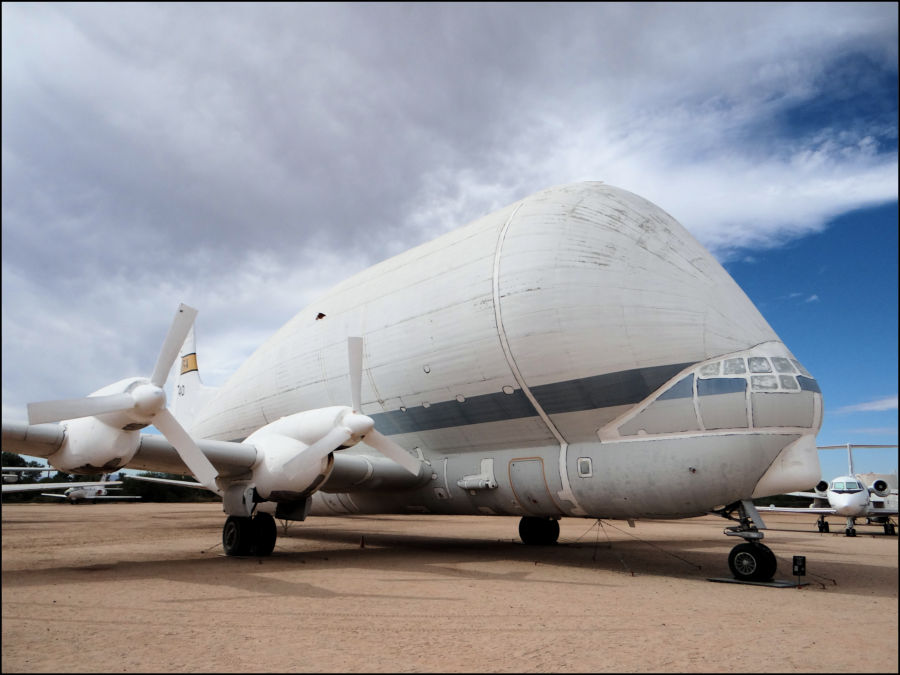 Douglas VC-118A Liftmaster VIP Transport: The VC-118A is a militarized version of the DC-6 passenger plane. It was used for cargo and passenger transport. This plane was used by Presidents Kennedy and Johnson. 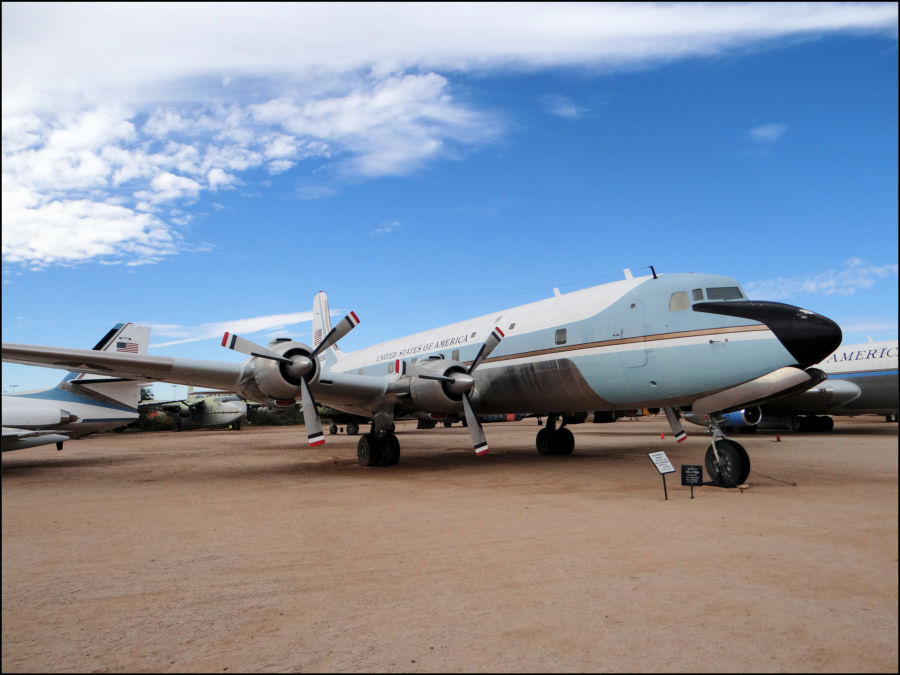 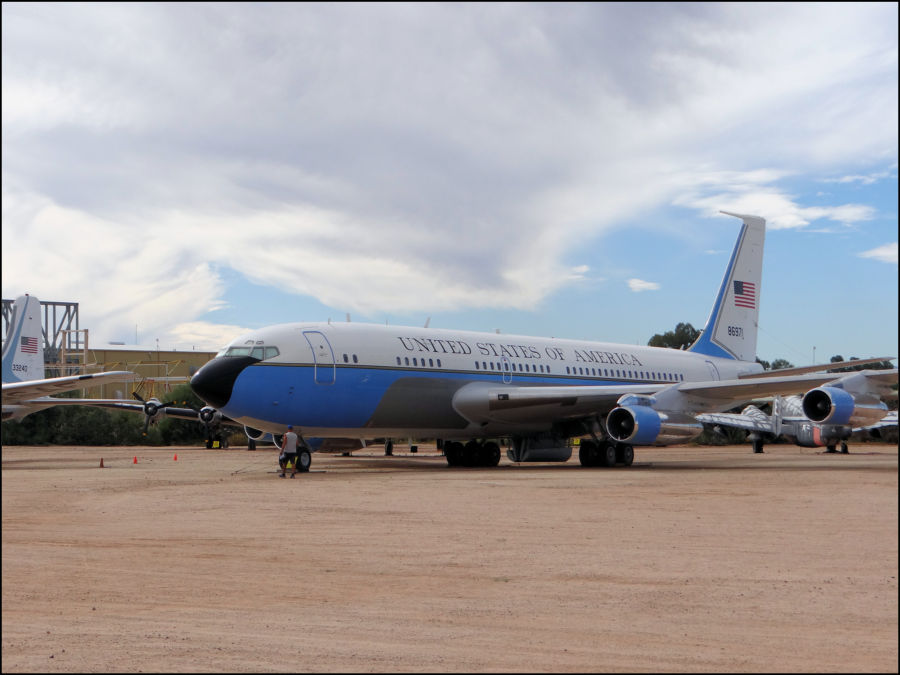 Lockheed L-049 Constellation Airliner: Trans World Airlines operated from 1930 to 2001. This plane known as the "Star of Switzerland" was restored by TWA. 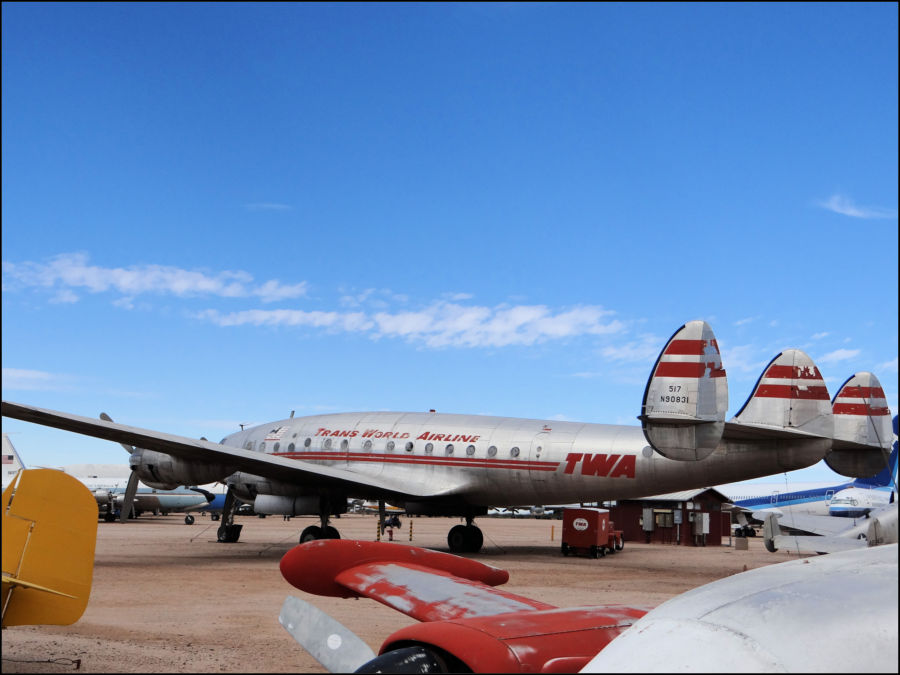 Boeing 787-8 Dreamliner Prototype: This is the second prototype created in 2009 and used for testing. The 787s are still in use today. 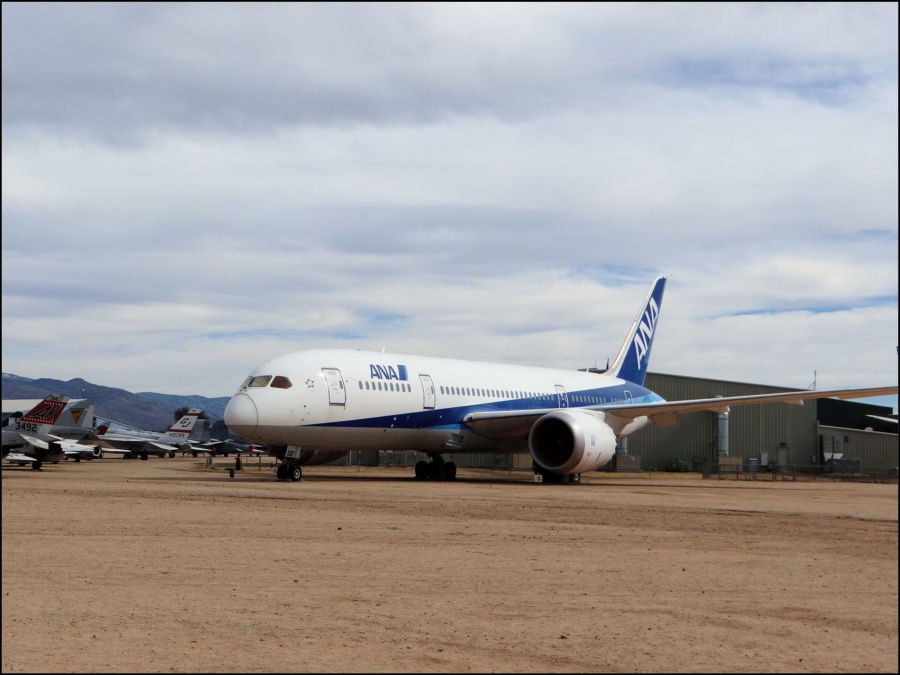 1) Ilyushin IL-2M Shturmovik: A Soviet aircraft used in the Second World War.
2) Douglas A-26C Invader: The A-26 Invader was capable of fast low-level attack, as well as precision bombing for close support of troops on the ground.

Consolidated B-24J "Liberator": Built and shipped to the Royal Air Force, it was used in India. India used this bomber until donated to Pima in 1969. 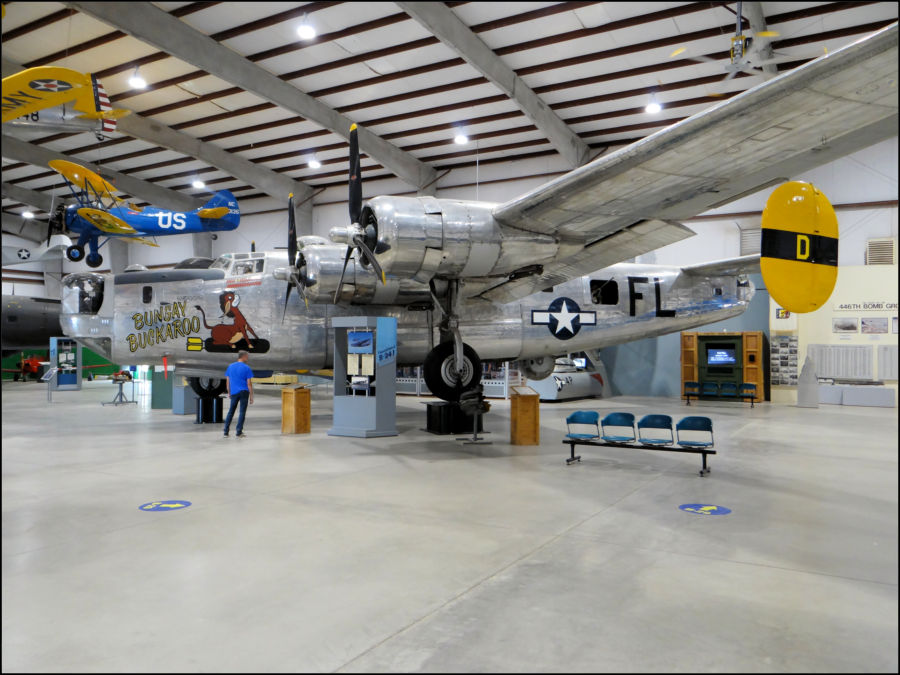 Douglas C-47 Skytrain: A military transport plane based on the DC-3. It was used extensively by the Allies in WWII. 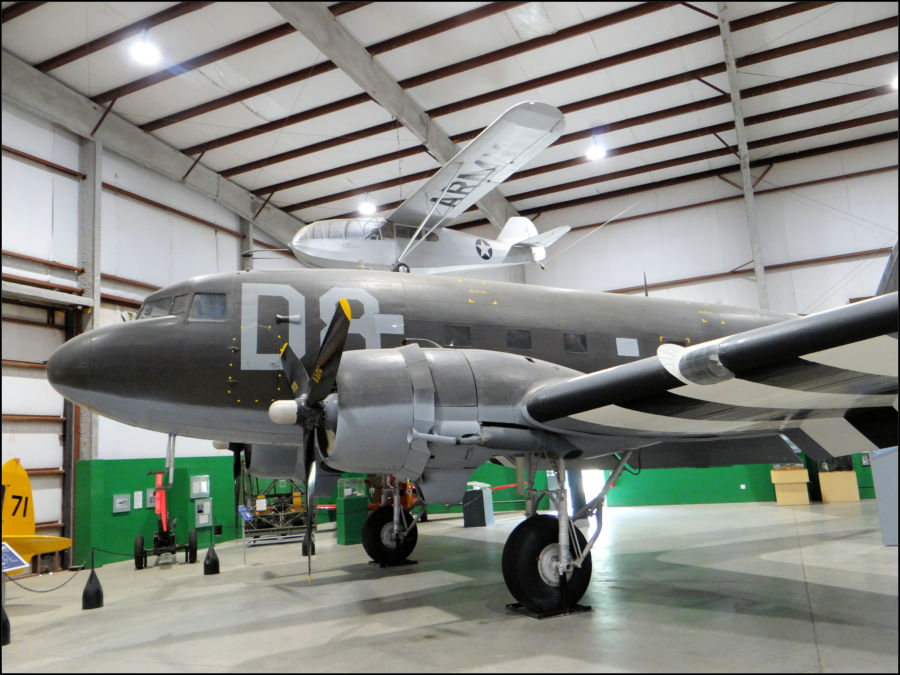 The North American B-25J Mitchell was used in every theatre in World War II and continued use for four decades. 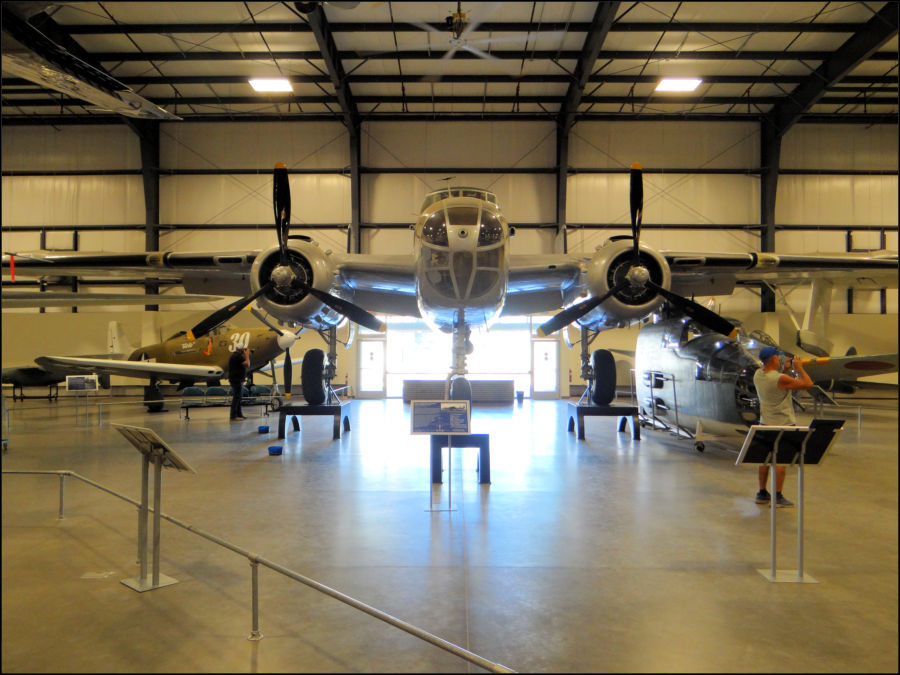 Consolidated 28-5AMC Canso A: With 3,000 units this is the most produced flying boat in the world. Started in 1935, it was used throughout WWII. After military service, many are used for firefighting or as luxury flying yachts. 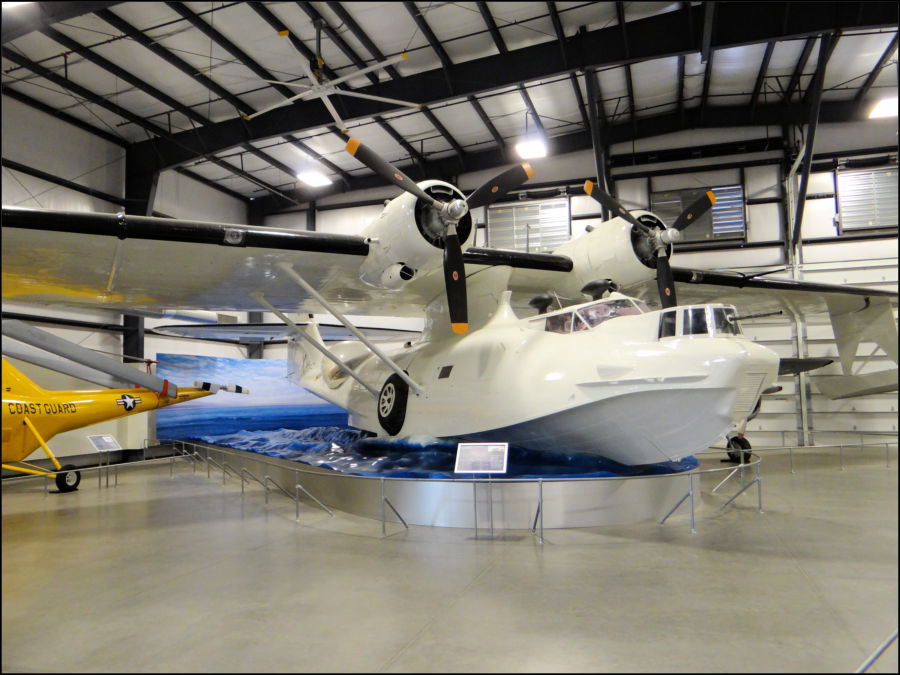 Douglas A-24B Banshee: The Banshee was first used in 1941 in WWII. It was considered slow, underpowered and had insufficient defensive armament. And yet it is credited for stopping the Japanese in the Battle of Midway. 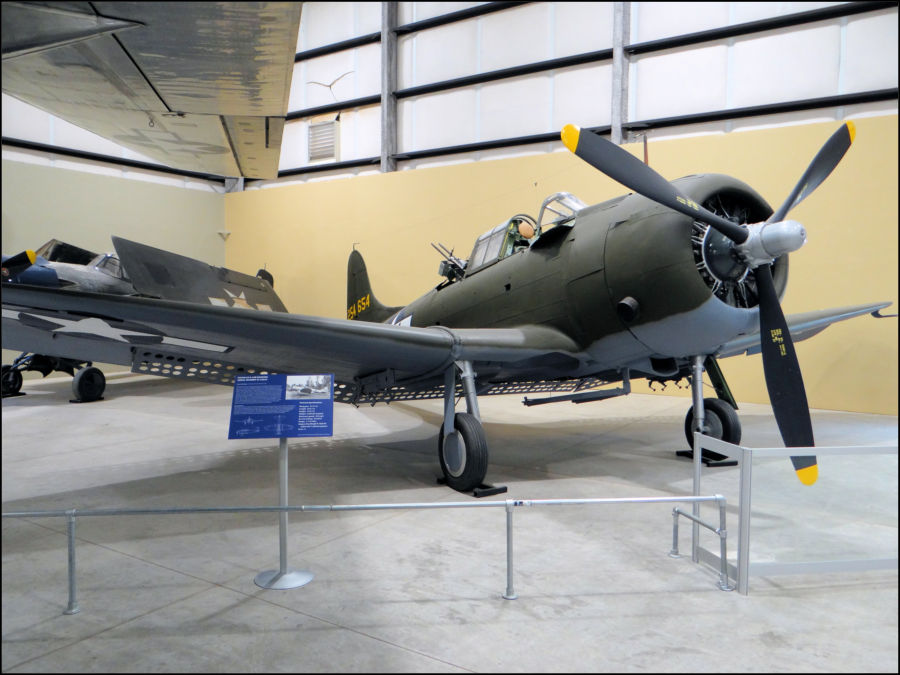 Boeing B-29 Superfortress Bomber: Used during WWII and the Korean War, this was designed for strategic high-altitude bombing, but also was useful in low-altitude nightime raids. 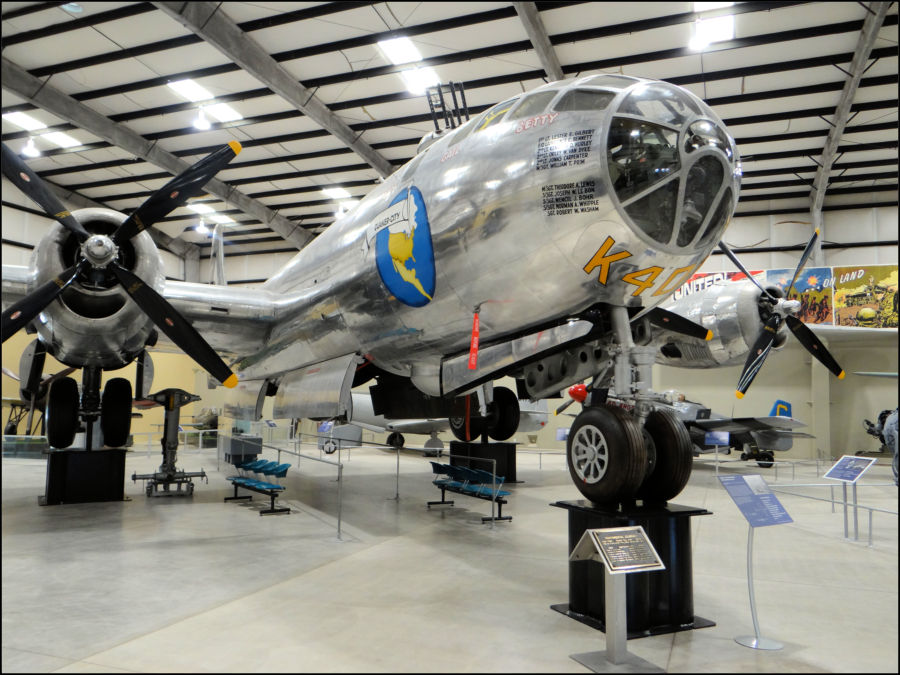 Curtiss C-46D Commando "Syracuse Shackrat": Designed in the 1930s as an airliner, it was adopted by the Army Air Force for military duty. Its large cargo space was used in the Pacific theatre especially in routes in India and China. 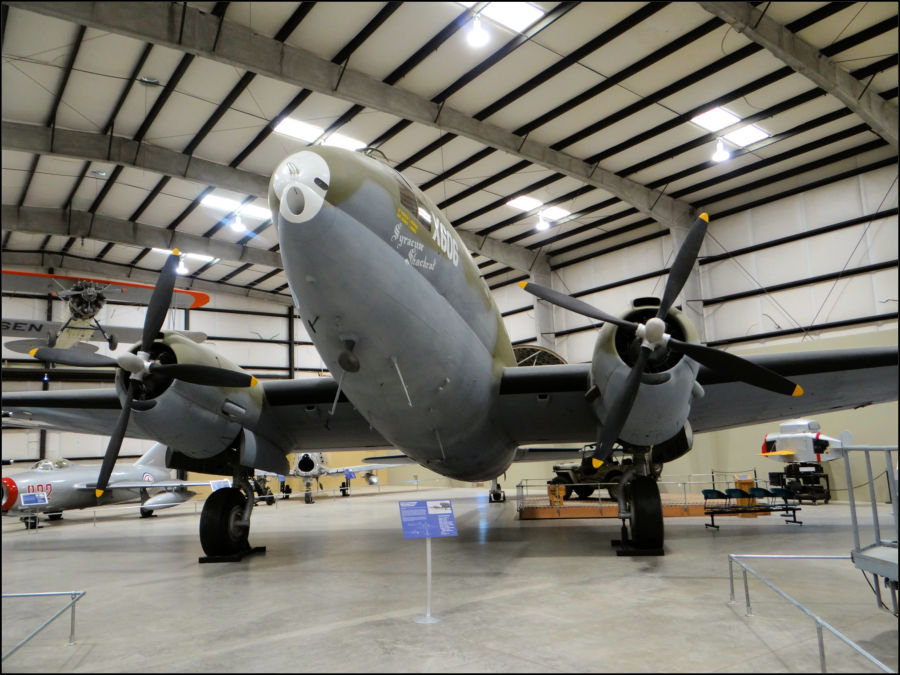 We just scratched the surface here, showing you less that 10% of what Pima Air Museum has to offer. When in Tucson, spend the day here. The number of unique aircraft is fascinating. We hope you found this entertaining.

We always strive to be accurate on our website. We count on our readers to let us know if we made a mistake. Note that three in our family know more about this than we ever could. 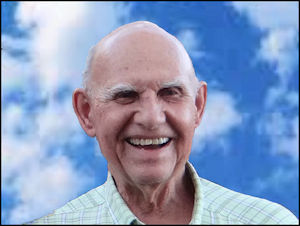 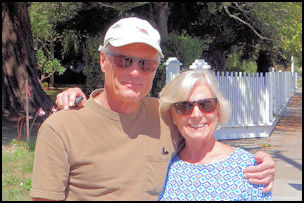 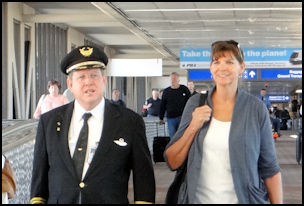 "As for the days of our life, they contain seventy years, Or if due to strength, eighty years, Yet their pride is but labor and sorrow; For soon it is gone and we fly away." Psalm 90:10