A special tribute to all our armed forces personnel


Our freedoms are precious and God given. Currently during the recovery from the COVID-19 crisis, many of our freedoms have been taken away. We understand that the states governors have taken steps they believe will protect their citizens. However, many of them have overstepped their authority with totalitarian restrictions that can remind you of England's control of the U.S. colonies in the 1700's. We thank God that He is the ultimate authority and has given us the right to self governance. Millions of men and women of our armed forces have fought for the freedoms we enjoy. We consider it a privilege to honor them this week.

We have never before repeated a travelogue, but this week we will. 10 years ago we published this and we think it will bless you even if you saw it back in 2010.

We start with the London Bridge in Lake Havasu. 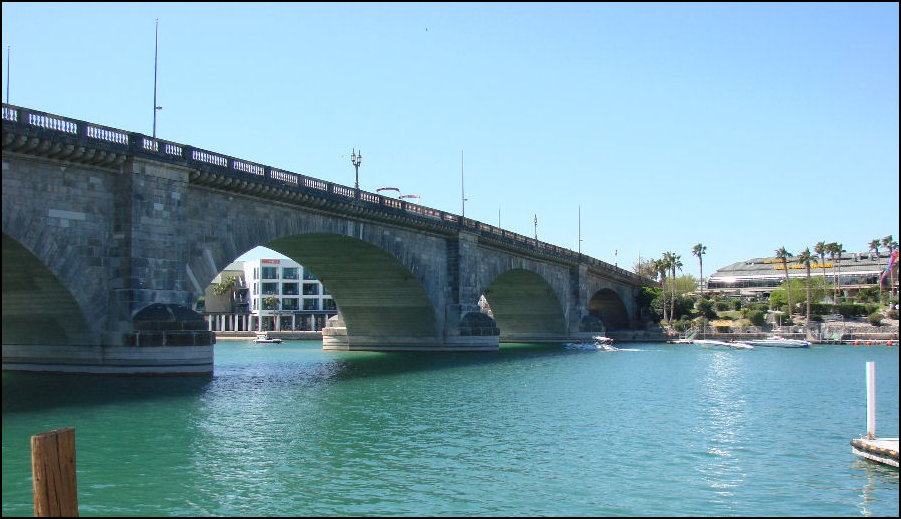 In March of 2009 we were fortunate to be in Lake Havasu, Arizona.  During our stay, there was a display called the "Cost of Freedom Exhibit".  This exhibit travels around the United States to honor the veterans of all  American wars. 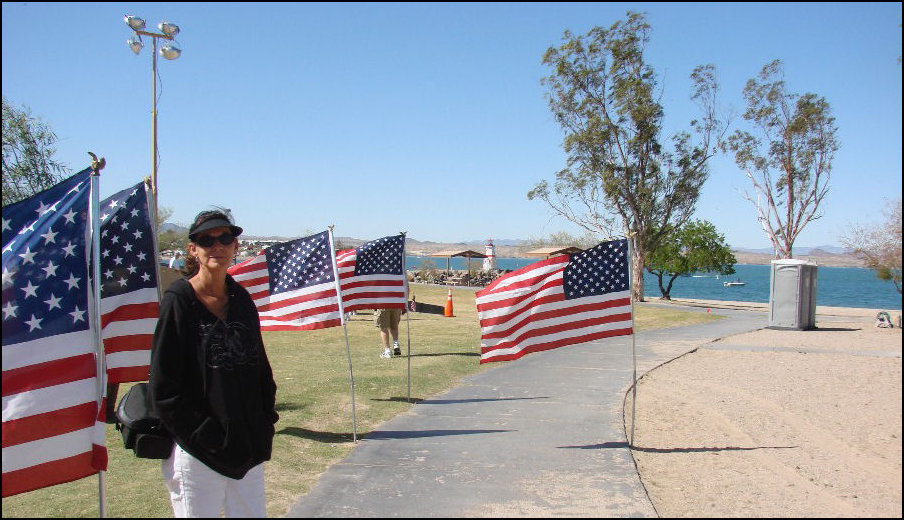 Above the exhibit flew a B-17 Flying Fortress, one of the few remaining in the world that are still flyable.

Each major war had a sandwich board with the number of troops who served, died, were wounded or were missing in action. 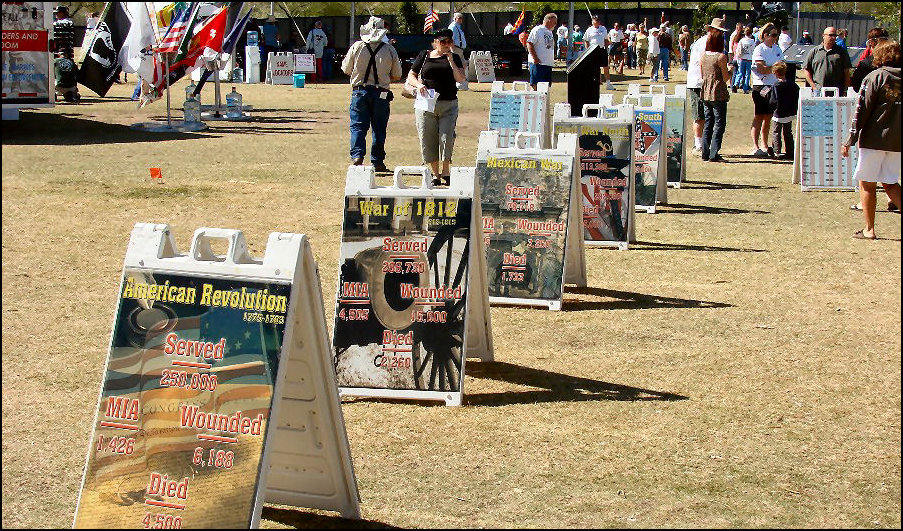 Since before the beginning of our nation, men and women have fought for the freedoms that we enjoy. 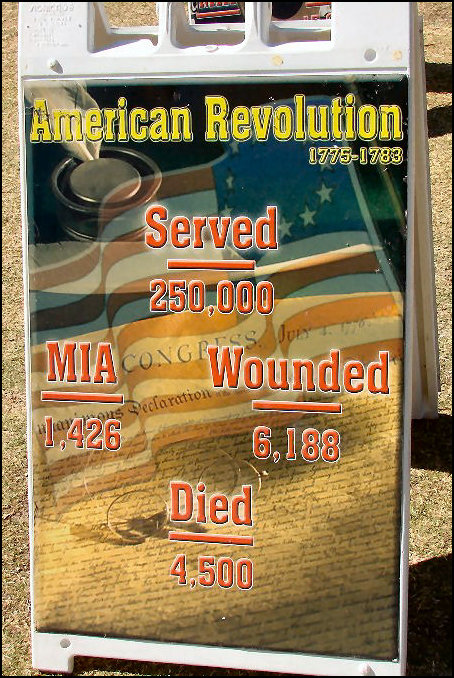 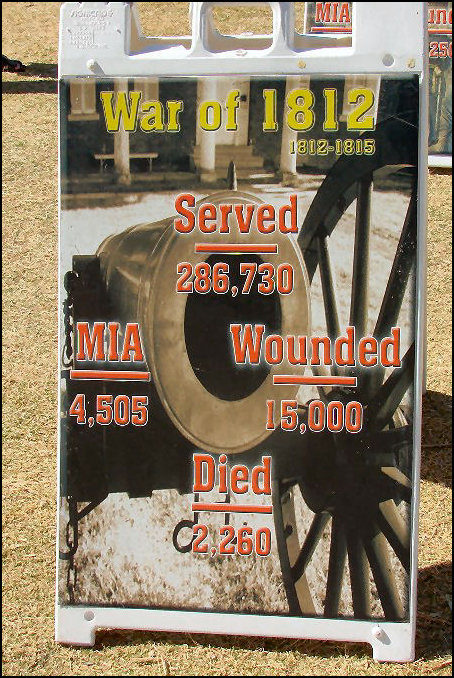 Freedom to speak out on all issues, including criticism of our government. 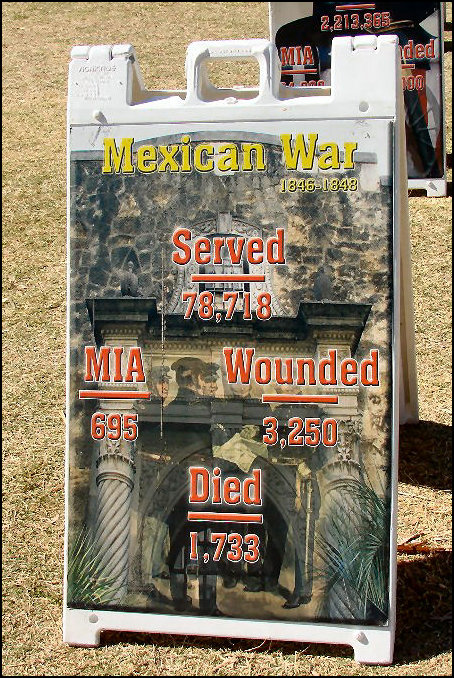 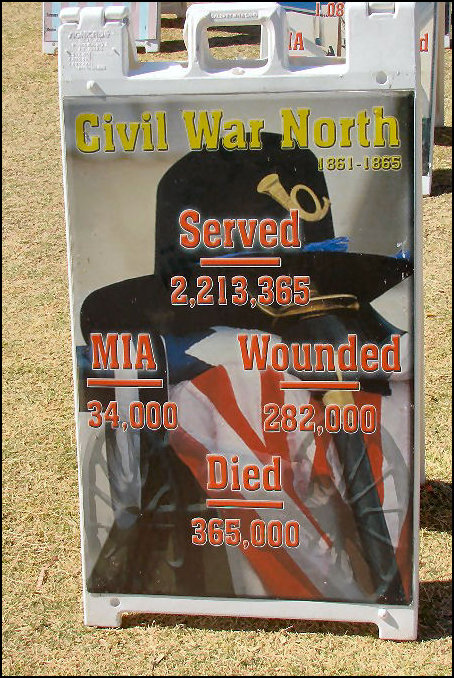 Freedom to practice our own religion without being stopped by the government or being forced into a national religion. 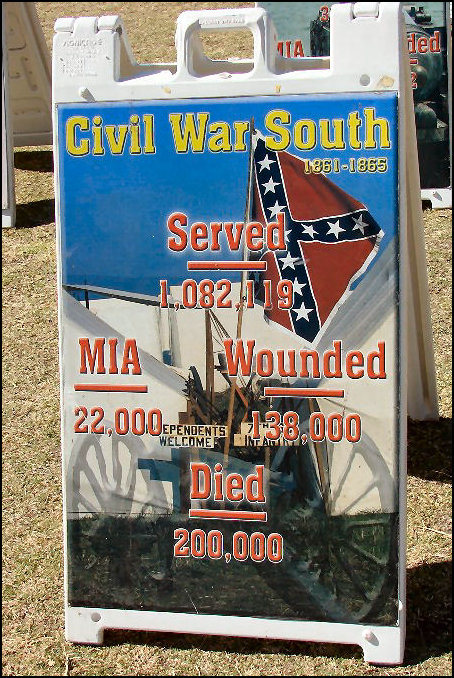 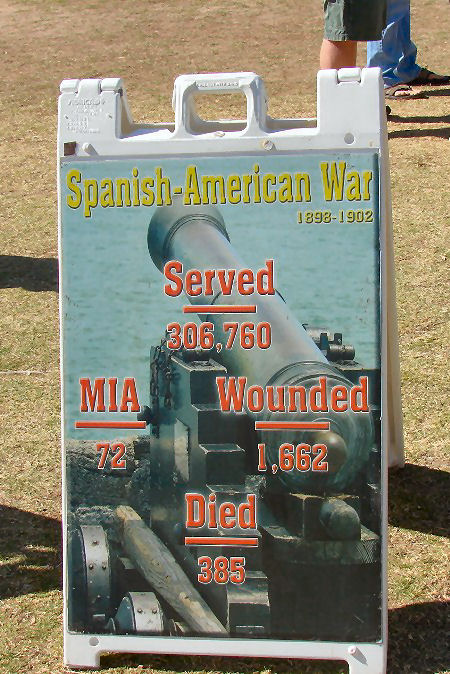 Freedom to own our property and create our own little paradise however we wish to define that. 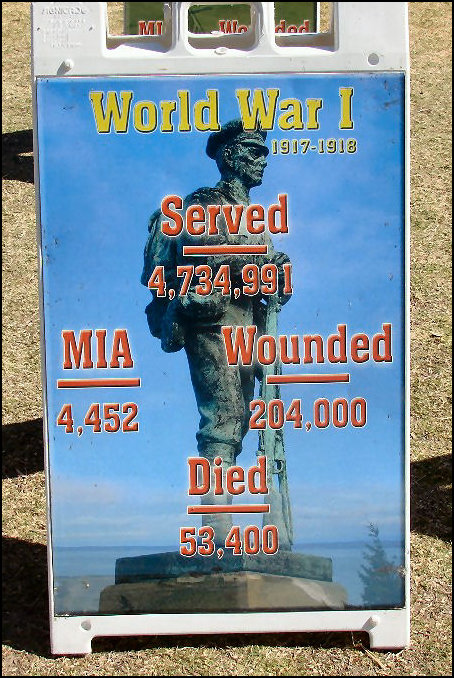 Freedom to pursue business opportunities of our own choice, to compete, at times winning, at times losing. 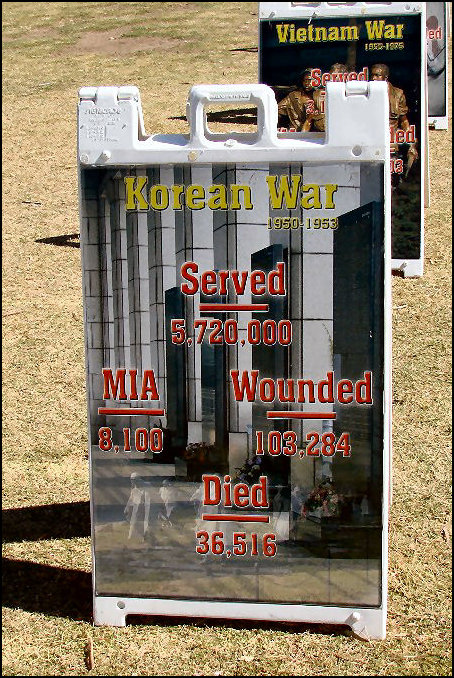 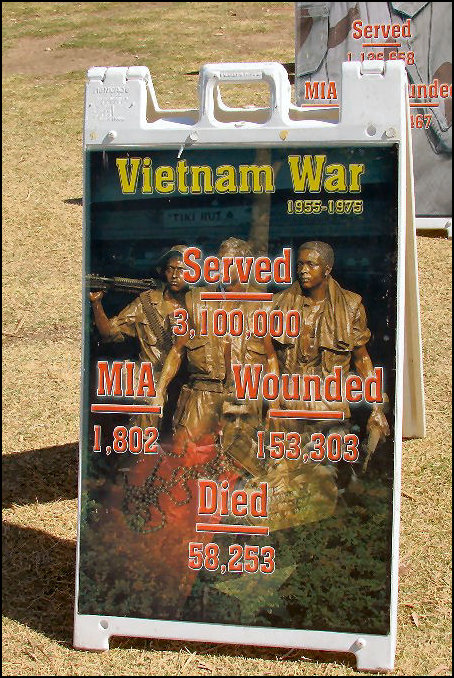 Our freedoms have been protected by the over 1 million veterans who gave their lives in the last 245 years.  And by the many more who were injured, were missing in action and by the millions that were able to return home safely. 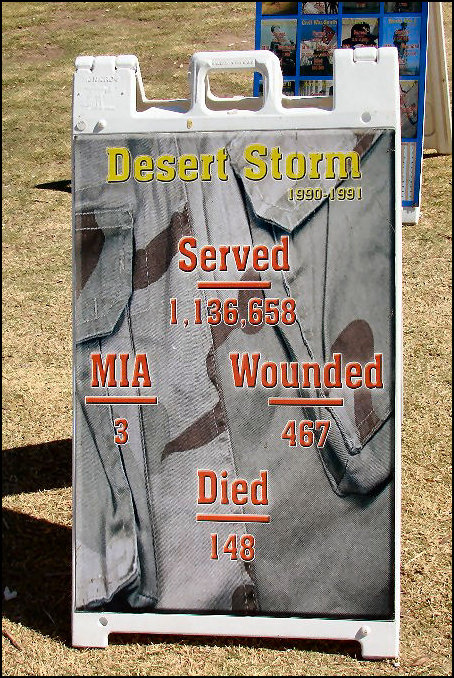 A 304 foot replica of the Vietnam Memorial Wall is part of the exhibit. 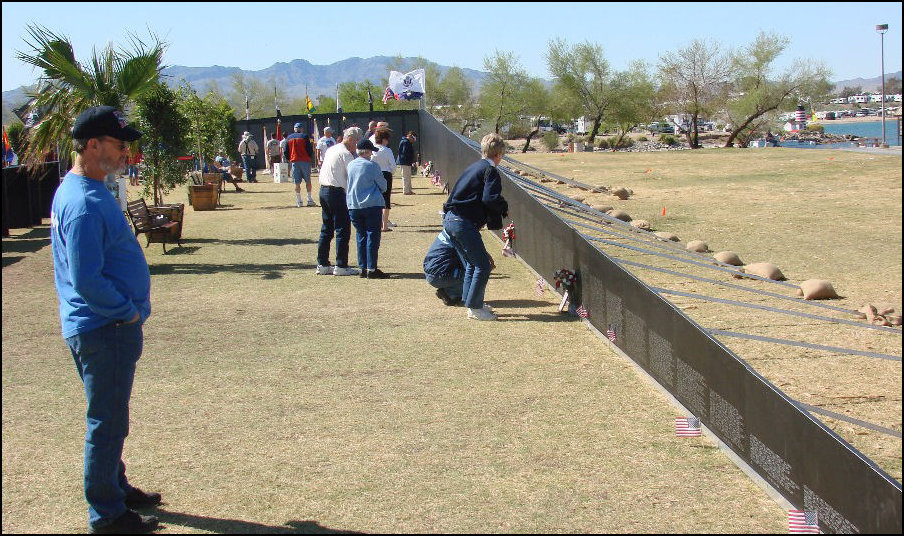 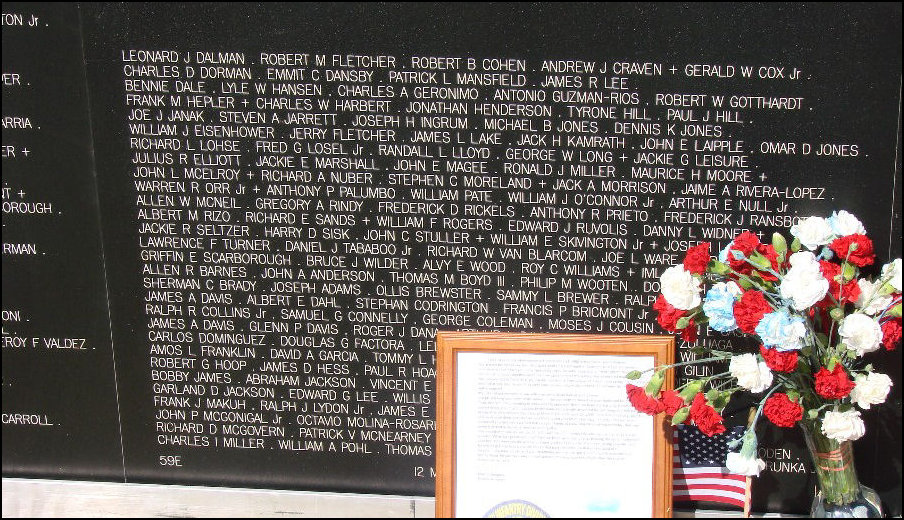 The Enduring Freedom display honors those who gave their lives helping to free the Iraqis from the oppression of Saddam Hussein.

Americans are the most giving people in the world.  We have a capitalist system that has allowed us to be the most creative and productive of all nations.  But we not only prosper ourselves, we give to those around the world.  We give the most during natural disasters with our relief funds and personnel.  And we give with our lives to allow other nations to enjoy the freedoms that we have grown to know and love. 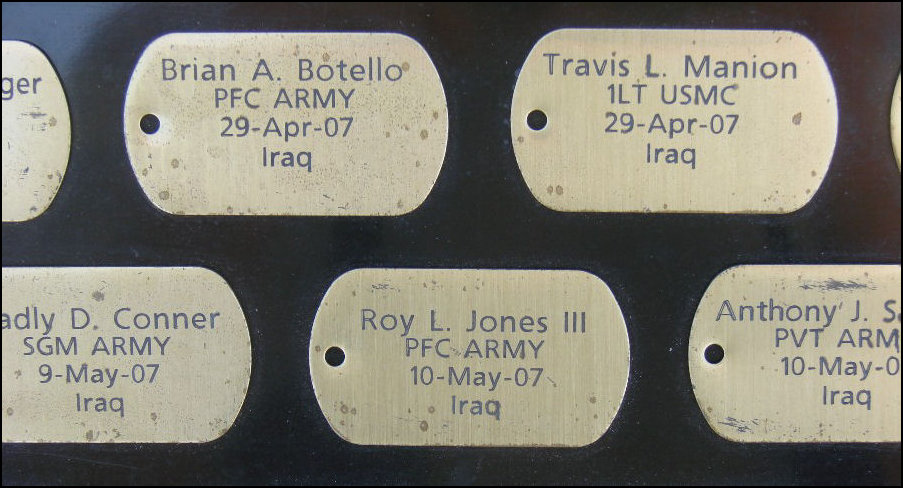 The following are the words of Jack Bernabucci, a resident of Palm Springs, written in 1997 and on the wall of the Palm Springs Air Museum It illustrates one of the aspects that sets the United States apart from other countries of the world.

"World War II was the greatest conflict in the history of the world. It was the first war that engulfed every continent on Earth and inflicted more death and destruction on people and nations than any other recorded event

However, the most notable result of World War II and the very thing that has been ignored by historians and scholars, is that the victors, the nations forced into war by the aggressors Germany and Japan, in the most compassionate and humanitarian action in history, rebuilt the devastated economies and the political and social structures of their defeated enemies thus enabling them to become the powerful democracies they are today.

It should be noted that following all previous wars, the victors ravaged their defeated enemies, taking all their wealth and property, holding executions and enslaving their population as the "spoils of victory".

The American people took no spoils or reparations in 1945; but rather assumed a great and heavy burden to insure that nothing like World War II would ever happen again." Jack Bernabucci, 1997.

The are numerous veteran's cemeteries throughout our country.  A visit to any of them will give you chills and a deep respect for our fighting men and women. 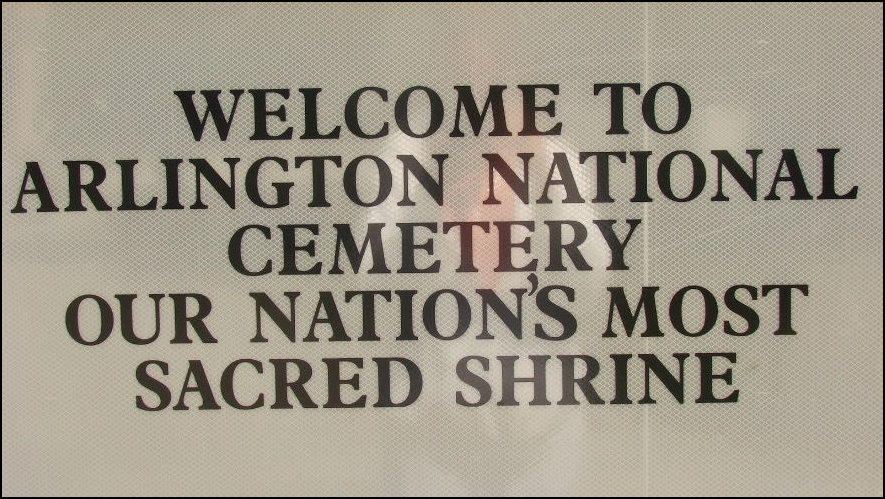 A view from Arlington of the Lincoln Memorial and Washington Monument. 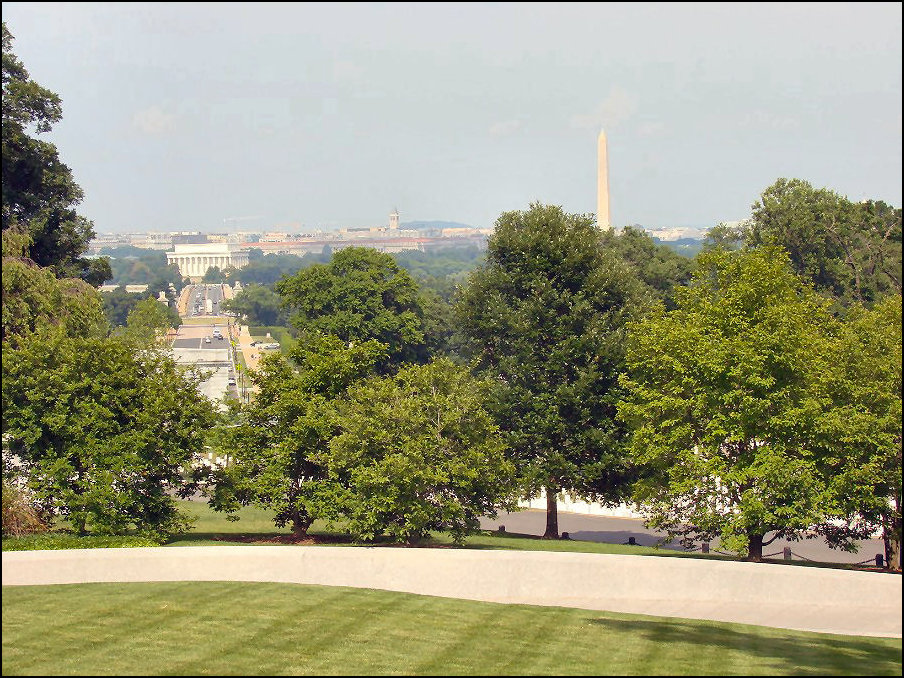 This photo shows a tiny portion of Arlington.

The resting place of John F. Kennedy, the 35th President of our great United States. 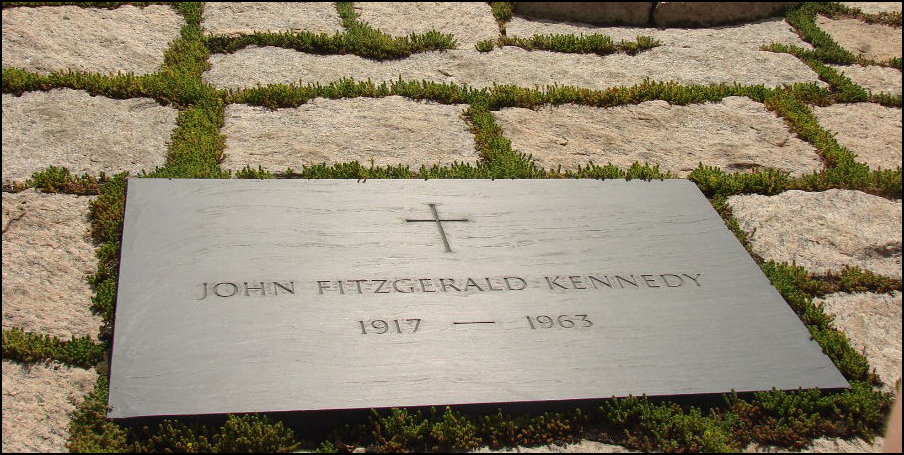 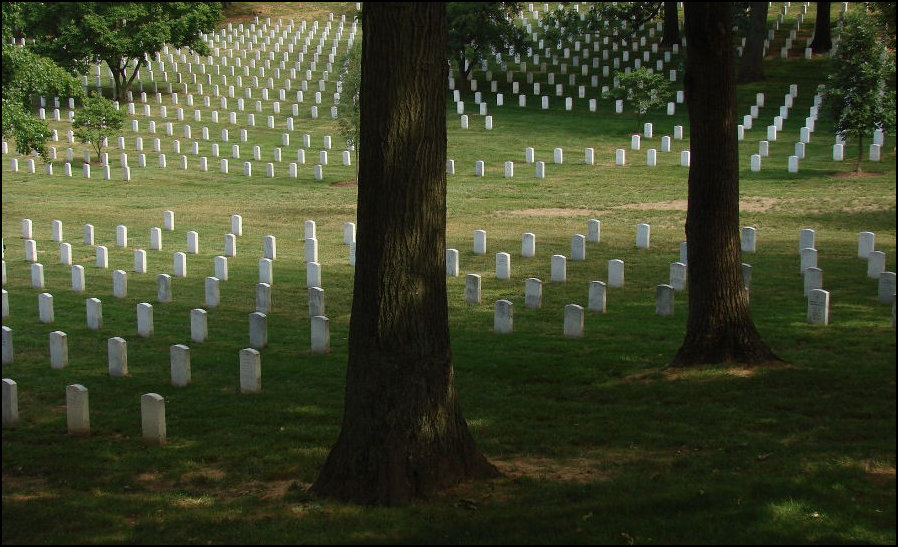 The tomb of the Unknown Soldier and the Ceremonial Guard.  It has been guarded 24 / 7 since July 2, 1937.  In the summer the guard is changed each half hour.  In the winter, every hour.  From the close of the cemetery until it opens the next day, the guard is changed every two hours.  It is considered one of the highest honors to be a guard and only 20 percent of those who apply are trained.  And only a fraction of those become guards. 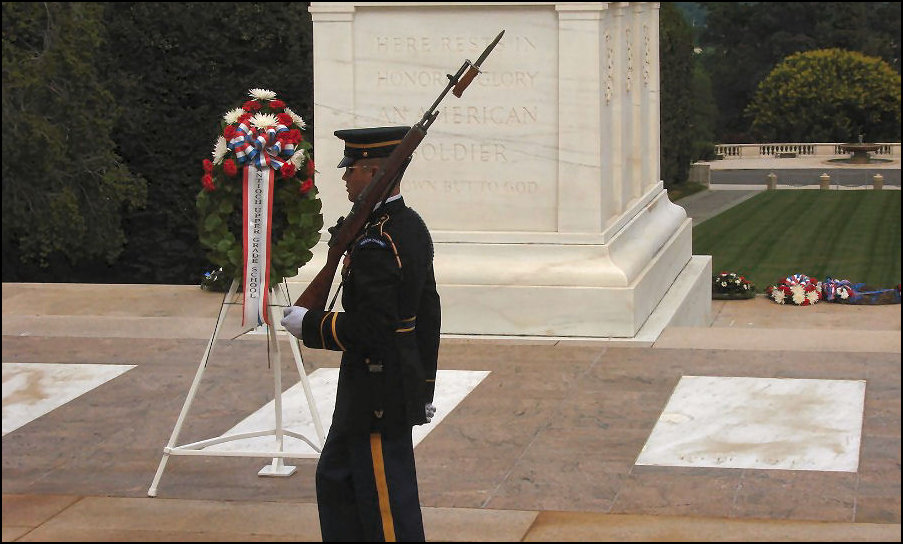 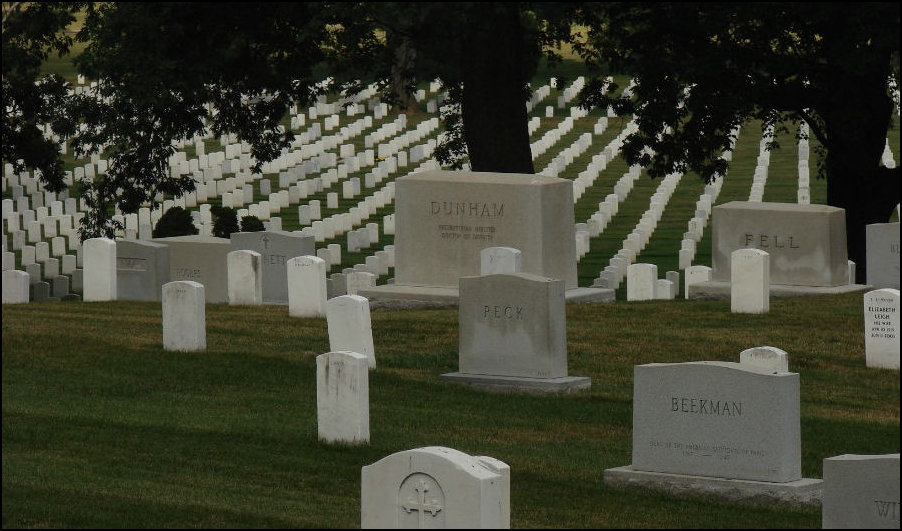 What a privilege it has been to make these visits and honor these soldiers.  In John 15:13 Jesus says, "Greater love has no man than this, that a man gives up his life for his friends."  Many here have given their lives to so many of us that they don't even know.  Take time each day to thank those in uniform. A simple handshake, a "thank you for your service" or so many other ways to express your gratitude for the freedom they give you.  Pete was touched by our friend Jeff at a Denver Rockies baseball game.  We were enjoying ourselves, watching the game and having our refreshments. There were three soldiers many rows down in front of us. Jeff asked the aisle vendor to go them and give them the refreshments of their choice and Jeff would pay for it. Pete remembers this each time he sees someone in uniform and it prompts him to honor them in whatever way seems appropriate.

God Bless America,
Land that I love.
Stand beside her, and guide her
Through the night with a light from above.
From the mountains, to the prairies,
To the oceans, white with foam
God bless America, My home sweet home.

Our prayer every Memorial Day is that you thank God for this country and honor those who have kept us free.