Top of the World to you,


This week we crossed the Yukon River at Dawson City and headed off to Chicken, Alaska. Since we entered Canada we have been in email contact with our SOWERS (Servants on Wheels Ever Ready) leader John and his lovely wife Rosie.  They were trailing behind us by about a week, also headed for Alaska.  With our side trip to Dawson City and Chicken, we arrived in Tok to find that they were there at a different RV park.   So we joined John and Rosie's convoy and followed them to the end of the Alaska Highway.  By the end of the week we all reached North Pole. 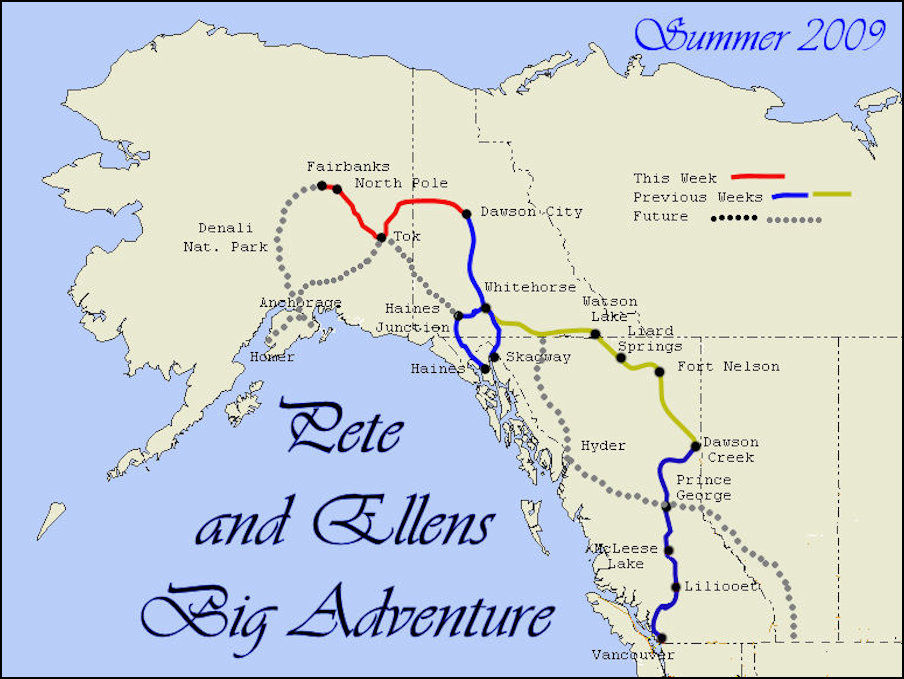 This was our view on the little ferry across the Yukon River.  No problems mate! 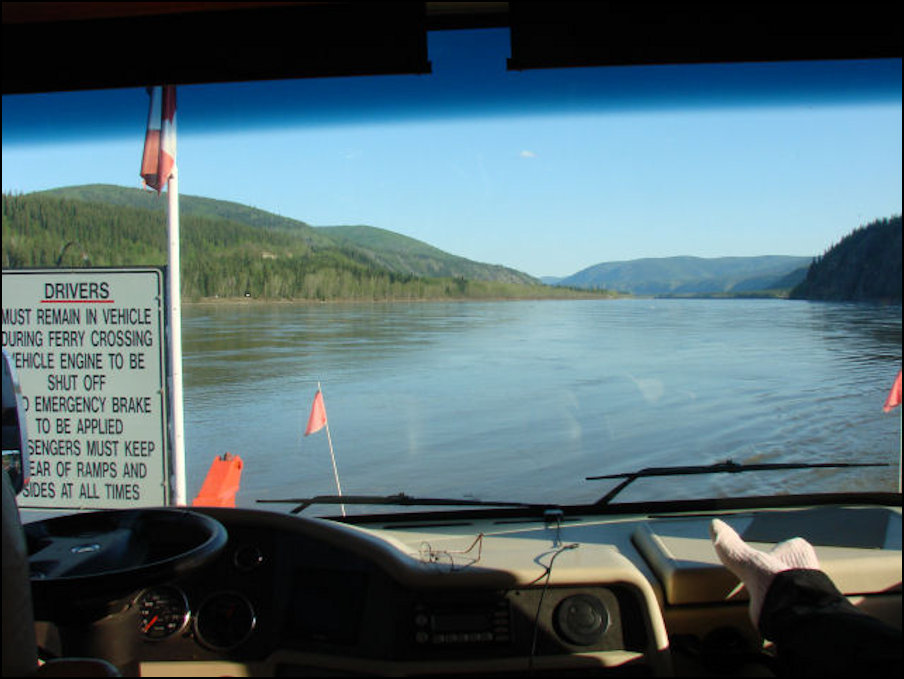 The Top of the World Highway is 109 miles from Dawson City to Chicken.  We were following shortly behind a group of 10 German couples in rental motorhomes.

As you can see the highway snakes it way along, mostly on or close to the crest of the mountains.  The 66 mile Canadian section, is 33 miles of payment and 33 miles of very smooth gravel.  Our slowest speed was 35 mph and the highest was 60 and that was on the gravel section!

At the 66 mile marker you reach Alaska at Poker Creek.  There was not a town or even a building, as far as we can remember on the Canadian side.  It was pretty exciting to see a city mileage sign.  Bound(a)ry was only 4 miles away.

But what a 4 miles!  Unlike the Canadian road, the USA side was 43 miles of dirt and gravel and looked more like a 4 wheel drive trail then a RV highway.

Boundry was one of the first roadhouses in Alaska established in 1903.  The building below, most likely, was the original roadhouse.  The store in the previous pictures has a sign indicating that gas is for sale.  Perhaps so, the pumps look to be in nice condition.  But as we passed we noticed the price per gallon was $1.269.  We didn't stop to ask.  If you would like to visit their store, you don't have to drive there.  You can land your private plane on the airstrip just a few hundred feet away. 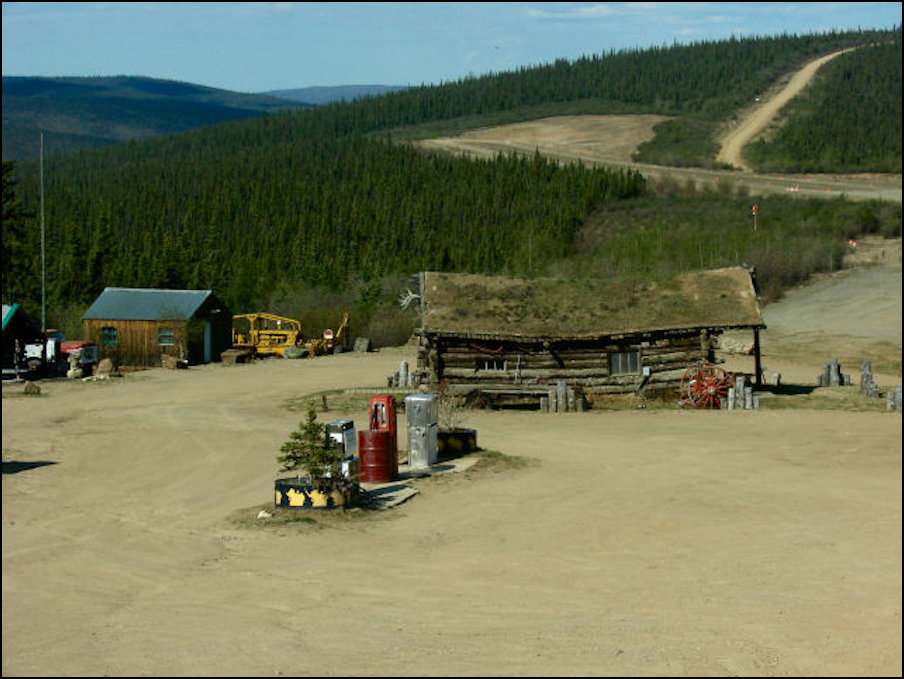 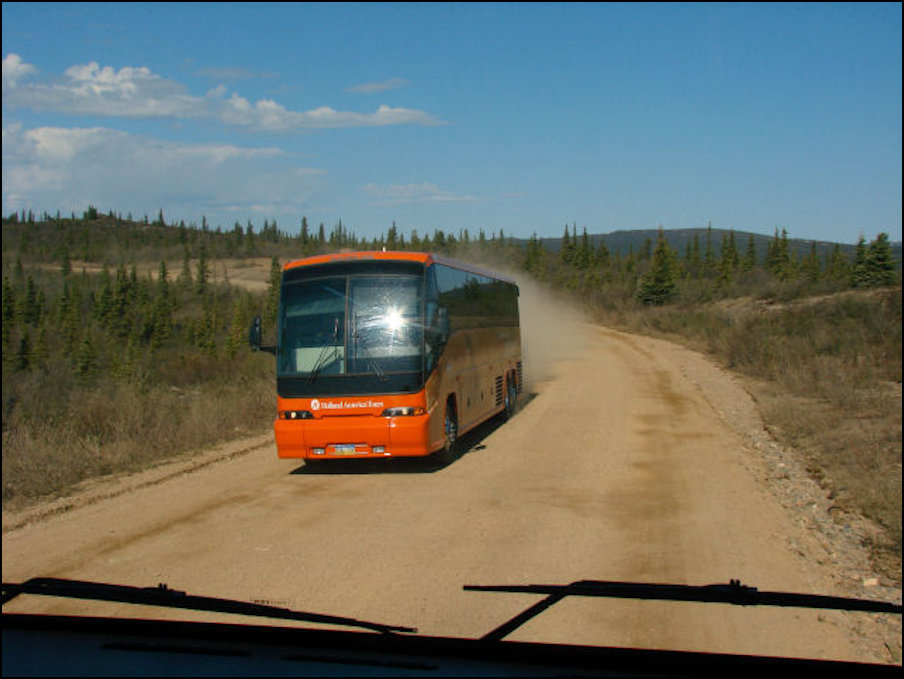 1) At 20 mph the ride was fairly smooth but the dust behind us would sometimes totally block any view out the mirrors and camera. 2) And finally a view looking down on Chicken.

The Alaska road department put up directions to Downtown Chicken as the main road bypasses it.  The locals however had a much more interesting idea.

Downtown Chicken is comprised of one building with three stores: The Mercantile Emporium, Saloon and Cafe.  The Cafe had free WiFi. 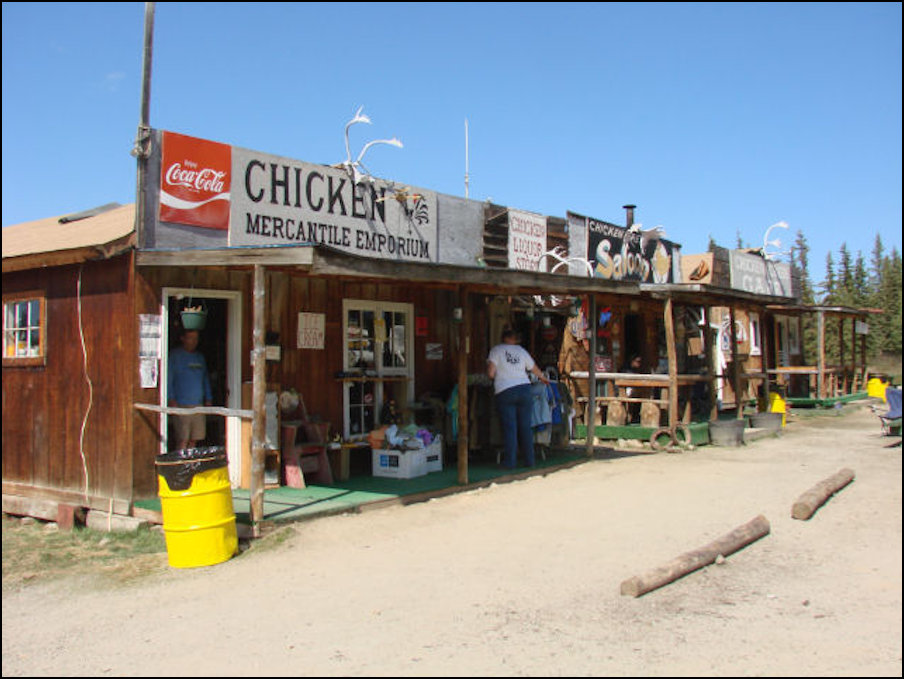 1) While mild, you can see the dip in the road caused by frost heaves.  2) Arriving in Tok we stayed at Tok Village which had a nice RV wash.  We washed the outside, taking a layer of dust off (see it in a picture below).  Ellen cleaned the inside as we would now enjoy paved roads, at least for a few weeks.

After meeting John and Rosie in Tok, we joined their caravan.  Here we parked at the Delta Meat and Sausage Co.

1) Pete with his favorite SOWERS GL (group leader) John.  2) The SOWERS stop for lunch at Delta Junction.  From front to back are: Naomi and Jay, Ellen (on camera) and Pete, Rosie and John and Stephanie and Gary. 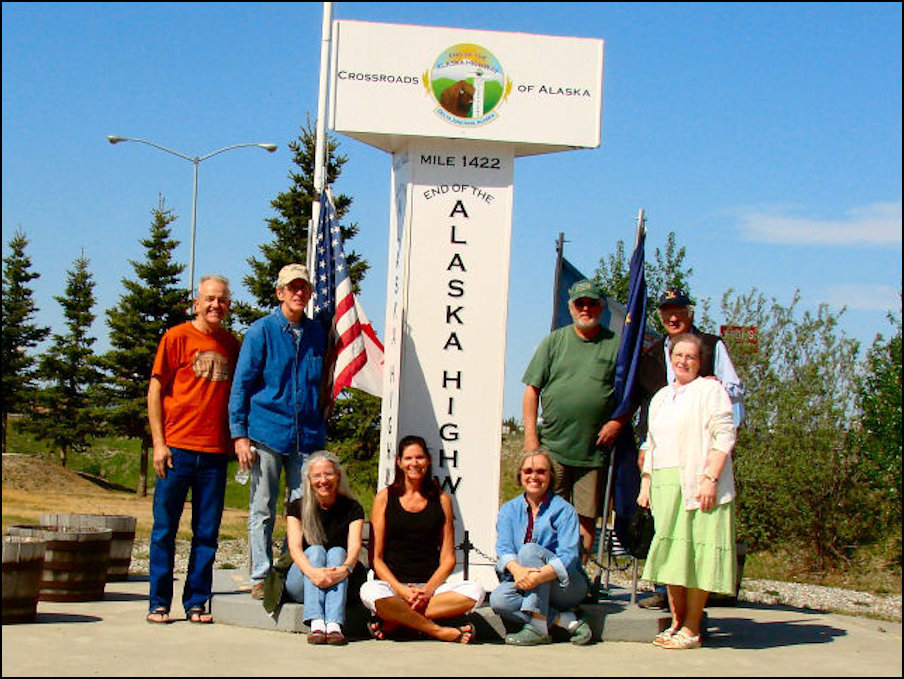 There was great fellowship at Rika's. Note: Bring or meet your own friends. 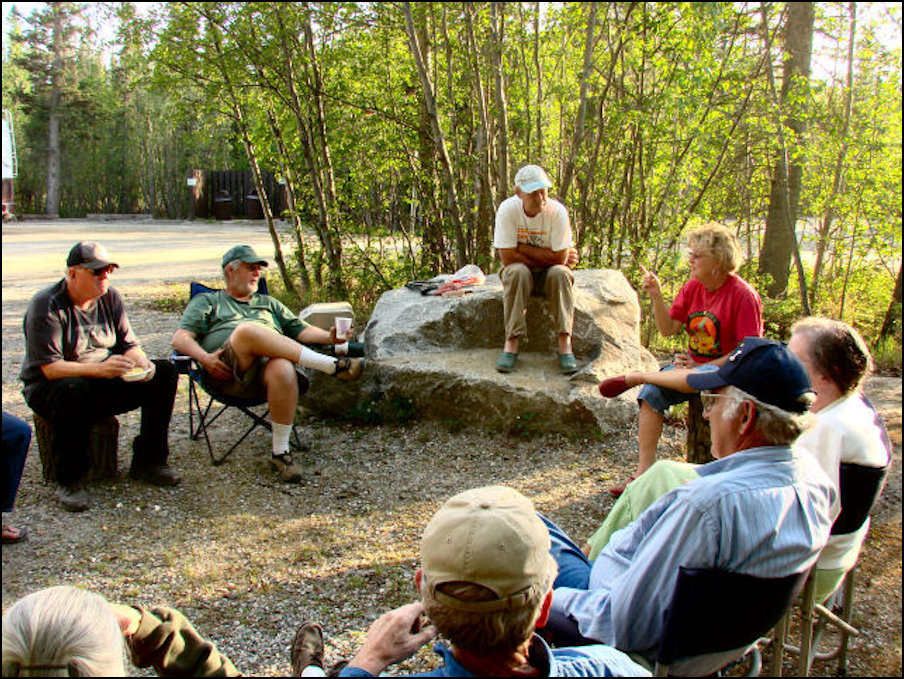 1) After 109 miles of the Top of the World highway (76 miles are dirt or gravel), we got a little bit of dust on the Mothership.  2) Servant John cleaned our air filter and left a 1/2 inch of writable residue on the railroad tie.

So that was the Alaska Highway. 1422 miles starting at Dawson Creek, Yukon and ending at Delta Junction, Alaska.  Well, not quite the whole highway.  Our trip on the Top of the World had us skipping 290 miles of the ALCAN.  And from all reports, that section is the worst of all the roads that we will have been on.  That report will come in August or September when we had back toward Canada.

Ellen got a photo of a recluse moose at Delta Junction. 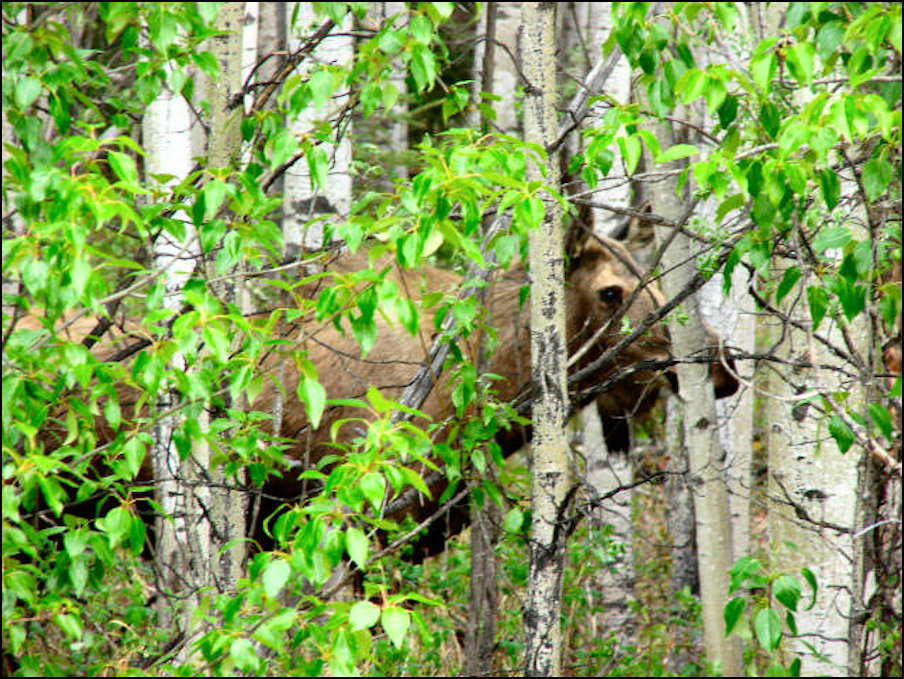 Aaaah, the end of a tough week of roads found us arriving at the North Pole.  One of Santa's reindeer is resting up as it is only 208 days until Christmas.  According to Wikipedia, Santa's reindeer must be women or boys as by December the older males have lost their antlers for the year. The photo of the reindeer looks like we converted it to Sepia, but we did not.  These were the actual colors.

Next week(s) we will join the SOWERS team in a project at Camp Li-WA in Fairbanks.  We will be completing the construction of the boys and girls bathhouses at the camp and other projects as directed.  You can always visit Alaska, but why not serve the Lord while you are there?