Hi from the Highest (the highest latitude we have ever reached),


This week we headed South from Whitehorse, Yukon to Skagway, Alaska.  Then we put the Mothership on the ferry to Haines, and drove North, to once again enter Canada.  We returned to Whitehorse for a second helping of the Halibut fish and chips at the Klondike Rib and Salmon.  From there we  trekked to Dawson City, the  gold mining boom town and original capital of the Yukon. 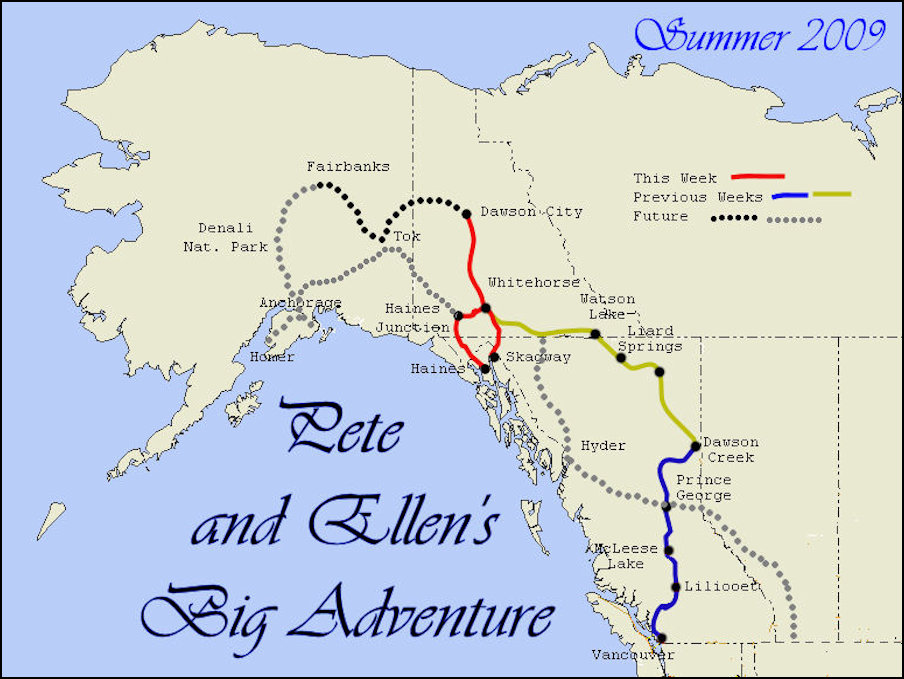 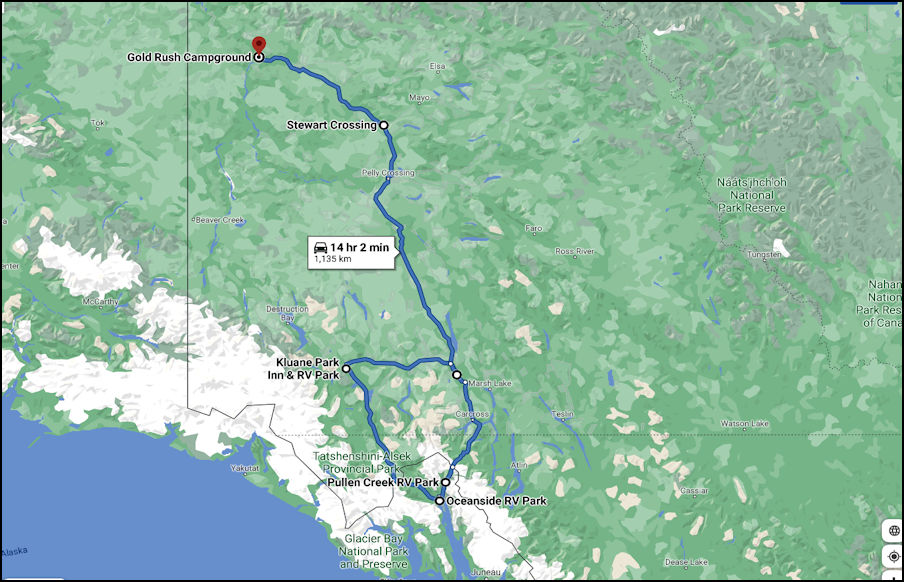 Terrific scenery on the Klondike Highway from Whitehorse to Skagway. 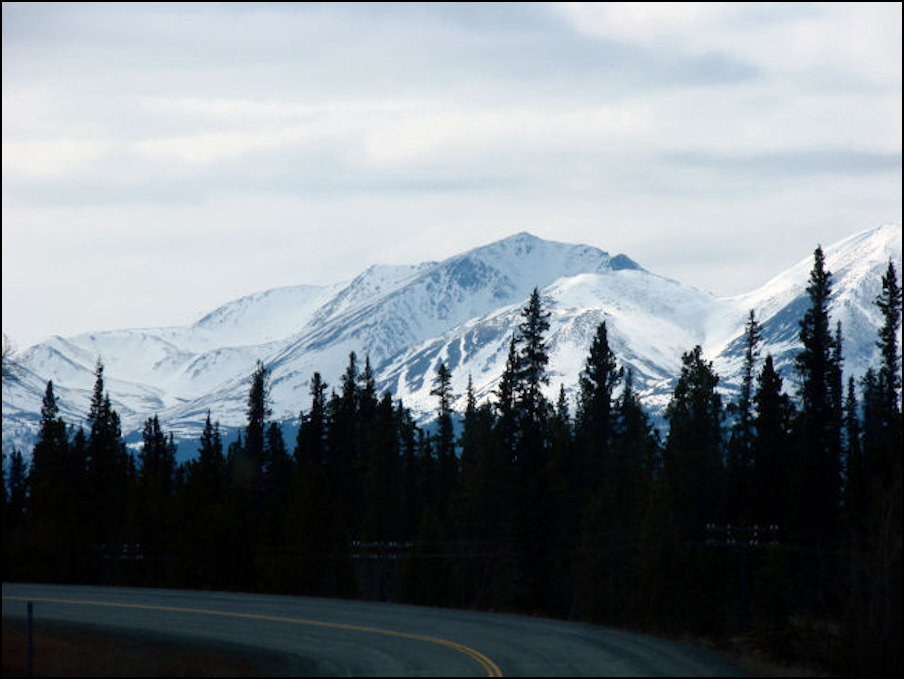 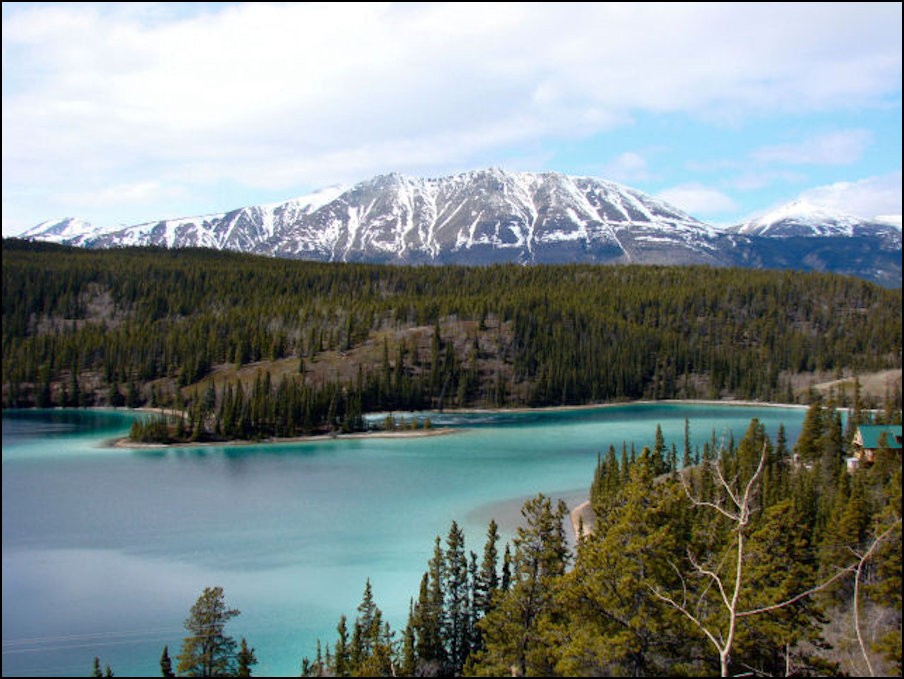 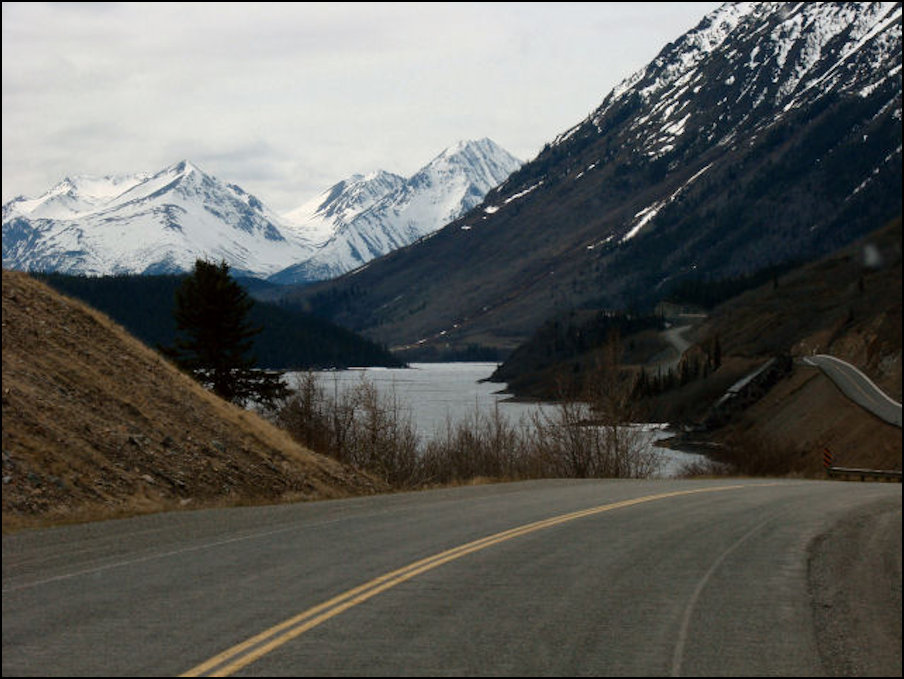 Skagway was first laid claim to by William Moore in 1887 under the name of Mooresville.  During the gold rush years, the population in 1898 swelled to between 8,000 and 10,000.  In 1900 Skagway becomes Alaska's first incorporated city, beating Juneau by one day.  In the same year the White Pass & Yukon Railroad was completed connecting Skagway to Whitehorse.  In 1942 the U.S. Army took over Skagway and used the railroad to carry supplies for the Alaska Highway.  The army also built a pipeline that paralleled the railroad to carry fuel to Whitehorse.  Hmmm, the first Alaskan Pipeline! Today there are 840 tourist season residents, between May and September.

1) Arriving in Skagway, our RV site had a view of the Carnival cruise ship.  2)  Even with the ship in town, the streets were rather empty.

But that all changed the next day when six cruise ships docked.  And for the day the population of Skagway was 14,840. 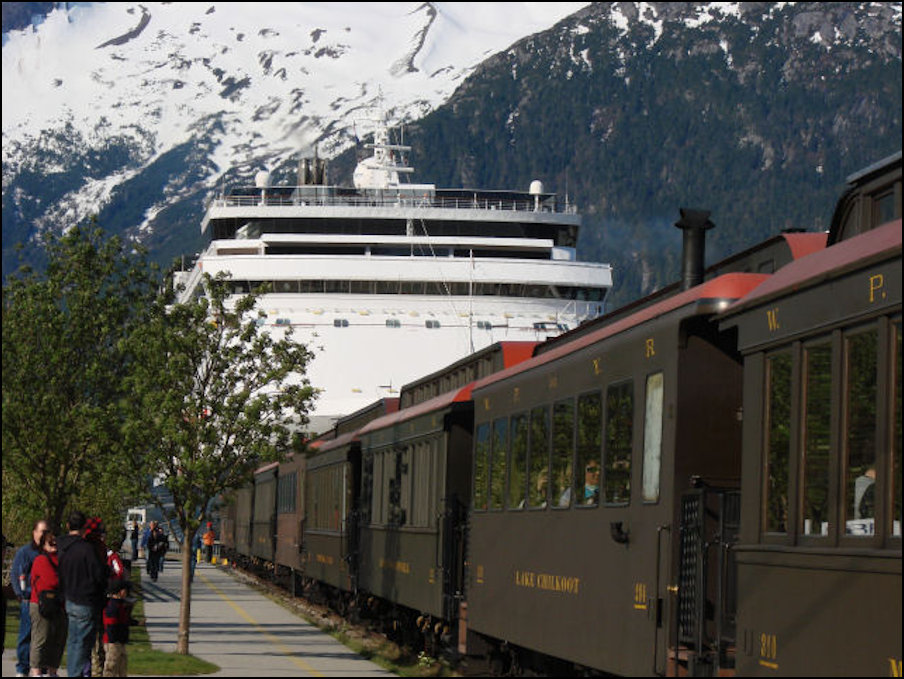 1) In Skagway, when they say the ship is in town, they mean the ship is in town!  2-4) In 24 hours the streets went from empty to filled with tourists taking train tours, bus tours, jeep tours, town car tour, horse and buggy tours or just plain walking down the wooden sidewalks.

A sampling of the many dozens of renovated shops in the old town section of Skagway. 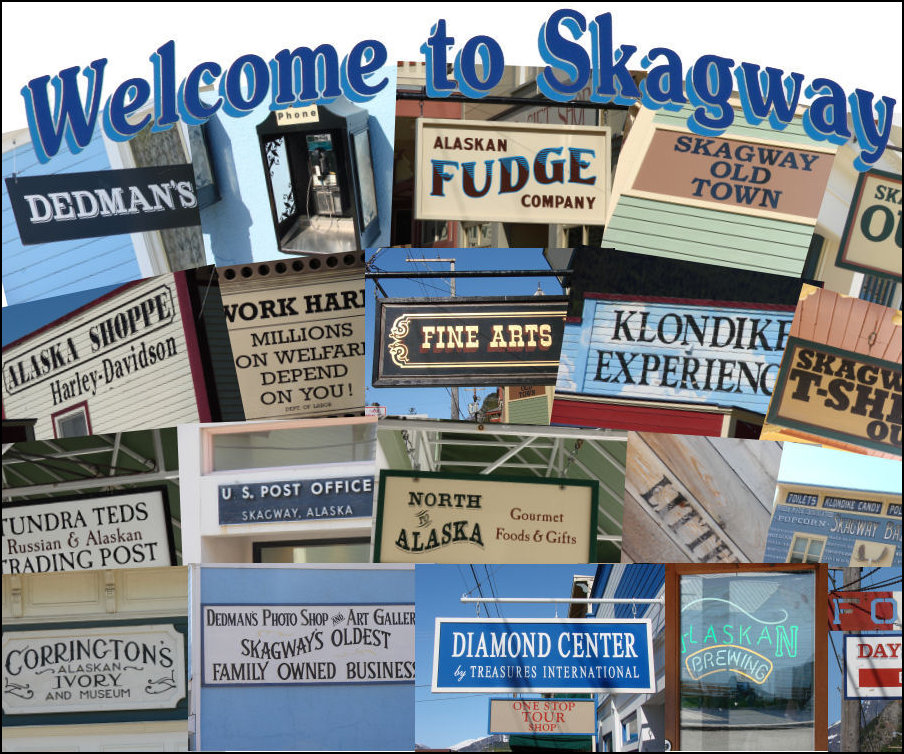 1) On our third day, again surrounded by cruise ships, we loaded the Mothership onto the ferry bound for Haines.  2) While waiting on the dock to be loaded we met Jim & Marilyn and Dave & Terry.  The four live in Denver, but for the second year in a row, they flew to Iowa and drove new MinniWinnie 22' motorhomes to Alaska to deliver them to a rental company.  In the two hours we spent with them, they become great friends and we hope to see them again.

1) The views from the ship and Haines are fantastic with the snow-covered mountains descending right down to the water's edge.  2) Our new friends head up the highway as we stayed behind in Haines.

Haines was named for Francina Haines, a Presbyterian missionary who visited the area in 1879 to scout out a location for a mission and school. In 1902 due to ongoing border disputes with Canada, the U.S. Army established Fort Willian H. Seward.  Haines population today is around 1,600.

1) While visited by many tourists, Haines is a town where many come to live in the summertime, not just to be catered to or to cater to tourists.  2) We got a 90 minute town tour from Ruth; you'll meet her a little later.  This is view of the town from a rather secretive and the highest road in the town.

This view shows many buildings of what was first named Fort Seward.  To avoid confusion with the town of Seward, the name was later changed to Port Chilkoot. 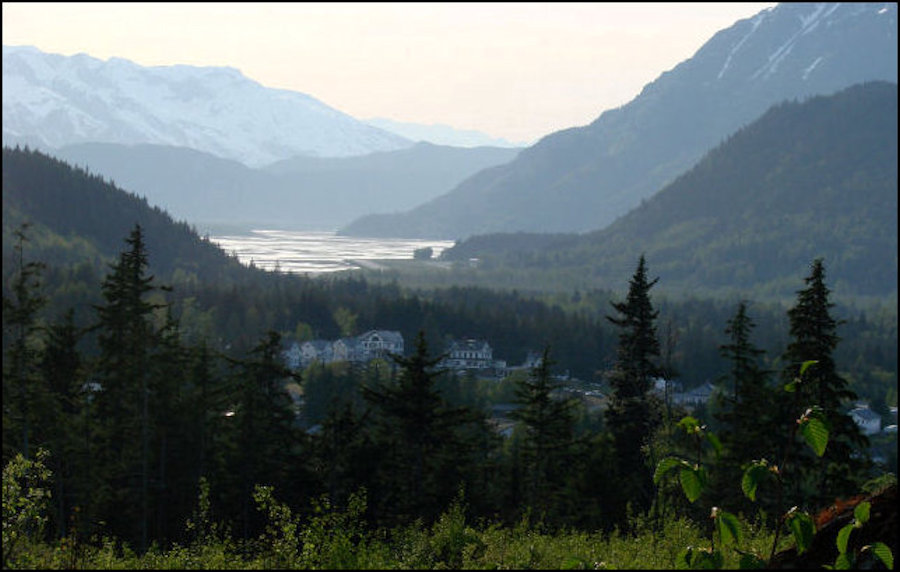 This home is a restored Fort Seward officer's quarters.

The highlight of Haines are the bald eagles.  Of the 40,000 eagles in Alaska, 3,000 of them make their home in and around Haines and the Chilkat Valley.  We never would have gotten these photos if Ruth did not offer us her free 90 minute tour. 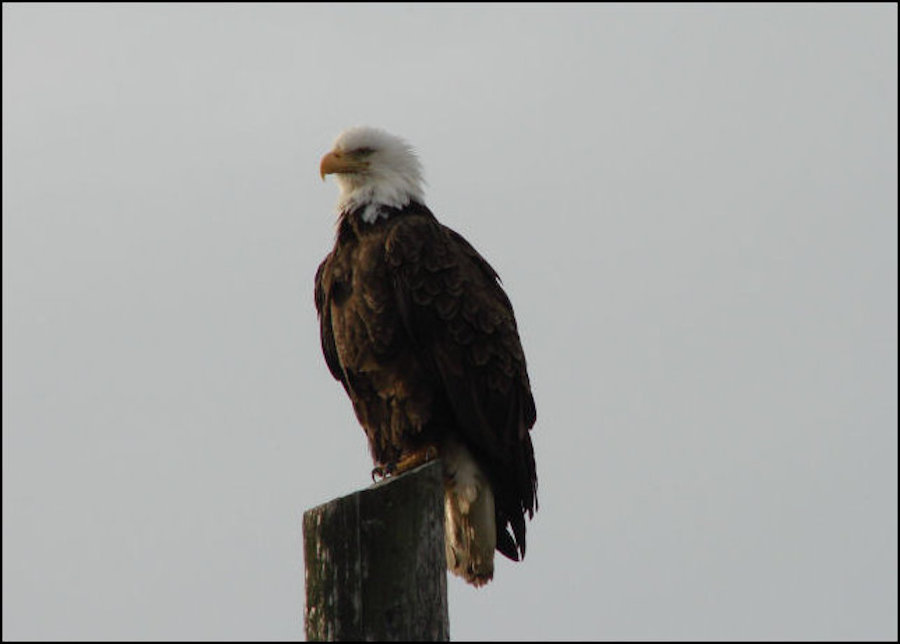 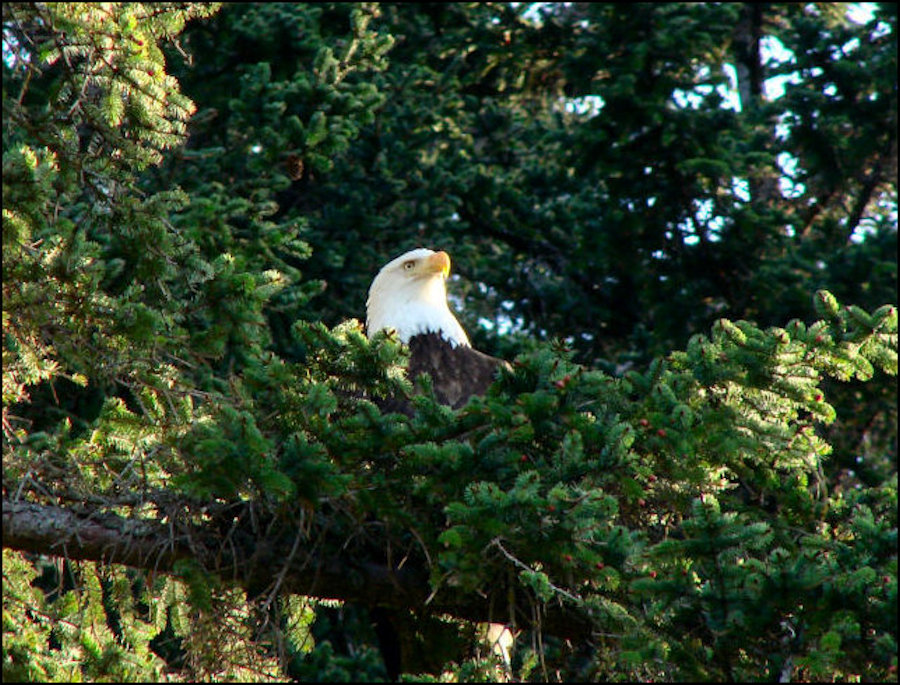 1) This is our RV site at Ocean Side RV park. 2) Ben and Ruth are the RV hosts.  While we were in their little mini-store, Ruth just asked if we would like a free tour.  She took us up the highest road for views and throughout the town.  When Ben and Ruth were about 60 years old, they visited Haines and loved it.  Ruth made the comment at the salon one day, "if I were 10 years younger, I would move to Haines".  Well, they visited over and over and at age 65 they moved to Haines for the summers.  Now at 75 they tell everyone to stay out there and follow your dreams, you are never too old.  Ben is a pastor and they are involved in Christian ministries in Haines.  They made Haines come alive for us.

The RV park is right next to the marina.  The cruise ships stop off here after they go to Skagway. 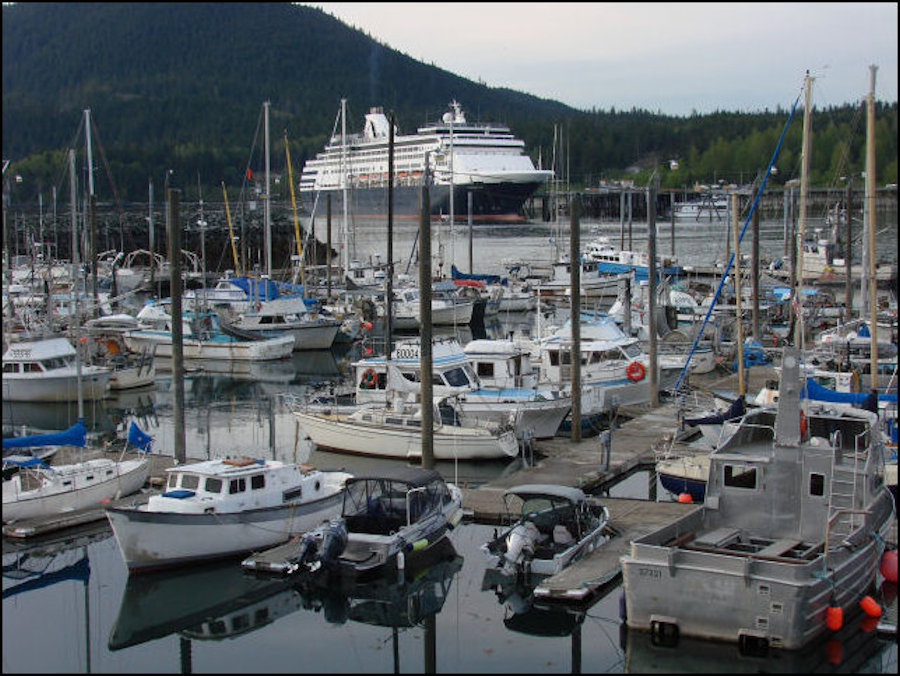 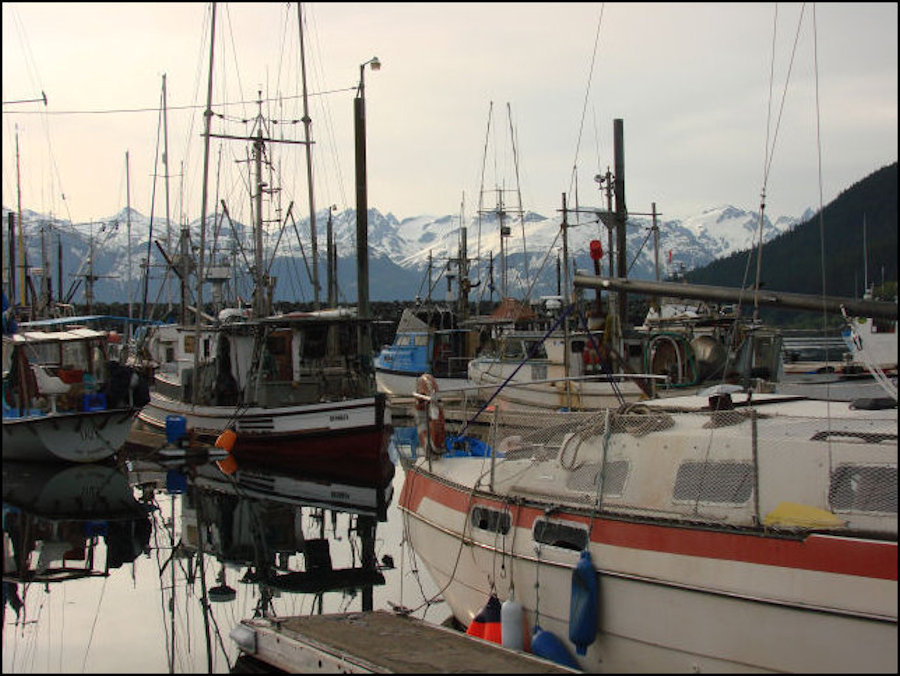 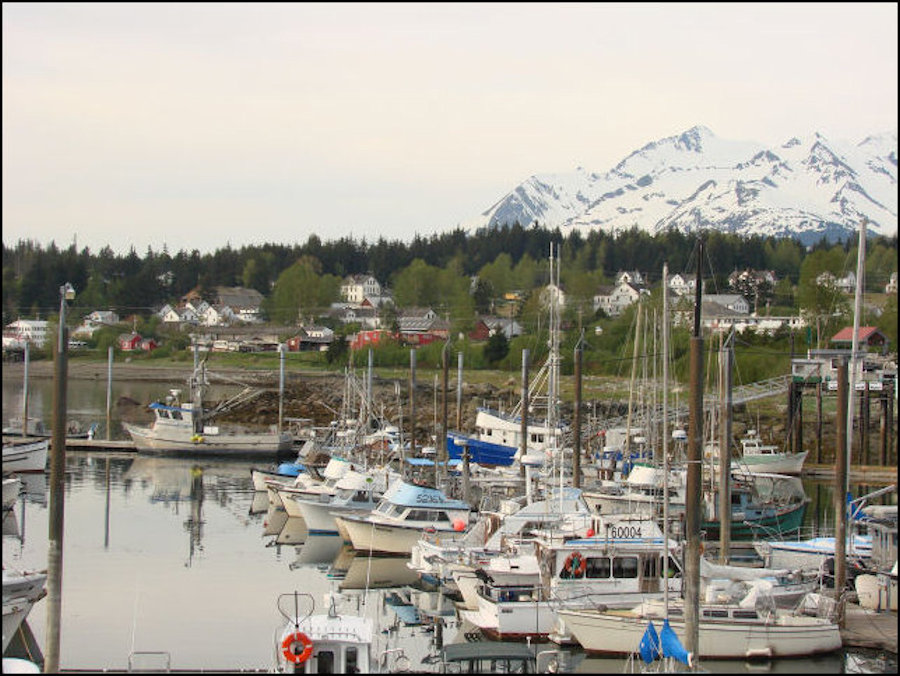 Two bald eagles watch over the marina as the ship approaches. Ruth says that there usually four, one on each post.

The 146 mile Haines Highway from Haines, Alaska to Haines Junction, Yukon is varied and beautiful.  We could show you thousands of pictures of continual beauty.  In the lower 48, we used to stop at scenic viewing areas, here you just click your shutter every few seconds and keep on driving.

Along the 322 mile road from Whitehorse to Dawson City, there are almost no towns or buildings.  We drove over the bridge at Pelly's Crossing and dry camped along the river for an evening.  For the 16 hours we were at this site, one car stopped briefly and only 10 cars drove by all day.  Well, it really was not daytime, but nighttime.  While this photo was taken at 5 pm, it would look just the same at 11 pm, getting darker by two in the morning.

Dawson City was the heart of the Yukon Gold Rush and the original capital of the Yukon Territory.  Gold was discovered in 1896. During the 1900's gold mining era there was not a road to Dawson City.  All passengers and cargo came from Whitehorse to Dawson City by paddle boat. By 1953, Whitehorse (on the railway and highway and with a large airport) was so much the hub of activity that the federal government moved the capital from Dawson City, along with 800 civil servants. Some recompense was offered in the form of a road linking Whitehorse with the mining at Mayo and Dawson City. With its completion, White Pass trucks replaced White Pass steamers.

Dawson City is a mixture of old buildings in need of maintenance, restored buildings as seen below and abandoned buildings.

The nicely restored Diamond Tooth Gerties is a combination of gambling hall, restaurant, saloon and nighttime entertainment.  Gertie (Amy from Nova Scotia) sings.  The four dancers came into the audience and pulled men onto the stage.  Stephanie came down and grabbed Pete  to teach him the can-can.  He was rewarded by getting to remove and have her garter! 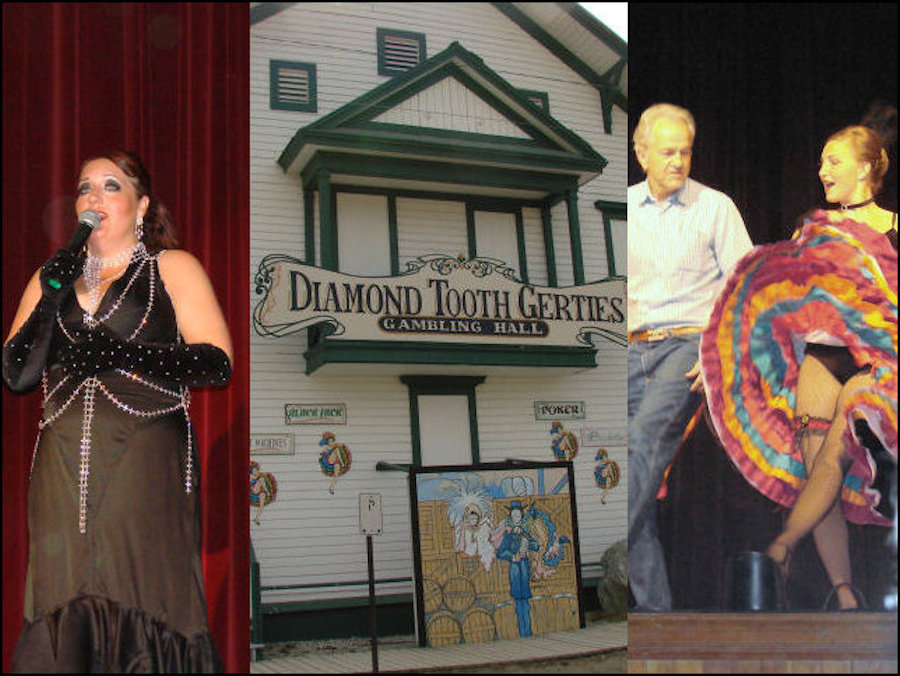 A favorite trip for the town folks is the five mile drive to Midnight Dome.  When the first trip was taken, it was the desire of those who hiked up the mountain to see the sun setting at Midnight.  But the hikers reached the summit at Midnight only to find out that the sun had set at 11:30 pm.  It is light all night, but the sun was gone.  During our trip the clouds dimmed the view.  It is recommended that you take the trip whenever the skies are clearest. 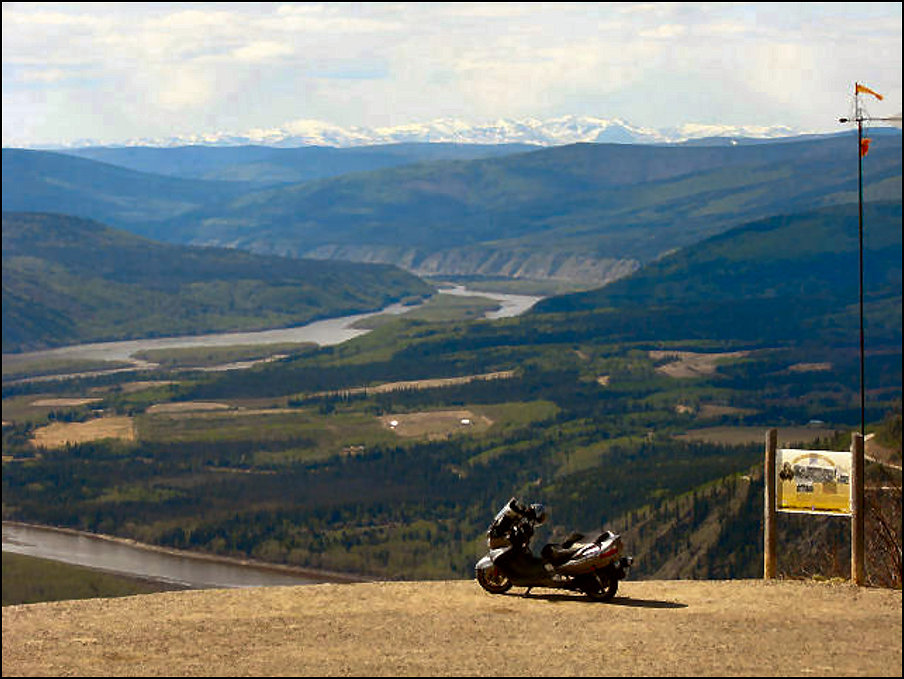 These buildings are in their original condition.  The leaning buildings resulted from being built on permafrost.  "Permafrost is soil at or below the freezing point of water for two or more years" (Wikipedia 05-27-2009).  The problem of building over permafrost is that the heat from the building can cause melting and at different rates.  Thus buildings can sink evenly or lopsided as shown in the second photo.  Many of the roads in the Yukon are affected by "frost heaves".  These are sections where the permafrost has partially melted causing roller-coaster dips or breaks in the asphalt. A thick layer of gravel, from 3 to 6 feet, can insulate a building or road from the permafrost to prevent thawing.  Most of the current Alaska Highway is built on gravel.

Next week we will take the free ferry across the Yukon river and travel the Top of the World Highway to Chicken, Alaska.  Is it just us, or does that ferry seem a little small for that motorhome?

Have a blessed week.  From God's creation, love Pete and Ellen