After leaving the hustle bustle of Washington DC,  we were looking for a little peace and serenity, so we headed for the ocean. We went to Atlanta City, NJ and looked for a place to park for the night. We didn't get a good feeling down by the water, so we went uptown to Harrah's where they allowed us to park in the valet parking area. We spent the night there and then headed to Princeton, NJ to visit the University that Ellen's nephew, Ray,  graduated from a few years ago. It is a beautiful school. We went to the University Store and they still have a banner of Ray, playing basketball. They promised to send it to Ellen's sister when they take it down.

Then we tried to get into New York. Needless to say, it is not a motor home friendly state. The one campground nearby was booked way in advance, so we ended up 70 miles away in Florida, NY, where they wouldn't even let us unload our scooter, so we had no way to get around. We left that campground and went to Watchung NJ and stayed at a nice Elks lodge with electric hook ups.

Friday evening we drove our scooter three miles to the New Jersey transit, which took us to Newark Penn Station where we switched trains and went into the New York Penn Station at Madison Square Garden. We headed to the Coach Fashion Headquarters in NYC where Stephanie Fair-Layman  works. She is the daughter of our good friend Paul Layman. She moved to New York two months ago. We walked with her through Soho, Greenwich Village and Little Italy. We stopped for dinner at Le Esquina (The Corner) where people were eating outside on the patio, and inside at a casual cafe. When we asked for a table, we were asked if we had reservations. We said, "No". So he made a call, and then told us to go through an old door that said "Keep Out" "Employees Only", down an old stairway, through the kitchen, and into a charming little restaurant that served great mexican food at unbelievable prices. It was quite an experience. We highly recommend the restaurant. We had desert at Caffe' Palermo on Mulberry Street in Little Italy. The owner, Johnny Rocks, came up and gave us a CD he had made. We walked back along Broadway, rode the subway, saw Times Square and finished off the night by running top speed  through Penn Station trying to find which track our train was on. We boarded with only seconds to spare, just like in the movies. Our thanks to Stephanie for such a great night on the town.

Saturday and Sunday we took the Gray Line New York Open Top Sightseeing tour bus that allows you to get off and on at any stop. We toured Restaurant Row, The Lincoln Center, Museum Mile, Central Park, Columbus Circle, Harlem, Apollo Theater, and The Empire State Building on Saturday. On Sunday, we toured Times Square, the Broadway Theater district, City Hall, Brooklyn Bridge, World Trade Center site, Battery Park, United Nations, Waldorf Astoria Hotel, Rockefeller Center, Radio Music Hall, and took the ferry to the Statue of Liberty and Ellis Island. Even with all the walking and bus touring, we had no idea how big New York City is until we looked down from the Empire State Building. We barely scratched the surface in our three day visit.

Atlantic City, New Jersey (not recommended).  The Harrah's Hotel lights up in hundreds of different patterns.

We traveled through Philadelphia but got there too late to visit sites.  The building below has been painted with a hanging flag.  Cool! 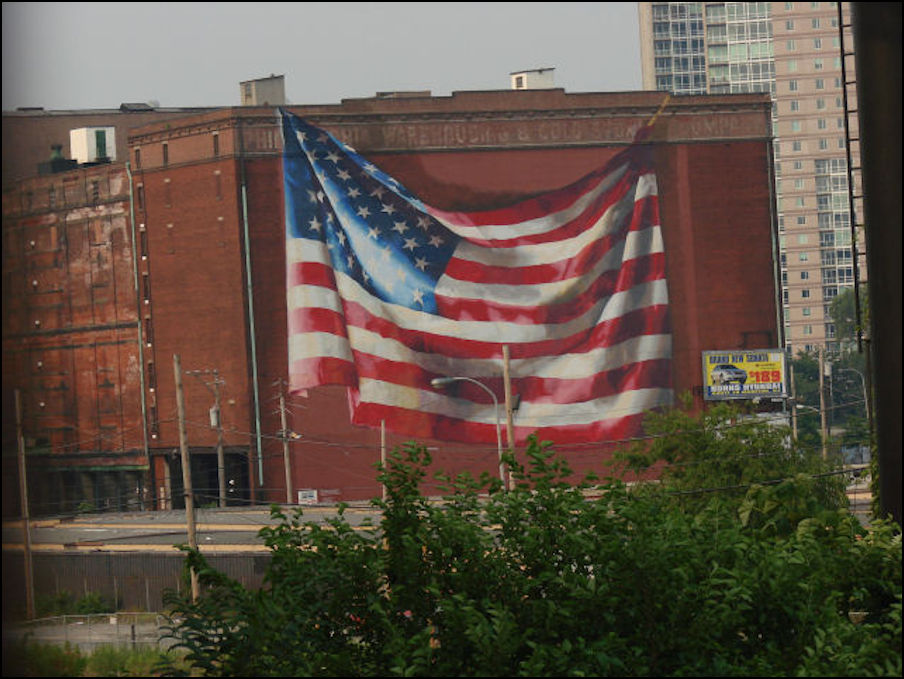 Princeton University has an incredible collection of beautiful buildings. 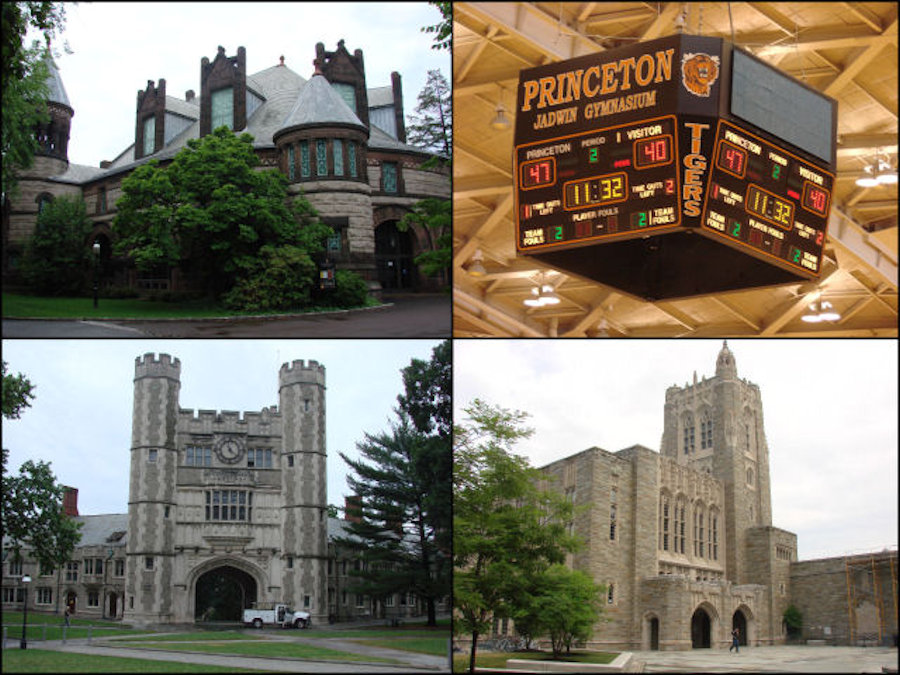 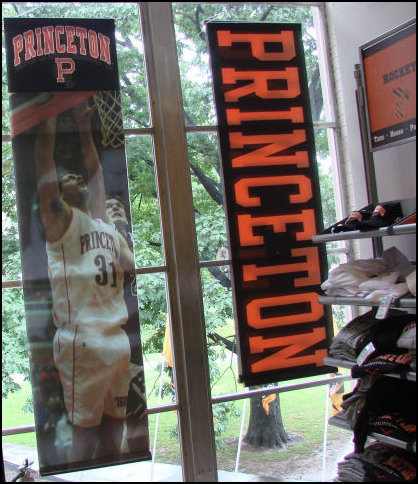 Stephanie gave us a great evening on the town. Stephanie  is showing off the Coach $600 handbags.  The kitchen and table are from the secret downstairs room of the Las Esquinas  restaurant.  Ellen got this picture with Johnny Rocks, owner of Caffe' Palermo.  The picture over Ellen's shoulder is Ryan Seacrest with Johnny.  Most likely it will be taken down to make room for Ellen's picture.

Our bus tour was for 48 consecutive hours with loops through Uptown, Downtown, Brooklyn, Liberty and Ellis Islands and a night time tour.   One thing we noticed was a few people! 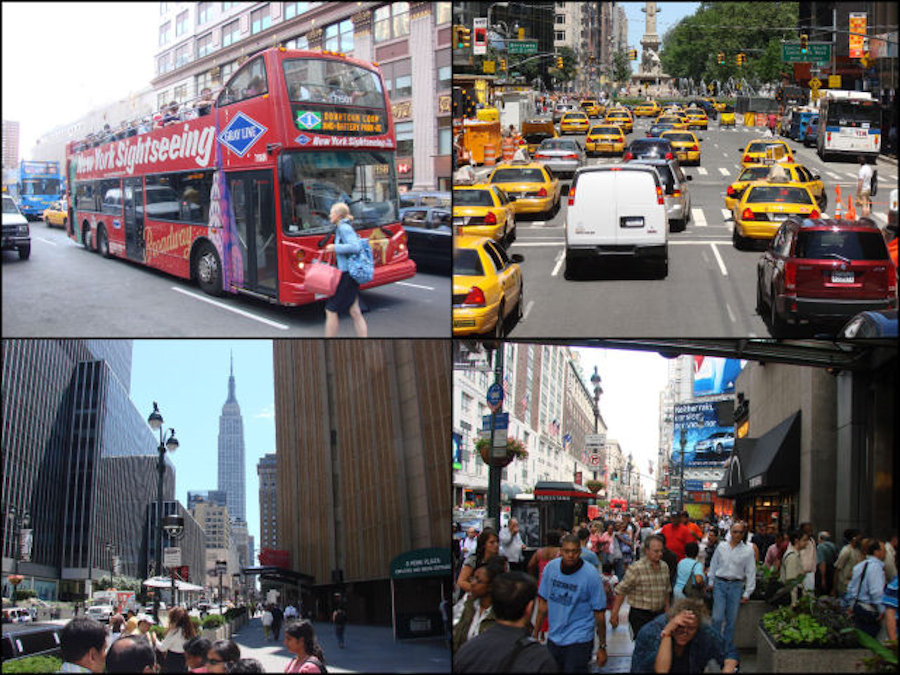 A variety of the buildings you will see. The bottom right photo is a mansion typical of those built a hundred years ago.  This one is a few blocks away from the former mansion of Jacqueline Kennedy Onasis.  Hers was recently resold for $30 million dollars. 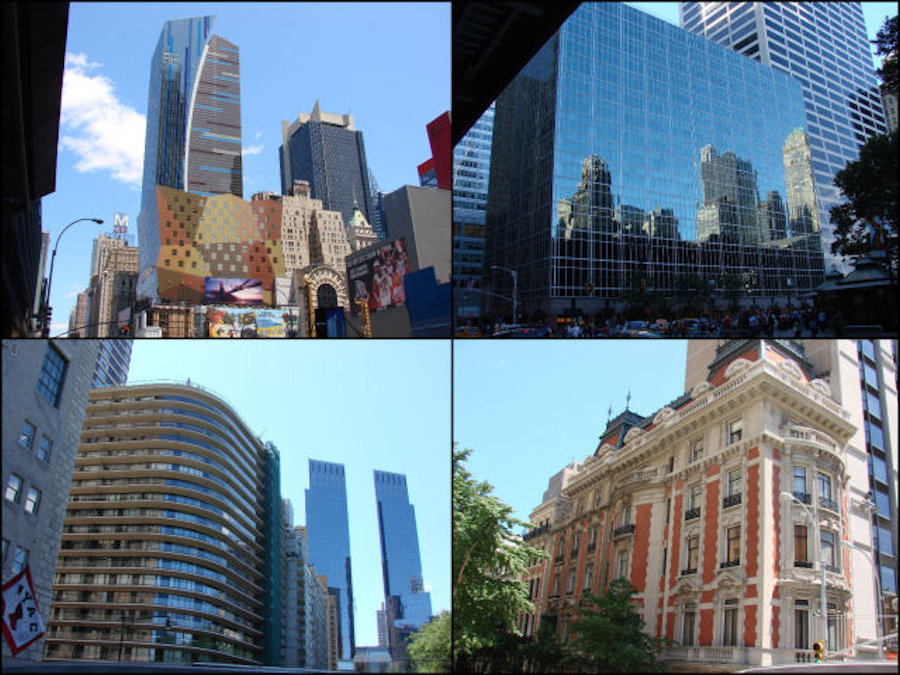 Ground Zero (now Ground .001 as rebuilding begins).  Brake dancing street performers.  The piano at FAO Schwarz used in the Tom Hank's movie BIG.  This one can be used in the store or you can buy your own for $250,000.00. 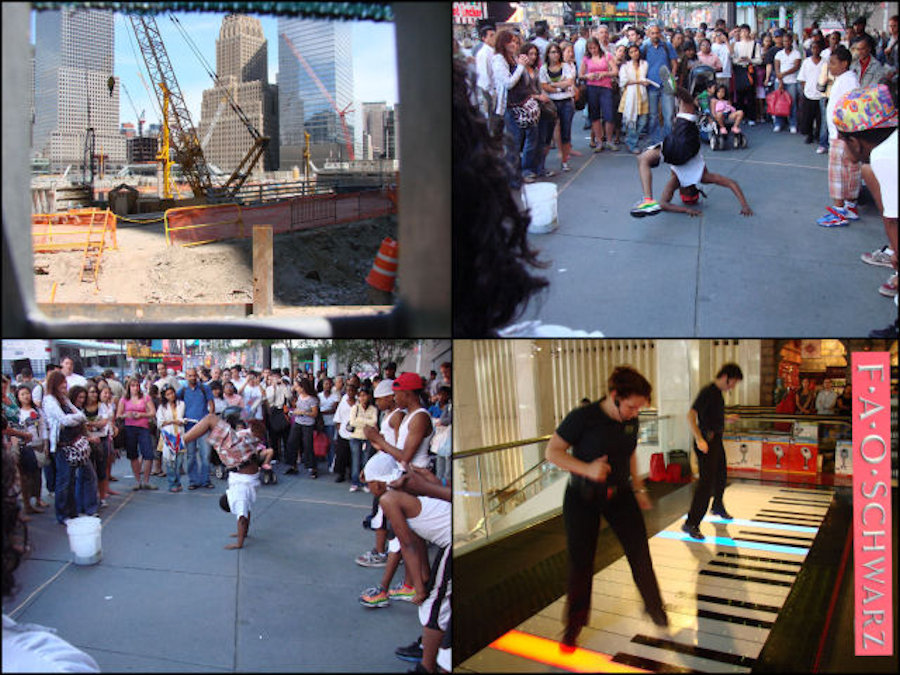 A must see, The Empire State Building. 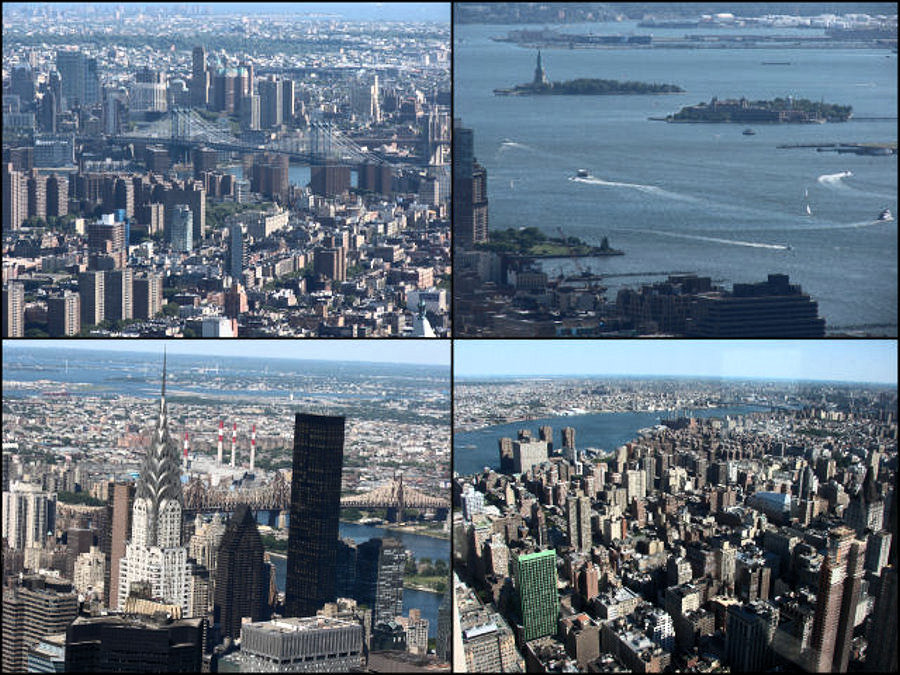 Our ferry to the islands.  The 151 foot Statue of Liberty given to us by the French in 1784 (when they still liked us!).  The view of downtown NYC from the island and classic sailboat. 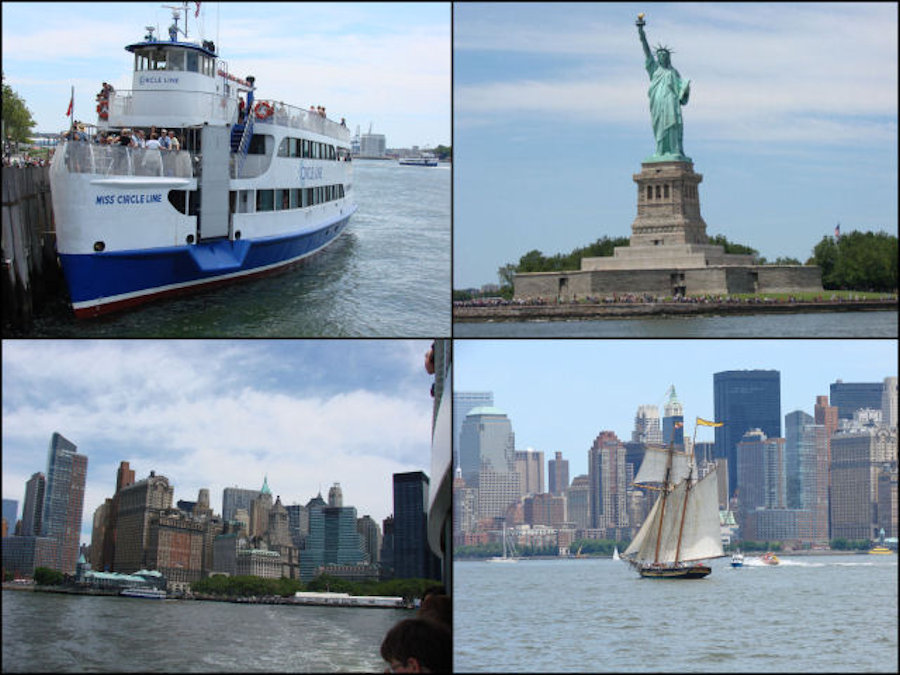 Central Park stretching 51 blocks between 59th and 110th streets, this 843 acre park has been here since 1859.  This is a place to get away from crowds.  Can you find Pete?  If you can, reply with a description of his clothing. 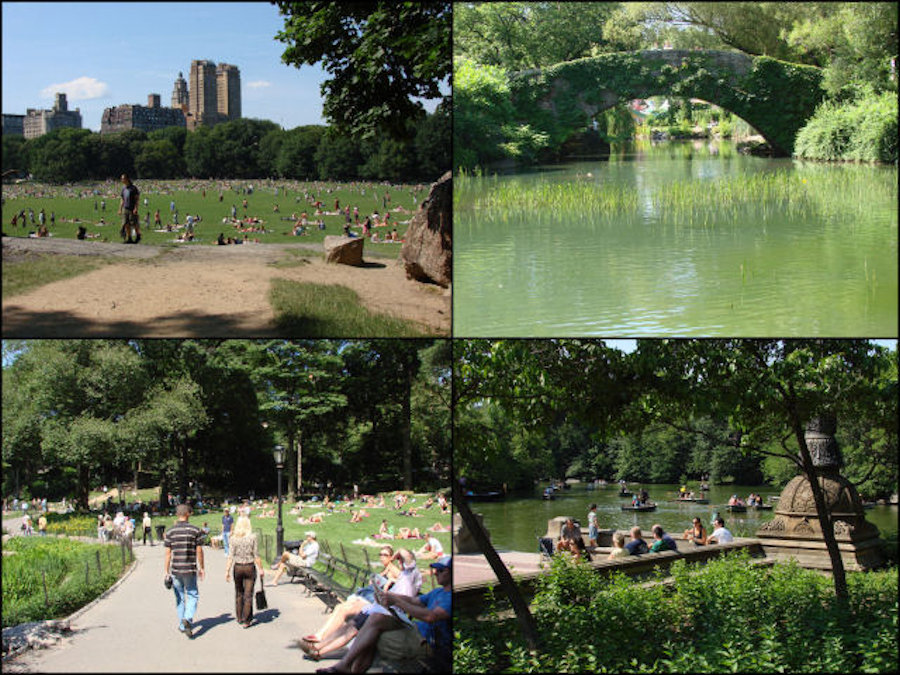 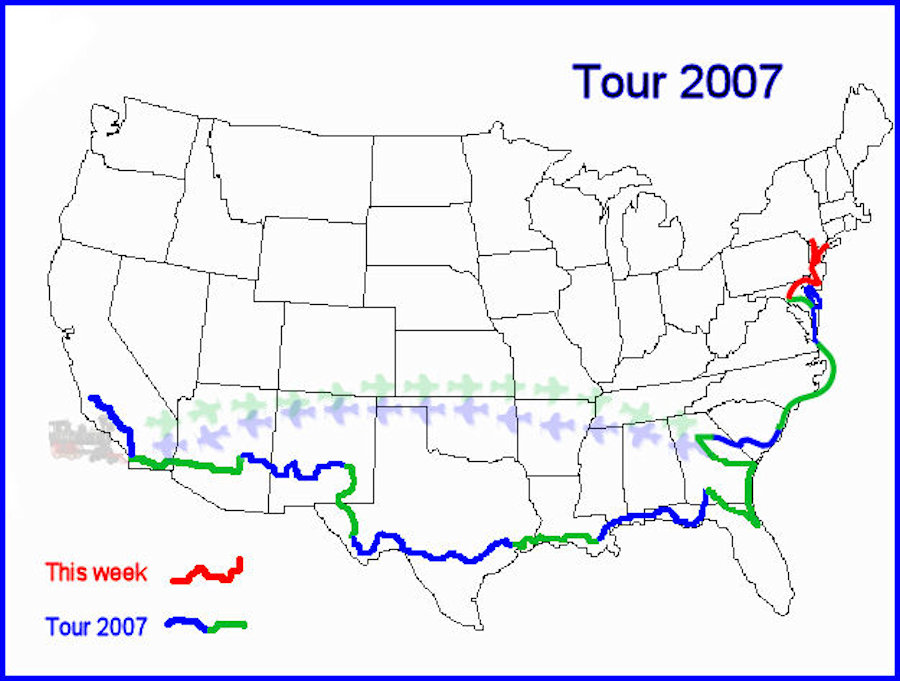 Next week we will continue up the New England coast: Connecticut, Rhode Island, Massachusetts and beyond?

PS: By the end of the third day of taking the scooter, NJ train, NY train, walking and the tour bus, we were exhausted.  We couldn't get the newsletter out until today. 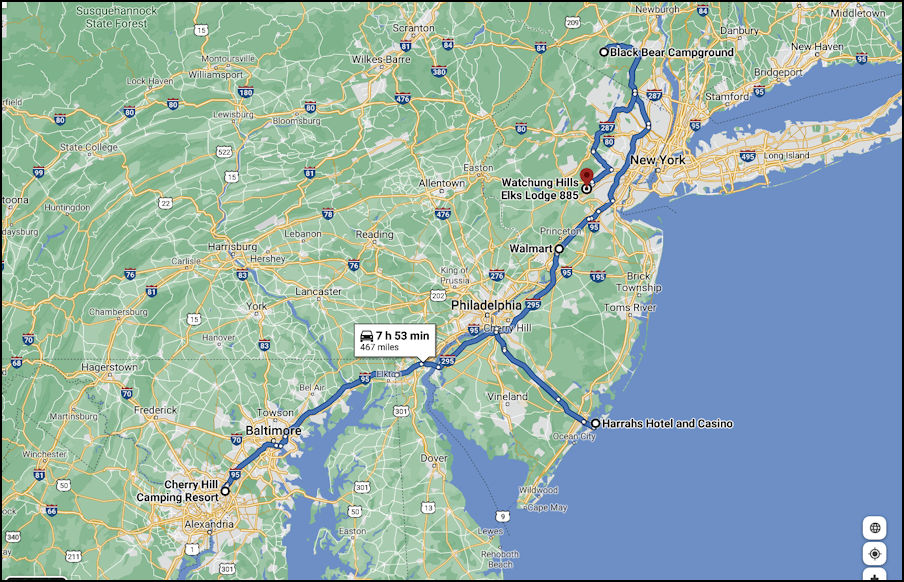