Royal Gorge, Then and Now


Circa September, 2008. We just left church in Pueblo, Colorado and were having lunch with our good RV friends, Lauren and Jeanette. (Hey L-J, where are you today, on wheels or keels?). L-J asked if we had ever been to Royal Gorge, Colorado. Heck no, we had never even heard of it. We were headed 320 miles to Amarillo, Texas to visit Aunt Glo. That was a two day trip for us.

But, you gotta see Royal Gorge, so we added a 114 miles detour and headed West instead of South. One of 101 great things about living in your RV full time, is having the "detour du jour". 1) From Pueblo you pass through Canon City just before reaching the gorge.

The Royal Gorge bridge was built in 1929 in six months for a cost of $350,000. It was created as a tourist attraction, surrounded on both ends by the visitor center, theatre, restaurant, aerial tram, SkyCoaster (ginormous swing), incline train down to the river, wildlife park, amusement rides for the kids and more. 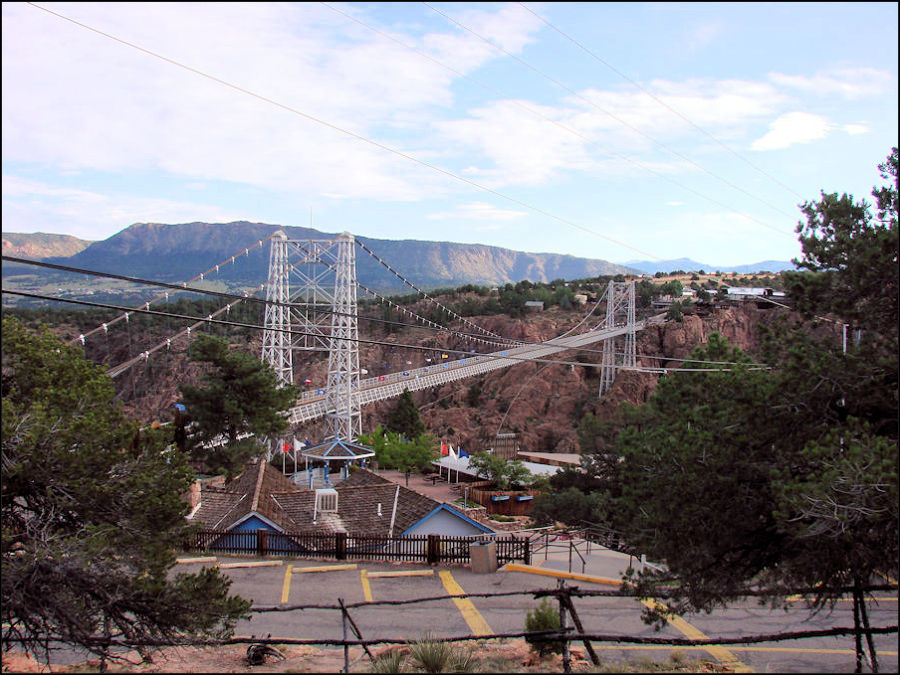 That was then. In June 2013 a wildfire swept through the Royal Gorge and devastated everything but the bridge and the "SkyCoaster". Here is a photo of the area after the fire was contained. The photo is from the award-winning travel blog of Colorado-based Claire Walter. 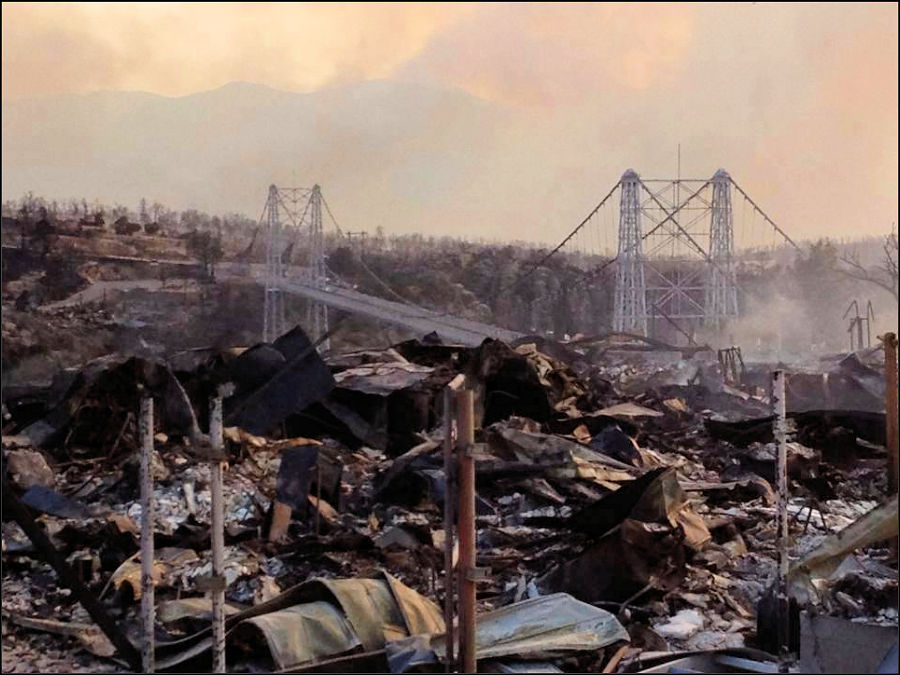 And now? Until we return for another visit, we can only report what we find on the web. The remainder of the photos here are from our September 1, 2008 visit.

At 955 feet above the Arkansas River, the Royal Gorge Bridge was the highest bridge in the world until 2001. The 1/4 mile long bridge is supported by two large cables anchored at either end. 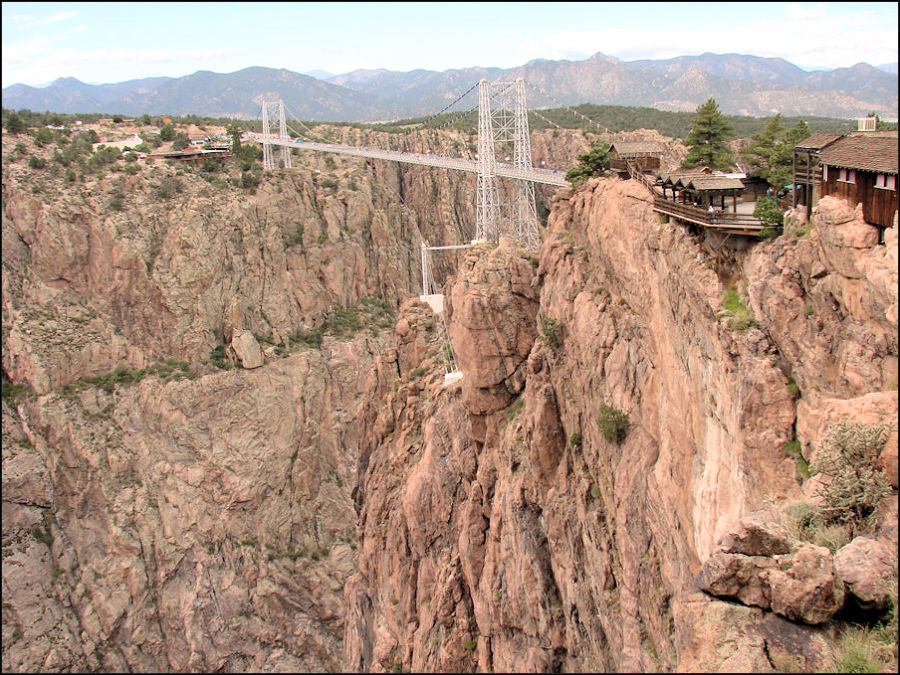 Automobiles can cross the bridge (but not 33,000 lb motorhomes) and return back to the North. The bridge would cut out 12 miles if connected to Hwy 50 on the southern end. 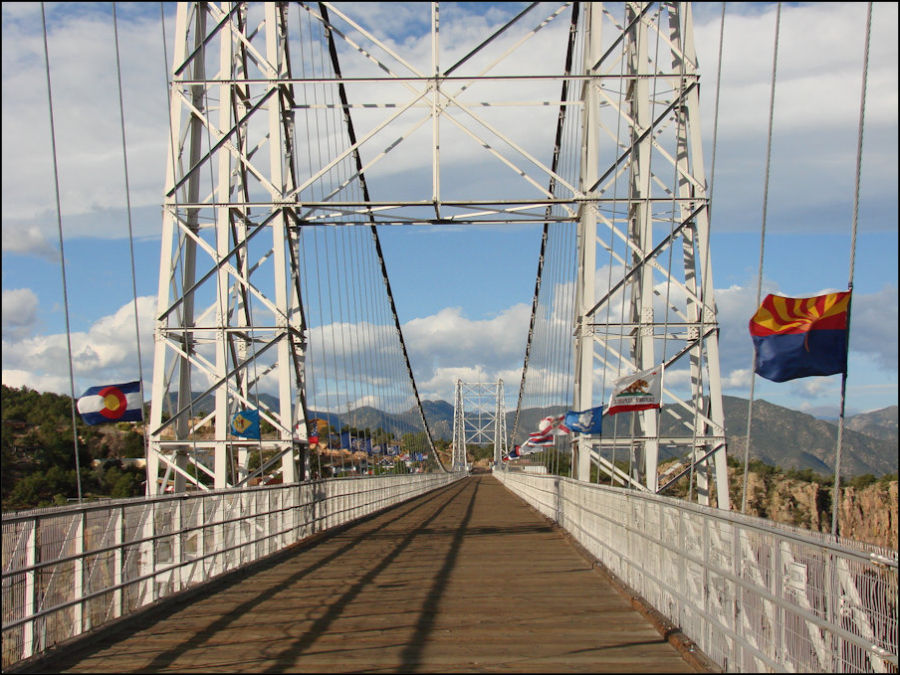 How in the world could this project have been built in 1929 with the tools of that day? 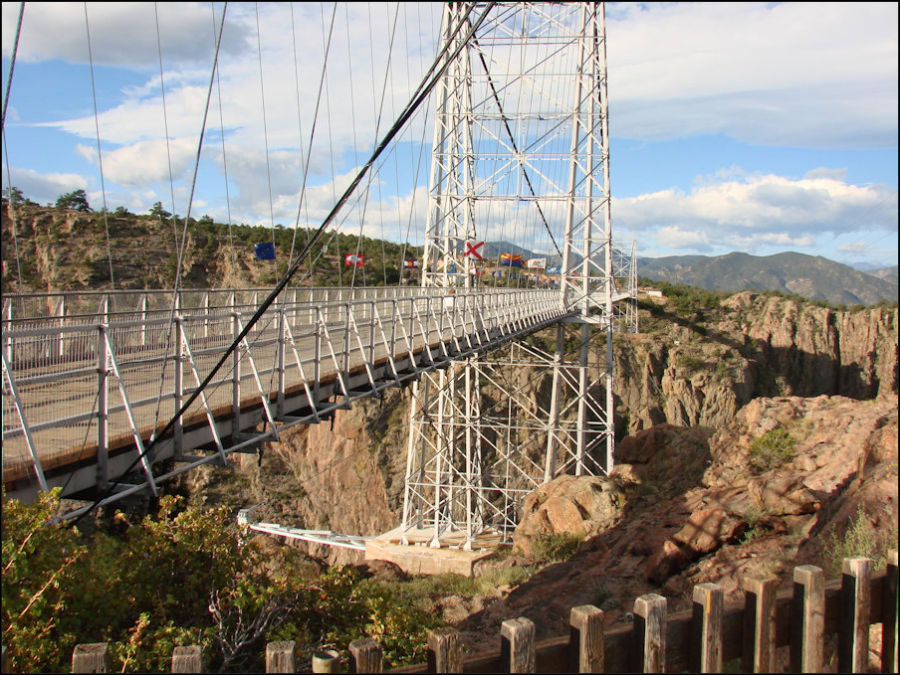 This is our version of Mystery Science Theater 3000, where viewers were forced by evil scientists to watch bad "B" movies. 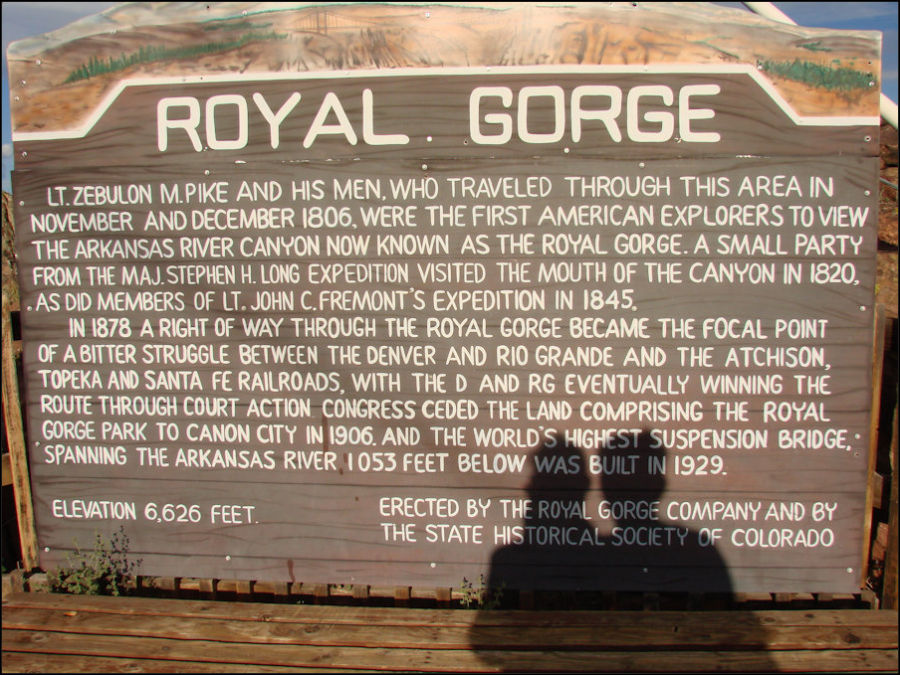 Fire Aftermath: 48 of the 52 buildings were destroyed. The bridge remained intact.
Today: The park was rebuilt by May 2015. As often is the case the rebuild was an improvement of the original design. We are not sure how many of the original structures remain at the same location.

Fire Aftermath: The animals were saved and permanently moved to a new location.
Today: The wildlife exhibit is no more.

These mammals look tame but watch out during happy hour!

Fire Aftermath: This animal was relocated on Sep 1, 2008.
Future: Will be returning for a short visit.

The large cables supporting the bridge are actually 2,100 strands of Number 9 galvanized wire (what looks like a heavy weight coat hanger).  The original "cables" were anchored a one spot as shown in photo No. 4.  The original single anchors were replaced by 18 anchors holding about 116 cables each.  It required 8,400 wire splices to cut and re-anchor the cables.

Fire Aftermath and Today: About 100 of the wooden bridge planks were burnt, but none of the metal parts were compromised.

This is the view from the base of the Sky Coaster. The sky-coaster is a 100 foot tall, free fall tower, that swings you through the sky, 1200 feet above the Arkansas River. The skycoaster, for those crazy enough to ride it, is an additional $27. 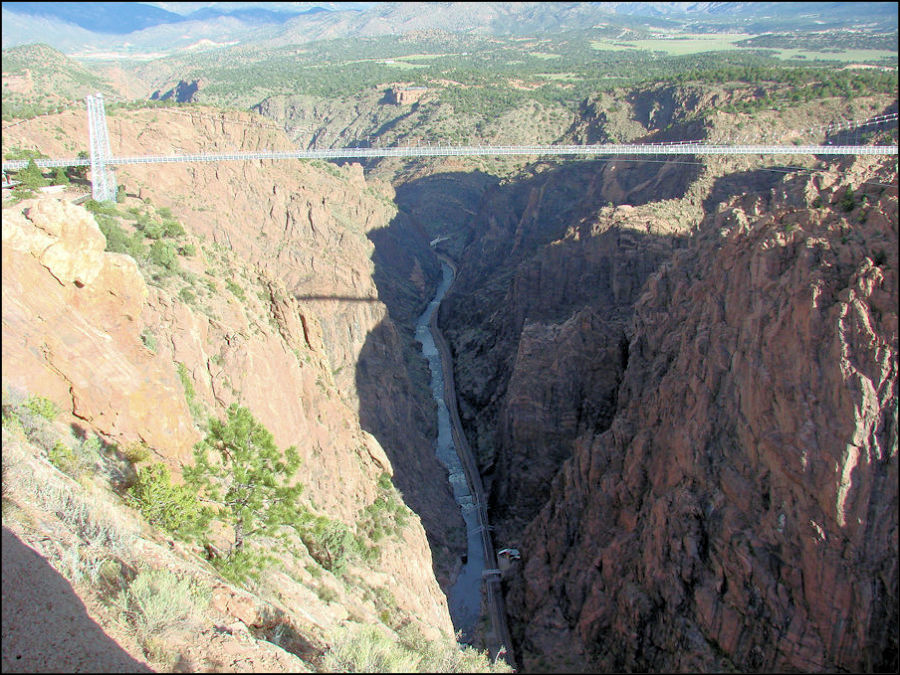 Fire Aftermath and Today: The Sky Coaster was not damaged and remains in use today. Price in 2017 is $30.00.

Visitors hike down a short way to board the incline train which takes you down to the Arkansas River. 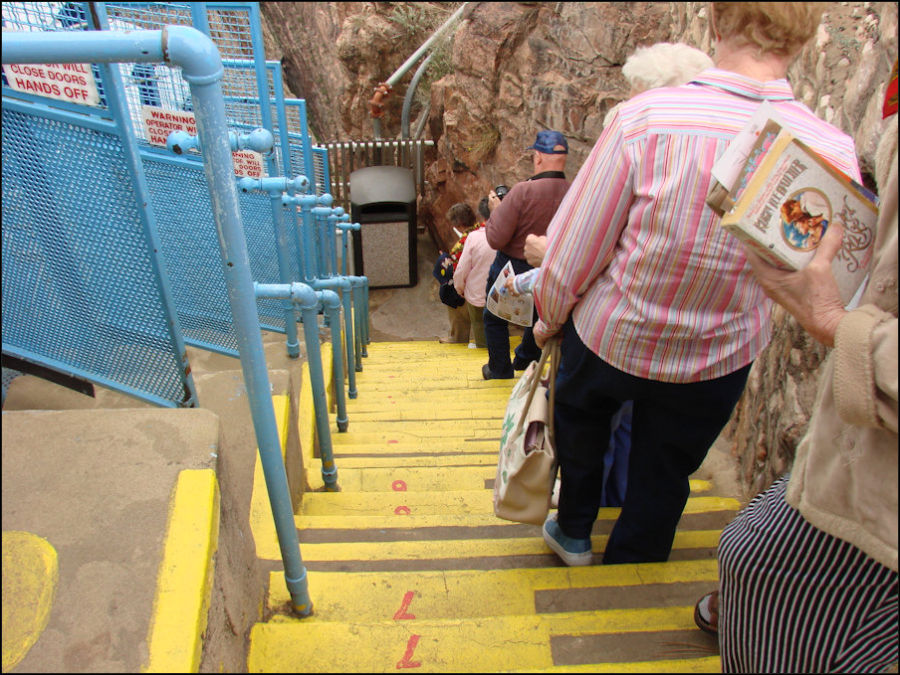 Fire Aftermath and Today: The incline train had major damage and is not operational as of Aug 2017. Hopefully it will reopen soon. It was a high point of our visit with the great photos from the river's edge.

A car full of folks on the way down. 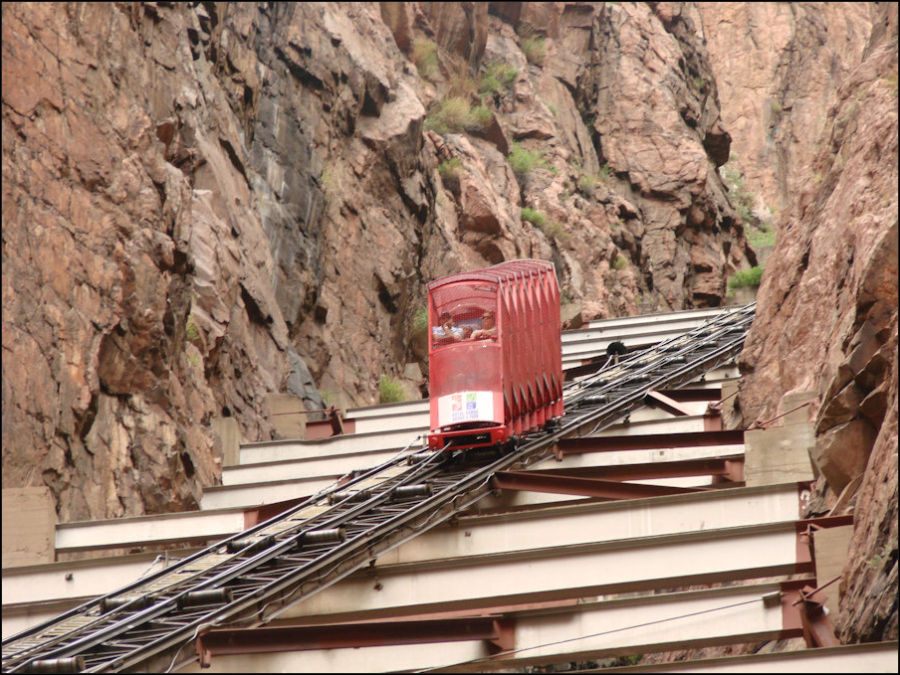 The view from the front seat. 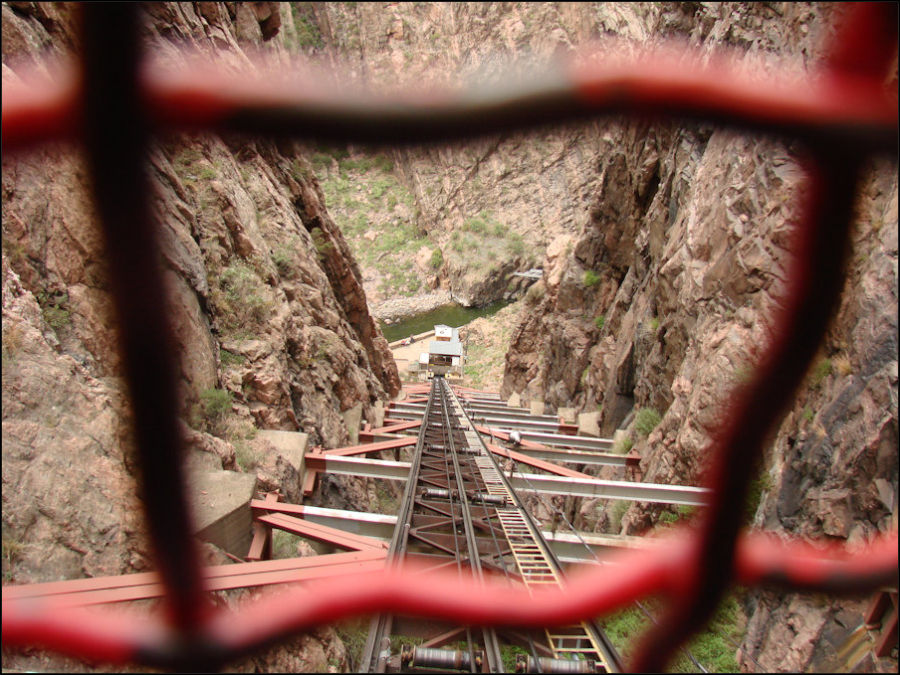 When almost down, we saw the Royal Gorge train roll by. 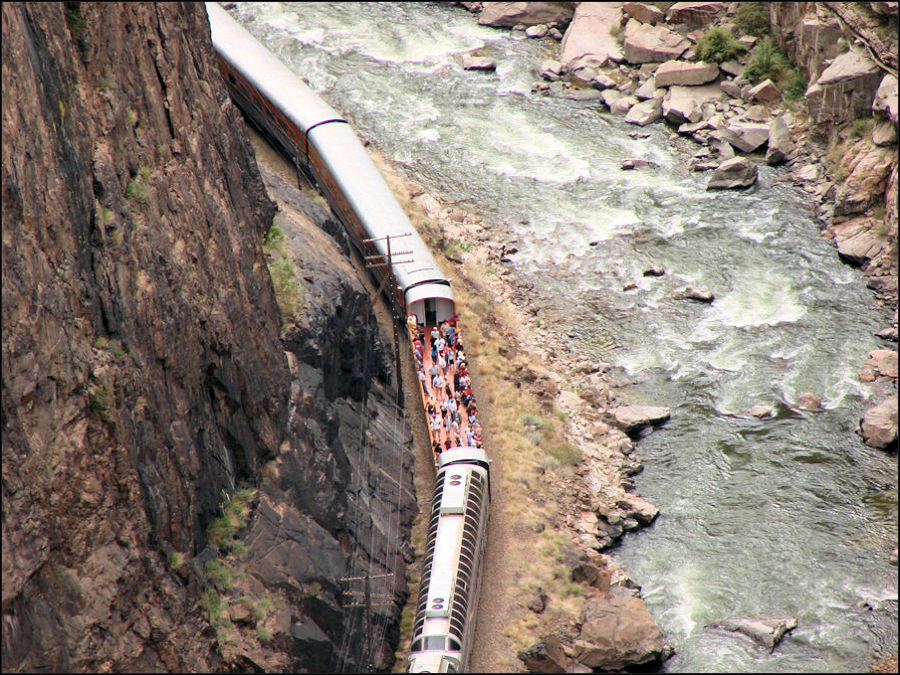 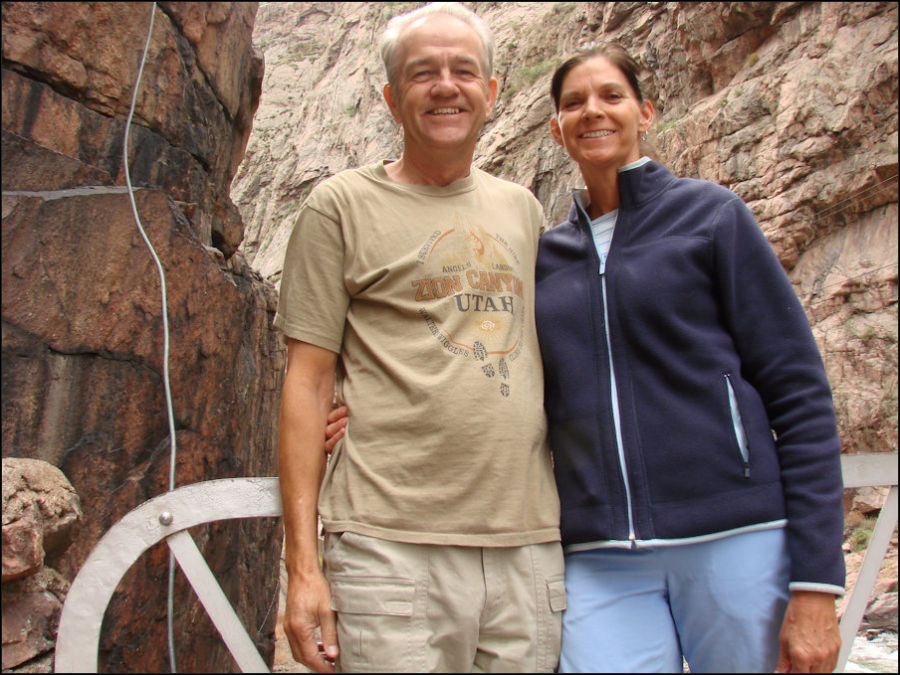 Happy rafters on the Arkansas River. 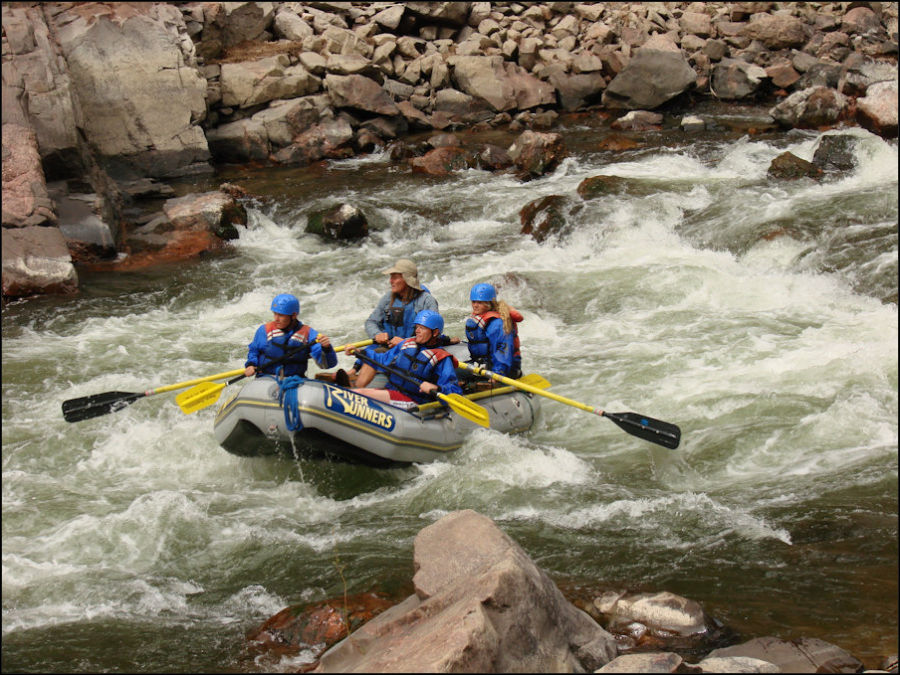 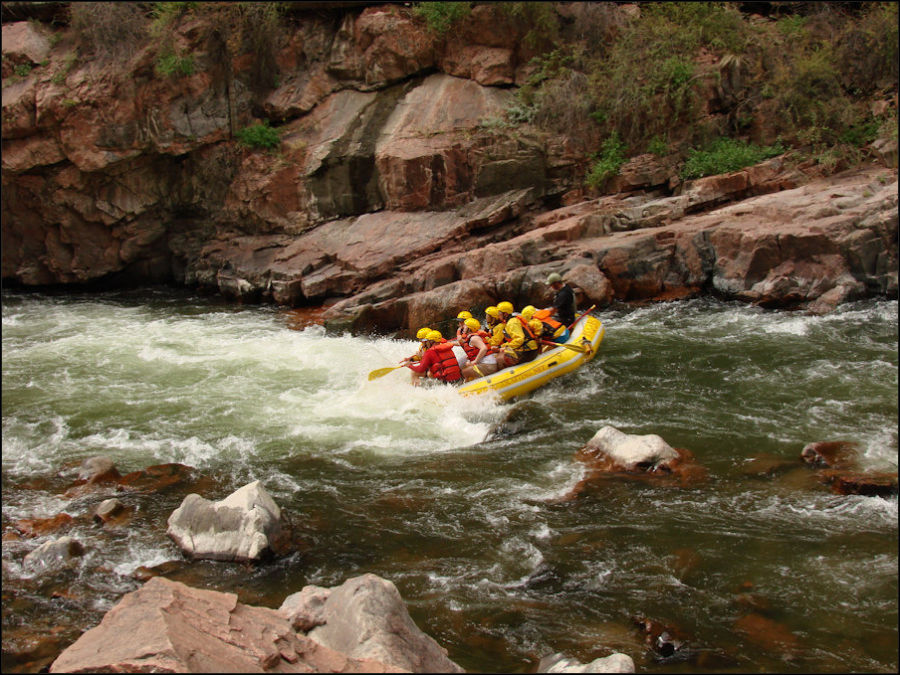 The Royal Gorge Bridge looks pretty small from 955 feet below.

The restaurant, gift shop and the Plaza Theatre in the background. 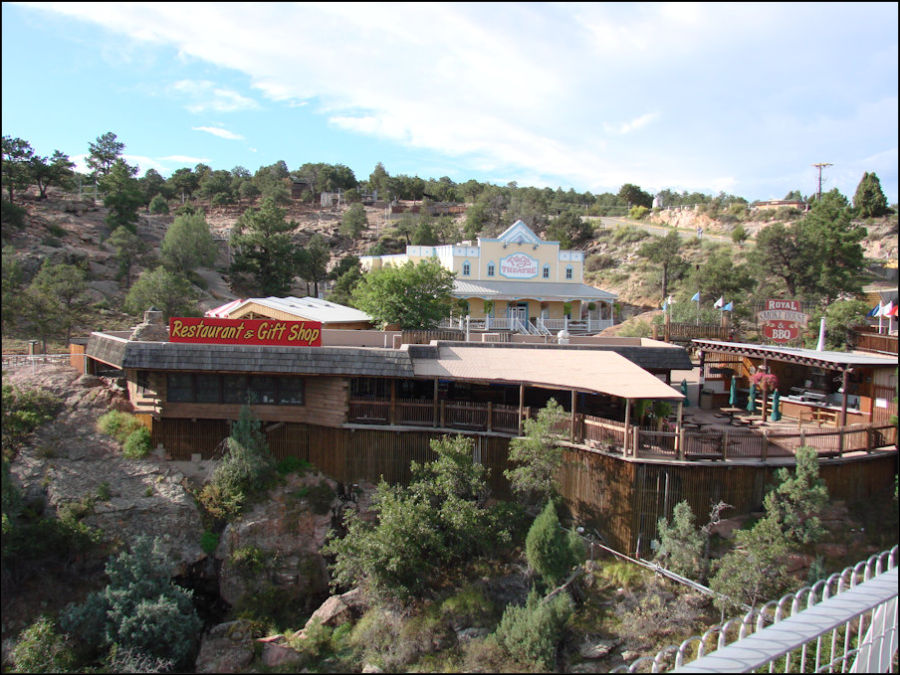 Fire Aftermath: It appears that the Plaza Theatre survived the fire but the buildings in the front did not.
Today: A new visitor center and other buildings have been replaced.

The aerial tram which was included in the admission fee. 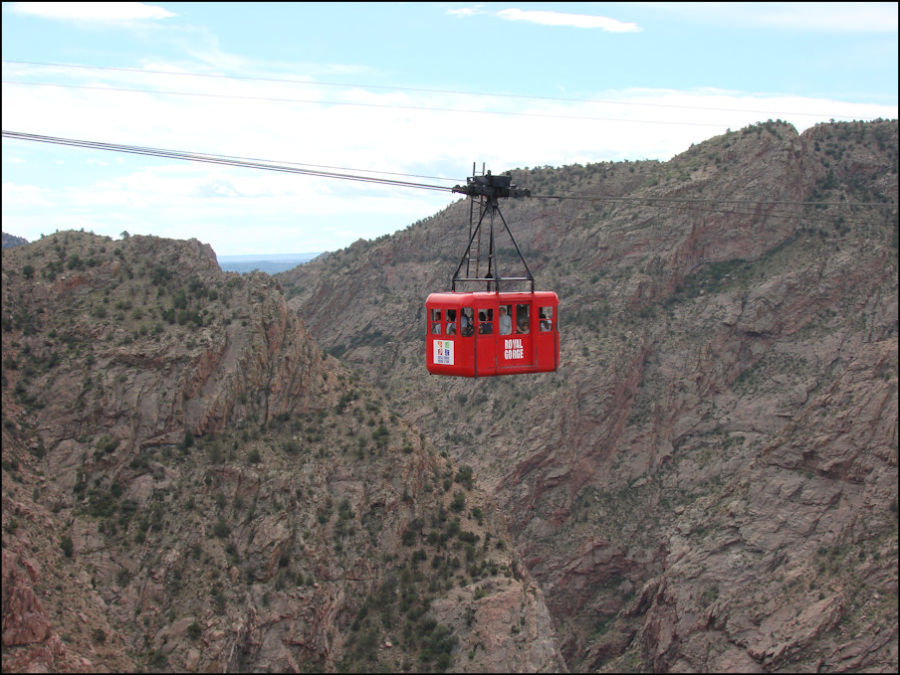 Fire Aftermath: The aerial tram cars burnt and the cable snapped and fell into the river.
Today: The cable was removed from the river within 10 days and soon the train and rafting were restored. The trams were replaced by gondolas and is operational.

The CloudScraper Zip Line is operational and is the highest zip line in North America. It is 1200 feet above the Arkansas River and you travel 2400 feet across the gorge. Whee!