"On the Road Again". We had great fun building decks and visiting family, and are now on the move. 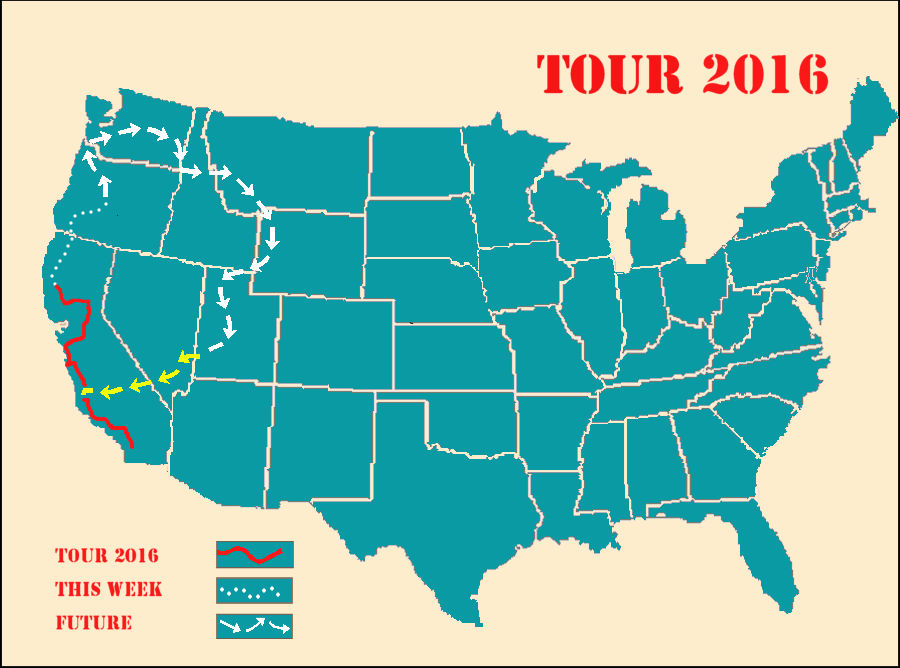 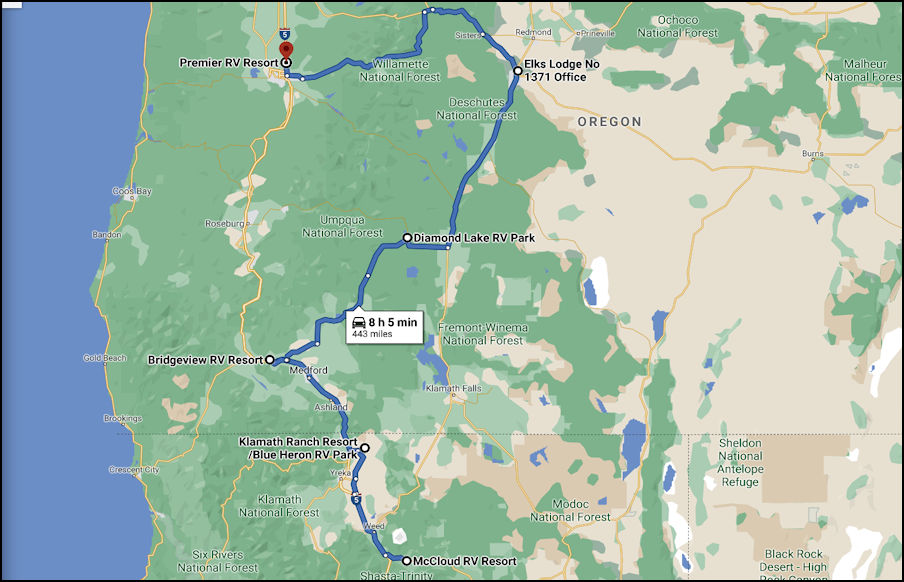 1) The first leg of our road trip was just 68 miles north of Redding. We caravaned with Emily and Chad and family. Micah rode with us in the MotherShip and obviously thought it was great to be with Grandpa and Grandma. Zeb would have been with us too, but it was nap time for him. 2) Shasta Lake is California's largest reservoir; it was wonderful to see it full as it was soooo empty last summer.

We chose to go to McCloud RV Resort as it is one of the few parks that has RV and tent camping. This is a wonderful park with grass everywhere. They allow only 10 tent sites but you get to pick your own spot. We were able to be just across the road from Em and Chad. 1) Emily enjoys a little alone time as Chad feeds the baby bird Coralyn.

1) Coralyn signing "Whoa" when she learned we were on the way to the McCloud River waterfalls. 2) Ellen hiking the trail to the Upper McCloud Waterfalls.

There is no easy path to get close to the Upper Falls. Zeb admiringly looks on as "she's the baby, gotta love her".

The Middle Falls are the most spectacular with dozens of people sun bathing and swimming on this day. It takes a good hike to get to this area. 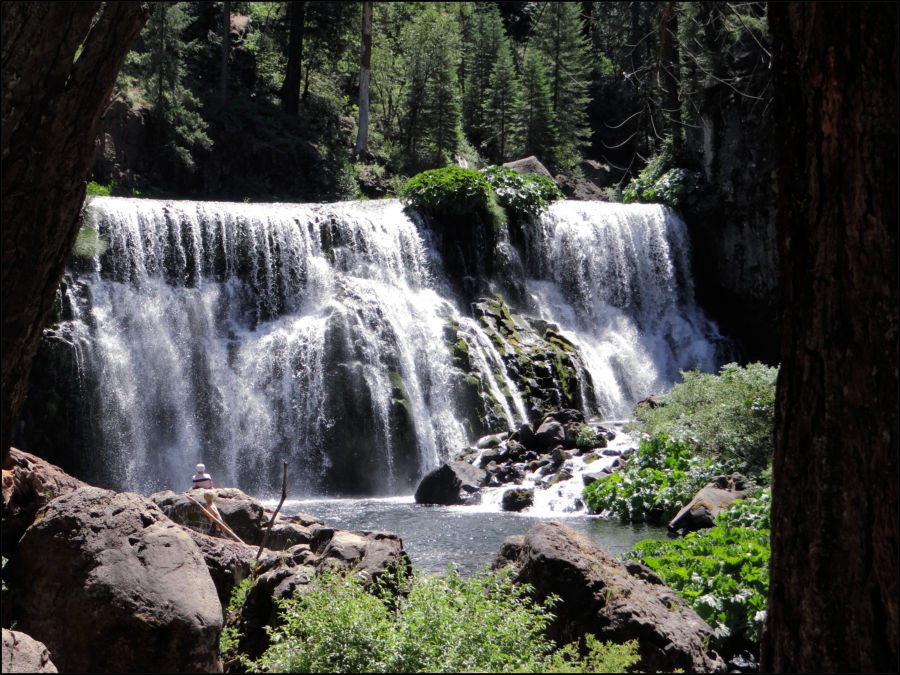 The Lower Falls are just a few hundred feet from the parking area. As such they have the most visitors. The kids played in the water above the falls. Below the falls is a large pool for swimming and for jumping from the cliffs.

Two men jumped off the cliffs together as Coralyn reacts with her "I'm not impressed" face.

1) Back at the camp Zeb studies the man dumping his tanks. 2) Based on Grandpa's previous interaction with Zeb, Zeb is most likely telling this man "That's not the right way to do that!"

Emily enjoys her lunch as Chad knocks the Pickleball around with Pete.

After a wonderful three days of camping, Emily and family headed back to home. Pete & Ellen stopped at Burger Express in Mt. Shasta city for lunch.

After finishing our burgers, we completed the rest of a long day of 63 miles to get to Blue Heron RV Park. This is a lovely park away from everything with huge concrete pads and patios. Most sites are right on the Klamath River and blue herons are plentiful.

It was a great place for Pete to work on revamping the water bay. He didn't notice the large guests who roam the park. 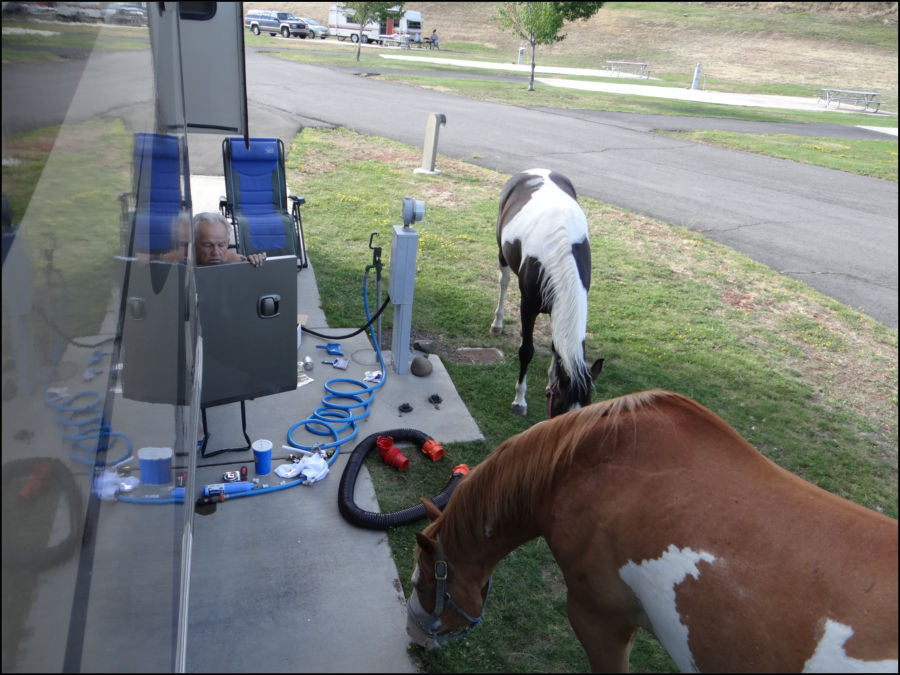 Mandy however did notice and was wondering "what the heck are these things?". After an hour of barking she finally cozied up and made a friend.

1) Pete's office view of the Klamath River at Blue Heron. 2) Next we made it another 63 miles to get to BridgeView RV Resort in Grants Pass, Oregon. We did call for reservations and got the last site. It is one of six sites right on the Rogue River. This is a small, but very nice RV park. All the sites are nice but the river side site was exceptional.

Our next stop would be Bend, Oregon just 184 miles from Grants Pass. For most travelers 184 miles is nothing! But, we prefer a shorter day. So we got a site at Diamond Lake RV Park near Crater Lake. On the way along highway 62 is the Rogue River Natural Bridge. Many have told us about this area where the river disappears into a lava-created tunnel and reappears 200 feet down stream. The white river in the right photo is where the water exits the tunnel. Honestly, we weren't impressed. It would be very cool if the whole river disappeared. The water splits with the majority underground but still there is an above ground flow as well. If you did not have the signage, you might not even notice the "hidden river".

What was really worthwhile were these rapids just a few feet from the parking lot. 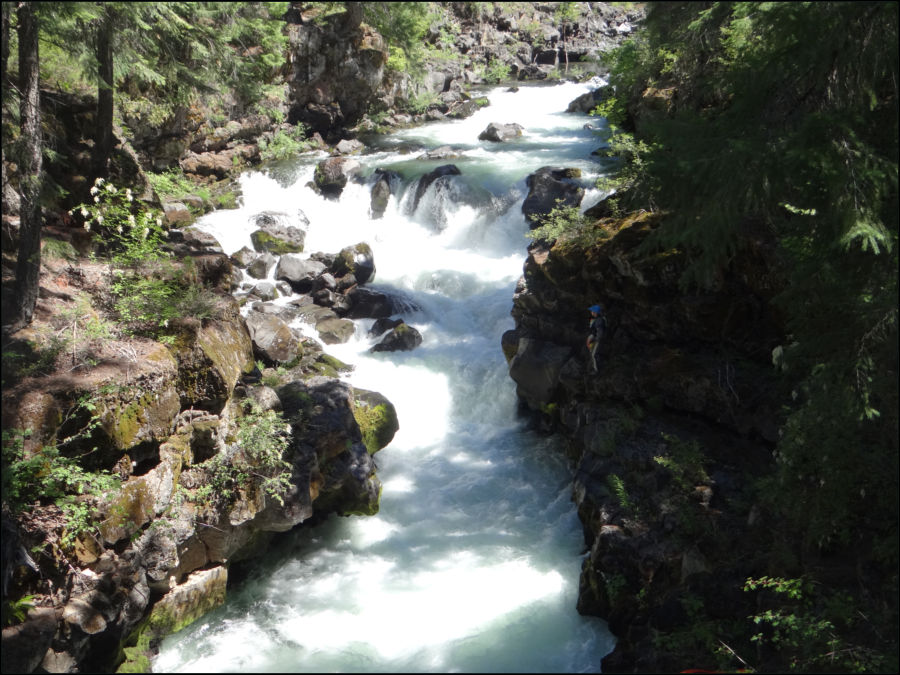 On this day, three kayakers were making their way down the river. 1) This spotter is waiting for his buddies to come down the rapids. Both of his friends came thru unscathed even while they both got flipped upside down!

You can see a 52 second video of these two kayakers going thru the rapids.

Ellen's knee worked well enough for her to beat Pete back to the MotherShip. She appears to be a model presenting the 2006 Monaco Diplomat. 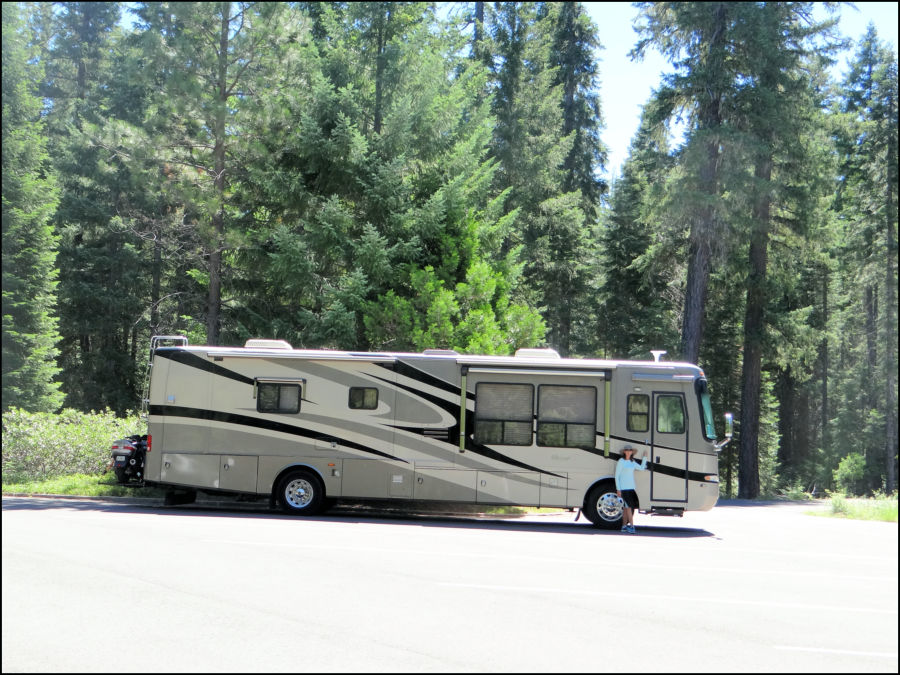 The Natural Bridge was about halfway to Diamond Lake. 1) Mt. Thielson, near the lake, looks like a very sharpened pencil. 2) The ScooterShip poses on the rim road around Crater Lake.

The total rim road is about 32 miles and a great ride on the scooter. But you will only see the lake intermittently for the first 12 miles. The rest is a drive through the woods. We went about six miles and returned to get these photos.

Crater Lake is simply an awesome creation of God. To see our photos of the lake in the snow link to Crater Lake July 2011. 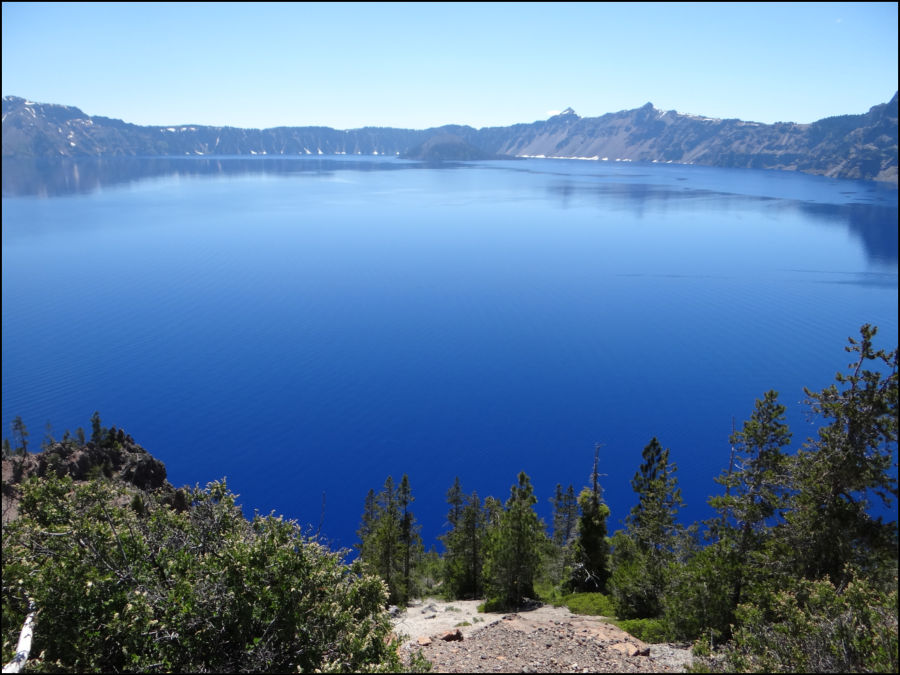 Even with reservations, we could only get one day at Diamond Lake RV Park. So, we finished the trip to Bend, Oregon. The Elks Lodge in Bend does NOT take reservations. We have been lucky in getting RV spots across the nation. We got the last spot big enough for the MotherShip. We'll stay a week and play Pickleball before heading to Coburg, Oregon for a Monaco RV Service appointment. Bend has seven locations to play Pickleball. Below is Pine Nursery Park with 16 courts; fun!

We'll be reporting back from Eugene and northern Oregon cities next week.