Okay, we're home and we could skip a travelogue as "What's new here?".  But, we have to tell you that after traveling to 50 states and five provinces, our home area is amazing.  We have yet to find another area that we could comfortably live in the MotherShip all year long.  It gets cold here, but not too cold. And it gets hot, but nothing we can't handle.  So to all our fellow RV readers, if you haven't been to California's Central Coast, you should come.  We are staying in Nipomo, CA, just 10 miles north of Santa Maria where Pete's was raised. This week we highlight the Five Cities Area: Pismo Beach, Arroyo Grande, Grover Beach, Oceano and Shell Beach. And we tossed in a few photos from our host community of Nipomo. 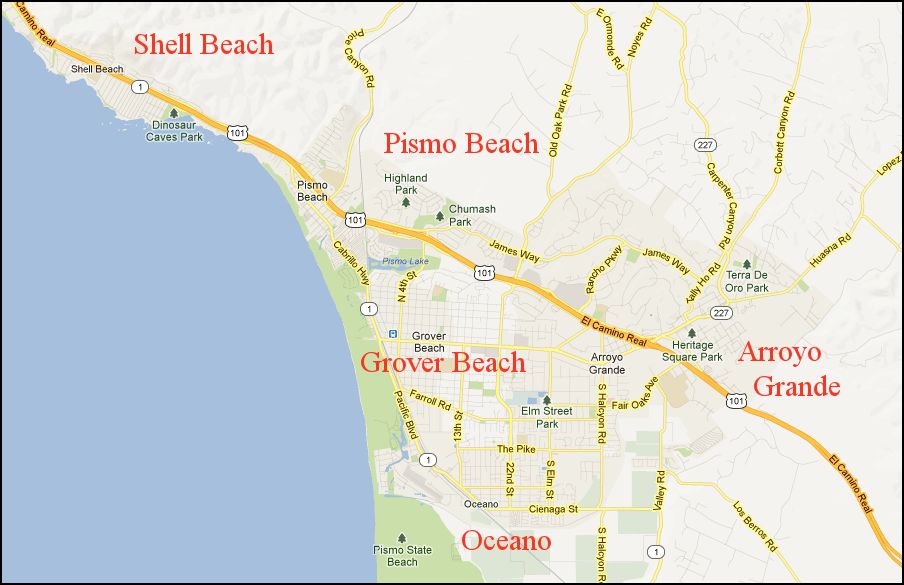 Pismo Beach, with a population 7,655 (2010) is the most well known of the five cities. It has a nicely maintained downtown area with lots of shops and restaurants.

Pismo is famous for its clams. In the 1950's Pismo was known as the Clam Capital of the World.  The clams were very large and there is  an 8 inch clam on display at the Pismo Beach Chamber of Commerce.  Back in the plentiful days thousands of large clams could be seen poking out of the sand at low tide.  Today, you can still clam legally but chances of getting one is very slim.  The beach today is a big playground for beach lovers and the pier is great.

For our RV friends, there are a number of campgrounds. We have not stayed in Pismo yet. Two campgrounds are on the beach side of Hwy 1.  This is Pismo State Beach NORTH BEACH CAMPGROUND.  On this day (Friday) it was almost empty. The sites are grassy and looked to be of good size.

1) Right next door is Pismo Coast Village RV Resort. This park was nearly full compared to the state campground, probably due to the facilities available. The sites are fairly close together but it is obviously a top choice for most RVers. 2) Just south of the Pismo State campground is the Butterfly Grove.  The Monarch butterflies are so numerous and congested that they can make the green trees look orange.  Last March the butterfly count was estimated to be 10,000.

Up on the hills east of the 101 freeway are lots of houses. Some are older and quite shabby, while many others are new, huge and no doubt, worth millions of dollars.  But, no matter where you live (or park your scooter), you won't get a better view of the Five Cities area.  The beach below is 12 miles in length, going from the north end of Pismo Beach  to Mussel Rock in the south, seen in the distance.  When Pete was in junior high and high school, he and his siblings used to ride their dune buggies on the beach and in the Oceano dunes.  This was the best playground anyone could ever want.  There was over 24 square miles of dunes to explore. 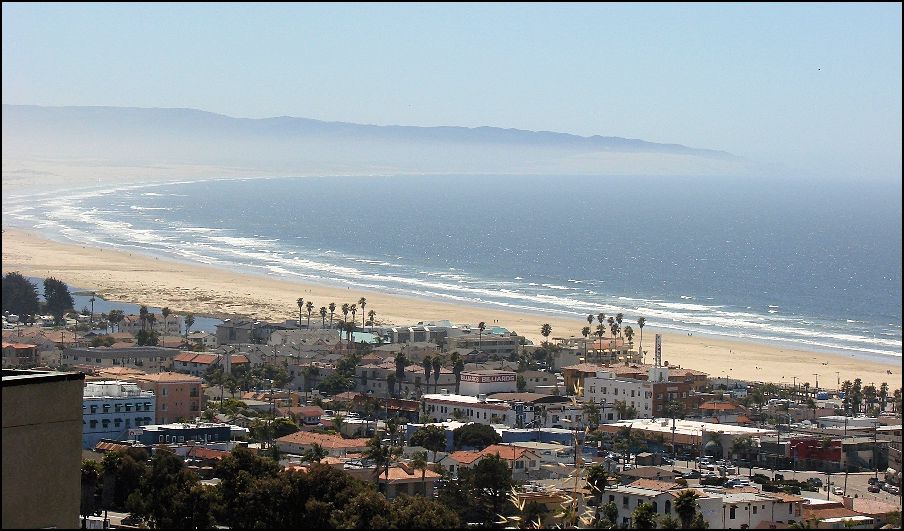 Leaving Pismo and heading north on Hwy 1, you come to the community of Shell Beach. The commerce in the town is mainly right on the highway. The homes stretch from the stores to the cliffs above the beach.

A new area of very plush homes is next to Dinosaur Caves Park on the left.  Eldwayen Ocean Park on Ocean Blvd is a nice quiet neighborhood park on the cliffs overlooking the Pacific Ocean.

Speaking of cliffs, if you don't bring your RV, why not stay at one of the many upscale hotels right on the cliffs.  Here is The Cliffs, where Pete and Ellen spent their 20th wedding anniversary.  We have always enjoyed traveling short distances for our anniversaries, so we have stayed at many of the hotels in Shell Beach, Pismo Beach and other nearby Central Coast areas.  For our 20th anniversary Pete booked the enormous top floor Presidential Suite at the Cliffs. Since it was $200.00 a night, we booked a smaller, less expensive room for the first night.  When Pete went to secretly move belongings from the small room to the suite to surprise Ellen, he was told it was not available as the guests stayed an extra night.  While this was extremely frustrating and we left, the hotel manager did invite us back for a free suite later in the week. 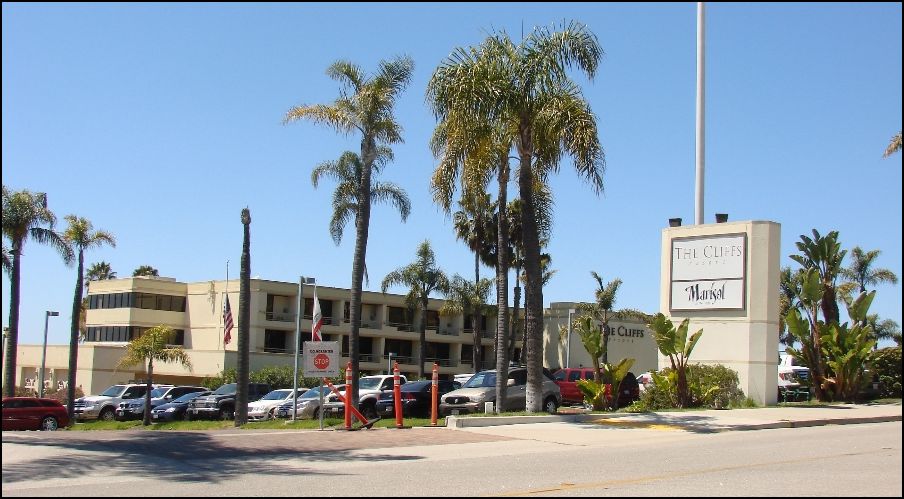 Grover Beach (population is 17,156 in 2010). ) used to be called Grover City. But since it was on the beach, they spent hundreds of thousands of dollars changing the name to attract tourists.  Did it work? We don't know. The street shown below is the only access to the beach and there are only commercial warehouses between the railroad tracks and the ocean, no hotels.  You can access the beach from this road, Grand Avenue.

Just a tad to the south is Oceano (population 7,286 in 2010).  This is one of the two parking areas where Pete used to access the beach and more importantly the sand dunes.

1) Pay a small fee and you too can get your two-wheel drive truck stuck in the sand.  While we watched this vehicle it went from tires on the sand to frame on the ground.  The lone driver did not know how to rock the vehicle forward and back. So it just went straight down.  The nice thing is that no doubt others will come along and push him out; that is typically of the camaraderie of the beach drivers.  2) While Oceano does not boast a very robust downtown area, they do have the Great American Melodrama.  We have not been there for 20 years but it was great every time we attended.

The "Village" of Arroyo Grande (population 17,252 in 2010) has a highly restored three-block section of cute shops, restaurants and offices.

The last time we visited Arroyo Grande, Doc Burnstein's Ice Cream shop was occupied by Bernardo's Ice Cream.  We don't know if it is the same ice cream.  What we do know is that every Sunday after attending the Arroyo Grande Calvary Chapel, we stopped at Bernardo's and our whole family loved the treats.

Before heading back to Nipomo, we drove down to Oso Flaco Lake. This was the parking area that Pete used the most to launch into the dunes with his sand buggy.  Good news, according to the sign, it is still a State Vehicular Recreation Area. Bad news is the sign at the kiosk says "Not Permitted, Vehicles Off Road".  Not quite sure this makes sense.  There are no roads at Oso Flaco, just sand dunes and a walking path. Now where's that State Vehicular Recreation Area?

1) Back on the Nipomo Mesa, from the peak, you can see Oso Flaco in the distance.  2) When we asked our host Judy "if our 44-foot Mothership would fit in her driveway?" she said "Sure, you bet!".

1) On the east side of Nipomo are farms and foothills. While we are sure there has been development, the beautiful foothills look about the same as when Pete first moved to Santa Maria in 1959.  2) And finally, when you get to Nipomo, don't pass up a chance to "Come In and Monkey Around" at Jocko's restaurant on the corner of Thompson Road and Tefft in Nipomo.  Food was great in 1960 when the floors where covered the peanut shells and you sat on small oak barrels. So why should it be any different 53 years later!

We hope you enjoyed our little local tour. We learned at lot. And who knows, maybe even our friends and family on the Central Coast learned something?

This special edition travelogue was brought to you as there is nothing new in our travel. 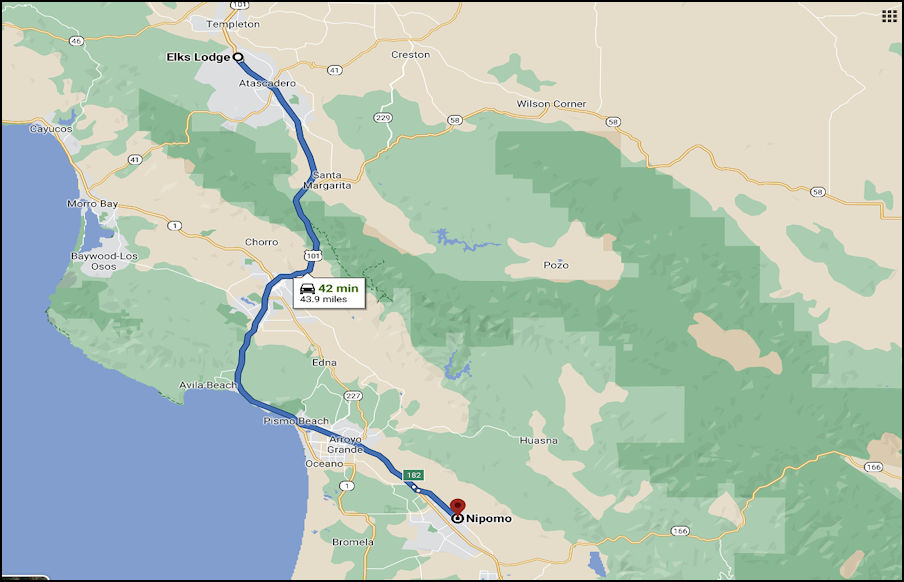