We have had the blessing of being able to travel to 50 states and five Canadian provinces. Along the way there have been dozens of community events we have be able to attend: 4th of July parade in Wasilla, Alaska (home of Sarah Palin); Pueblo CO Chile and Frijoles Festival;  Renaissance Festival in Apache Junction, Arizona; Car Rally in Tuscon, Arizona, Cost of Freedom (tribute to veterans) Exhibit in Lake Havasu, Arizona to name a few. Car shows are a favorite in hundreds of cities and Paso Robles, California is no exception. 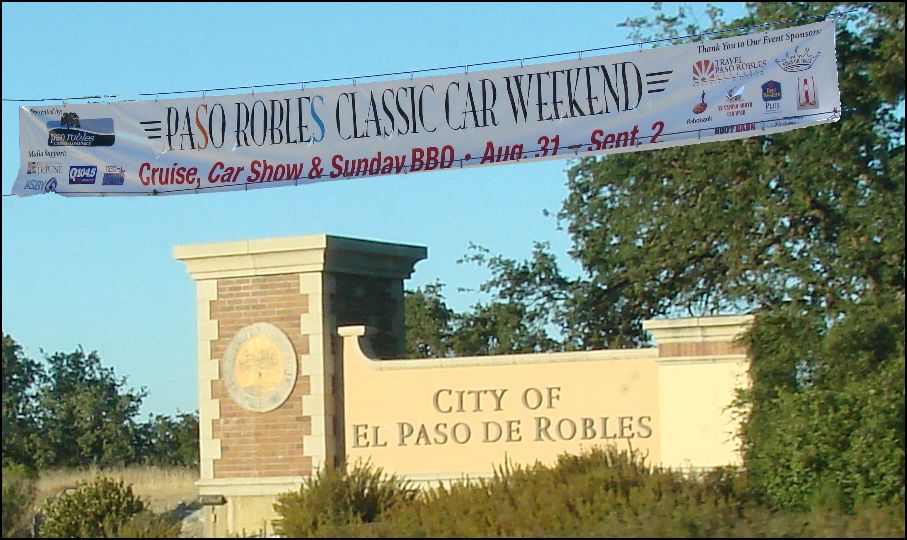 This three-day event consisted of the Friday Night Cruise, the Saturday car exhibit and awards and a Sunday BBQ and live music at a local winery. 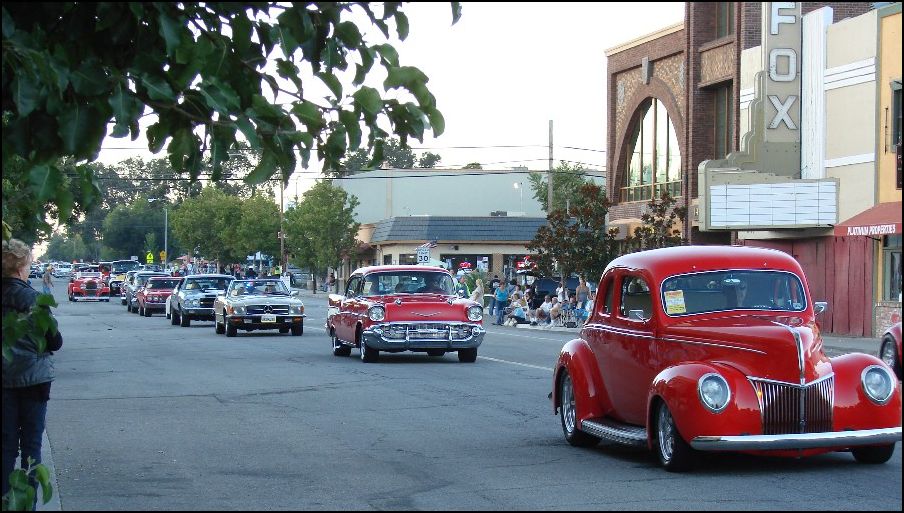 Any event is more fun when you know someone involved.  Two of the entrants were our neighbors at the Atascadero Elks. 1) Bill Edgington and his wife Willie are spending a few months traveling to car shows. Bill's car is a highly customized 1949 Mercury. Bill and Willie travel in their Country Coach Intrigue motorhome. 2) Syl and Shirley Szucsko travel in their MCI bus conversion and show off their 1934 Dodge DR Deluxe Business Coupe. Both cars are immaculate. Those that restore or modify these classic cars will spend from ten's of thousands to over $100,000 dollars in the process.  Bill said that while the exact cost is unknown, after a while you just throw away the receipts and enjoy your passion.

Hundreds of cars participated in this event. We took a plethora of photos to bring you some of the highlights. On Cruise Night we captured this 1958 Corvette.  Pete was particularly fond of this 1955 Chevrolet 210 Sedan. This is exact color and car that he owned for 12 years.  Pete's was completely stock. This one is close with the exception of the grill, hubcaps and removal of the really cool "bird" hood ornament.  Note: In these photo captions bold descriptions are accurate while guesses are in regular font. 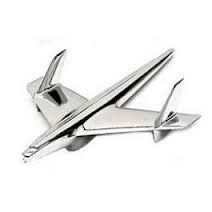 Bill and Willie cruising in the 49 Merc.  The body work on this car is extensive. While the basic shape is original, Bill had all non-movable panels welded together. And the original square-cornered junctions were beautifully rounded, such as the curve you see where the hood meets the windshield.

Syl with Shirley taking a photo of Pete shooting them! This 1934 Dodge DR Deluxe body has been restored to original condition. The engine and running gear (like most of these classic cars) are from much newer cars and perhaps not even the same brand. 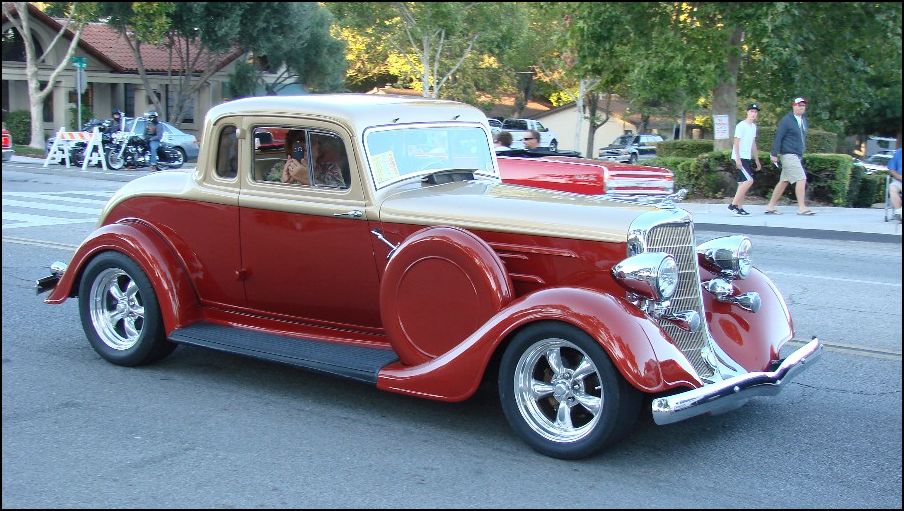 1937 Ford and a array of classics parked at the iconic Paso Robles Inn.

On Saturday the cars were parked on the lawn at the Paso Robles downtown park.  The cars were grouped by categories. The Corvair Corsa was created in 1965 and built until 1969. It was the only Corvair at the show.

A 1929 Ford Convertible.  "Low riders take notice", this 1967-68 Chevy truck is sitting on the grass. You can only hope that the air bags inflate when it is time to go home.

Frank admires this car on Mustang Alley.  The 194x Fords are looking like crocodiles ready to bite.

This 1929 Ford Convertible had a matching trailer loaded with surfboards ready to go to beach. This stripped down 1932 Ford is ready to race.

The body of this 1967-68 Camaro looks stock on the outside. Under the hood, the engine block is black metal but every other part has been chromed!

The 193x Fords lined the sidewalk facing off this, well, uh, the body is from a Model T, the rest is anybody's guess.  Henry would be proud.

Like almost all classics here this 1929 Ford Panel Van has a modern engine, chassis and tires. 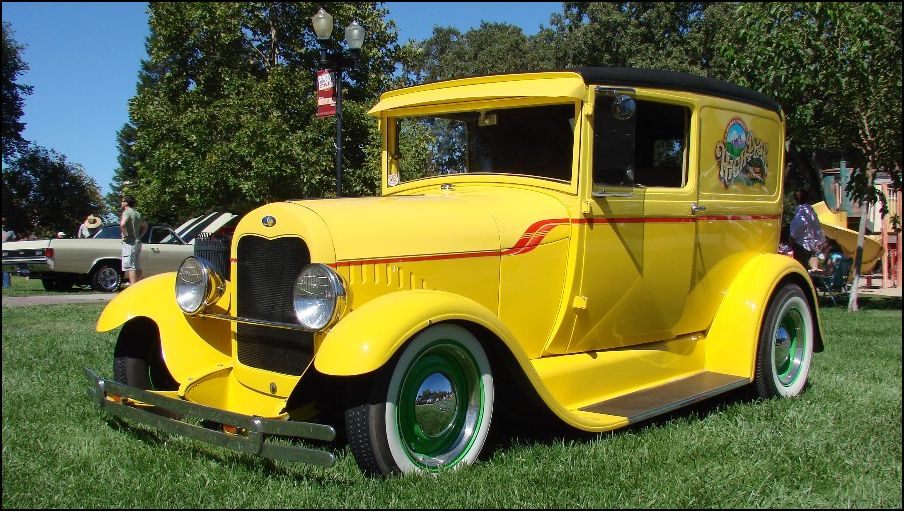 Every car at this show had to be 1979 or prior, licensed and finished!  Sorry Don, no Rat Rods.  Almost every car has an engine so clean that you could eat off it. This is Bill and Willie's 1949 Mercury. The engine compartment is just as clean and inviting as the car's interior. This car still has a Mercury engine, a V-8 as it came with.

Syl and Shirley's 1934 Dodge DR Deluxe likewise is beautiful throughout.  The engine, transmission and running gear have been upgraded to make it a delightful car to drive. The interior has been left pretty much original but the paint and finish are a tad bit flashier than the Dodge factory produced.

Back at Saturdays' show, entrants, spectators and friends await to hear about the rewards.  There were many awards in lots of categories.  We would hate to be judges as a majority of these cars were beautifully clean with flawless paint and chrome. Somehow the judges managed to pick their winners.

It is always fun to be "invested" in an event, rooting for someone you know or have met. So we couldn't be happier when Syl and Shirley won Best of Show for their 34DODGE. Congratulations to you both. 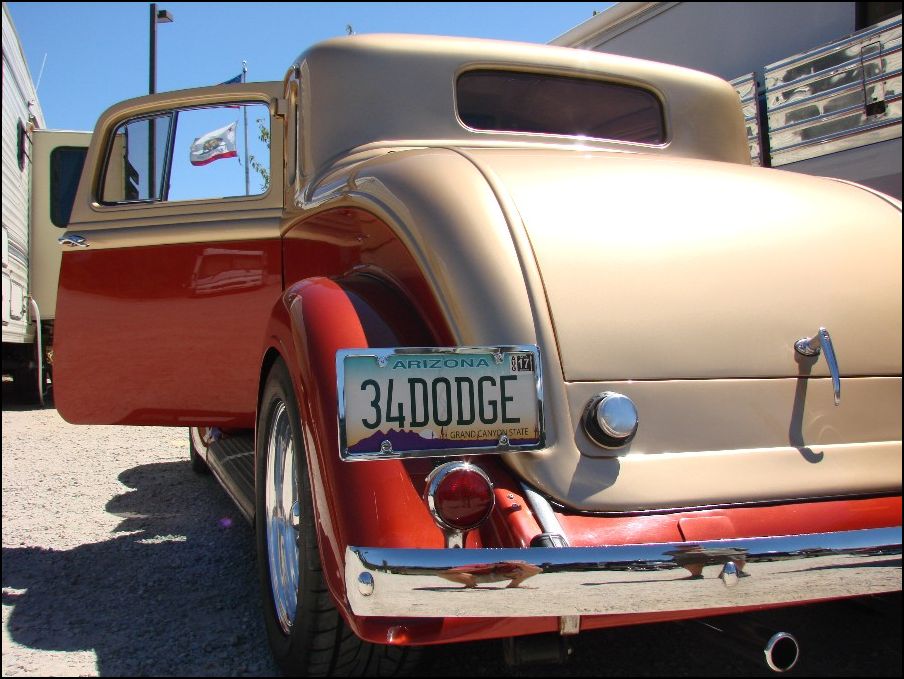 And finally, no classic car show is complete without BanjerDan who entertained those at the park with his talents and smile.  Dan is a recent resident of Paso Robles having moved here from Washington D.C. Welcome Dan, we're glad to have you.  Dan  performs and offers instruction on the Banjo, Guitar, Mandolin and Dobro. He can be contacted at (202) 718-7868. 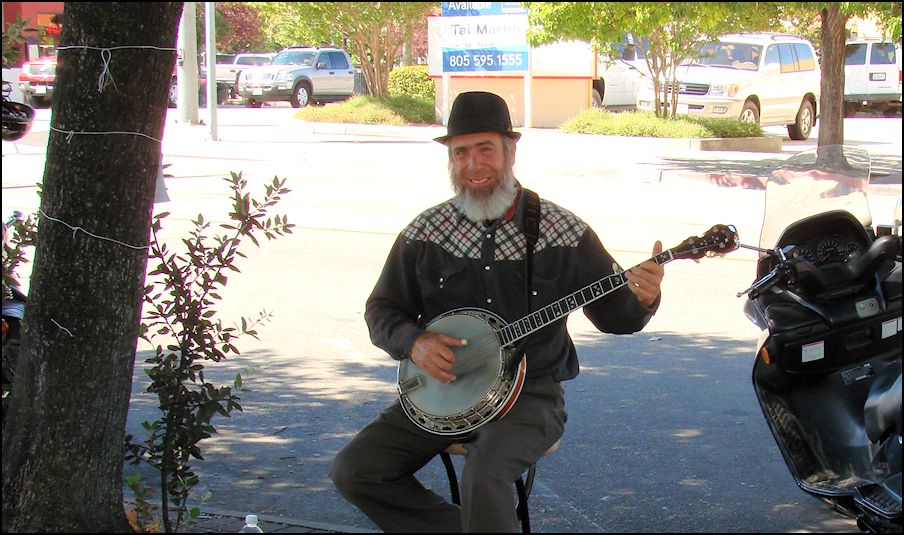 Those in our home area might wonder why we report on things here at home. Well, we didn't see anyone here except the Nunez's, so where else will you get this kind of reporting of your local events?

Have wonderful week and be blessed, love, Pete, Ellen and Mandy