[Editor's Note: As we are sequestered at Palm Creek Golf & RV Resort until March 6th, we will bring you more of our photo collections during this time.]

This is our first visit to a presidential library. We have spoken with many RVers who have visited many of the libraries.  We are told that every library is a great visit.  Even if you did not care for a particular president's policies, the libraries are full of artifacts of that era and that makes the visit worthwhile.

Dwight David Eisenhower was president from 1953 to 1961.  He followed Truman and preceded Kennedy. The library is located in Salina, Kansas, 26 miles from Eisenhower's boyhood home of Abilene, Kansas. 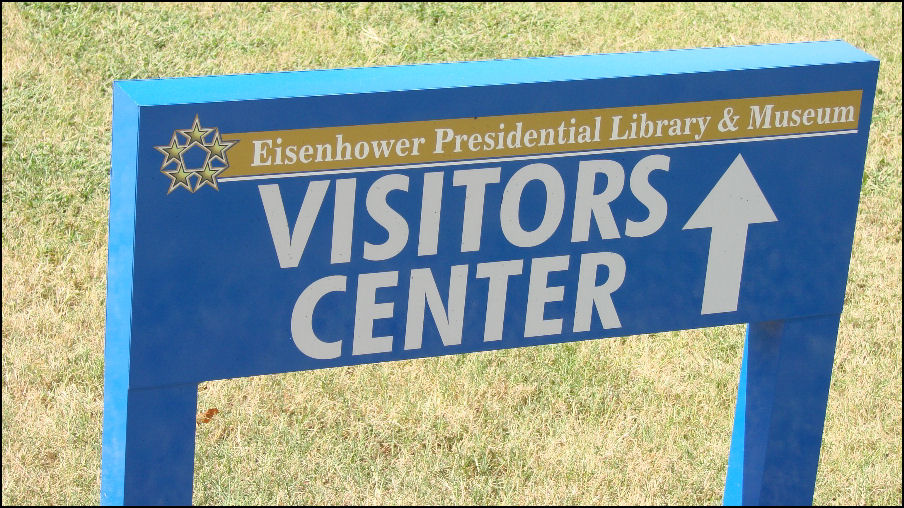 Eisenhower's nickname was Ike. This name came from the German pronunciation of his last name, "Ike-en-hower".  Ike was born in 1890 in Denison, Texas. But by age two the family moved to Abilene, Kansas.  At eight years old the family moved to this house in Abilene.  Ike spent all his years in Abilene until he joined the military at West Point.  This house from Abilene now resides on the library grounds in Salina. 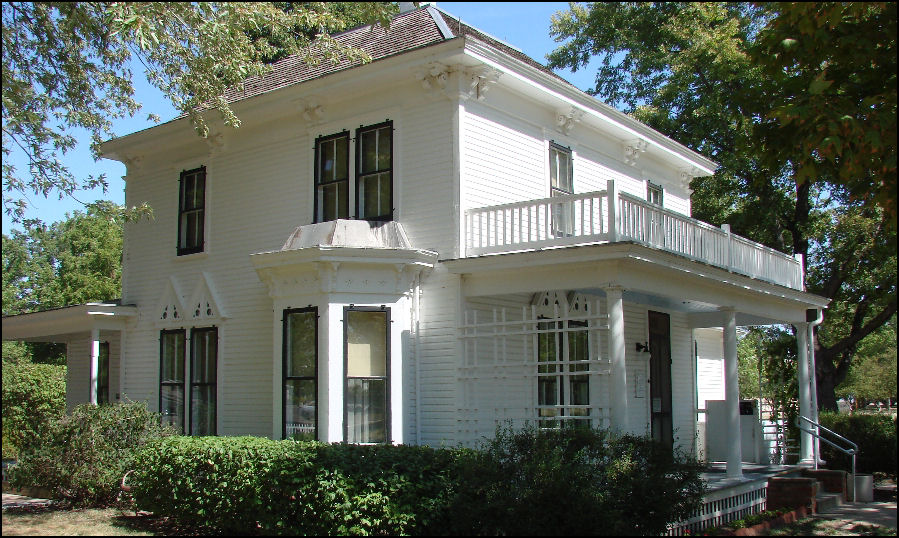 Ike attended West Point from 1911 to 1915 when he graduated as a Second Lieutenant. The following year he married Mamie Geneva Doud.

In 1943 Ike was appointed Supreme Commander, Allied Expeditionary Forces.  His most famous military accomplishment was his commanding of forces of the Normandy Invasion.  On December 20, 1944 Ike was promoted to a 5-star General.  He continued his service as the Military Governor in Frankfurt, Germany and Chief of Staff, U.S. Army. In 1948 he was inaugurated as President of Columbia University, New York City.  In 1950 he was named the Supreme Allied Commander of NATO, the North Atlantic Treaty Organization. 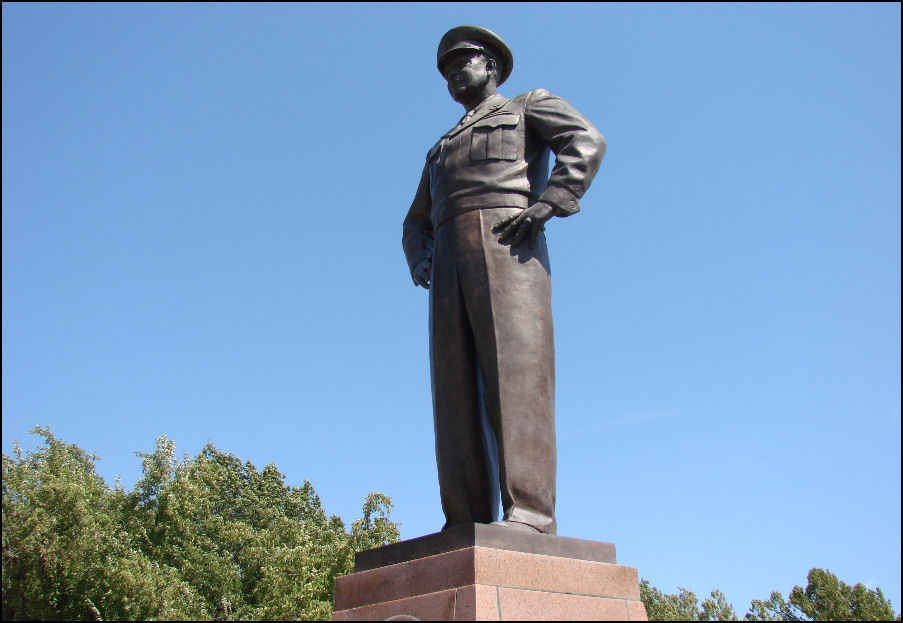 In 1952 Ike retired from the military, and announced his candidacy for U. S. President. Both parties wooed him. He was elected as a Republican and served two terms from 1953 to 1961.  His management and governing experience prior to the presidency is incredible compared to some of our recent presidents or candidates.  [Editor's Note: The majority of this information is from the Library or the library's website.  The following list of presidential accomplishments is a direct quote from the website.]

This museum like all of the presidential libraries contains enough material to keep you occupied for many, many days.  We only had room for a few of the photos we took.

This room had a few of the vehicles used during WWII; the Jeep and the M20 Armored Car. 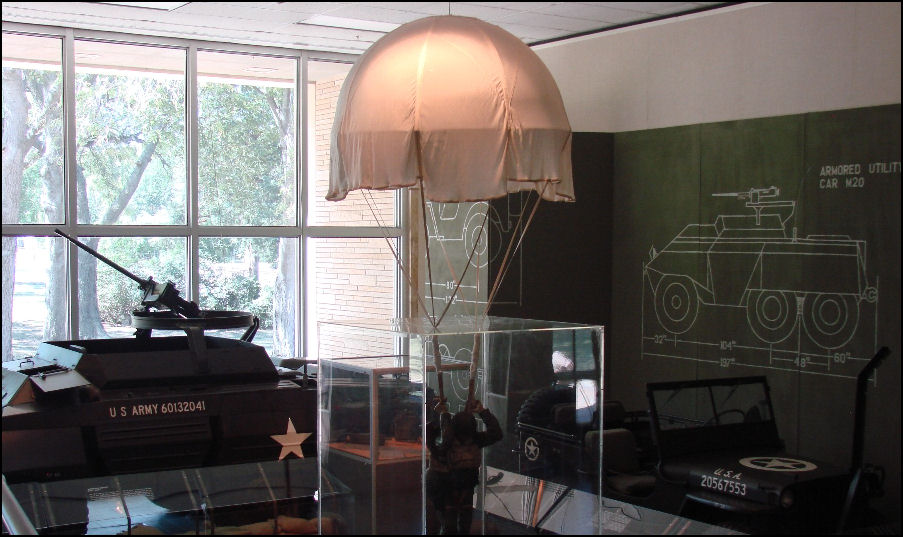 This 1951 sedan was used by Eisenhower to tour European countries during his assignment as Supreme Allied Commander of NATO. 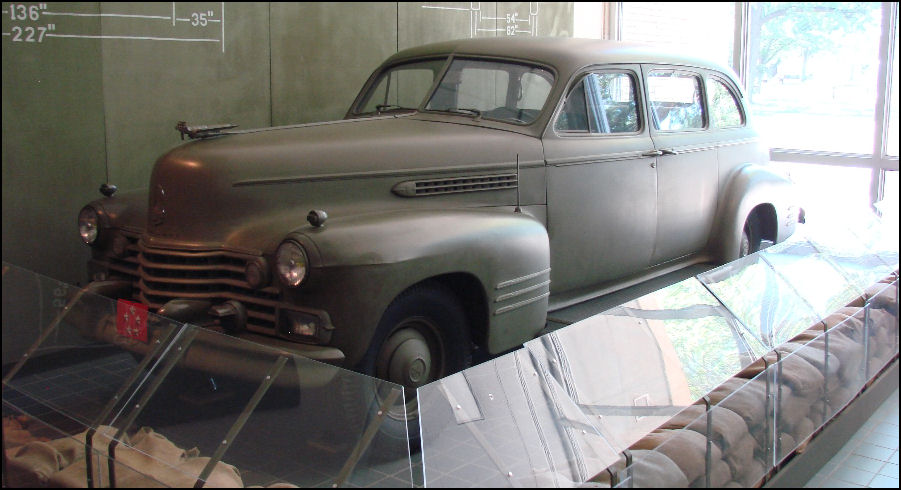 There is an extensive display of WWII era weapons.

A few of the statues depicting life during World War II, as a soldier, citizens reading about the war and a returning sailor.

The library is full of artifacts from the Eisenhower presidential years.

The television began to populate homes during Ike's tenure.  While a lot of today's universities seem to spew nonsense, we think Daniel Marsh was on to something!

We have only visited one presidential library. But, if this one is typical, they are truly fascinating places to spend a day or a week.  And, you get a great history lesson that won't put you to sleep like it did in school.

Meanwhile, back at the ranch: Ellen played in the Palm Creek Residents Pickleball Tournament with Joyce. They got the Bronze medal in the 60-64 age group. And they won the Silver medal in the Women's 4.0 Skill event.  Woohoo!

Enjoy your days and we'll see you next week.