This week is proof that we don't always know where we are going. From Devil's Tower, we headed through Sturgis to Rapid City, South Dakota. That was our plan. From there we thought we would head south through Nebraska into Colorado.  Not so, we are headed to Kentucky. That will be the topic of a future travelogue. 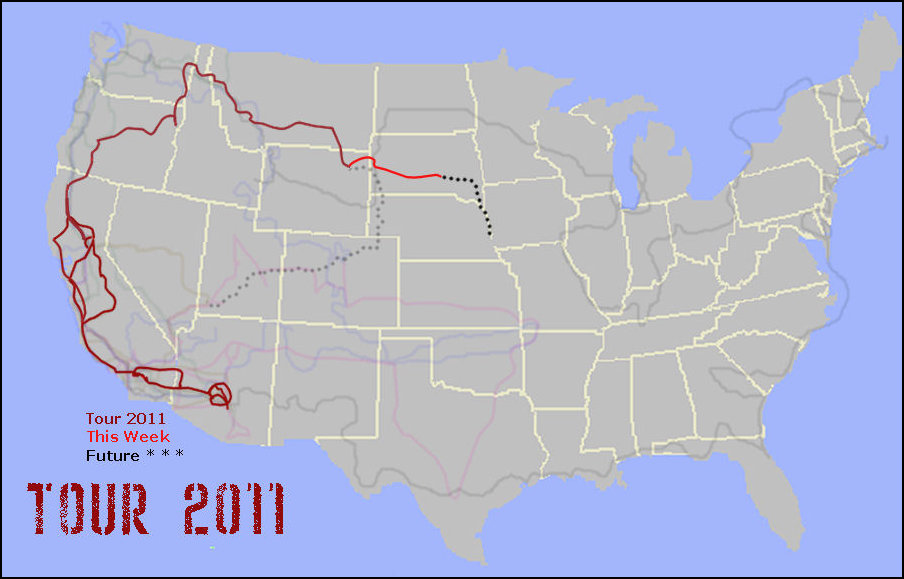 Sturgis, South Dakota is the home of the world's largest  motorcycle rally.  This is not Sturgis.  It is Hulett, Wyoming.  It is 66 miles from Sturgis and it is eight days before the official rally starts. But, this little town is full of bikers.

The Sturgis rallies started in 1938 and have continued every year except for a few years during World War II.  Attendance reached 400,000 in 1990 and has not dropped below that number since.  It is estimated to have exceeded 600,000 in several years.  There are many activities during the rally and one of the favorite are road trips. So, it is not unusual to see lots of motorcycles hundreds of miles from or going to Sturgis.

This peaceful road is between Hulett and Alva heading east toward Sturgis. 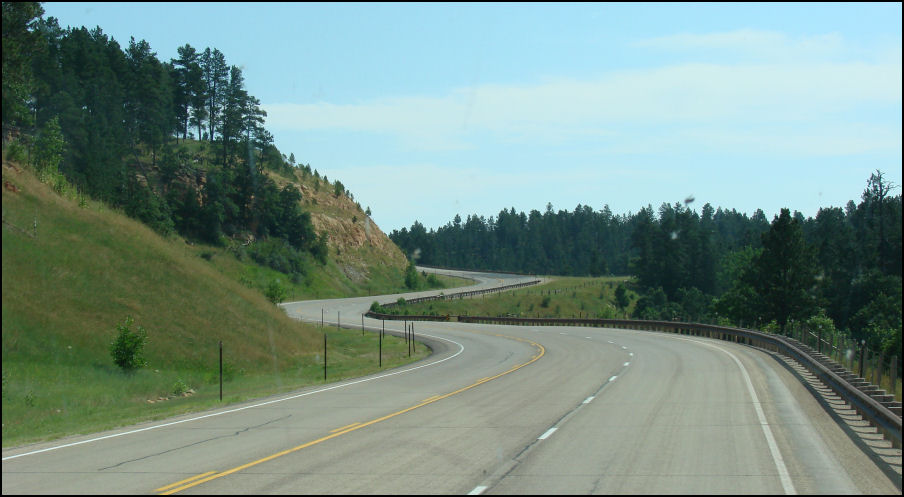 Also on Hwy 24 is the town of Alladdin with it's 110 year old general store and a population of 15.  There were more bikers than that at the store on this day.

BigRigBible.com has pictures from all of the 305 RV parks, campgrounds and Elks lodges that we have stayed at. We don't usually put the parks and camps in the travelogue, but this City of Spearfish campground was just too lovely.  Our site backed up to the hiking trail and creek. 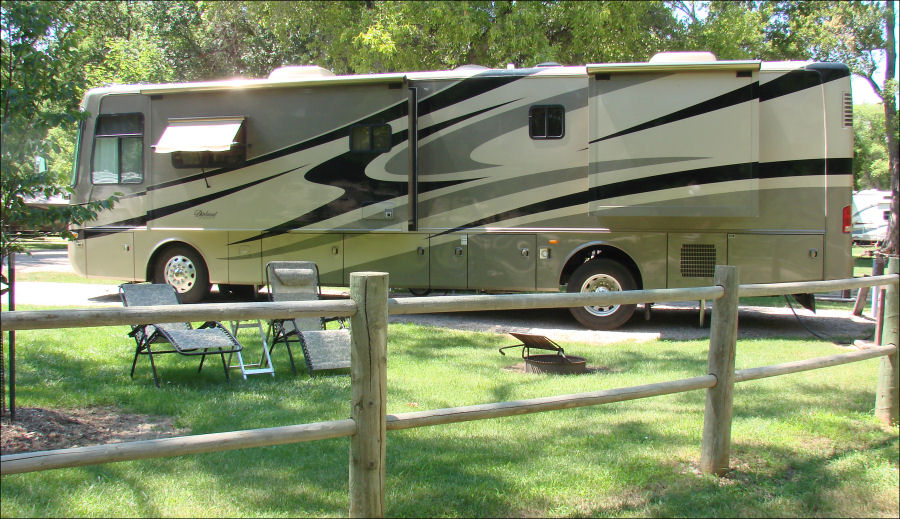 1) The camp was full of bikers. Some in tents, campers, trailers and motorhomes.  A couple of bikers were pulling tent trailers that featured a double bed when unfolded. 2) This park is home to the D.C. Booth Fish Hatchery.  2) Ellen tried to get get their attention, but these two were too engrossed in fishing to notice.

With temperatures in the 90's everyone was in the water to keep cool.

We arrived at Sturgis five days before the rally was to start.

Already there are hundreds of vendors setting up their tents. In total about 800 vendors will be ready for the crowds for the 71st Black Hills Motorcycle Rally.

1) When the rally starts, this street will be closed to cars and jammed with bikes. 2) We thought that maybe this vendor bought a few too many shirts to sell. That was before we saw a hundred other stores with just as many or more shirts.  And, you will need a lot of shirts if 600,000 riders show up.

The Sturgis Motorcycle Museum and Hall of Fame is a must see. Filled with over 90 vintage motorcycles, you get to see in person the historical progression from motorized bicycles to today's modern cycles. 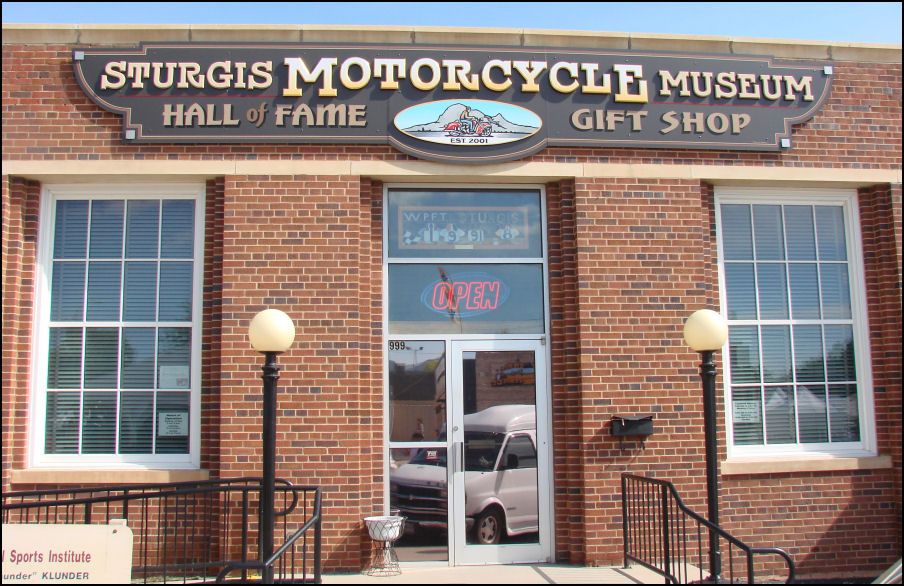 Entrance to the museum is a reasonable $5.00. There are enough bikes and history to read that you could spend all day here.  This travelogue has a few samples of the bikes on display. For a more complete viewing click on http://bigrigbible.com/WeeklyTravelogues/week260A.php.

The founder of the Sturgis Rally, Clarence "Pappy" Hoel, purchased the Indian Motorcycle franchise in Sturgis in 1936. To promote motorcycle riding he started the rally in 1938.  It makes sense that the museum is chock full of Indians.

Today the majority of Sturgis attendees ride Harley-Davidisons.  Most are newer than this 1932 Model B.

Sundance, a 1949 cycle, is completely chromed, except for the tires and the seat.

1) The left side picture of Ellen's brother Larry is from Nan's 80th birthday party in Texas in 2006.  2) We found the second photo in the Sturgis Museum.  We are not sure, but we believe it is an age-progressed photo of Larry leading the 2020 Rally. 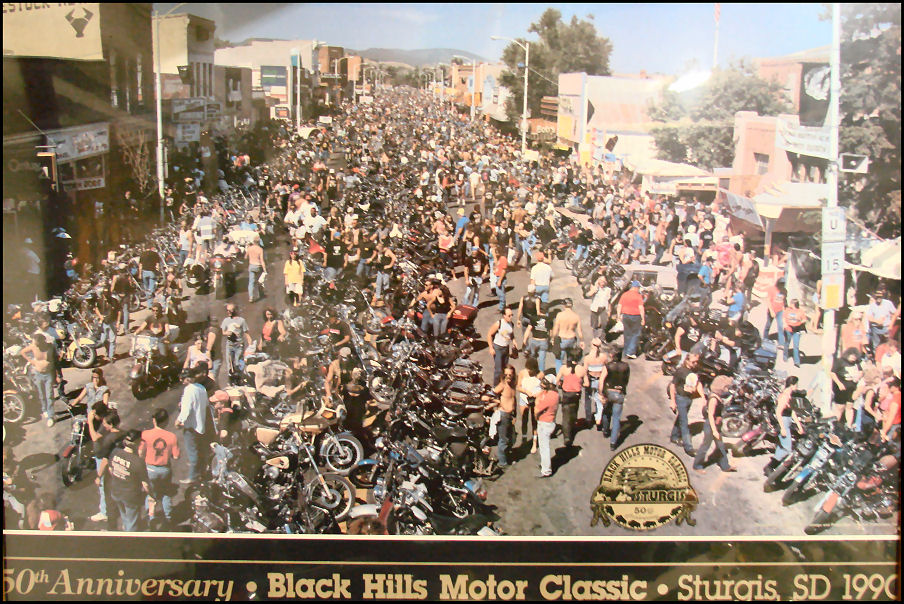 Good bye California, hello South Dakota.  Yes, we are now South Dakotans.  Why? taxes!  In California our DMV fees for the Mothership were $1,300.00.  In South Dakota, only $407.00.  Insurance is less, there is no income tax, sales tax is 4% and there are at least some elected officials that share our views.  But fear not, this changes nothing. We will continue to travel and visit California as we do now. 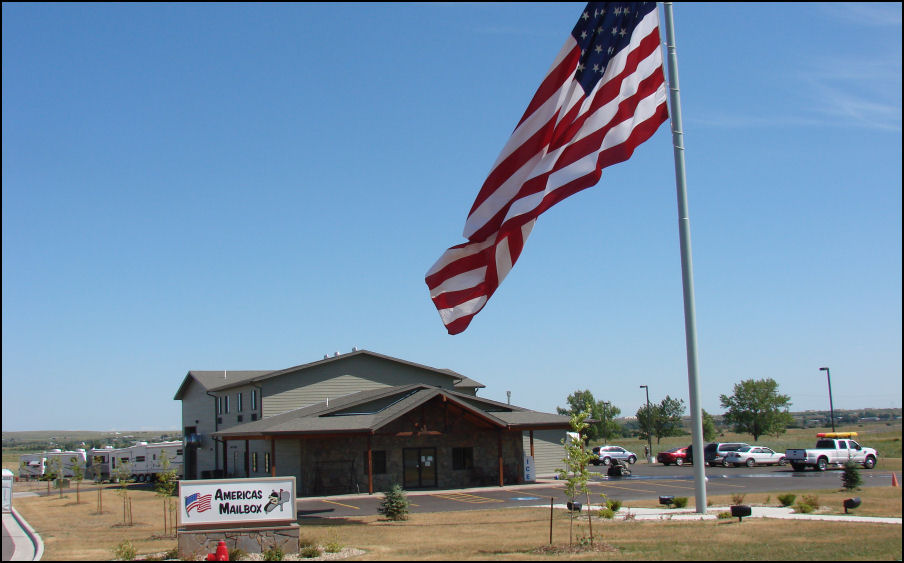 It took only two days to get our driver's licenses, register to vote and apply for our vehicle plates. So we moved on to the the East.  Leaving Rapid City, it is 54 miles to Wall, South Dakota.  One of our original RV mentors "Craig", as well as a few thousand other RVers we have met, say you have to visit Wall Drug. As we headed toward Wall, we noticed a lot of Wall Drug billboards.  After a few dozen had passed us by, we took pictures of all the rest.  Here are the last 30 signs before you get to Wall coming from the West.  Yes, Wall Drug is amazing, but the advertising is equally impressive. 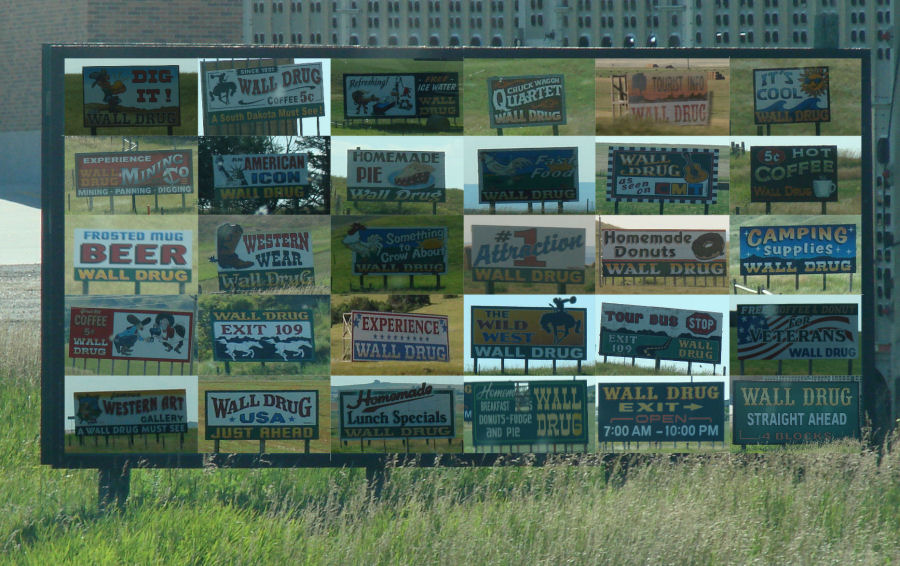 What started as a small drug store in 1931 by Ted Hustead, now covers a city block.  It was a typical small-town drug store until his wife Dorothy had the idea to give away free ice water.  The rest is history and you can still get free ice water today and 5 cent coffee.

The are Wall Drug signs throughout the world, this one in Turkey put up by the South Dakota National Guard. Wall Drug has dozens of stores and attractions.

Art to buy and some just to appreciate.

A chapel for you to visit.

The new "backyard" has animals; some bronze, some concrete and some stuffed.

When Ellen's saw this guy riding the bucking bronco, she said "sure, but can you ride the bunny?".

1) This photo is about four by six foot.  2) Just a little history below .  It would take several days to be able to read all the history at Wall Drug. And, while we did not see it, Wall Drug might even have a pharmacy! To see even more of the Wall visit http://bigrigbible.com/WeeklyTravelogues/week260B.php.

What week! From Devil's Tower to Sturgis to Wall Drug. And next week, on to Kentucky.