We're Back! Did you miss us?

Sorry we were gone so long, but we were not in any new venues.  We left you at Feather Falls and went home to Atascadero for a few weeks.  But, we're back now and as you can see, we're off on another adventure.  We like to visit new places, so we will travel through eastern Oregon and Washington, across southern Montana, down western Nebraska, through some new territory in Colorado, to Bryce Canyon in Utah and end up in St. George, Utah for the 25th Annual Senior Games in October. 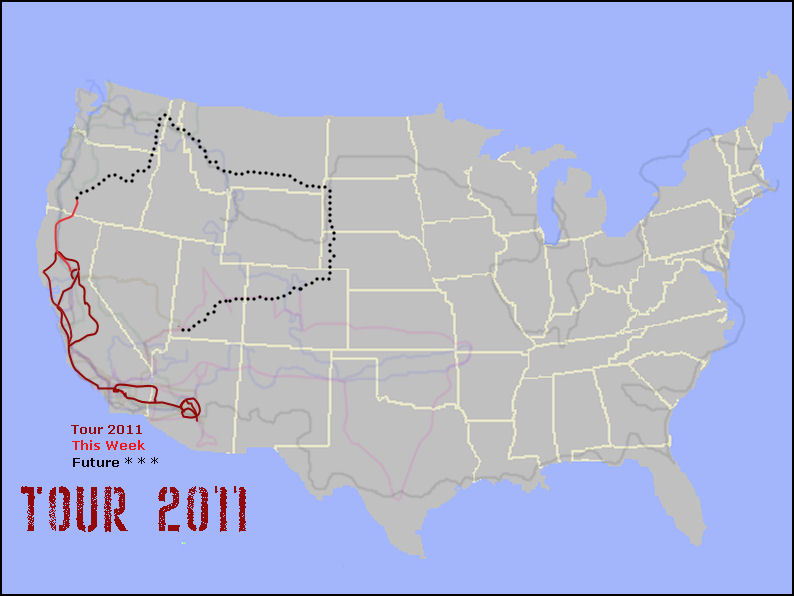 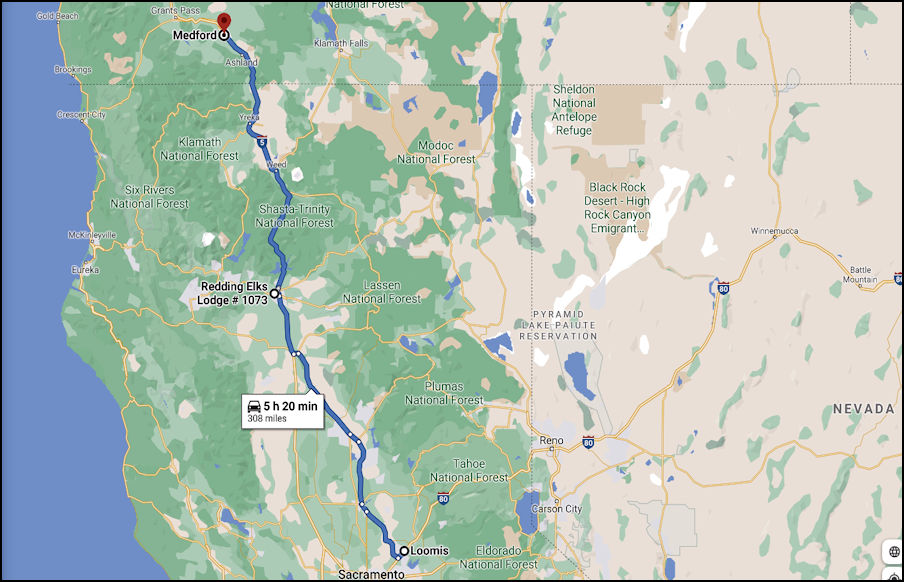 We had a great visit with Pete's sister Donnalee in Redding, CA. 1) We watched the 10:00 pm fireworks in shorts and T-shirts as the daytime temp was 100+.  2) Donnalee's friend Don was getting out of Redding to cool down. So we followed him to Weed, CA which is at the base of Mt. Shasta.  2) This is the first glance you get of the mountain as you travel up Interstate 5.

Who would name a town Weed?  Abner Weed, of course. Abner purchased 280 acres in 1897 and built a lumber mill, which was to become the world's largest by the 1940's (ref: Wikipedia> Weed CA). Okay, now who would name their son Abner Weed? Dunno! 1) Try the hamburger at Cougar Cafe in the Weed Mercantile Mall.  2) You get a view of Mt. Shasta from the Crystal Geyser water company in Weed.

In fact, at 14,179 feet, you get a view from Weed, from your campground, from the streets of Mt. Shasta and from every road surrounding the peak.

We took the road from Mt. Shasta as far as we could. This is the view from Bunny Flat at 6,950 feet.  With the late snow fall this year, you could not go any further. 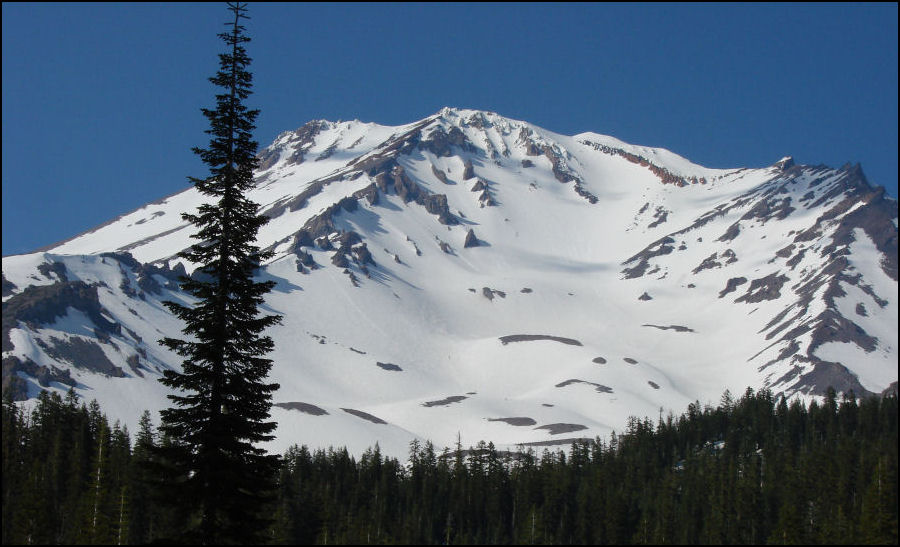 But, no problem, you can even see the mountain from your car! 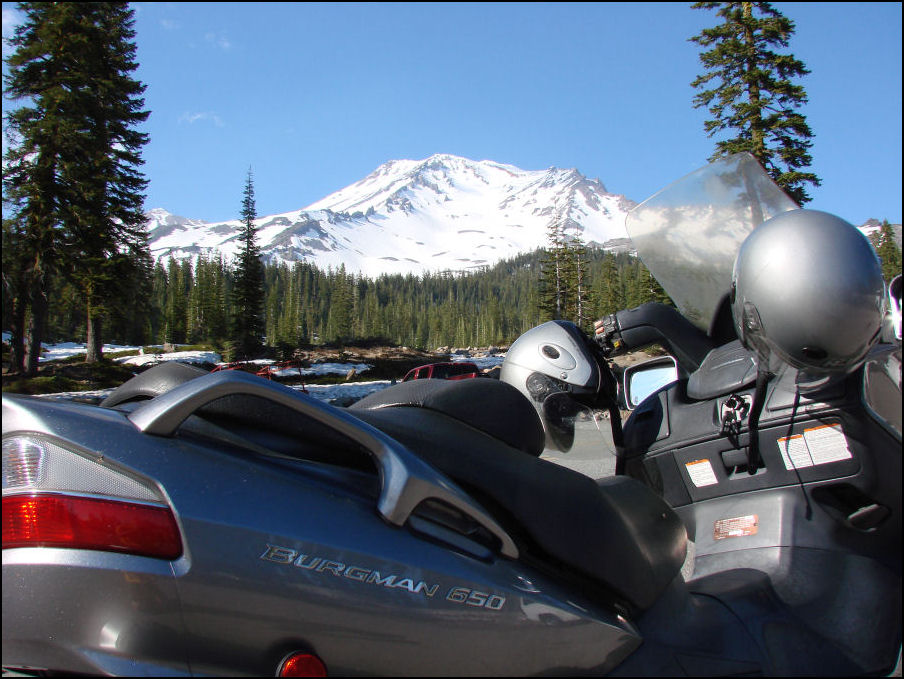 We left Weed and headed Northeast toward Klamath Falls, Oregon.  Along the road Mt. Shasta is behind you and out of sight if you are not looking circumspectly.  We saw a sign that said only "View Point".  We stopped to clean the bugs off the Mothership and voila, another great view of Mt. Shasta.  This time from the North. 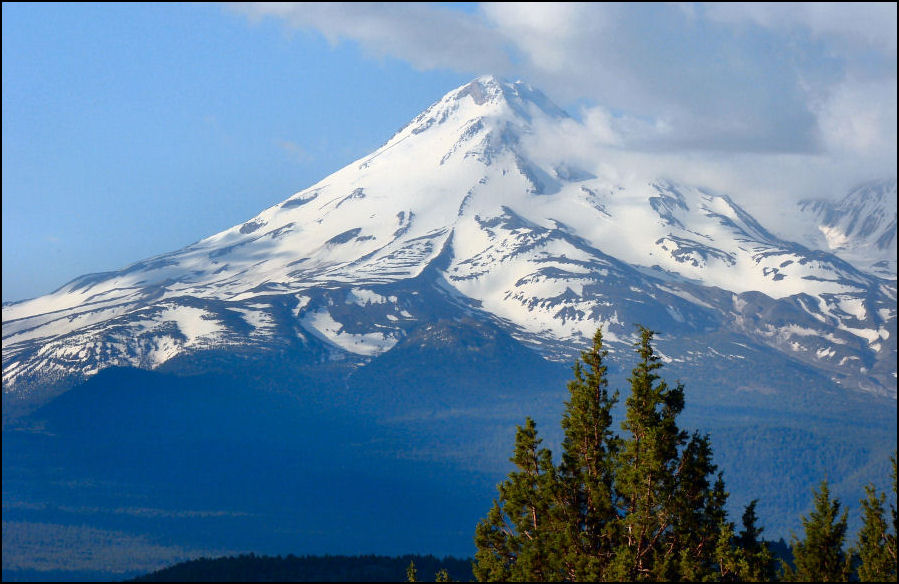 With Shasta behind us, we continued up Highway 97. 1) We think this sign is welcoming us to Oregon. Oh, my!  And look at the traffic.  Just kidding Oregon, this road is still in California and they are nicely repaving the surface, so there was only one lane available.

1) This little puddle is on the southern edge of the city of Klamath Falls.  We got off the highway to cruise the city; it is very neat and clean. 2) Just north of town is Upper Klamath Lake, the largest fresh water lake in Oregon.

Our goal this week was to visit Crater Lake. We tried for many years, but it was never on our path.  We stayed at Diamond Lake RV Park, which is the RV park closest to Crater Lake. 1) Diamond lake is flanked by Mt. Bailey on the west and 2) Mt. Thielsen to the east.  These photos were taken from the Diamond Lake View Point where the Verizon Internet access was great.  Once down the hill to the RV park, we could barely get an email.

1) Our next day, we were off to Crater Lake. Most people rave about the lake's beauty, so we were anxious to see it.   2) Along the way, we encountered some native wildlife.  Not knowing this species, we kept our distance.

Again, because of the late snow, the closer we got, the more snow there was.  The east loop around the lake was still closed due to heavy snow.

The lake was formed when the volcano blew its stack.  As you approach the lake you are on a upward path. And finally, as you reach the peak, this is what you see.  This water is the most beautiful color imaginable.  This is the view the camera can see. 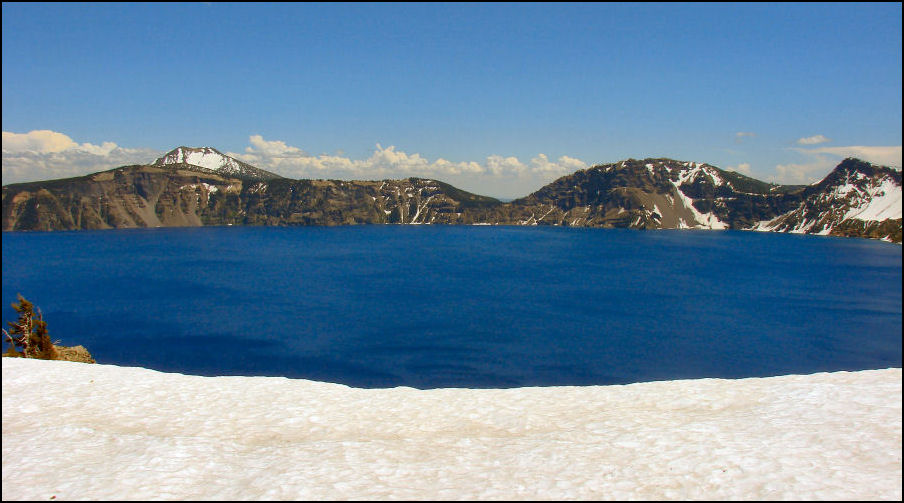 But, people with their incredible God-given peripheral vision, see this. Wow!

This panoramic photo was created from four individual pictures. Oh, by the way, those black dots are not bugs on our windshield as many of our photos have. Click on the photo for a larger view.

A road surrounds the lake and there are a dozen viewpoints.  Note the that shores of the lake are very steep. We surmise that this boat was dropped in by helicopter.

The south end of the lake has a gift shop and cafe. The snow falls against the building. As the heat from the building melts the snow, it leaves a snow arch.

Coming back to Diamond Lake you get a view of many other peaks and valleys.  The shores of Diamond Lake did not have snow, but we are sure the water is still very cold.  We did not go in, but many people were swimming.

The panoramic photos below were all created from five to eight different snapshots.  Then they were "stitched" together using The Panorama Factory software from Smokey City Design.  Panoramic software can cost from free to thousands of dollars. The free ones are pretty worthless, but The Panorama Factory is only $80.  If you buy it, just use the defaults as there are hundreds of very confusing settings. Got any questions, send us an email.

Each of these pano's are 900 pixels wide. Click on the photo for a larger view.

Truly, God has created an amazing world and we have seen only a little portion of it, so gotta go!