We Go Where We're Towed, 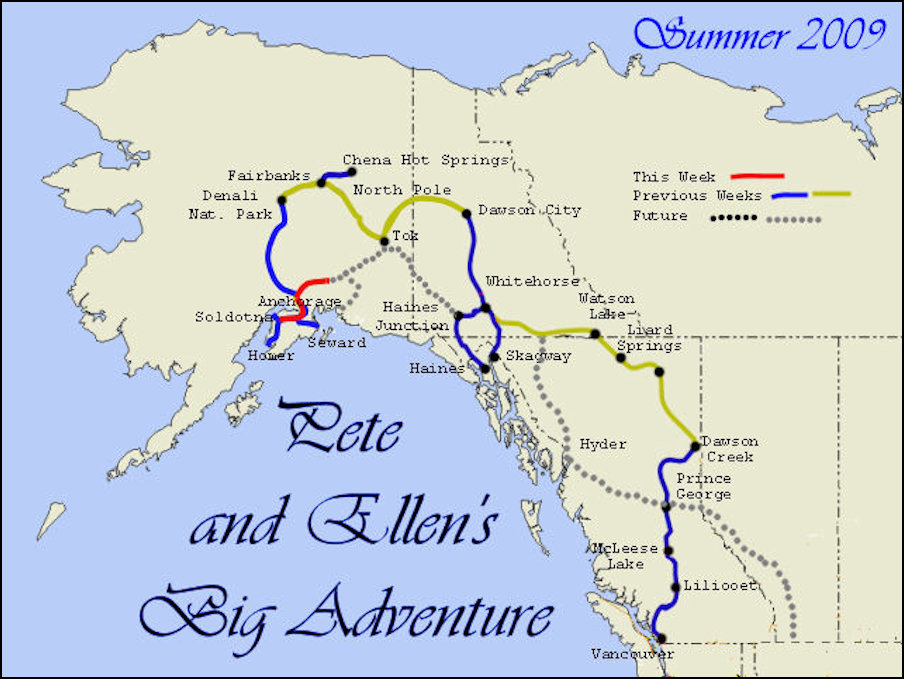 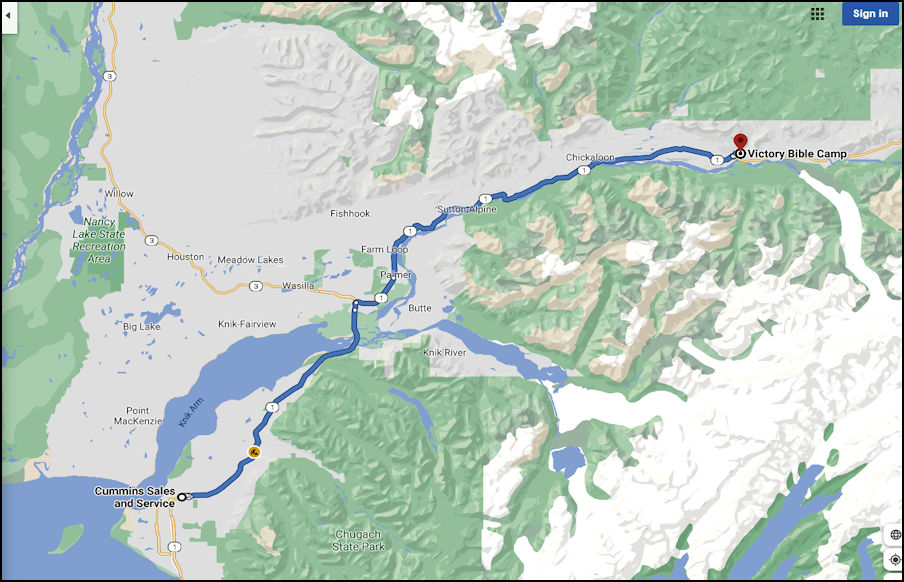 We left off last week with photos of the MotherShip aboard the FatherShip!  Our Stop Engine light came on so Pete looked up this light in the Monaco manual.  He found what it meant.  It means Stop your Engine!  And when the light comes on, it "de-rates" your power.  It gives slow speed power to allow you to drive your vehicle to a safe location.  From there we called our tow service, Coach Net.  They coordinated a 150 mile tow back to the Cummins Service Center in Anchorage. We were totally pleased with our young driver Nick Webb who handled the Mothership with care.  A big thank you to Webb's Towing & Recovery.

We learned from Cummins that our diagnostic code of 296 could be as simple as a bad sensor, to as complex as tearing down the engine and replacing the piston pins and connecting rods.  So we got busy learning about the week's activities in Anchorage.

On Monday, Wednesday and Friday, Anchorage hosts "Music in the Park" from Noon to 1 pm.  We came on Wednesday and enjoyed the music of the Carhartt Brothers, Bob, Little Bob and Big Bob.  As you can see they drew a good crowd.

By Friday we learned that our sensor was mis-wired; the problem was simply corrected and we were free to go.  We headed off toward Sutton, Alaska.  On the way we stopped to view Thunderbird Falls north of Eagle River.  This 200 foot waterfall was the first of any significant size that we have seen in Alaska.  If you want an endless variety of huge, beautiful mountains and millions of lakes, come to Alaska.  If you want waterfalls, go to Yosemite National Park in California.

Pete's only regret as we reached this milepost is that we weren't traveling at 55.5 mph!
The water in the river is gray colored from the particles ground up by the glaciers.

Through our SOWERS project at Camp Li-Wa in Fairbanks, we got an invitation to visit Victory Bible Camp along Alaska's Glennallen highway.  1) Due to road construction the Camp Victory sign was down and we saw the small Victory Road sign too late to turn.  So we traveled down the road and at a viewing area for the Matanuska Glacier, we turned around.

Camp Victory, founded in 1941 spans 400 acres in one of the most beautiful settings in Alaska, surrounded by mountains and lakes.

This huge and modern complex was built over a 12 year period by volunteers and with donated materials.  It contains their office, dining hall, meeting rooms, gymnasium, gift shop and health center.  We arrived on Saturday evening.  We were met by retired Pastor Earl, now the camp electrician and by the camp cooks.  Cooks Gene and Adrian told us to get in line for dinner and then asked who we were!  They joined SOWERS many years ago, but due to their commitment to Victory, never could get to SOWER projects.

Next we parked where Pastor Earl told us to.  Our site with full hookups has perhaps, the most beautiful views we have experienced in 50 states.  Right on the edge of Shallow Lake we had 360 degree views of the lake and mountains.

The dining hall deck overlooks Index Lake, the camp's second lake.  It is filled with water toys for the enjoyment of the campers.

The view from our front window of loons on Shallow Lake.

As promised last week, we present The World According the Garth.  Dave and Sandy had the privilege of flying to two fantastic locations.  Here they landed on a glacier on Denali Mountain.  Their tour plane was bringing supplies to mountain climbers.

Dave and Sandy also flew to and stayed several days at Brooks Falls in Katmai National Park.  They had to get reservations two and a half years ago. Check out  these great photos of a Lynx and Wolf.  But Brook Falls is known as the best place in the world to see bears.

And the bears were out in full force on the falls. According to Garth: The bears waiting for salmon to jump up the falls can sit motionless for hours. 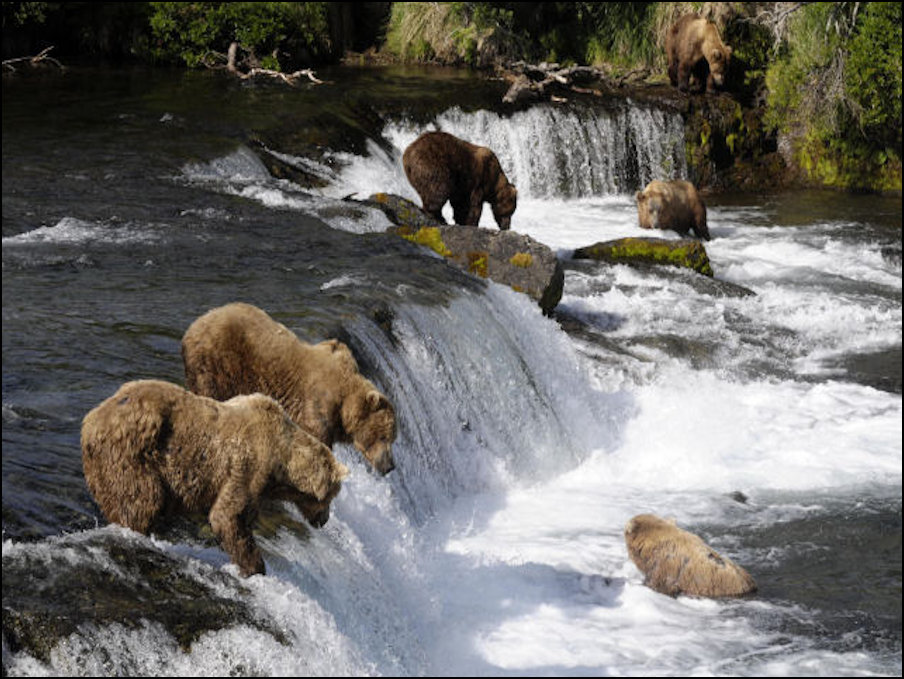 The salmon run is low this year.  1) This bear is one of the lucky ones.  2) These bears are fighting over this spot on the falls.

1) The momma bear rests with her cubs.  2) This bear sits motionless as this time exposed photo shows.

What's your caption for this fantastic photo?  Ours would be "Gee, I wish I was standing there!" 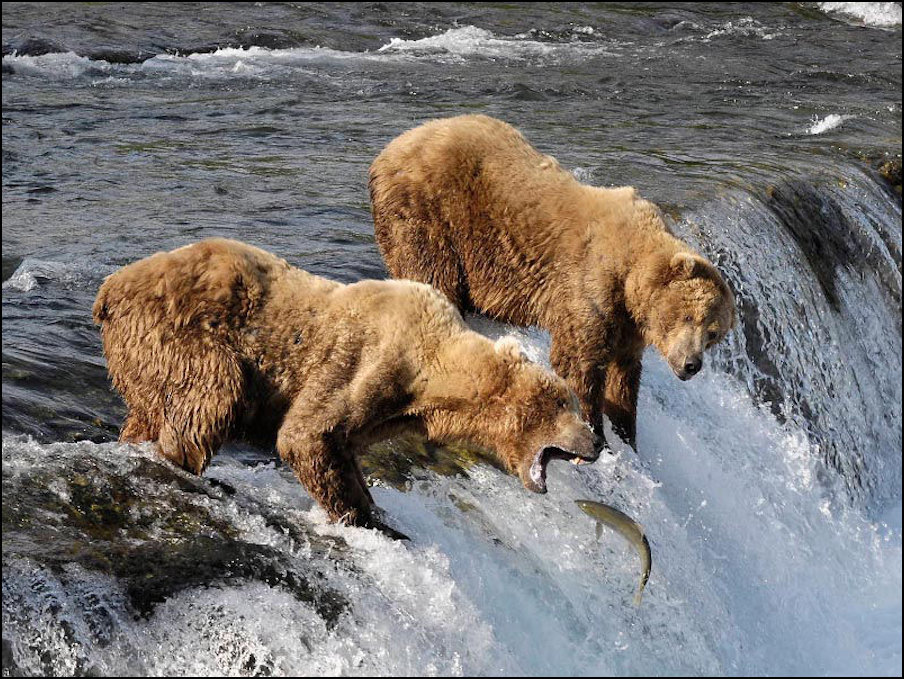 We expected to see lots of bears on our Big Adventure.  We did see about ten in Canada, but only one in Alaska (so far).  No, actually, now we have seen dozens. We want to express our gratitude to Dave and Sandy for sharing these photos.

We do hope to see more, in person, in Valdez and/or in Hyder.

Alaska is truly incredible and we are happy that you are traveling with us.  Until next week, love, Pete and Ellen