Good Day from the Land of the Midnight Sun,


After three weeks at Camp Li-Wa, we said good bye to our friends, flew the coop, and headed to Denali National Park and Preserve.

1) Pete & Ellen, Stephanie & Gary, Naomi & Jay, Rosie & John.  2) The Air Force treated us to a dozen touch and go's when we were parked in Fairbanks.

The drive from Fairbanks to Denali is beautiful like all other Alaskan roads.  God's creation is simply amazing. 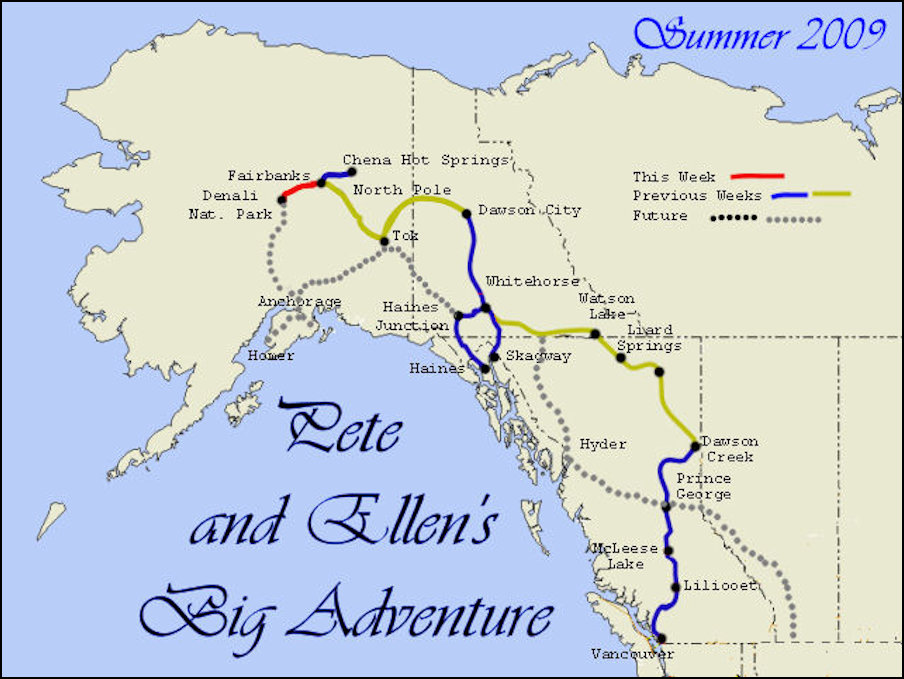 The entrance to Denali park is just one mile south of the cute little town of Denali.  We stayed at Rainbow Village RV Park which is right behind the Harley Davidson and other shops.

On February 26, 1917 Denali park began as the 1.2 million acre Mount McKinley National Park.  It is home to Mount McKinley which, at  20,320 feet, is North America's highest peak. Alaska has 17 of the 20 highest mountains in the US.  Denali, meaning "The High One" is the Athabaskan name and is preferred by the locals over Mount McKinley.  In 1980 the park's name was changed to Denali National Park and Preserve and was increased to over 6 million acres (9,492.24 square miles).  It is one of the largest contiguous preserves in the world.

There is a single 91 mile road into the park.  You can drive 15 miles to Savage River Rest Stop.  Beyond that you need to ride a bus or get a permit to camp at Teklanika River Campground which is at mile 29.  We drove to Savage River rest stop with our friends and hiked. We also took a bus to the Eielson Visitor Center. 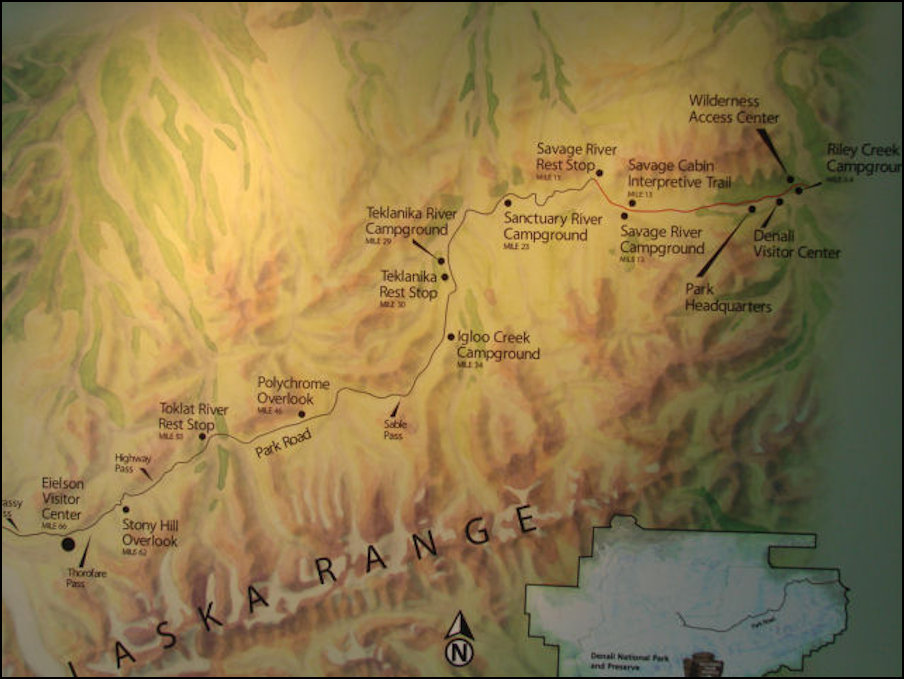 Our bus driver, Wendy, has been giving the tour for 30 years.  She will tell you that what you see will be different every day.  You will always see beautiful mountains.  But your chances of seeing Denali mountain are slim.  According to Wendy, she says that you will see Denali 20 days out of the 90 day summer season.  Park Ranger Ken told us that June averages only four days where clouds do not obscure Denali. You will also have a chance of seeing bear, sheep, moose, caribou, ground squirrels, marmots and 32 other mammals, golden eagles and 115 other birds, and one amphibian, the Wood Frog. And in the summer the wildflowers will be in bloom.

Moose, especially bull moose, do not typically hang out together.  We had the rare privilege of seeing three bull moose slowly following a fine moose cow.  Wendy was so excited and said that it made the whole trip worthwhile. 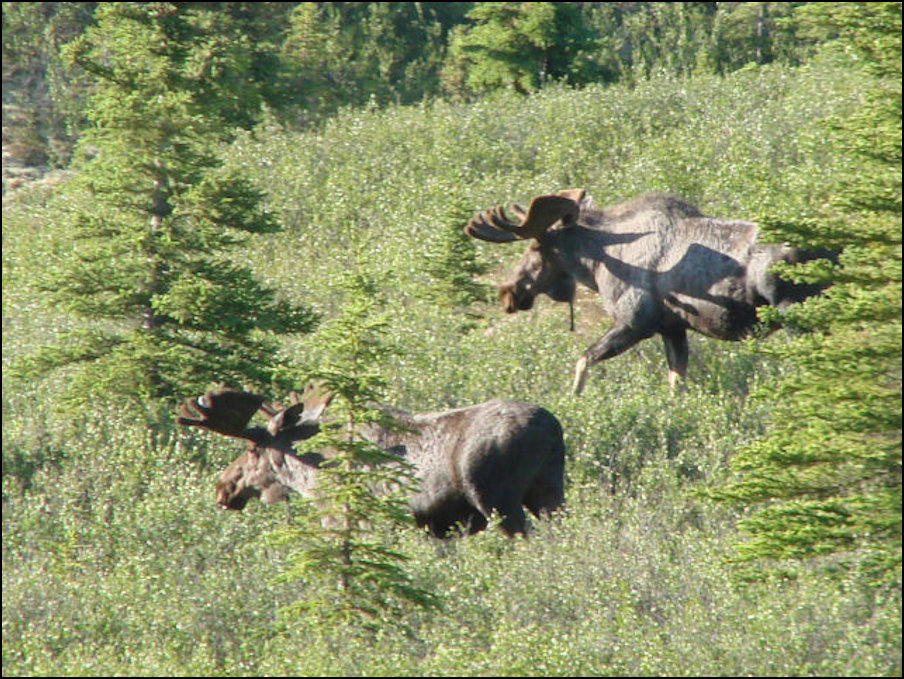 1) Well, praise the Lord!  We got this totally clear photo of Denali early on our trip. 2) The Teklanika River.  Teklanika is Athabaskan for wide river bed, little water.  Most of the rivers in the park are glacier-fed with water that looks like quick flowing concrete.  And the majority of them are braided rivers like the Teklanika.

The Ploy Chrome mountains offer a variety of colors with browns, whites, grays, greens and more. 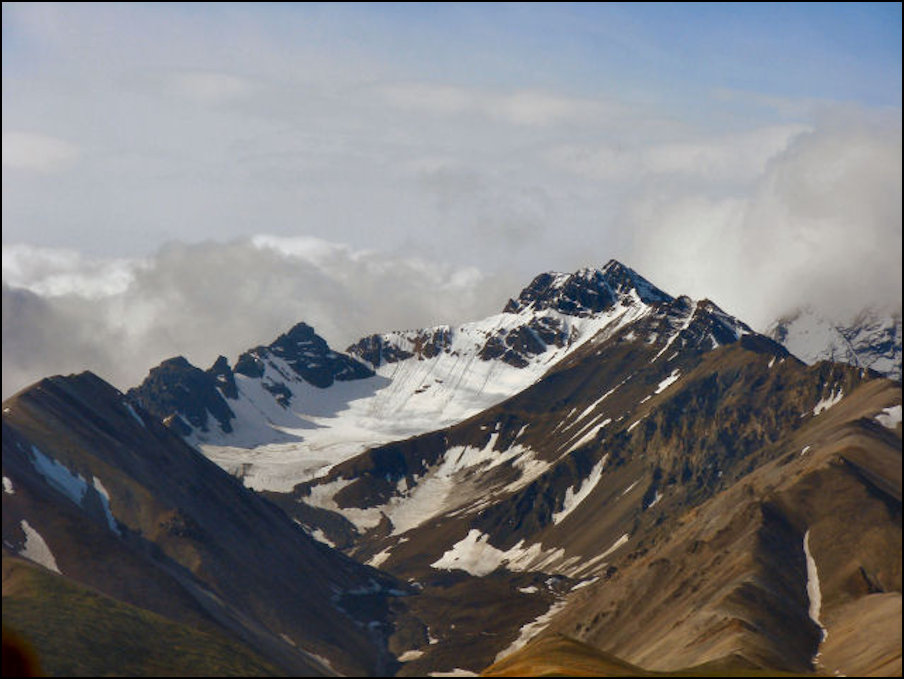 While most visitors are hoping to see Denali the closest the road gets is 20 miles.  The road, created in the early 1900's, has not been straightened or moved, only widened.  The road leads to Kantishna where gold was discovered.  While really not dangerous, the steep banks were enough to get some of the passengers to move to the other side of the bus.

More examples of the of the mountain colors in the Alaskan Outer Range, which is the range that Denali is part of.

Three hours into our trip Denali was still visible.  The rounded left side peak is the tallest at 20,320 feet.  The pointed peak on the right is 19,490 feet.  Denali rises 18,000 feet above it's plateau base.  The world's tallest mountain, Everest, reaching 29,028 feet, rises only 12,000 feet above the Tibetan Plateau.  Denali has the highest vertical rise in the world.  Alaska has 17 of the 20 highest peaks in the United States. 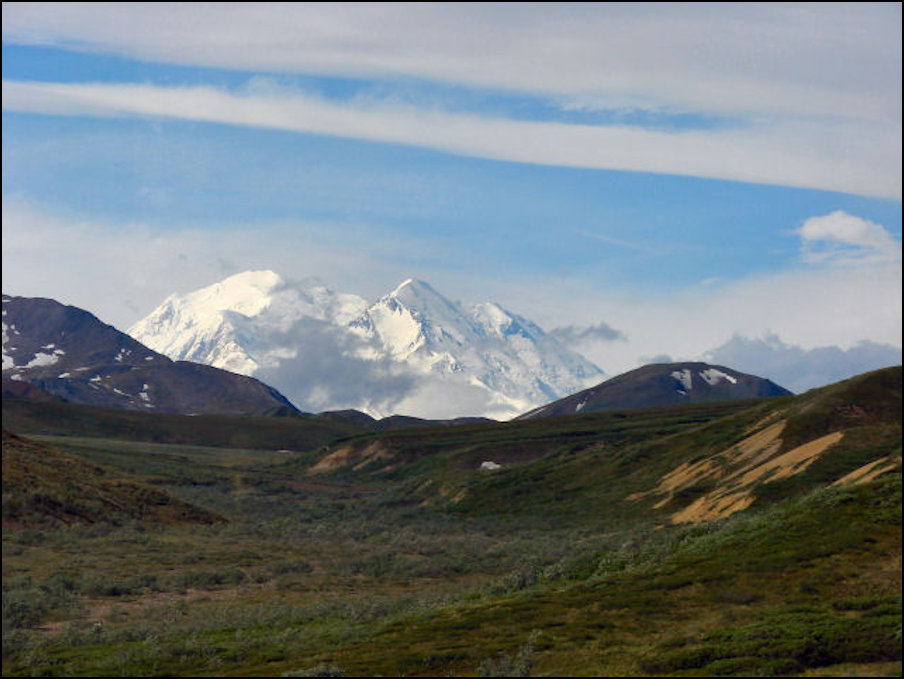 This was our view of Denali at about four hours into our eight-hour tour.  This view is from Stony Hill Overlook  just  three miles short of Eielson Visitor Center.  There are three bus tours into the park.  You can travel round trips of six hours to Toklat, eight hours to Eielson or 12 hours to Wonder Lake.  The buses are basically school buses but with rather nice, soft individual bucket seats; not bad!

Denali never came out of the clouds the rest of the day.  With only one of six visitors seeing the mountain, we were blessed. 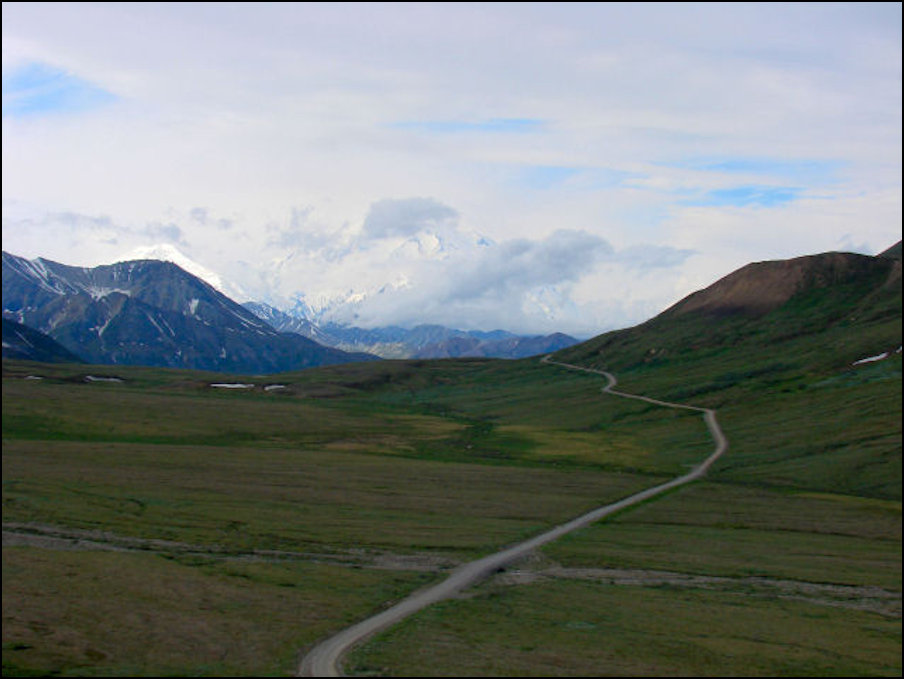 Now for some of the wildlife.  The Alaskan ground squirrel.  The little fella on the right at first posed out in the open, but as we took his picture he became bashful and hid under a rock.

1) The caribou relaxes on the snow.  The caribou is similar to the reindeer.  But as any Alaskan will tell you, to be a reindeer, the caribou needs to be surrounded by a fence.  2) These sheep were quite a distance away but better than the other "white dots" we saw.

On Sunday our friends, John and Rosie, drove us to the Savage River rest stop.  There is a nice 1.8 mile hike along both river sides. 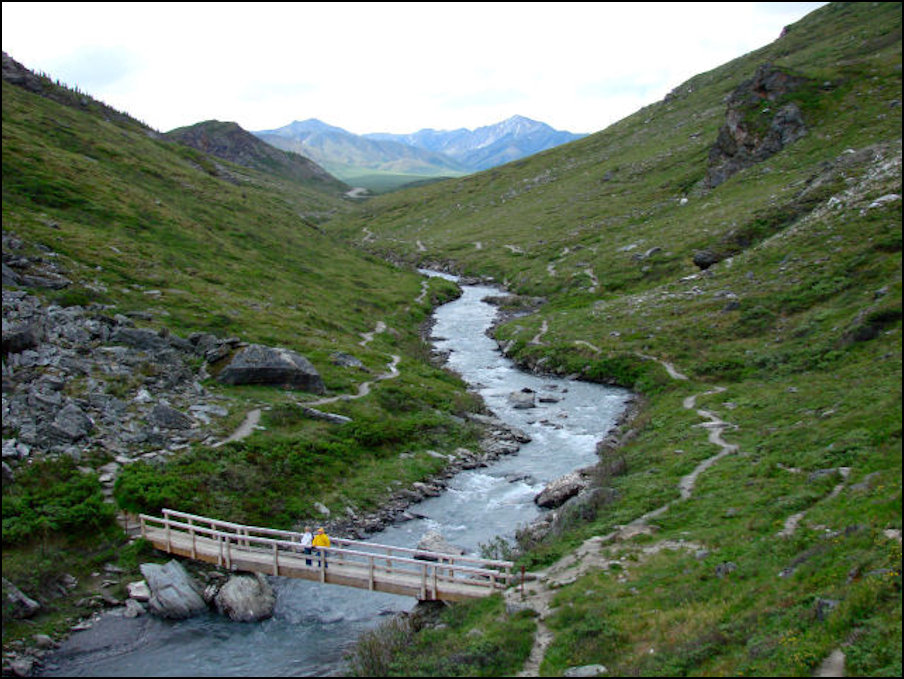 Many say the Alaskan state bird is the mosquito.  It is actually the Willow Ptarmigan.  They are very friendly.  This bird is very prominent in the town of Chicken, so they wanted to name the town after it.  However, since the community could not agree on the spelling of Ptarmigan, they called it Chicken. 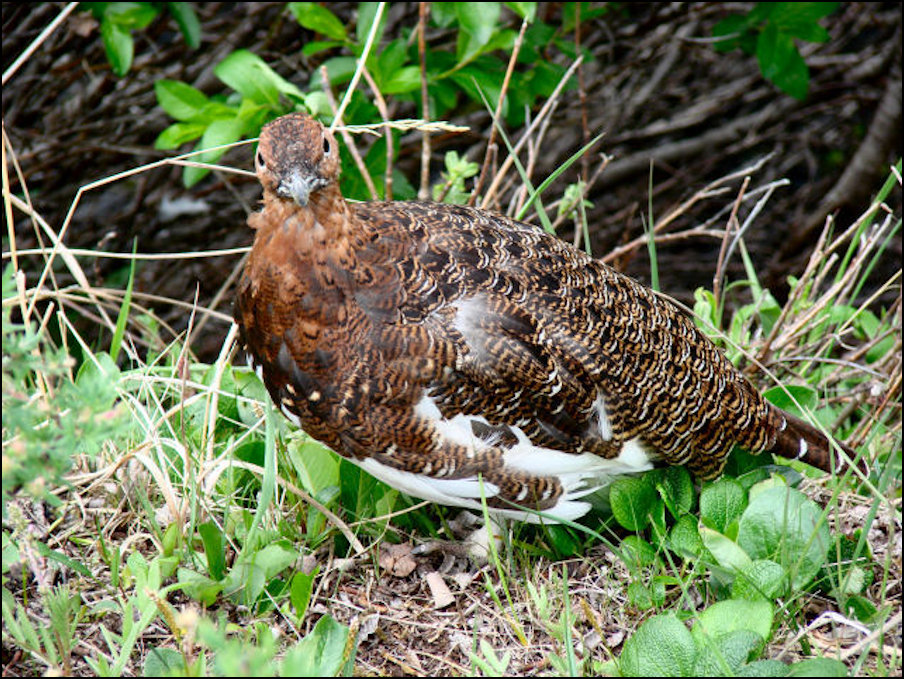 Three Alaskan Marmots entertained us.  Two of them were either fighting or dancing.  From the rear they look like large house cats.

Pete was lucky to snap a photo of this little critter poking her head over the rocks. 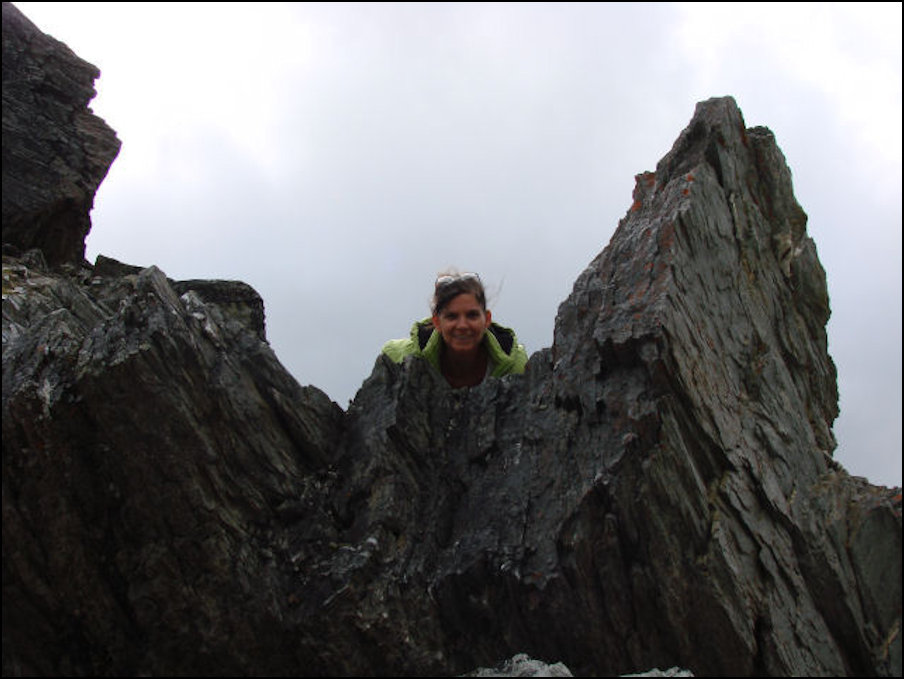 1) Thank you John and Rosie for your friendship.  You are a blessing.  2)  See you all next week in Anchorage. Love, Pete and Ellen