A trip through Canada at the beginning of May is very lonely.  RV parks are very empty, and at two parks we were the only campers.  The towns are little and spaced far apart.  Vancouver area has a million people and Prince George has 70 thousand.  But for the most part, once you leave Vancouver you are on your own, and we love it.  We have heard that by the end of May, the line of motorhomes heading to Alaska will look like a slow moving freight train.  Our 741 miles got us through Southern British Columbia ending up in Dawson Creek, BC.

1) A stop at a rest area just short of the Canadian border is used to get rid of any Canadian contraband, like fruit and shot guns.  2) Welcome!.  Funny, right in front of their catch phrase, "The Best Place on Earth", is a sign that means "Don't stop here!".

British Columbia has 750 Provincial Parks (state parks).  The first you see is Peace Arch Park which spans the border. The arch also spans the border with one pillar in each country.  The arch was dedicated for the 1814-1914 centennial celebration of the end of the War of 1812.  This war pitted England and Canada against the United States.

These tulips are in the huge, Vancouver Stanley Park, with a view of the mountains, across the Burrard Inlet, in North Vancouver. 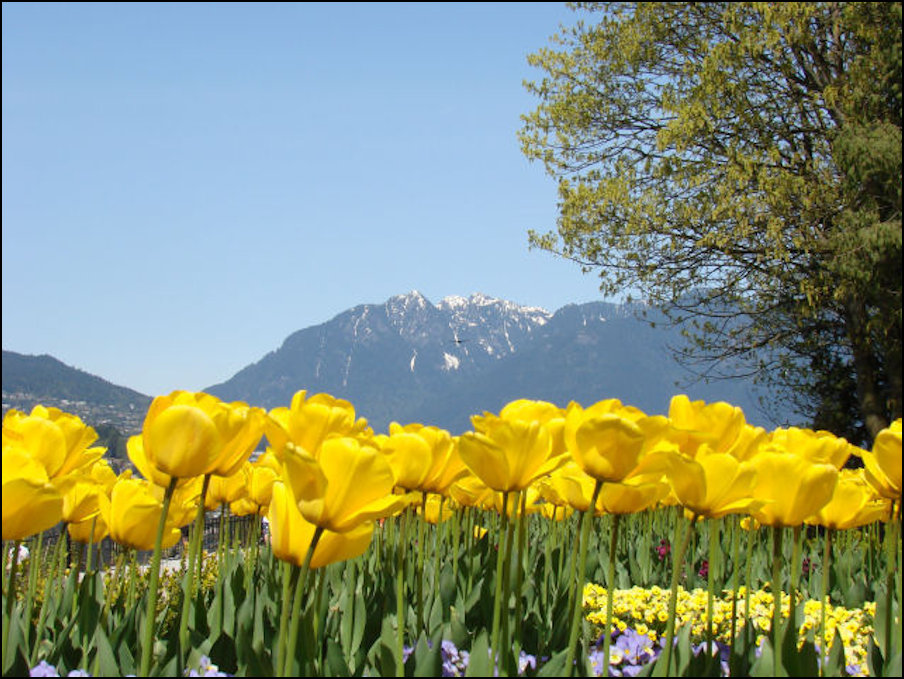 From Stanley Park, you and the raccoon, can see downtown Vancouver.

1) This is Gastown in the city of Vancouver. Gastown is named after its best known pioneer "Gassy Jack" Deighton, who established the first saloon in 1867 on the south shore of the Burrard Inlet.  Gastown is full of historic buildings, shops and restaurants. 2) The city is full of flowers as was Victoria on Vancouver Island, and as are many other Canadian cities.

1) We took the Sea to Sky Highway, the western most route to the North.  We passed through Squamish, Whistler, Lillooet on the way to Cache Creek. 2) The Shannon waterfall is just a few hundred feet from the highway.

1) Squamish is representative of larger towns (10k) that you see along this route.

Whistler is regarded as one of the top four-season resorts in North America.  It will be the site of the alpine and Nordic venues for the Vancouver 2010 Olympic and Paralympic Winter Games.

You pass a lot of water in your travels through Canada.  This lake is typical of the landscaping along BC 99, the Sea to Sky highway. 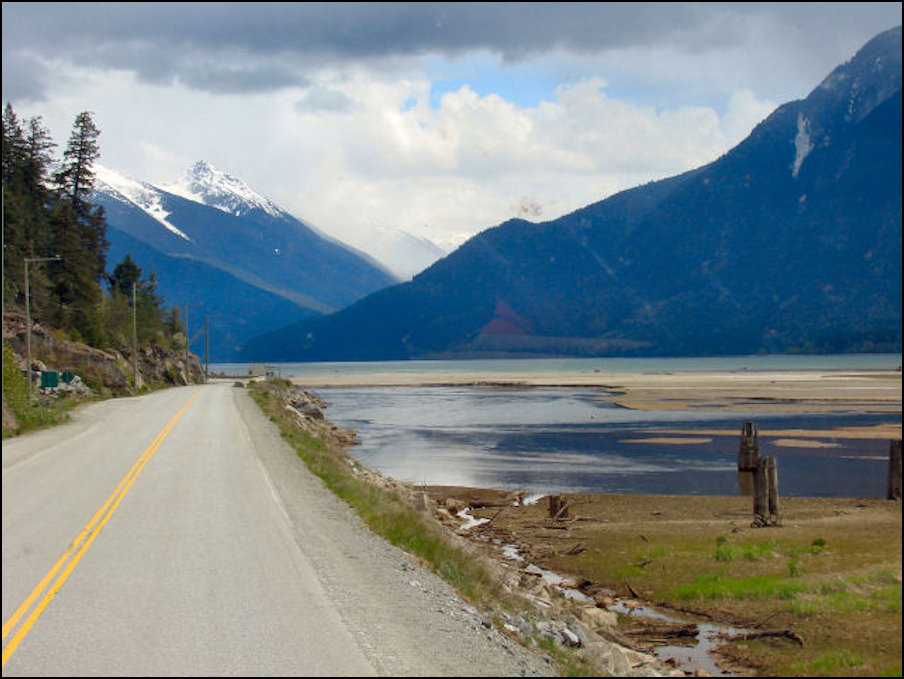 1) Here the highway reaches its acme, between Pemberton and Lillooet.  2) This river was only around 3,000 feet altitude, but was totally frozen over, due to a log jam further downstream.

1) The up and down grades are the steepest we have driven in our 52,000 miles. But the Mothership handled it well.  Easy up and using 1st gear, we cruised down at 15 mph.  That's another good reason to come early with no traffic; there was no one behind us to annoy with our slow speed. 2) The several hairpin turns are really not tight, just go slow.

The highway before Lillooet has a half dozen one-lane bridges.  Again, no problem in early May.

Seton Lake, just before the BC-99 ends at the BC-12, is a beautiful turquoise color. 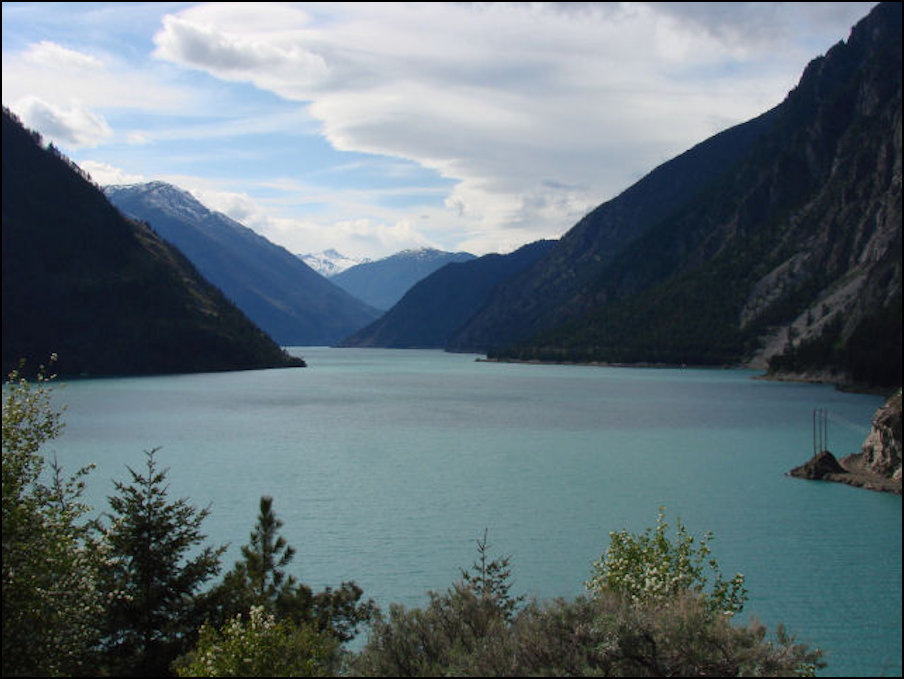 Now these are tight hairpins!  This very nice Fraser Cove RV Park is for tent campers, vans and small motorhomes.  But is has three sites large enough for us.  We needed to make a three-point turn to get down the hill and another to exit our site when we left.

The RV park borders a rocky and sandy section of the Fraser River. 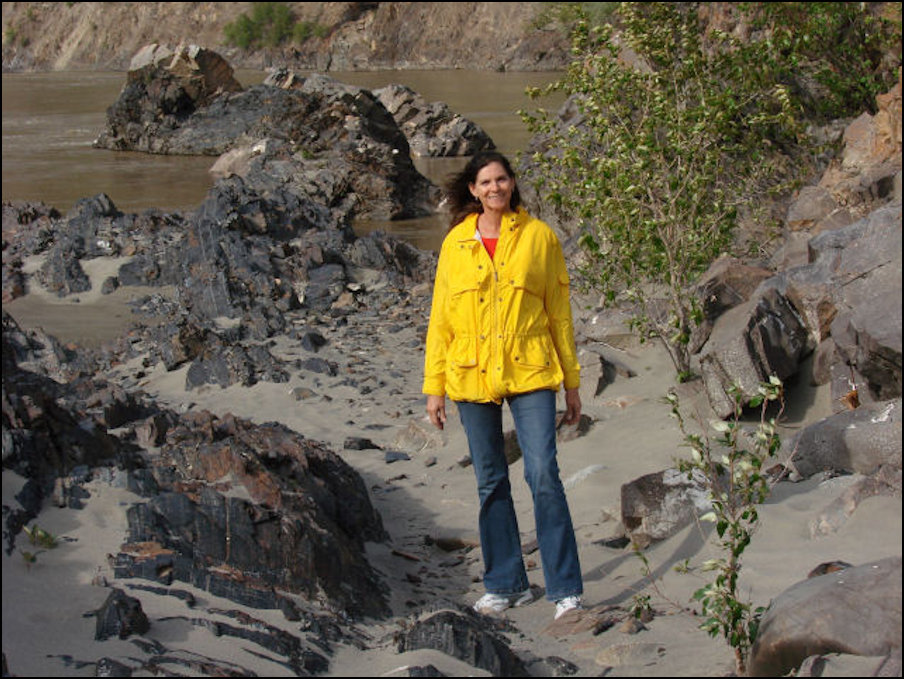 This is Lillooet. The Reynolds Hotel and the Mile 0 Motel.  Lillooet was founded during the gold rush of the 1840's.  Its population swelled to 15,000 within 20 years. That would make it a very large town in current day BC.  However, as the gold supply waned, the town did also, with a current population of 2,779.  It was originally known as Mile 0, as it was the base town for surrounding gold fields.  The towns that sprung up after Lillooet were named in reference to this marker.  We passed through 59 Mile House, 99 Mile House and 100 Mile House and the 108 Mile house.  These house/town names seem a bit ironic in a country that uses kilometers on their road signs :-)

The Old Bridge was a short walk from Fraser Cove RV Park.

From Lillooet we continued on BC-12 toward Cache Creek.  This railroad bridge was just a 1/4 mile north of our park. 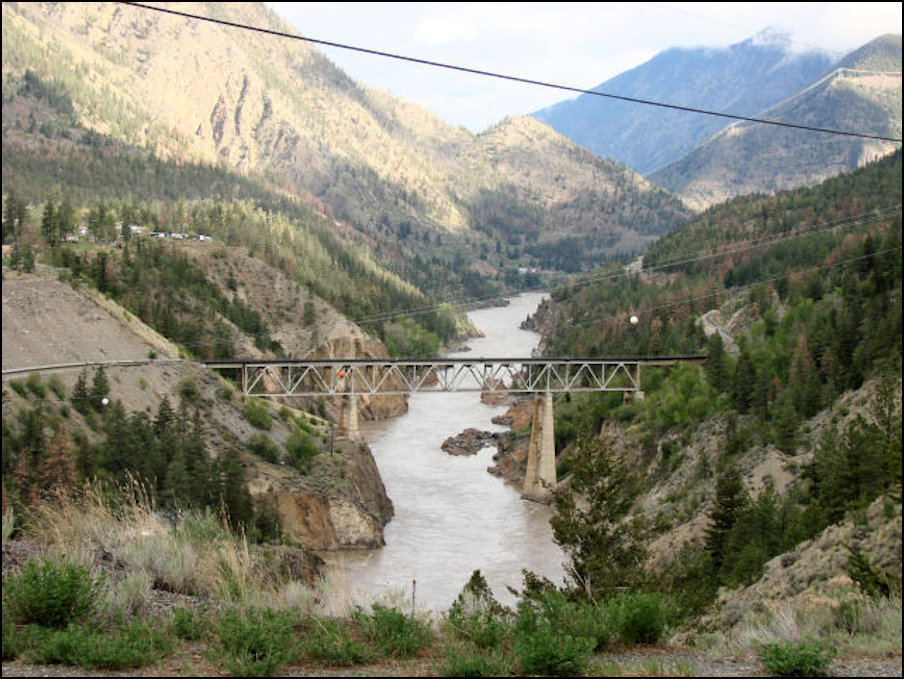 Ellen took this photo of the Fraser River at 9:00 am.  The sun made the river so bright that the camera darkened the river banks even though they were totally lit up as well. 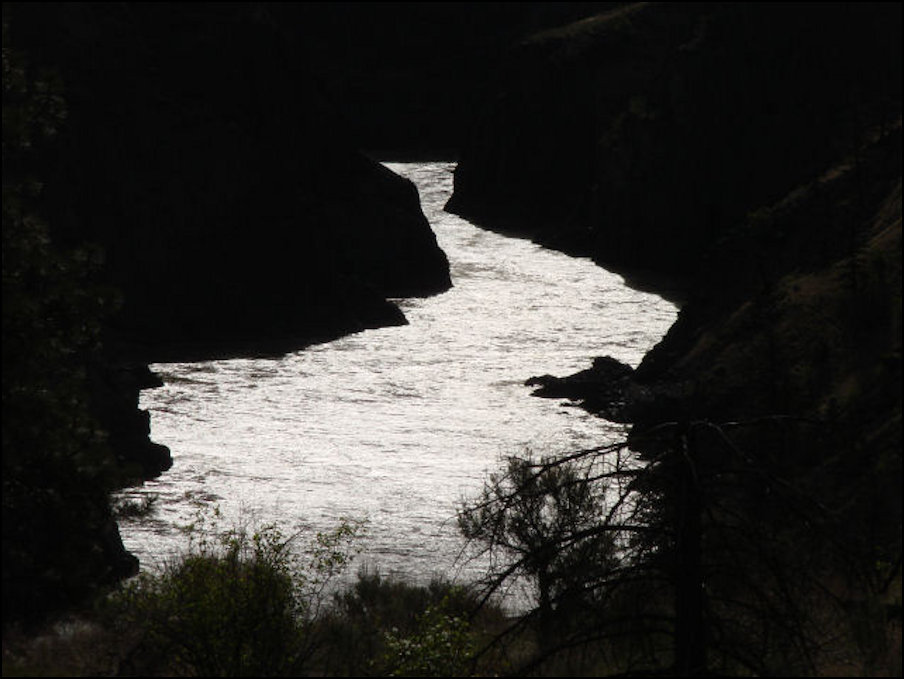 The BC-12 carries you through a much more arid Canada than did the Sea to Sky 99. 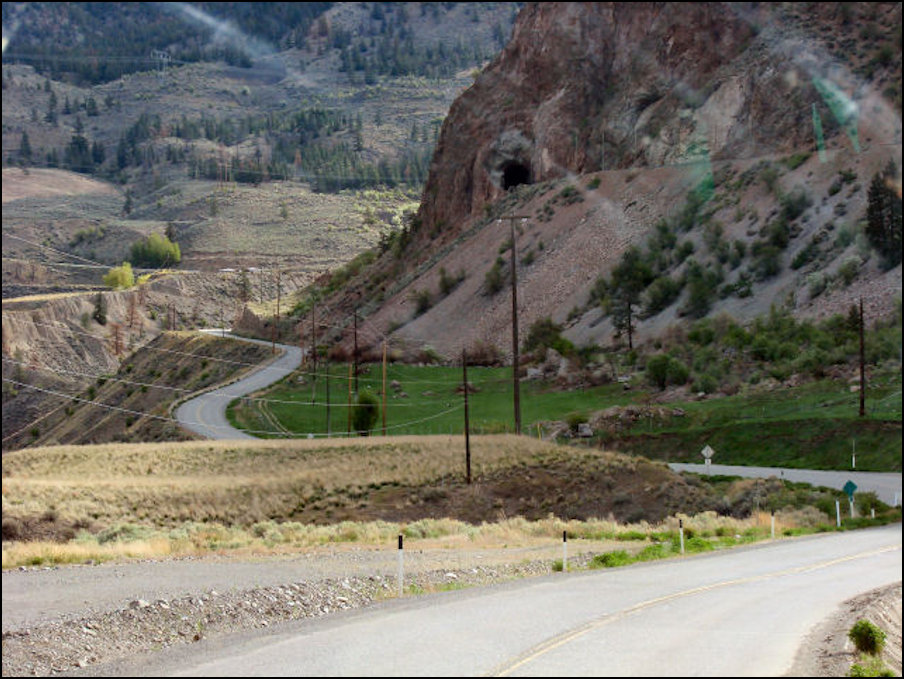 The waters of Pavilion Lake, in Marble Canyon, are a beautiful turquoise. 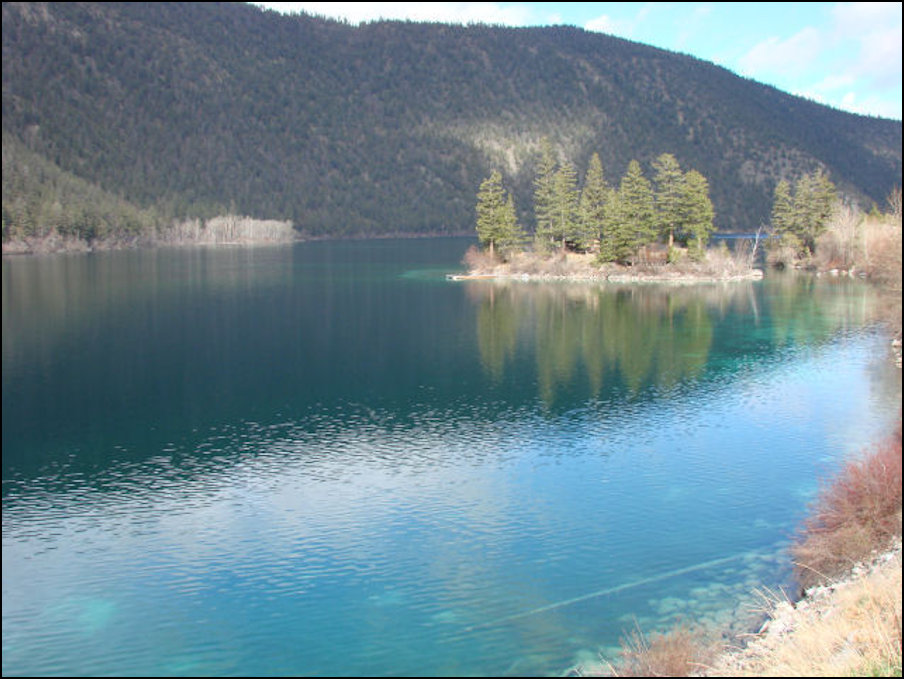 This would make for a great picture jigsaw puzzle. 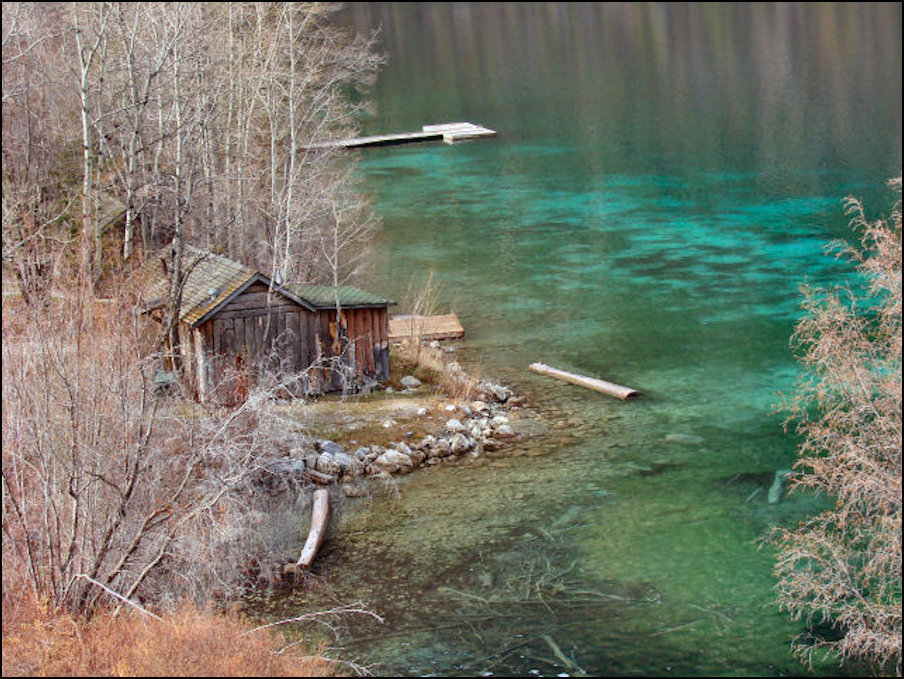 Our Milepost almanac stated that Cache Creek had stores and fuel and fast food.  As our futile search for Jack in the Box ended, we fueled for $2.86 (USD) per gallon and headed north.

We settled in at McLeese Lake Resort. Owned by Christians, it has a cute little chapel, motel, cabins, boats and RV sites right on the lake.  We were the only ones there the first night, then joined by one other Alaska-bound couple.  This park, as well as all others this week, had WiFi at the RV sites.  This was good news as there was no cell phone service.  But with WiFi Pete could still support his clients.

This landscape is typical of the drive from McCleese Lake to Prince George.

Quesnel (pronounced kwe-NEL) was a bit wet as we cruised through.  Prince George is big at 70,000 people.  We shopped at Costco and had the generator serviced at Freightliner.  We had expected to do a lot of dry camping, but none so far.

1) Hartway RV Park in north Prince George has 40 sites, and the owners, Jack and Robin, have a house on site.  It has the best WiFi we have ever used; fast and never faded out.  2) We saw a lot of dead looking trees along the highways in this area.  These are Birch trees and they are just getting their annual buds.  When we return in August, this picture will look vastly greener.

1) One of the very few stops between Prince George and Dawson Creek is Whiskers Bay store.  2) The BC-97 highway follows the Crooked River for many miles.  This section is mostly frozen.

These are the Canadian Rockies.  The road is only at 3,000 feet and the Crooked River is totally frozen here.

1) Chetwynd BC bills itself as the Chain Saw Sculpture Capital of the World.  We did not stop but we saw a lot!  2) Arriving in Dawson Creek, we stayed at Northern Lights RV Park.  On the way we traveled through 24 miles on BC-97 with signs that read "Watch for Moose".  But alas, no moose yet.

We went 741 miles this week, but still have 1,462 to go to reach Fairbanks.  By the time we reach Fairbanks, we will have traveled further from Atascadero than we would have if we had driven to New York City!.

We are 1 mile from the start of the World Famous Alaska Highway.  Yeehaa, we are ready to go.

Happy Mother's Day to Harmony, Jen and Sonya and to all the rest of you very deserving moms. 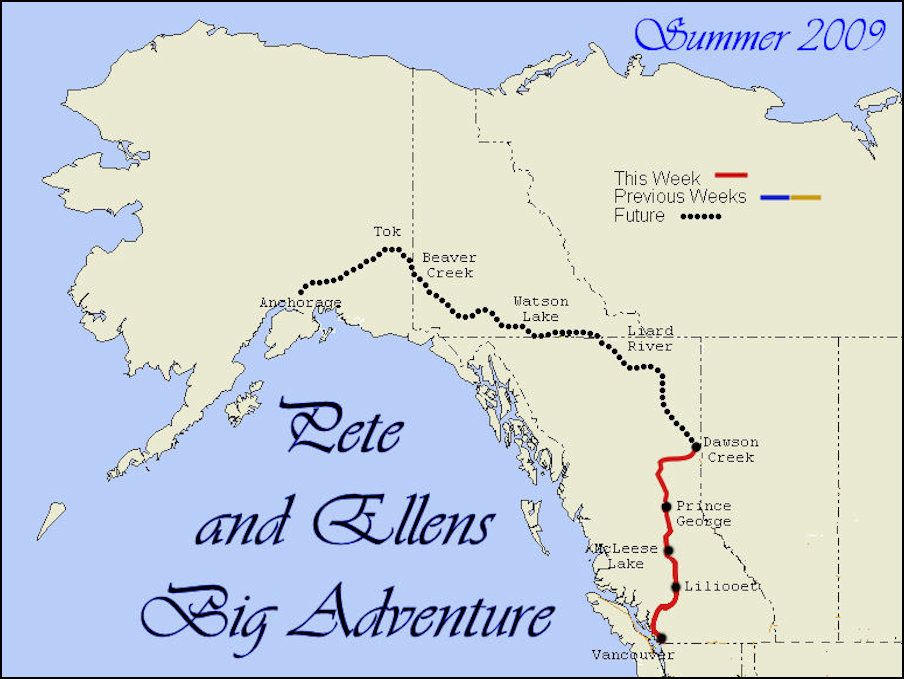 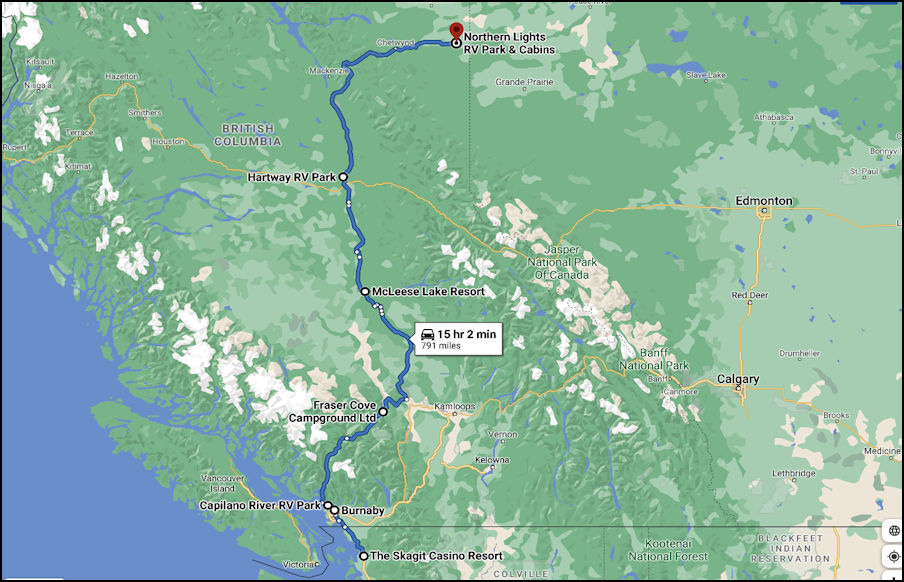