After a fun trip up Highway 49 we settled in at Emily and Chad's home. With 50 amps, water and sewer (hey, where's the cable TV?), we could live here! We were ready for great fellowship, playing with the grand kids, nightly card games and of course some new construction projects. 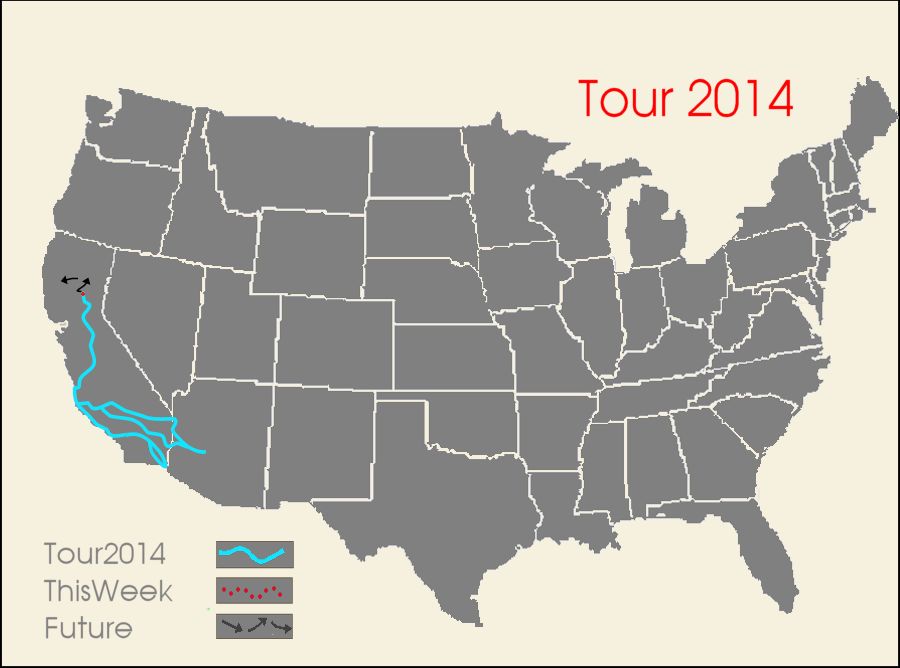 The project this trip is to extend the gable roof over the front door. It will cover the deck that will come in the future. Pete climbs the ladder to remove the existing fascia boards.

Since we didn't have a transit we could not start from a level site on the ground. So the decision was made to build the cover from the roof down. We began by attaching 2 x 6's to the existing fascia.

"Dad, I'll be ready to help after I finish these seeds". 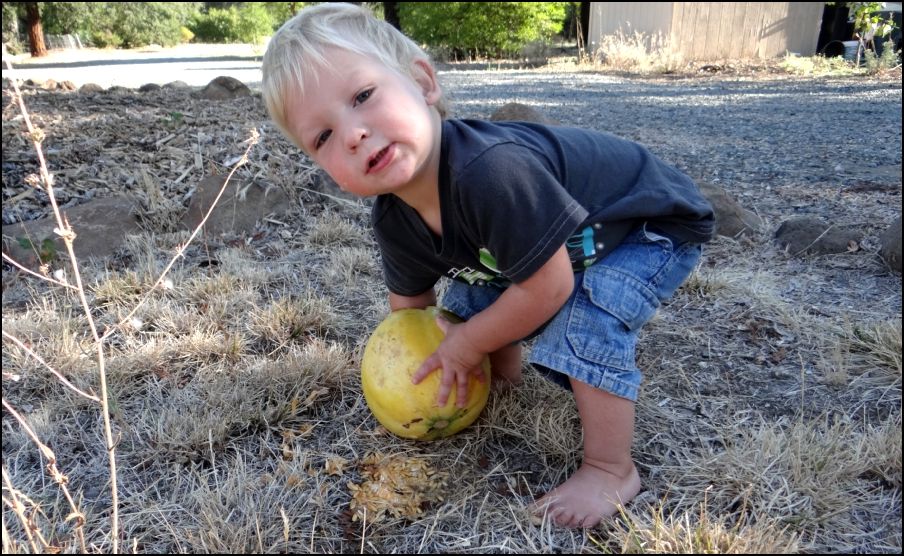 Once the two rafters were attached to the house, two temporary cross beams were added to form the perfect roof shape. A second rafter shape was built in the same image and the two connected by three ridge beams. As we thought that we would have to lift the new roof in place from the ground level and on ladders, only this minimal structure was assembled. 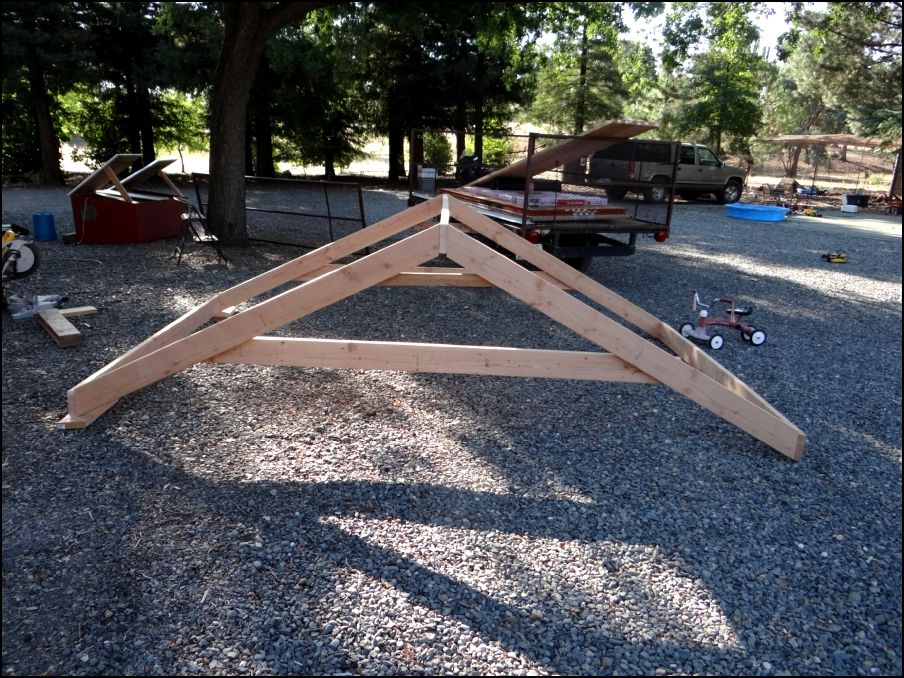 Next preparation to install the roof was to dig two footings to attach the support posts. It would not matter if they where at a different heights as the future deck will cover the footings.

1) Zeb takes time out from playing to air up the trailer tires. 2) He watches as cousin Holley and sister Micah remove the splinters from the building materials. Ouch!

As Pete gets up late, Ellen had time to climb up Steamboat Rock ridge and get these early morning photos.

1) One more rafter was added to the roof structure as it would be needed to attach to the posts. 2) The footing cement with the hangers cures. 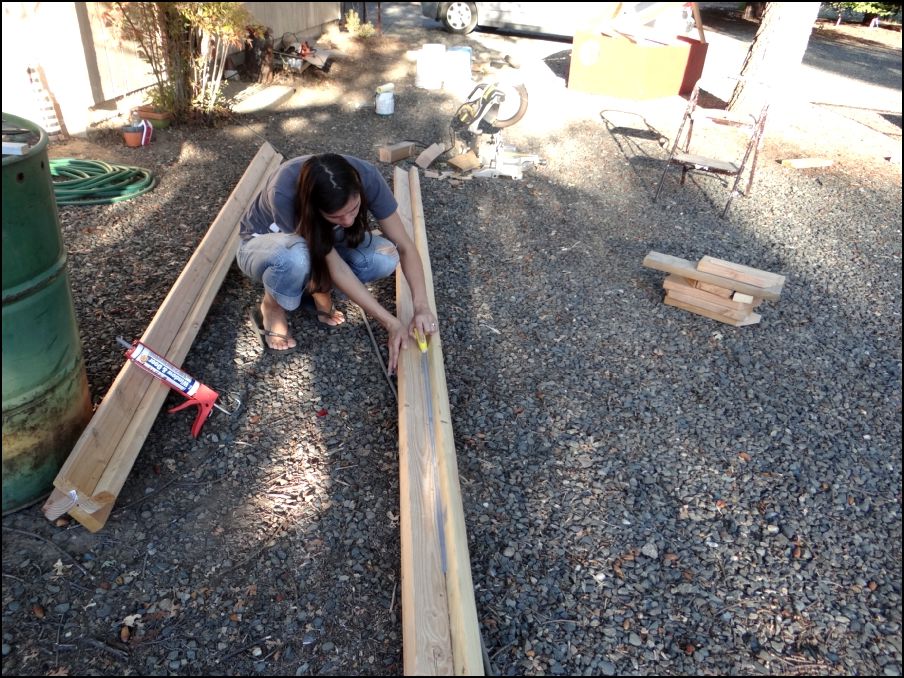 Chad paints the ceiling panels to match the house as Em and Dad slather the posts with white paint.

Surprise, surprise! Chad's brother-in-law Joey brought over this lift to hoist the roof into position. What a blessing! While we would have completed the job on ladders, the lift made it easy, safe and fun.

With the roof attached to the house, Em and Chad wait on Pete and sister Donnalee to cut the posts to length.

Remember that the footings were installed without knowing their elevation? Amazingly both posts were exactly the same length? Thank you Lord. The posts are secured with the footing hangers and at the roof with special brackets made by Chad's father Steve. 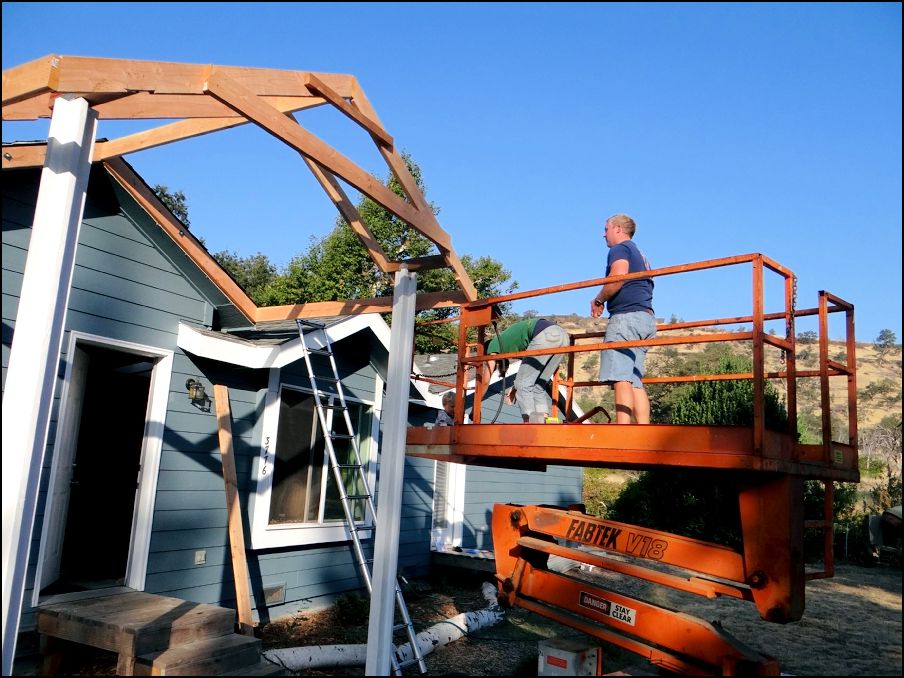 Now that the roof is up and level and the posts are in place, Emily and Chad secure everything with screws.

Next the roof sheeting gets screwed down and brings shade from the 100 degree heat.

Chad cuts the final pieces of sheeting. Chad and Emily work together on these projects and both really enjoy building; that makes it fun. 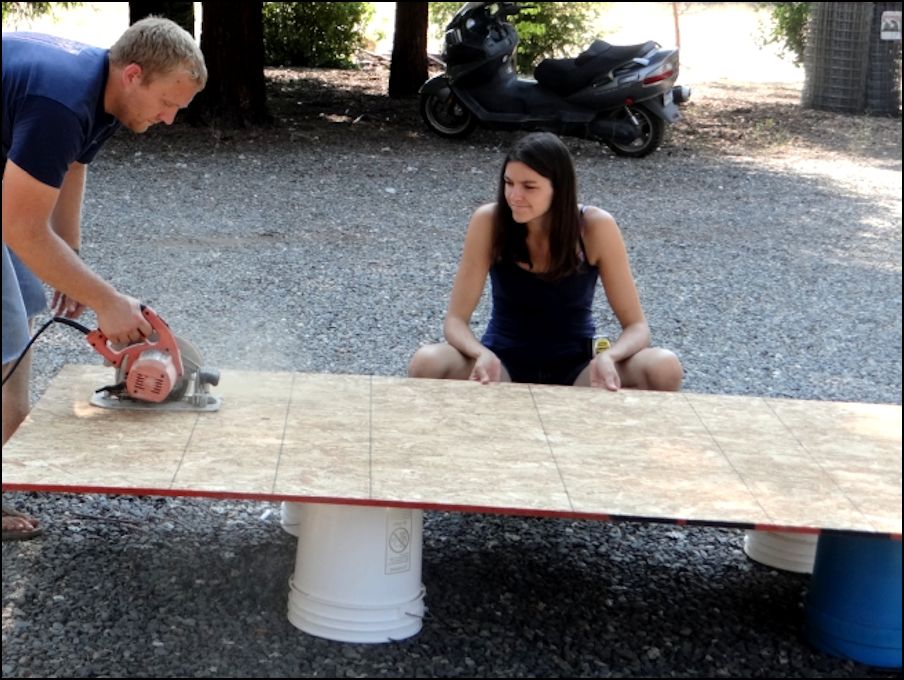 The sheeting is down and the roofing paper gets stapled into place.

It was very tricky working from the roof down. But the most intricate part of the project was notching out the ceiling panels to exactly fit around these unique cross-shaped posts. Measure many times; cut once! 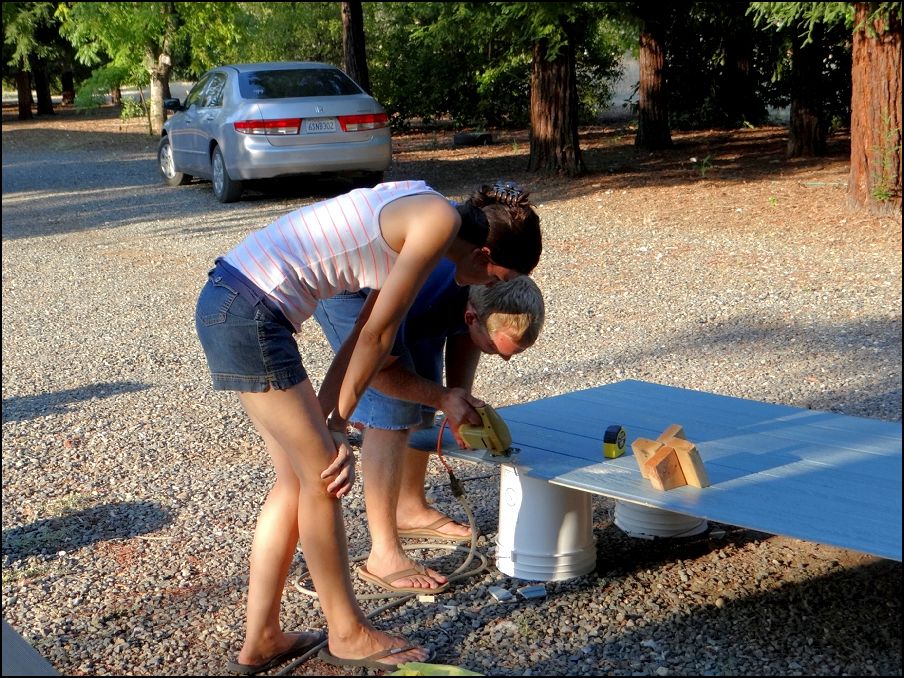 The shingling job moved faster because Joey also had an air-gun. When the air compressor failed, we thought we would have to continue with hammer and nails. Enter Mothership, stage left: Pete remembering the air system on the RV, we were able to use the motorhome's air tank to power the gun and finish in style.

Glory be to God, the cover is gorgeous. It will be shade in the summer and protect from rain in the winter. We neglected to mention the cross beam. With this beam in place the structure is incredibly solid. Before it was in place, you could easily push the roof side to side. 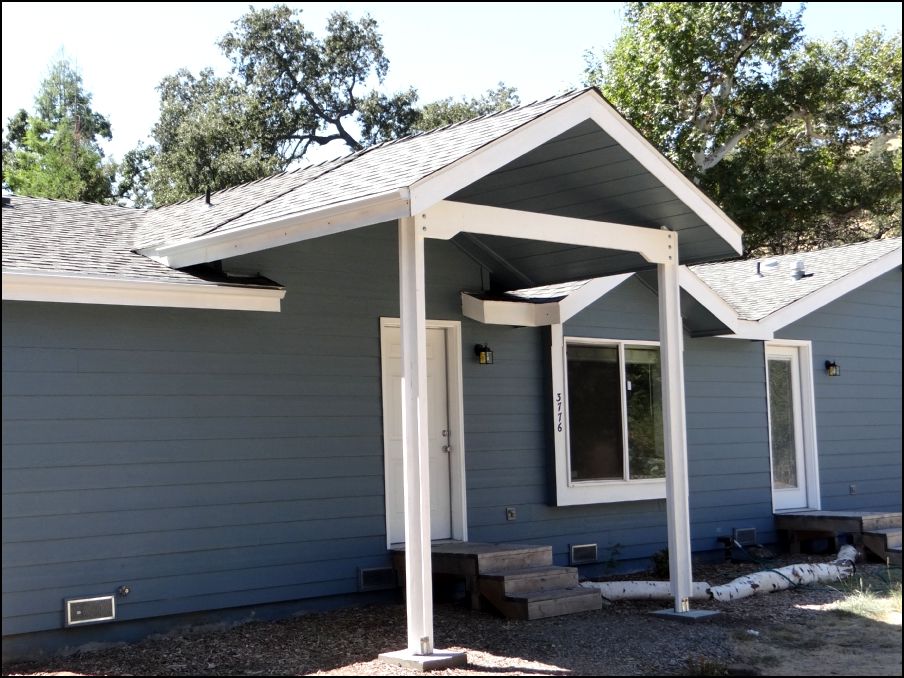 Look at the exacting workmanship in cutting out the panels for the posts to pass through. Nice job Emily and Chad. 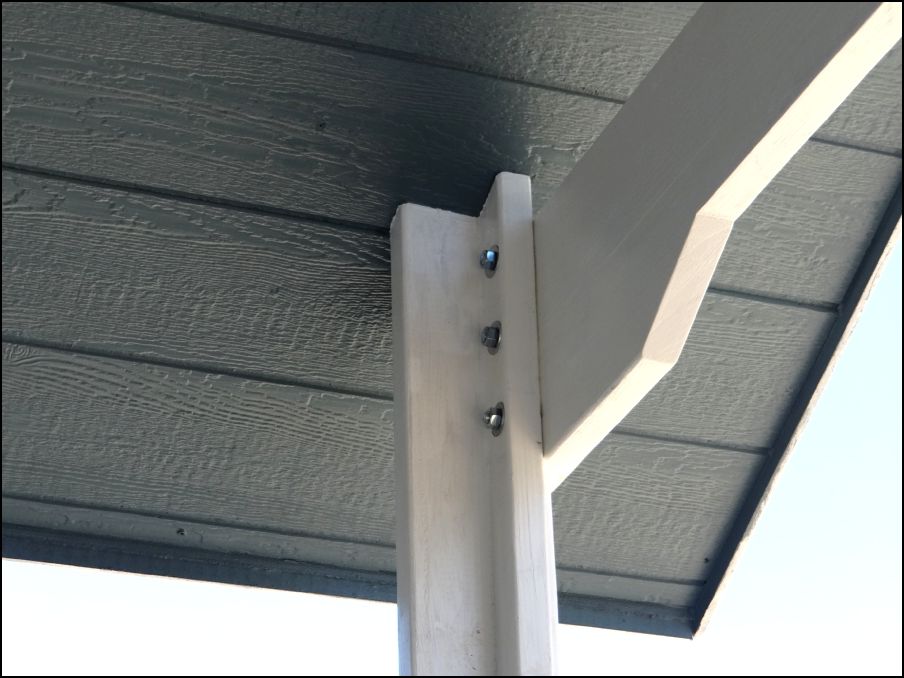 The proud parents pose under the new cover as Grandpa thanks Zeb for all his help. Mandy could give a whip!

Next week we move out and head to Lassen Volcanic National Park.