In April 2011, in the travelogue for Weeks 243-244, we traveled California's Highway 49 from Grass Valley south to it's end at Oakhurst. That section of 49 is known as the Gold Country Highway. As promised, we said we would someday report on the remainder of Hwy 49 from Vinton to Grass Valley.  We have, and are happy to bring you California Hwy 49 Complete; Vinton to Oakhurst. 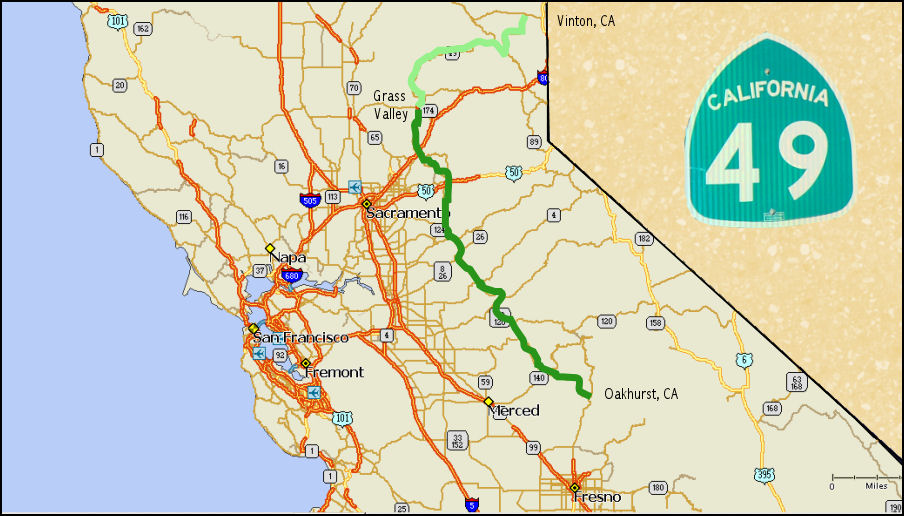 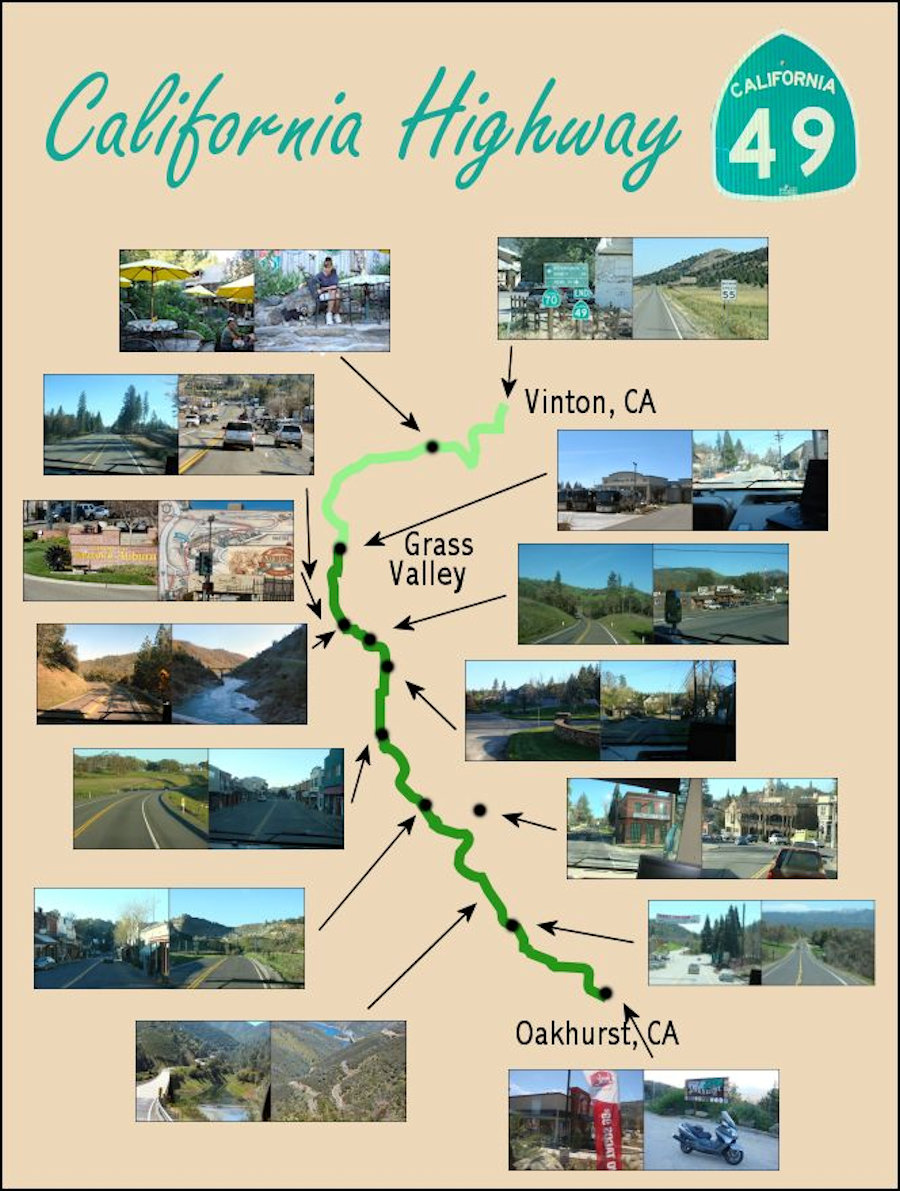 Starting in Vinton, Calfornia, Highway 49 is not impressive.  You would never know how incredibly beautiful it gets as you head south.

As you progress, you drive up into the Sierra Nevada Mountains.  It is quite beautiful as you look back at the Sierra Valley you just drove through. 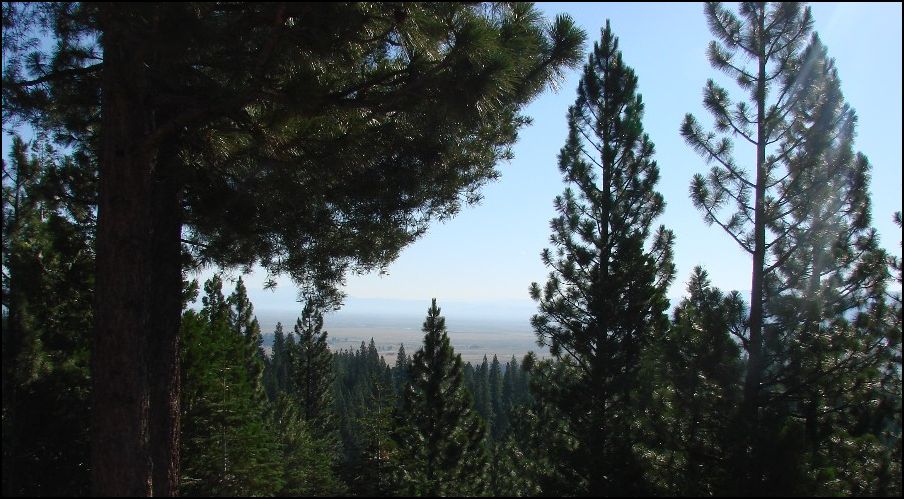 1) From this point on, all the way to Oakhurst, Highway 49 is fabulous. 2) Mandy perked up at Sierra City. It is a darling little town that now survives on tourism.

1) We were sure that Mandy was taken by the Country Store, but 2) later found out that she just wanted to meet new friends in the middle of the highway.

1) Sierra City was established in 1850. The town straddles Hwy 49 with only a few side spurs.  This new welcome sign highlights coming events. 2) A rare car in the distance let's Ellen know that walking down the middle of 49 should temporarily be avoided.

Mountain Creek Restaurant was fabulous. Buried into the hillside, the outdoor seating was great; Mandy was welcome, and a waterfall provided beauty and "white noise". The food was reasonably priced and good!

Our site wedged between the trees at Sierra Skies RV Park.  Just a hundred yards down the hill you are treated to the Yuba River.

Okay, time to leave, really! We never would have gotten out (or in) in our early years of RVing. But, with 5-point turn, it was no problem!

Sierra City was tiny. No doubt their citizens would head to the bigger city of Downieville for groceries and other items. The big city had a 2010 population of 282.  The downtown was darling and no problem for the Mothership as there was no traffic. It would be tight to pass a car here, but with 282 people, it probably does not happen often. 2) The highway continues with wonderfully negotiable turns and forest views.

While the GPS shows a twisty drive, there are actually very few tight turns and easy, even for the biggest of rigs.

As you approach Nevada City the road is fast and straight, and even becomes four lanes.

1) When near, we always visit DeMartini RV in Grass Valley.  We purchased the Mothership from them on 4-5-6 and it is always a pleasure to revisit. We stop and say hello even if we don't need any service.  Service manger Kevin and his crew have always taken wonderful care of our home. As you can see DeMartini's facility is top notch and they have more Class A (big rig) motorhomes on their lot than any other dealer that we have seen in our travels.  This includes the RV Snow Bird dealers in Arizona. So many of the motorhome dealers closed during the economic downturn, but DeMartini is flourishing with eight service bays that are never empty.

Two days is way too short to visit the towns and sites from Grass Valley to Oakhurst.  Much of the road is a slow-go with lots of 15 mph turns and narrow passages.  It may not be a road that many RVers would want to travel, but we wouldn't have missed it.  Prior to our big motorhome adventures, we had visited many of the historic sites and thus this trip was just an alternate route to the boring freeways.

1) Highway 49 south of Grass Valley starts as a very peaceful drive through the mountains. 2) But in 20 miles you reach Auburn, a community of 13,330 (2010 census). This section is new, busy and not that attractive.

1) But Old Town Auburn is very quaint and nicely maintained. 2) Who needs a GPS when you can just follow the map on the wall?

Leaving the south end of town on 49, you leave behind the bumper to bumper traffic and cross over the South Fork of the American River.

Oh yeah, the first five miles of this road are very twisty and fairly narrow.  Not a good road to be on at 5 pm where the local rural residents are trying to get out of Auburn back to their homes.  Yes, we knew this, but our timing could not be helped. So again on this road, it was bumper to bumper, but being the big heavy kid on the block, we had no one in front of us, only a few frustrated drivers behind. There are a few turnouts, which we always use, to let drivers pass.  Some send a wave of thanks and other shrug their shoulders asking themselves, "why would anyone drive a motorhome on this road?".

1) Soon, and for most of the rest of 49, you are treated to God's gorgeous landscaping along the road.  2) This is Coloma, the town closest to Sutter's Mill.

1) Not everyone cares that much about the history and would rather be paddle surfing on the South Fork.  2) Site of Sutter's Mill where California gold was first discovered on January 24, 1848.  This discovery lead to about 300,000 people pouring into sparsely populated California to mine for gold.  Ah, to pine for the days of a sparsely populated California.  Most of these would be miners who came in 1949, which is why they were call the 49ers and where the highway got its moniker.

Historic buildings like this dot Highway 49 all along your travels.

Placerville, a peaceful little town of 10,389  (2010 census). An illustration of the the impact of gold mining on California, is the fact that when Placerville was incorporated in 1854, it was the third largest town in California. This town was not always so peaceful. Here is an excerpt from Wikipedia.com. "After the discovery of gold in nearby Coloma, California by James W. Marshall in 1848 and the sparking of the California Gold Rush, the small town now known as Placerville was known as Dry Diggin's after the manner in which the miners moved cartloads of dry soil to running water to separate the gold from the soil. Later in 1849, the town earned its most common historical name, "Hangtown", due to the numerous hangings that had taken place there. By 1850, the temperance league and a few local churches had begun to request that a more friendly name be bestowed upon the town. The name was not changed until 1854 when the City of Placerville was incorporated. At its incorporation, Placerville was the third largest town in California. In 1857 the county seat was then moved from Coloma to Placerville, where it remains today."

All the pavement of Hwy 49 (at least in our memory) is in good shape.  So while the road can be slow and twisty in the most beautiful sections, the entire road is a pleasure to drive.

Coming into Jackson, California we stopped for our first night. Since we had left Grass Valley at 4:30 pm, we wanted to get to Jackson before dark and did not stop. The 80 mile section took 3 hours with no stops.  This would be much better as an all-day trip with many stops at the historical sites.

1) The second day we got an early start at 7:00 am, passing through Angel's Camp and 2) a beautifully sculptured rock quarry.

You will pass by rivers and lakes on this drive. This is New Melones Lake at the scenic viewpoint. 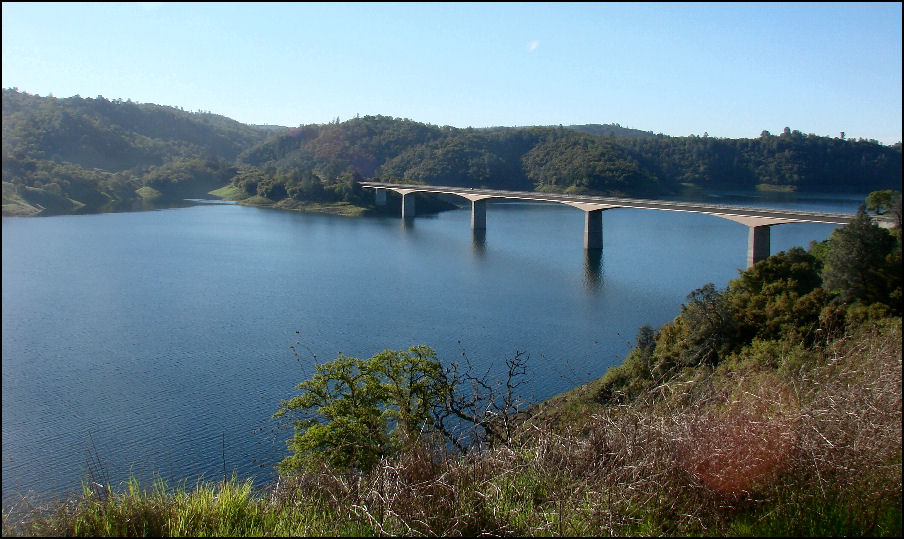 Occasionally, the Mothership, wants her photo. After all, we wouldn't be here if it wasn't for her. 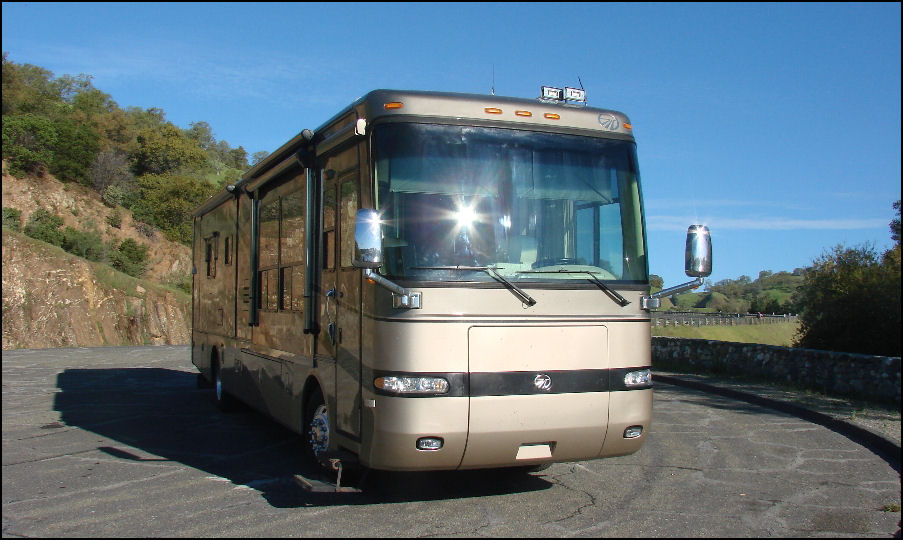 1) Columbia State Park is the best preserved of all the Gold Country towns. It includes 30 buildings built since 1850 when gold was discovered there. While we visited on a Tuesday in April, 2011, it was a ghost town. You will want to visit in the summer or on a weekend.  Then, it will be full of people and happenings. The shops and street vendors will be open, there will be people dressed in period costumes, horse drawn carriage tours and many special events.  It is a truly authentic representation of the late 1800's.

2) Sonora is one of the larger towns along the 49.

1) One of the hundreds of old buildings along the way.  2) Don Pedro Lake.

While we have been on highway 49 in our car a few times, we realized that we had never been on this part.  We had always bypassed it by going through Yosemite National Park which is to the east of this section of the road.  There were only a few cars on the road and dozens of great places to stop. 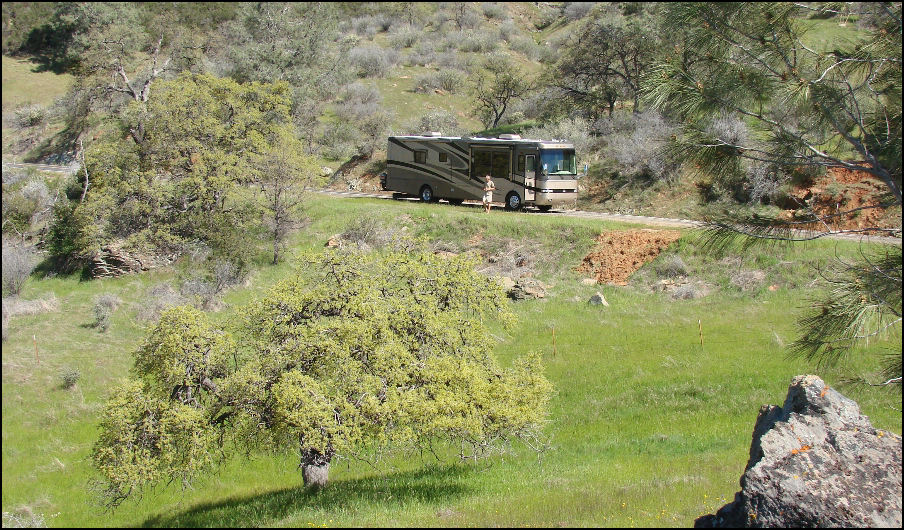 Yes, this is a fabulous motorcycle road. White-knuckle motor-homers beware!

1) The cyclists were enjoying this ride between Bear Valley and Mariposa.  2) Too bad it was a Wednesday as "weekends are made for Mykleoaks!"

The last leg of our trip took us through Mariposa and we could see snow in the distance.

And finally we are rewarded with Jack as we arrived in Oakhurst.  Some of our RV friends wonder why our average speed for the last 5 years has been 38.5 mph. Here is why. This day we covered 126 miles in 5 1/2 hours (average 22.9).

Highway 49 is one of the fabulous drives in America.  There are many more, we have brought you some and we will bring the rest in time.

Have a wonderful week, with love, Pete, Ellen and Mandy.